Study on compressing principle of the fresh municipal solid waste

Copyright © 2019 Yongneng Lu, et al. This is an open access article distributed under the Creative Commons Attribution License, which permits unrestricted use, distribution, and reproduction in any medium, provided the original work is properly cited.

China’s urban waste production was increasing at an annual rate of 8 % to 10 % in recent years. Finding a proper way to dispose of municipal solid waste has become an urgent problem for urban development [1]. Driven by national policy and rigid demand, total amount of the sanitation market will maintain a rapid growth of more than 20 % in the next five years. And with the improvement of people's awareness of energy conservation and environmental protection, compression garbage trucks with hermetic, self-compression and large loading capacity are more and more accepted by the public, and their occupation rate in garbage trucks will increase gradually.

Fresh MSW consists of many different components, including waste paper, vegetables, peels, wood, grass, leaves, textiles, bones, plastics, rubber, metal, brick, stone, earth, ceramics, glass, and so on. In addition, the water content is also very large. These ingredients are usually porous and unsaturated, which have a significant impact on the engineering properties of domestic waste [2, 3]. Zhang et al. [4] conducted a combined compression and direct shear test on fresh domestic waste, and studied its strength characteristics under different compressive strains systematically. Zhang [5] used the unidirectional compression test and the direct shear test results to propose a simplified calculation method for the Duncan-Chang model parameter of the garbage, and obtained the Duncan-Chang model parameter of the garbage.

Until now, domestic and international scholars proposed countless soil constitutive models, and the Duncan-Chang model is one of them. In the conventional triaxial test, the axial stress is applied when the is unchanged. At this time, the stress increment is applied in only one direction, and the stress increments of the other directions are unchanged. The Duncan-Chang model starts from this point [8]. The model is a nonlinear elastic model based on the incremental generalized Hooke’s law. It can reflect the nonlinearity of the stress-strain relationship with only 8 parameters, and every parameter has clear physical meaning, so it’s easy to grasp. It can be determined by static triaxial test, and is easy to be used in numerical calculation, therefore, it has been used widely [9, 10].

Fig. 1. The relation between and 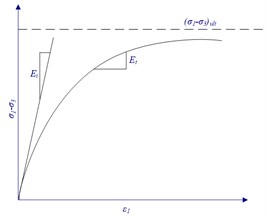 Fig. 2. The relation of and 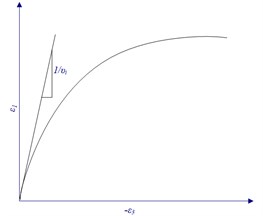 To summarize, the eight parameters of Duncan-Chang constitutive model are cohesion , internal friction angle , damage ratio , elastic modulus coefficient , elastic modulus exponent , undetermined parameter of the tangent Poisson’s ratio , and The Duncan-Chang constitutive model parameters are generally obtained through triaxial tests. But maintaining confining pressure in triaxial test device is very difficult and needs lot of auxiliary devices. Meanwhile, almost all scales of triaxial test devices are small, and they are not suitable to conduct garbage compression test due to uneven composition. It’s difficult and costly to develop large scale triaxial test devices. Zhang [5] proposed a simplified calculation method, in which Duncan-Chang model can be put out by the results of direct shearing test and the axial direction compression test.

The direct shear test is a common method for determining the shear strength in soil mechanics. The shear stress at the horizontal plane failure can be obtained from horizontal shear force to the samples under different vertical pressures. And cohesion , internal friction angle can be calculated further according to the Coulomb strength theory. According to Zhang’s suggestion [5], we used the slow shear test of the direct shear test, and cohesion , internal friction angle were taken as the parameters of the Duncan-Chang model when the shear strain reached 10 %. The relation between normal stress and shear stress is shown in Coulomb equation Eq. (3): 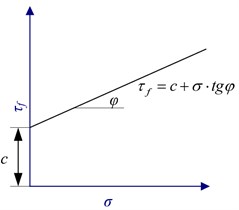 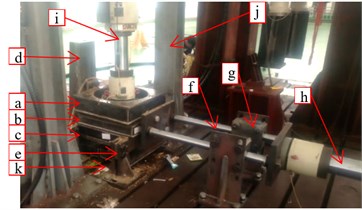 A large-scale test device was needed, so inner diameter of the test device was set to 500 mm. The container of traditional direct shear device is generally composed of two parts, one shear surface, which needs to overcome the friction of the sample and the weight of the counterweight. In order to improve the accuracy of the shear test, the container we designed was divided into three parts: upper, middle and lower parts. The shear force is applied to the middle part to achieve the shear of the sample. The upper and lower buckets were fixed completely, while the middle bucket was connected to the horizontal hydraulic actuator through the horizontal slides. Vertical pressure was provided by the vertical hydraulic actuator and horizontal shear is provided by the horizontal actuator. The fresh MSW has a large water content, and a large amount of sewage was continuously discharged during the compression process. So some holes with diameter of 5 mm were arranged at the bottom of the lower bucket for the sewage discharge to sewage tank. The special direct shear device is shown in Fig. 4.

Take the logarithm of initial elastic modulus on both sides: 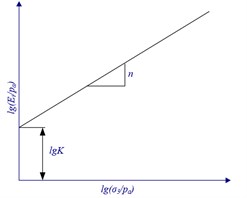 a) The relation between and 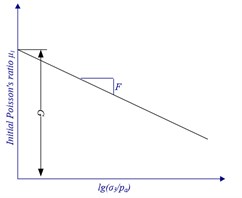 b) the relation between and 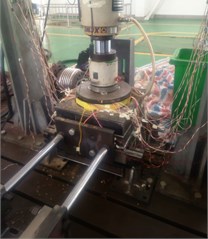 a) Overall view of the confined test device 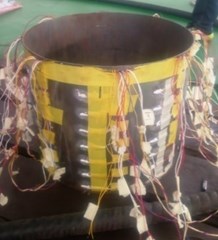 b) Strain gauges on outer surface of thin-walled bucket

Confined compression test device was reformed on the basis of the direct shear test device. The upper bucket, middle bucket and lower bucket were kept aligned vertically, and the horizontal actuator was locked. Another thin wall bucket with inner diameter of 476 mm, height of 500 mm and thickness of 2 mm was laid in bucket to conduct the confined compression test, as shown in Fig. 6(a). Seven rows and eight columns of strain gauges were arranged on outer surface of thin wall bucket, and their direction is the circumferential tangential direction, as shown in Fig. 6(b). In the compression process, V402EX wireless dynamic strain test system was used to monitor the microstrain value of each strain gauge, so that the circumferential tangential stress can be obtained as shown in Eq. (5):

where, is the elastic modulus of the thin-walled bucket.

Since the wall thickness is much smaller than the radius, the relationship between the circumferential stress and the internal pressure of the thin-walled bucket can be obtained according to the elastic mechanics equation Eq. (6):

where, and are inner diameter and wall thickness of the thin-walled bucket.

Therefore, the confining pressure can be derived as Eq. (7):

In this way, the confining pressure of the garbage can be derived by the microstrain values of these strain gauges.

The direct shear test data was processed according to Eq. (3), and the points of normal compression stress and shear stress are plotted shown in Fig. 3. The straight line was fitted to obtain the internal friction angle and the cohesion .

According to Feng’s research [11], the damage ratio of garbage increases with the axial strain. Meanwhile, it is recommended to take 10 % as damage standard of the garbage, and take the damage ratio 0.55 without triaxial test data. The final Duncan-Chang constitutive model parameters of the fresh MSW were taken the average, as shown in Table 1.

Table 1. The final Duncan-Chang model parameters of the fresh MSW

Simulation of the confined compression test was conducted based on the Duncan-Chang constitutive model in Section 3.2. The inner diameter and height of the thin wall bucket are 476 mm and 500 mm respectively. Axisymmetric model was adopted, and a forced displacement was applied on upper boundary of model, as shown in Fig. 7. Because the stress of garbage is uniform everywhere in the whole model, the garbage can simply be set as one material instead of extracting stress from each element, recalculating its elastic modulus, Poisson's ratio and updating material properties. Therefore, simulation of the confined compression test becomes very simple at this time. 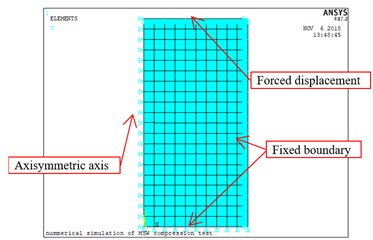 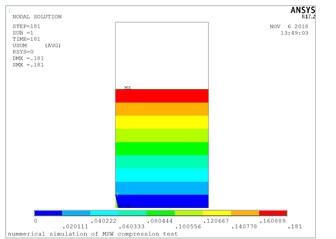 Fig. 9. The average pressure along the displacement curve of five tests of the fourth batch and simulation 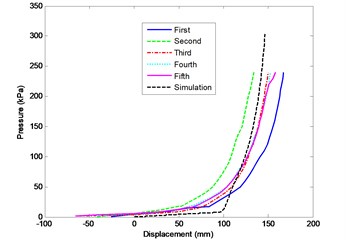 Fig. 10. The elastic modulus of the garbage changes with pressure 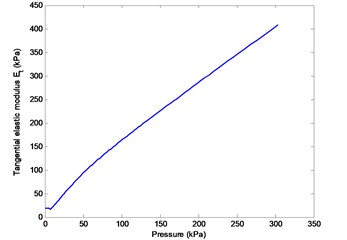 Firstly, geometric nonlinearity and contact nonlinearity were involved. Secondly, it is necessary to extract the principal stress of each element after each loadstep and recalculate and update the elastic modulus and Poisson's ratio according to the Duncan-Chang model. Thirdly, the garbage itself has a large deformation, and it may lead to element malformation and even negative volume, which results in the termination of the calculation. Generally, it is difficult to simulate the whole garbage compression process according to the Duncan-Chang model.