Copyright © 2018 Jingcheng Wang, et al. This is an open access article distributed under the Creative Commons Attribution License, which permits unrestricted use, distribution, and reproduction in any medium, provided the original work is properly cited.

Pyrotechnic devices are widely used in the aerospace and defense industry such as explosive bolts/nut, separation nut, pin pullers, cable cutters etc. [1]. Operation of these devices produces pyroshock which is generally characterized by its high-amplitude, high-frequency and short duration. This kind of high frequency shock is more concern to the function of equipment such as relays or glass oscillators rather than structural failure.

In recent years, non-pyrotechnic devices such as shape memory alloy (SMA) devices develop rapidly. However, they are only used to some specific functions, such as hold and release mechanism of solar arrays because of environmental capability, the high power required to operate, dependence on size and configuration and overall functioning time [2]. Therefore, in the future, pyrotechnic devices will still play an important role in the aerospace application due to their high reliability, simplicity and low cost.

At present, few studies have reported on the effects of the amount of explosive on pyroshock. Wang et al. [3]. performed a numerical study on a separation nut including separation mechanism and the effects of the amount of explosive on the pyroshock response. They found an approximately linear relation between the explosive amount and the SRS, but no relevant tests were performed. Dilhan et al. [4] measured the pyroshock of a wide range of pyrotechnic devices and compared pyroshock of three different pyrotechnic loads (80/120/150 mg) for same devices under same tension. Moreover, pyroshock test criteria and handbook such as MIL-STD-810G [5], NASA-STD-7003A [6], only give the empirical relationship between the SRS of complex spacecraft structures and the total energy released by pyrotechnics.

Pyroshock measurement techniques include accelerometers, strain gages, and standard laser Doppler vibrometers (LDVs) [7]. In this study, piezoelectric accelerometers were used to measure pyroshock because of their wide frequency range capabilities [8]. Output pressure of the igniter was measured by a pressure transducer mounted on the closed bomb.

A square aluminum alloy plate was suspended in the horizontal position using 4 elastic cords as shown in Fig. 1. The elastic cords simulate free boundary conditions. The plate made by aluminum alloy 2024 has a thickness of 10 mm and a surface of 600×600 mm. The closed bomb connected with an igniter and a pressure transducer was mounted onto the plate using a threaded hole. The volume of cavity inside closed bomb is 2.5 ml. 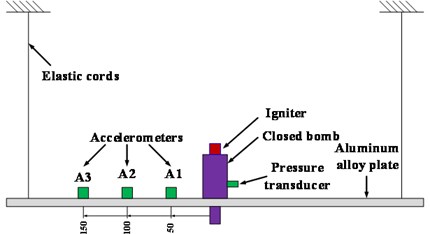 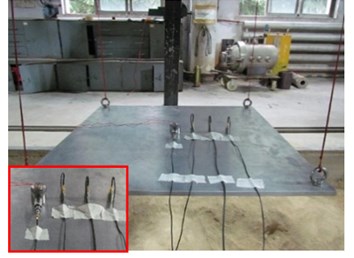 During the tests, the pyroshock signals were recorded by piezoelectric accelerometers of the range ±50,000 g, as shown in Fig. 1(a). Three measurement points were located on the upper surface of the plate, respectively 50 mm,100 mm and 150 mm away from the center. Piezoelectric accelerometers, the pressure transducer, and the sensor conditioner were used with a DAQ system. The sampling rate and the sampling time were set to 1 MHz and 20 ms respectively. The eight-pole Butterworth bandpass filter between 100 Hz to 30 kHz was applied for accelerometers results to resolve possible issues such as low frequency data drift and data aliasing during data processing [9].

Pyroshock measurement tests were performed 3 times under different amounts of explosive to improve the credibility of the test data. An abnormal data was obtained for 200 mg due to insufficient combustion of explosive and a test was performed again. The results of tests are discussed in next section.

3.1. Effect of amount of explosive on output pressure

After the detonation of the igniters, the pressure inside the closed bomb reaches peak value and then the pressure value gradually decreases. The peak pressure values under different amount of explosive are summarized in Table 1.

Fig. 5. Effect of amount of explosive on output pressure 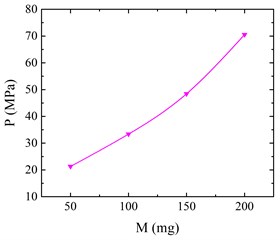 From the Fig. 5, it is clearly that the peak pressure values increase along with increased amount of explosive. Using the data, the Nobel-Abel equation of state [10] can be improved to estimate the explosive force of the main charge of the igniter:

where is the explosive force (J/g), is the peak pressure (MPa), is the volume of the closed bomb (2.5 ml); is the charge of the igniter (g); is the co-volume of explosive (cm-3/g). is the equivalent output pressure of the primers.

The relationship between the peak output pressure and the amount of explosive is in accordance with the Nobel-Abel equation of state. It is estimated that the explosive force and co-volume of main explosive are respectively 402.1 J/g and 5.58 cm-3/g. The equivalent output pressure of the primers is 12.37 MPa.

3.2. Effect of amount of explosive on pyroshock

The maximax shock response spectra (SRS) are calculated from 100 Hz to 10 kHz with a damping ratio 5 % (10). The typical measured acceleration data is showed in Fig. 6(a), while Fig. 6(b) presents the corresponding calculated SRS. 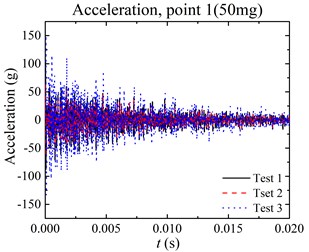 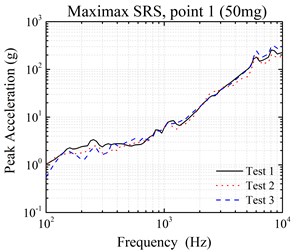 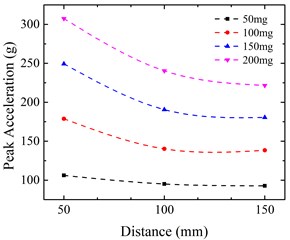 Fig. 8. Effect of amount of explosive on peak acceleration 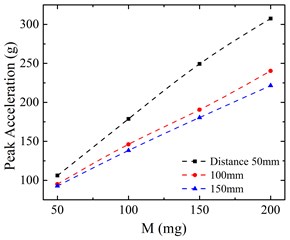 The SRS of different amounts of explosive are compared and analyzed for different locations as depicted in Fig. 9. Due to structural resonance response effects, the amount of explosive has smaller effects on SRS at low frequency (< 1000 Hz) compared with SRS at high frequency (> 1000 Hz), especially for point 2 and poin 3. To get a quantitative expression of the relation, dimensionless coefficients without regard to frequency are defined as: 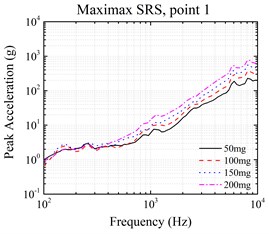 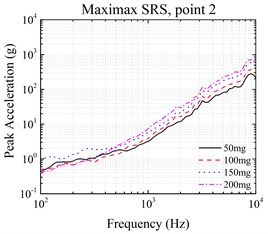 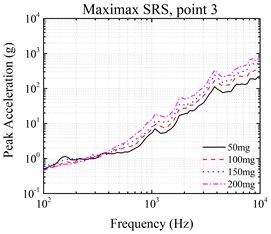 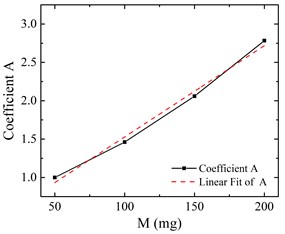 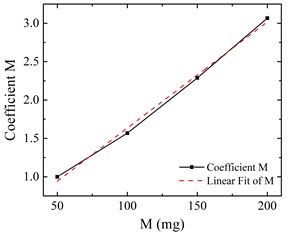