Copyright © 2018 Zhihong Du, et al. This is an open access article distributed under the Creative Commons Attribution License, which permits unrestricted use, distribution, and reproduction in any medium, provided the original work is properly cited.

The fiber-reinforced composite ceramics whose main structure is triangular symmetrical eutectic have good mechanical properties under high temperature and normal temperature conditions[1]. When the fibers in the eutectic cluster are distributed triangular symmetrically, the strong confinement property and the trigonal symmetry stable structure of the nanoscopic interface between fiber and matrix make composite ceramics have excellent anti-high-temperature creep. And the local slip feature of the micro-interface between eutectic groups makes it have high fracture toughness[2]. Many literatures have analyzed micromechanics about the strong constraining characteristics of the nano-interface, such as the microscopic stress field of unidirectional jagged inclusion eutectics[3], the damage strain field of unidirectional parallel eutectics[4], and damage intensity model of composite ceramics with damaged eutectics[5] etc. In order to reveal the relationship between the mechanical properties and the microstructure of the composite ceramic whose main structure is triangular symmetrical eutectic, the influence which the local slip property of the micro-interface between eutectic clusters brings to the composite ceramic mechanical behavior must be further analyzed.

2. Line strain of eutectic in fiber direction under external load

where is a eutectic outer micro stress field, :

where, axis 1 is along the eutectic crystal direction, and the mesoscopic axes 2 and 3 are perpendicular to the mesoscopic axis 1. is the angle between the axis 1 and the external load , the other components are all 0, so can be written as:

and are the elastic modulus and Poisson’s ratio of composite ceramics, which can be determined by the formula of [5].

Under the action of the external strain field , the stress field in the eutectic is:

where is the stiffness tensor component of a triangular symmetric eutectic group in a micro-coordinate system which is determined by the formula [6].

Fig. 1. The triangular symmetrical eutectic in the composite ceramic 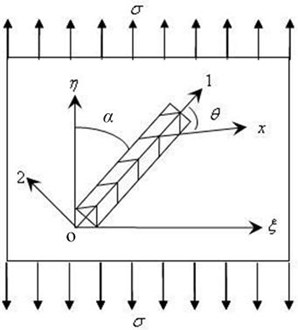 In summary, under the condition of elastic deformation, the stress strain is always linear:

The interface between the eutectic clusters is a weak interface. Under the shear stress, there is countless dislocation blocked and plugged up. The tip of the dislocation plug-in group is the micro-crack tip. The length of the slip surface at the critical point of the indentation cracking is [9]:

In the formula, and represent the hardness and fracture toughness of composite ceramics, which can be measured by indentation experiments. The critical shear stress on the slip surface during when crack nucleation is formed satisfies the following formula [9]:

In the formula, and are the surface free energy and shear modulus of composite ceramics. Substituting Eq. (15) into Eq. (16), the ultimate shear stress bear by the micro-interface in the composite ceramic can be determined:

In order to analyze the influence of the volume fraction and size of the fiber inclusions, the following quantitative studies are conducted on specific materials. For the double-scale interface composite ceramics mainly composed of Al2O3-ZrO2 triangular symmetry eutectic groups prepared by the high-gravity combustion synthesis method, the angles between the fiber inclusions and the crystal axis are known from the eutectic crystal plane characteristics is . The material constants of the matrix and fiber inclusions are 402 GPa, 0.233;  233 GPa, 0.31, 0.3, 10 μm, 300 nm. The macroscopic, mesoscopic and nanoscopic elastic constants of composite ceramics are determined by formulas of [7, 8]. Let 60°, fiber length 10 μm, fiber volume fraction 0.3, then the relationship between the slippage stress and the fiber diameter is shown in Fig. 2.

Fig. 2. The relationship between slipping stress and fiber diameter of triangular symmetrical eutectic 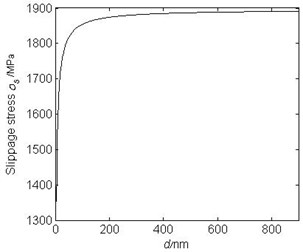 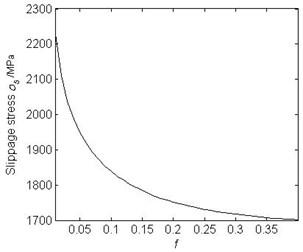 To test the micro failure mechanism proposed in this paper, some tested data is cited to check the theoretical results. The theoretical calculations and the experimental data of the strength of composite are shown in Table 1.

Table 1. Comparison between calculated strength and the test data

As shown in Table 1, the calculated strength of composite in this article is reasonable compared to the test data. All the calculated values are a little higher than the tested values. The anomalous cracks and pores in the crystal boundary may be the major reasons for this difference.

This work was supported by the National Natural Science Foundation of China (Grant No. 11272355).