Copyright © 2018 Hao Wen, et al. This is an open access article distributed under the Creative Commons Attribution License, which permits unrestricted use, distribution, and reproduction in any medium, provided the original work is properly cited.

An identification method based on functional data analysis (FDA) and extreme learning machine (ELM) is presented to identify the contact parameters of a cannon cradle and its bushing. A virtual prototype of the cannon is built in ADAMS. The response curves of muzzle vertical acceleration with different contact parameters of the cradle and its bushing are obtained by simulation experiments and used for FDA as sample data. Features of the sample data are extracted by FDA and functional principle component analysis (FPCA), and the features and contact parameters are used to train the ELM. Simulation data and test data are used to verify the proposed method. The presented method is also proved to be feasible and effective by comparing actual muzzle vertical acceleration curve and the muzzle vertical acceleration curve from the virtual prototype with respect to the test data identification results.

A cradle is the carrier of a cannon recoiling part, which rotates around the trunnion and transfers firing load to other carriages. Changes in contact parameters of the cradle and its bushing will affect mechanism kinematic accuracy during firing and firing accuracy of the cannon. To establish a virtual prototype of the cannon, it is significant to infer the contact parameters of the cradle and the front and back bushing. Due to a cannon is a complex and multi-parameter system, determination of key parameters is a core problem in the modeling process, but these parameters are difficult to measure and can only be obtained by identification.

Since it is difficult to find the analytic expressions of the measurable response to the parameters to be identified, optimization method based on analytic expression cannot be used to identify the contact parameters of the cradle and its bushing [1]. Machine learning (ML) can estimate the dependence of data based on the known sample, so ML can predict and judge the unknown data. Actual experiments can obtain high-quality samples, but for a cannon system, a large number of experiments require a lot of cost and resources and it is easier to obtain samples by virtual simulation.

2. Modeling and simulation of virtual prototype

The recoiling part of a cannon on zero firing angle is mainly affected by recoil brake force, recuperator force, sealing device friction and cradle rail friction. According to the topological structure of the cannon, the dynamics model is established in ADAMS as shown in Fig. 1.

Fig. 1. Virtual prototype of the cannon 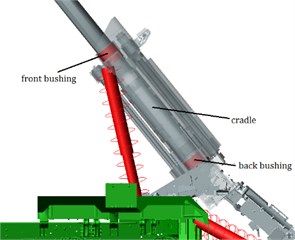 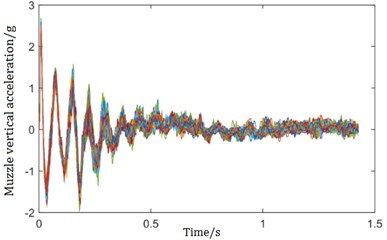 3. Features extraction based on FDA and FPCA

3.1. The FDA and FPCA algorithm

The basic idea of FDA is to treat the observed data as a whole, expressed as a smooth curve or a continuous function, and analyze it from a functional perspective. Assume that the th observation sample contains a series of observation values , , ..., , it can be transformed to be a function by FDA, where is the argument. Generally, the non-periodic data are expanded by the B-spline basis function system. Its functional form is represented by a linear combination of basis functions by letting indicate the vector of length and as the functional vector whose elements are the basis functions :

For making the estimated curves more stable, a roughness penalty is introduced:

where is the m-order derivative and .

Define as a weighted matrix and as a smoothing parameter, we obtain:

The expression for the estimated coefficient vector is:

FPCA is an expansion of Principle Component Analysis to Hilbert space. According to the derivation of Ramsay [4], the eigenfunction must satisfy the following equation:

where is the eigenvalue and is the covariance function.

Let indicate the eigenfunction and define an integral transform , , then Eq. (5) can be expressed as:

The principle component function also needs to be smoothed. Maximizing the variance of the samples with a roughness penalty:

For sample function, the form of basis function combination is . Let be the covariance matrix of vectors and define , then Eq. (7) can be written as:

The eigenequation corresponding to Eq. (8) is given by:

Now, preforming a Choleski factorization and defining , the Eq. (9) can be written as:

This is a eigenvalue problem, and , and the eigenfunction can be carried out in turns.

In this paper, a 4-order B-spline basis function and a 2-order roughness penalty function with smoothing coefficient 50000 are used. Fig. 3(a) shows the sample data for the muzzle vertical acceleration after this functional procedure. Fig. 3(b) shows the first ten principal component functions.

Fig. 3. The results of FDA and FPCA

When the number of hidden nodes is equal to training samples, ELM can approximate the training sample with zero error. There are , , and output layer matrix which make:

can be acquired by solving the least squares solution of Eq. (13):

where is the Moore-Penrose generalized inverse of the output matrix.

The identification accuracy and generalization performance of ELM are evaluated by average relative error and determination coefficient , respectively: 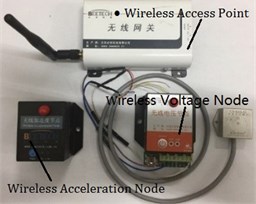 Fig. 5. The installation diagram of the sensors 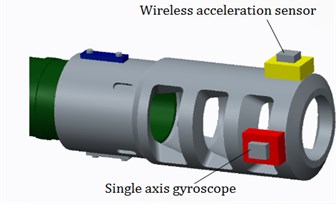 The parameters identified by the test data are substituted into the virtual prototype model for simulation, and the test curve is compared with the simulated curve. As shown in Fig. 7, the two curves are more consistent, which proves the reliability of the identification results.