Copyright © 2020 Jinfeng Yu, et al. This is an open access article distributed under the Creative Commons Attribution License, which permits unrestricted use, distribution, and reproduction in any medium, provided the original work is properly cited.

It is of great significance to study the damage and fracture mechanism of trigonometrically symmetric eutectic multiphase ceramics with excellent mechanical properties at room temperature and high temperature. According to the microstructure characteristics of inner triangular symmetric eutectic in multiphase ceramics, a two-scale cell model containing triangular symmetric eutectic was established. The fracture stress of cohesive bond in eutectic was calculated by considering the conditions of cohesive bond fracture at interface phase and fiber junction. The damage variable was introduced and combined with cohesive bond fracture stress to establish the microcosmic damage fracture stress model of eutectic Based on the Dugdale Barenblatt model, the damage localization band model is established by introducing the micro damage fracture stress as the residual strength. It is found that with the increase of fiber volume fraction, the strong confinement of interface phase is destroyed, the residual strength decreases and the length of damage localization band increases with the increase of fiber volume fraction. Reducing the damage degree and selecting the appropriate fiber volume content can increase the fracture stress of eutectic, and then reduce the length of damage localization band, increase the threshold value of crack instability propagation, and enhance the material strength.

In recent years, for the study of mechanical properties of composite ceramics, the relationship between the microstructure of different materials and the macro mechanical properties of materials has been established [1-3]. For example, based on shear lag theory, mesostructure and interface properties, the initial tensile modulus of the material is predicted, and the strength model and damage constitutive relationship of 2D-C/SiC composites are established [4-6]. Based on the meso structure of fiber reinforced ceramic matrix composites, a micromechanical model of bridged fiber was established. Considering the influence of interface, the tensile modulus of the material was predicted, and the influence of interfacial bonding strength on the fracture strength of the material was analyzed [7]. According to the microstructure of the rod eutectic containing parallel reinforcing fibers, the damage fracture stress of the rod eutectic containing parallel fibers is determined based on the microscopic damage in the eutectic [8]. The cohesive bond fracture condition between two phases of eutectic is not considered in the above model. Based on the triangular symmetry structure of eutectic clusters, the limit stress of the composite ceramics was predicted [9]. Based on the microstructure characteristics of eutectic ceramics containing parallel fibers, a damage fracture model of parallel fiber eutectic composite ceramics was established [10]. These studies lay a foundation for the analysis of the damage and fracture of trigonometrically symmetric eutectic multiphase ceramics.

According to the damage degree, the macro crack tip field can be divided into non-destructive zone, continuous damage zone and damage localization zone, and the most serious damage area is damage localization zone. It is the basis of analyzing the crack tip field of multiphase ceramics, and is also the prerequisite to determine whether the macro crack propagation of multiphase ceramics can be unstable. According to the meso damage theory of crack tip, microcracks grow steadily in the continuous damage zone at the crack tip, and then the microcracks will enter the damage localization zone where stress drop occurs and continue to expand. The nonlinear damage section is introduced into the shielding effect analysis of crack tip in reference [16]. It is proved that the stress distribution in the damage saturation region is still K field, and the stress drop and strain softening play a major role in the smaller range of crack tip.

According to the microstructure of the composite ceramics, considering the effect of micro damage on the effective properties of the composite ceramics, a two-scale cellular model is established to analyze the cohesive bond fracture conditions, and the micro damage fracture stress model is established the length of localized band of end damage was predicted.

The composite ceramics are mainly composed of triangular symmetric eutectic. The eutectic body contains nanofibers. According to the microstructure characteristics of eutectic based multiphase ceramics, a two scale cellular model is established, as shown in Fig. 1.

One is that the rod-shaped eutectic with triangular symmetric eutectic is arranged in the same direction, forming an ellipsoid like structure in the local area. This ellipsoid is placed in the matrix of particle structure and randomly distributed in space to form eutectic multiphase ceramics, forming a two-scale cellular model of the material. The other is that the ZrO2 reinforced phase is uniformly distributed in the Al2O3 matrix in a single eutectic, forming rod-shaped eutectic. The eutectic consists of micro cell and effective medium, as shown in Fig. 2.

It is assumed that cohesive bond fracture occurs in eutectic. At the phase boundary of eutectic, the fracture stress of two-phase cohesive bond is the same, and the functional relationship between bond bonding stress and separation displacement can be expressed by half sine function:

where, is the cohesive bond fracture stress of eutectic, is the bond range parameter, 0 represents the matrix phase, represents the reinforced phase. Because the matrix and reinforcement share the same bond, the slope of bond stress curve at the equilibrium point should be equal to its elastic modulus:

where is the equilibrium atomic spacing. If the stress is interrupted at , and the integral of the bond bond stress function to the displacement is equal to the surface energy , then: 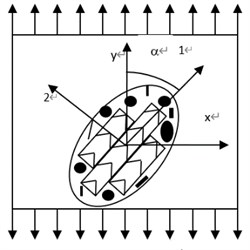 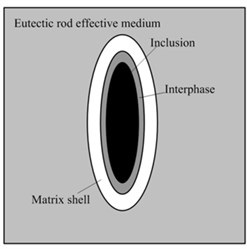 According to Eqs. (2) and (3), the cohesive bond fracture stress of eutectic is obtained as follows:

It can be seen from the above formula that the cohesive bond fracture stress of triangular symmetric eutectic is related to the elastic modulus, surface energy of fiber reinforced phase and matrix in the eutectic body, and the bonding bond arrangement mode shared by the eutectic two phases.

Because in the eutectic body, the fibers in the same triangle area are arranged in the same direction and parallel, as follows:

where and are the length and diameter of the fiber respectively, is the dimensionless quantities.

At the junction of eutectic two phases, there is a large stress concentration due to dislocation accumulation, and a stress field will be generated around it. The maximum tensile stress produced by this stress field:

From Eqs. (4), (5) and (6), it can be concluded that the damage fracture stress of reinforced fiber eutectic with triangular symmetry distribution is:

Taking Al2O3-ZrO2 triangle symmetric eutectic group based composite ceramics prepared by high gravity method as an example. The material constants of matrix and fiber inclusion are as follows: 402 GPa, 0.233, 1.06 J.m-2, 233 GPa, 0.31, 1.829 J.m-2,respectively. The length of reinforcing fiber is 2 µm, fiber diameter 200 nm and damage variable (1, 2, 3). According to the Eq. (7), the curve of the microcosmic damage fracture stress with the diameter of the reinforced fiber is obtained, as shown in Fig. 3. 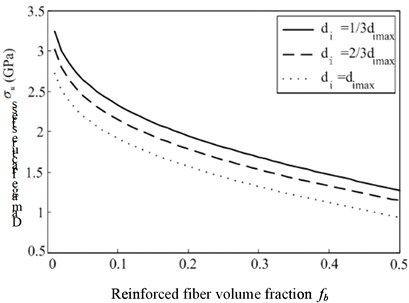 Under the tensile stress , the stress intensity factor is obtained as follows:

where . The distribution of the normal stress in the extension line along the direction is given by the following:

where is the distance between the crack tip and the end of the damage localization band, .

Assume that the stress distribution lies in is:

These conditions are reasonable because the size of the damage localization band was very small compared with the crack size, namely, . Furthermore, only the stress of the points close to the band was of concern. Thus, . When one pair of concentrated forces focus on the point of (), the normal stress along the axis around the damage localization band is expressed as follows:

The corresponding stress intensity factor is:

For a microcell with reinforced lamella eutectic, when the stress is linearly distributed in the damage localization band, the stress is given by:

Assuming that the residual strength is the damage fracture stress of lossy eutectic with linear distribution, Eq. (7) is substituted into Eq. (13) to obtain:

The length of the damage localization zone is obtained:

Take the diameter of reinforcing fiber as 200 nm. Assuming the far-field stress intensity factor of triangular symmetric eutectic matrix composite ceramics 5 MPa⋅m1/2, the change curve between the length of damage localization band and the volume fraction of reinforcement phase can be obtained from Eq. (15), as shown in Fig. 5. 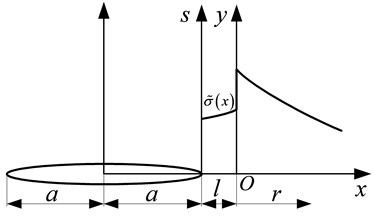 We acknowledge the support from the National Natural Science Foundation of China (Grant No. 11272355).