Copyright © 2020 Hongtao Wang. This is an open access article distributed under the Creative Commons Attribution License, which permits unrestricted use, distribution, and reproduction in any medium, provided the original work is properly cited. 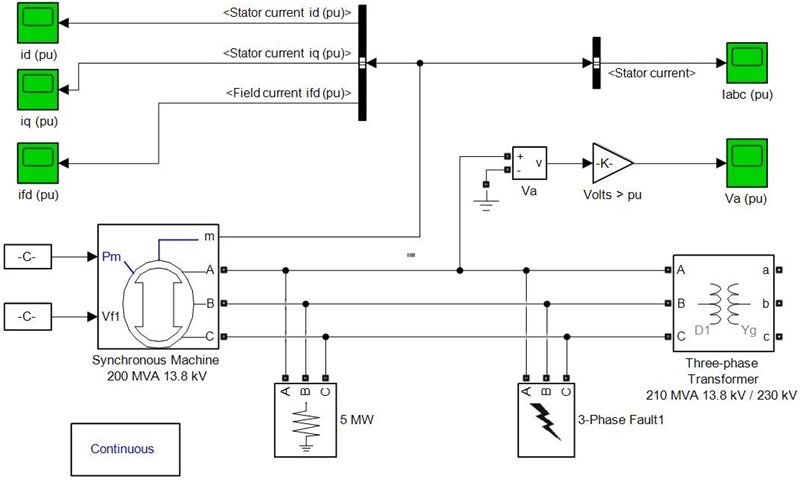 When discussing the three-phase short circuit of synchronous generator, the normal operation and fault operation state of synchronous generator can be superimposed and solved [3, 4]. This is equivalent to adding a three-phase voltage equal to and reverse to the generator terminal voltage in normal operation of the generator at the generator port. After adding three-phase voltage at both ends of the stator winding, in order to keep the flux chain of the winding unchanged, an instantaneous current is produced in the stator winding. The decay of these currents is as follows, the DC and frequency doubling components of the stator attenuate to zero at the moment of short circuit, and the AC component of the stator gradually attenuates from the initial value and finally attenuates to the steady value. In addition, most of the rotor current will decay to zero, leaving only the rotor DC.

As time goes by, the free current that appears in the short-circuit state will decay to zero due to the resistance of the stator and rotor. The time constant will determine the attenuation of the current components of each winding. The larger the time constant, the slower the attenuation, and the smaller the time constant, the faster the attenuation. in synchronous generator, there are windings on stator and rotor, and the time constant of winding is related to inductance, then the time constant is expressed as the ratio of winding inductance value to winding resistance. The transient differential equation of winding is explained by the negative number of the ratio of winding resistance to winding inductance, that is, the characteristic root of differential equation [5]. When magnetic coupling exists in adjacent windings, mutual inductance should be considered to calculate the time constant, otherwise it will affect the accuracy of the final result. Under the circumstance of ensuring the constant flux linkage, studying the free current generated during short circuit, it can be concluded that according to the rotor excitation time constant Td’, it can be concluded that it attenuates according to the time constant of excitation winding which the DC and frequency doubling components of stator windings correspond to the fundamental frequency components of rotor current [6]. The time constant 9 is determined by the ratio of inductance of stator winding to resistance considering the mutual inductance of excitation winding [7, 8]. When this magnetic flux passes through the longitudinal axis of the rotor, the equivalent reactance of the stator winding is ; when it passes through the horizontal axis, it is . The calculation process of the stator and rotor current is as follows, the , axis component of stator current is calculated first, and then the rotor current is calculated by the integration of formula.

The -axis component of the stator current is:

The -axis component of the stator current is:

Through the finishing transformation of the above formula, the current in the rotor winding can be obtained as show in Eq. (3):

a phase current of stator is:

A three-phase short-circuit simulation model of synchronous generator is established in Matlab/Simulink simulation environment. The model is shown in Fig. 1.

Fig. 1. the Simulation model of three-phase short-circuit of synchronous generator 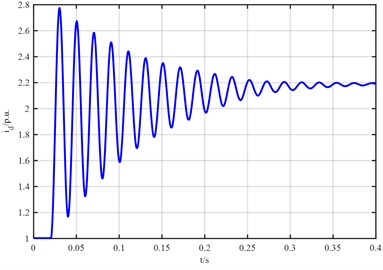 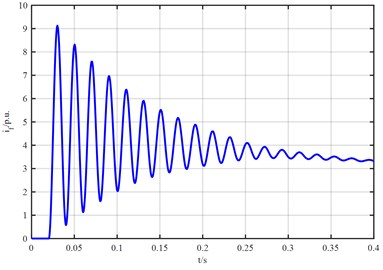 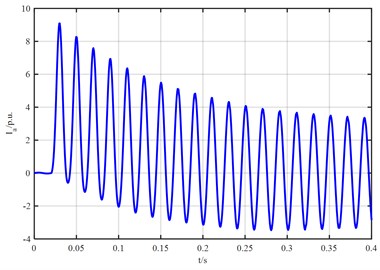 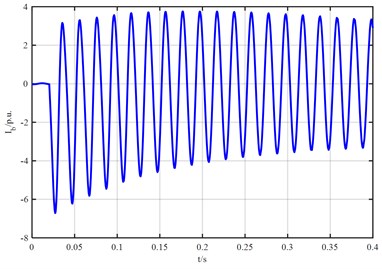 It can be seen from the above analysis that when the synchronous generator is operating normally, there is no direct-axis and quadrature-axis currents. At the moment of short circuit, the vertical axis and horizontal axis currents gradually increase, and decay after a period of time after short circuit. The direct axis current increases faster than the quadrature axis current, and the attenuation is also slower than the quadrature axis. At the same time, the excitation current not only does not attenuate but increases sharply after short circuit. The main result is that the DC current attenuates quickly. The excitation winding attenuates the DC current and increases the excitation current to offset the attenuation of the DC current, thus maintaining the flux conservation. At the moment of short circuit of synchronous generator, stator current contains three components: fundamental frequency, DC frequency and frequency doubling component. When a three-phase short-circuit fault occurs, the A phase current increases the waveform first and then gradually moves down because of attenuation, while the B, C phase current waveform is opposite to the A phase current. The amplitude of the three-phase current is equal, the phase difference is invariant, The stator three-phase voltage decays directly to zero from the value before the short-circuit moment. In general, the three-phase short circuit of synchronous generator has an effect on the voltage and current, which makes the voltage drop to zero directly. For the current, the process is more complicated, but the total current is increased.

This paper was supported by the following research projects: by the Natural Science Fund of Fujian Province (2019 J01845).