Copyright © 2022 Hui Song, et al. This is an open access article distributed under the Creative Commons Attribution License, which permits unrestricted use, distribution, and reproduction in any medium, provided the original work is properly cited. 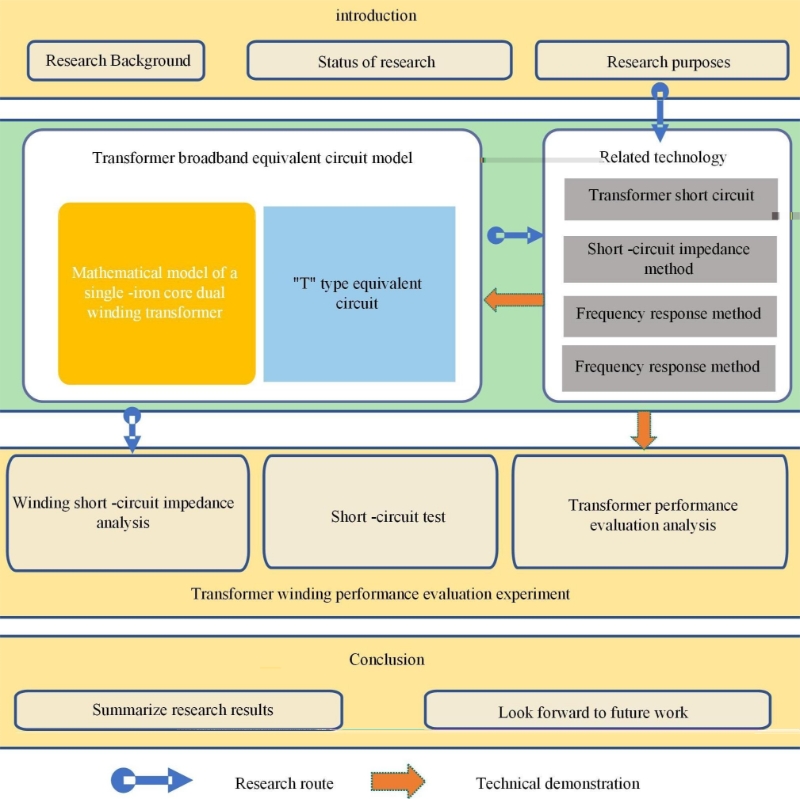 With the development of the energy Internet, the number of large power transformers in operation will also increase. When the power transformer has a short circuit, the huge impact current will make the winding in the instantaneous increase of the leakage magnetic field. Under the action of these two instantaneous impact variables, the insulation characteristics of the transformer winding will be destroyed and subjected to hundreds of times the short-circuit impact force, and more seriously, the winding will be broken, and the winding structure will be deformed or collapsed. This kind of serious accident will directly lead to large-scale power outages in the power system, causing huge losses to the national economy. It is inevitable that the transformer winding fault occurs due to the short-circuit current, so it is of great significance for the stability of the power grid to detect the occurrence of the fault and improve the anti-short-circuit ability of the power transformer [2].

The main innovations of this paper are:

2) Adopt an analytic hierarchy process to obtain a weight matrix of each index adopted for evaluating the quality of the transformer, and calculate a synthetic weight.

3) By calculating the comprehensive index of fuzzy evaluation, the evaluation conclusion is given according to the score set corresponding to the obtained score.

(1) For the detection of the hanging cover, although some problems on the surface of the winding can be observed with the naked eye, it is difficult to observe the internal situation of the transformer winding through vision, and it is subjective to observe with the naked eye. Because the detection of the hanging cover will also be affected by some uncontrollable factors due to the contact of the transformer winding with the external environment [12].

(3) What kind of indicators are needed for field operators to judge the performance of transformer windings [14].

Short-circuit impedance method is the earliest method to judge whether there is deformation in the winding without hanging the cover. Compared with previous methods, this method has high repeatability and simple operation. Thus, that method is widely used, and there are many standards for this method at present [15]. The operation of this method is shown in Fig. 1.

The wiring mode of short-circuit impedance method is shown in Fig. 2.

In Fig. 2, the parameters are shown in Table 2.

The calculation formula of this method is shown in Eq. (1):

The output of FRA needs to be measured. After Laplace transform of the two functions, they can be compared with each other to obtain the function of frequency response. Through the method of horizontal comparison or vertical comparison, the performance of the winding can be evaluated. Fig. 3 shows the frequency response method detection circuit and the distributed parameter model of the transformer winding.

In this paper, the short-circuit impedance method is mainly used, and the oscillatory wave method is supplemented. The mechanism of this method is deeply studied and the appropriate indicators are found. These methods are used to evaluate the performance of distribution transformer windings after short-circuit test.

To evaluate the performance of transformer windings, such as the sweep frequency method and oscillatory wave method, the transient state of transformer windings should be considered. For transient analysis, it is a simple and effective method to obtain a black-box model based on terminal measurements. In this method, the equivalent RLC circuit network is measured by terminal measurement in the factory or field, and the measured characteristics, such as impedance or admittance curve in the frequency domain, can be clearly expressed by a model accurately established by vector fitting technology [19].

At low frequencies (typically 2000 Hz and below), the transformer winding must be modeled to account for the core. The behavior of the core (magnetizing inductance, core power losses, and parasitic capacitances coupled to the magnetizing inductance) is significant at very low frequencies, while the effects of the windings (copper losses, leakage inductance, and other stray capacitances) are negligible [20]. In the case of low frequency, it is necessary to consider the role of the iron core. The mathematical model of the transformer is analyzed and calculated through the transformer with a single iron core and double windings, as shown in Fig. 4.

is the self-inductance of 12 windings:

is mutual inductance between windings 12 and 34:

Substitute , , and in terms of permeance and coil turns into the flux linkage equation:

3) According to Faraday’s law of electromagnetic induction, the voltage and flux linkage equations are established simultaneously:

The system of simultaneous equations is then transformed into:

Fig. 5 shows the "T" equivalent circuit of the transformer, which is the most basic and simplest circuit model for the analysis of single-phase transformers [22].

For transformers with tap switches, if not specified, it generally refers to the main tap. The fractional value for the short circuit impedance is expressed as:

where, is the voltage of and winding (kV); is the reference value of rated capacity (kVA).

Table 6. Comparison of short circuit impedance and analysis of deformation of distribution transformer before and after short circuit test

4.4. Analysis of transformer performance evaluation based on short-circuit impedance method

For the above deformation conditions, the law of the change rate of the short-circuit reactance of the transformer and the degree of deformation is obtained, as shown in Fig. 6.

Fig. 6. The relationship between the change rate of short-circuit impedance of transformer winding and the degree of deformation 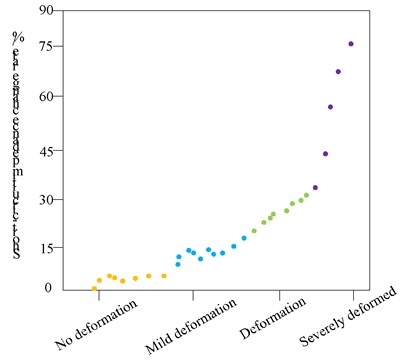