Research on IGOA-LSSVM based fault diagnosis of power transformers

Copyright © 2022 Yunsheng Chen. This is an open access article distributed under the Creative Commons Attribution License, which permits unrestricted use, distribution, and reproduction in any medium, provided the original work is properly cited.

Power transformer is an important part of power equipment, and its functionality affects the proper operation of the whole power network. In order to diagnose power transformer faults effectively, the authors propose a fault diagnosis strategy based on an improved locust optimization algorithm for least squares vector machines (IGOA-LSSVM). Firstly, it was required to address the problem that the diagnostic prediction accuracy of the least squares vector machine is reduced due to its parameters. So this paper introduces the locust optimization algorithm with simple algorithm structure and good performance for optimizing the parameters. And at the same time, the authors generate an improved locust optimization algorithm with self-learning factors, proportional weight coefficients and Levy flight strategy. Secondly, the improved locust optimization algorithm is used for optimizing the least squares vector machine parameters. Finally, in the simulation experiments, the results of the benchmark test function illustrate that the IGOA algorithm has better performance, and the test results of a fault samples diagnosis of the power transformer equipment illustrate that the IGOA-LSSVM has good prediction effect and improves the fault identification accuracy compared with ACO-LSSVM and PSO-LSSVM in five types of fault diagnosis. 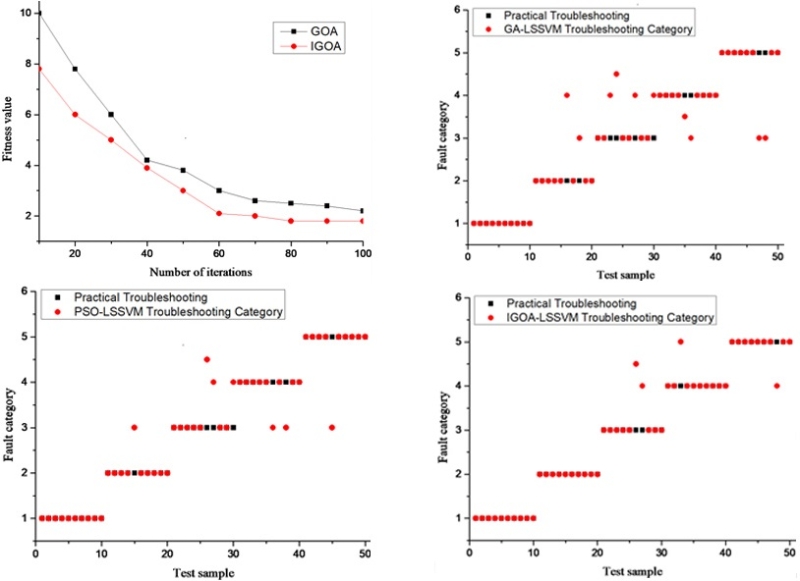 Having summarized the above literature research with different solutions to identify power transformer equipment faults, using neural networks to assist in equipment fault resolution, the authors of this paper determined the main direction that most scholars were still researching. But while the neural network parameter settings are the key factor for equipment diagnosis for this goal, combined with the basis of some scholars’ research, this paper proposes a locust optimization-based algorithm with a least squares vector machine optimization model, uses a locust algorithm to select the optimal parameter model, and finally applies the ready solution for the equipment fault diagnosis of power transformers. Simulation experiments illustrate that the diagnosis model has a good prediction effect.

Although Eq. (6) is used to simulate the Grasshopper population, from the aspect of practical application, the gravitational factor is usually not considered, and the wind direction is determined to point at the target location, so the best individual Grasshopper location is solved as the optimization problem. The formula is shown below:

where, and correspond to the upper and lower bounds of the th Grasshopper in the th dimension respectively, is the target position of the Grasshopper swarm, in Eq. (8) is the decreasing coefficient, which is used to balance the global search and local exploitation ability on the one hand, and the exclusion and attraction domains on the other hand, is the number of current iterations, and are the maximum and minimum values respectively. is the maximum number of iterations

Let the training sample set for the binary classification problem be:

where, is the weight vector, is the mapping function, and is a constant, so the optimization function of the least squares vector machine is:

where, is the relaxation variable, and is the regularization parameter.

The current LSSVM has many kernel functions, and its radial basis function has the advantages of parameters, generality, etc. In this paper, the authors choose it as the kernel function of LSSVM, which is determined as follows:

By introducing the Lagrange operators and , Eq. (11) is transformed into a pairwise problem, i.e.:

From , and can be derived. The decision function of LSSVM can be obtained as:

Like most meta-heuristic algorithms, the Grasshopper algorithm will also have some shortcomings such as falling into local optimality, slow algorithm convergence, and low solution accuracy. In order to improve the performance of the GOA algorithm and better optimize the LSSVM parameters, this paper proposes a self-learning factor, proportional weight coefficient and improved Grasshopper optimization algorithm for Levy flight.

where, and denote the maximum and minimum values of the adaptive learning factor, and are the number of current iterations and the maximum number of iterations, respectively. It is found from the formula that with the gradual increase in the number of iterations, it is effective in the early stage of the algorithm to avoid other Grasshopper individuals congregating at once, thus avoiding individuals falling into the local optimum, avoiding missing some extreme values of individuals, as well as avoiding the appearance of regions that may not be searched.

In order to further improve the local search and global optimum capability of the traditional Grasshopper algorithm, this paper combines Eq. (1) and Eq. (7), and optimizes the weight coefficients and respectively in the actual situation, with the following optimization expression:

A. M. Edwards [16] in the study of bionic animals found that bionic animals were those that advanced randomly in an arbitrary dimensional space in any direction for any length of moment departure, and this behavioral feature was called Levy flight feature. This flight characteristic can perform local search in a small range on one hand and global search in a large range on the other hand, and such an operation can effectively balance the relationship between the global and local ones. The distribution density function of Levy flight step variation can be approximated as follows:

where, is the random motion step of Levy’s flight behavior, expressed as follows:

From the behavior of Levy flight features, Grasshoppers also have such behavior during foraging, especially when other Grasshopper individuals approaches the current individual, which can very easily lead the algorithm to a local optimum situation. So to avoid this situation, the Levy aircraft mechanism is introduced in the foraging behavior of the algorithm with the following equation:

where, is the current number of iterations, and is the initial scale factor. It is found from Eq. that the use of the Levy flight feature enables the GOA to perform a small range search at the beginning of the algorithm and then a large range random search, ensuring that the GOA searches in different ranges, which can approximate the global optimal solution. Therefore, the use of the Levy flight feature can prevent the algorithm from oscillating around the optimal value and obtain the optimal solution as soon as possible.

The IGOA algorithm flow is shown in Fig. 1.

The improved GOA and LSSVM for state prediction of power mechanical equipment is to build a nonlinear model between the input and output quantities, which core is to determine two important parameters and in the LSSVM, which have a very significant impact on the predictive capability of the model.

The specific steps are as follows:

Step 2: Optimize each of the three improved strategies in GOA according to the improved three-ratio method.

Fig. 1. Flow chart of the algorithm in this paper 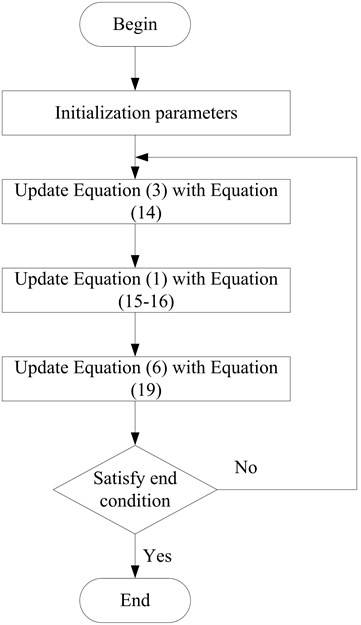 In this paper, the IGOA algorithm and the GOA algorithm are compared under six benchmark test functions (Table 1) in different dimensions (2-dimensional, 5-dimensional and 30-dimensional). Moreover, respective parameters and set for 100 iterations are selected for these algorithms, and the simulation results are obtained with the help of Matlab2012 simulation platform as shown in Table 2. 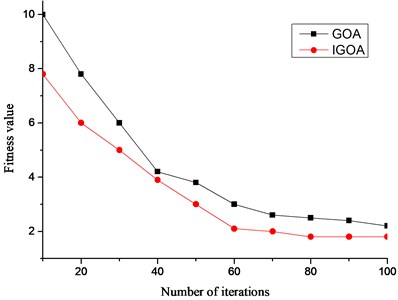 The internal faults of transformers can be mainly classified into electrical and thermal faults according to their fault phenomena. Therefore, the fault causes are generally divided into high temperature overheating, medium and low temperature overheating, high-energy discharge, low-energy discharge and partial discharge. When a fault occurs in a transformer, hydrogen, methane, ethylene, acetylene and other gases dissolve in the insulating oil of the transformer, and the specific type of fault in the transformer is determined based on the content of these gases in the oil. Therefore, data collection and sample classification are carried out in this paper.

Since the operating condition of a transformer is directly related to the content of dissolved gases in the oil, representative data samples are selected here for model creation. Due to the great variability and dispersion between the volumes of various gas components, the input data for training are first pre-processed here in order to reduce the impact caused by the order-of-magnitude differences between them and to speed up the training. In this paper, the training and test sets are processed by normalization, and the specific formulas are shown below:

According to the improved three-ratio method of gas characteristics, this paper divides the transformer operating status into 6 categories, namely, high-energy discharge, low-energy discharge, high temperature overheating, medium and low temperature overheating, partial discharge, and normal state. In addition, it introduces the corresponding coding system, which is shown in Table 3. Through the model in this paper, the optimized penalty factor and the kernel height basis function parameter group are used to train the model using the training samples in the original DGA [17] data, and the test samples are used to test and evaluate the model.

In order to verify finally that the transformer’s mechanical fault diagnosis model based on the improved algorithm optimized support vector machine proposed in this paper is equally effective when more data are available. Here in this paper, 260 sets of DGA data collected are classified according to the procedure from Table 4. Among the 260 sets of sample data collected, they are divided into six categories, of which 170 sets of sample data are available in the training set, and the remaining 90 sets are used as the test set sample data. Among them, 1-45 belong to the first category (high-energy discharge), 46-90 belong to the second category (low-energy discharge), 91-135 belong to the third category (high-temperature overheating), 136-180 belong to the fourth category (medium-low temperature overheating), 181-225 belong to the fifth category (partial discharge), and 226-260 belong to the sixth category (normal state). And in the first five operating states of the original DGA data grouped into 30 groups as the training set, the other 1-55 groups as the test set; from the sixth operating state of the data grouped into 20 groups as the training set, and the remaining 1-5 groups were put into the test set. The specific training set and test set sample labels are shown in Table 4.

The test failure results are shown in Table 5. The table demonstrates that the algorithm in this paper has good results in six fault cases, with the average detection rate above 93 %. Thus, the IGOA-LSSVM proposed in this paper has good results in the detection process, although the recognition accuracy in high temperature overheating is lower than 90 %, i.e. the gas characteristics of this fault are not obvious enough and are easily influenced by the rest of the fault characteristics. 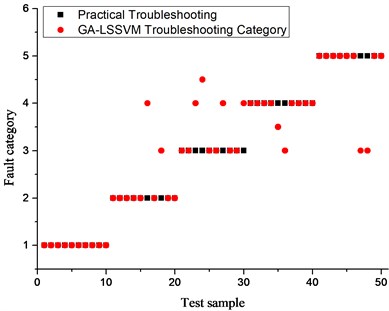 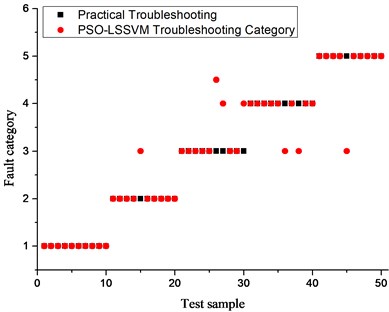 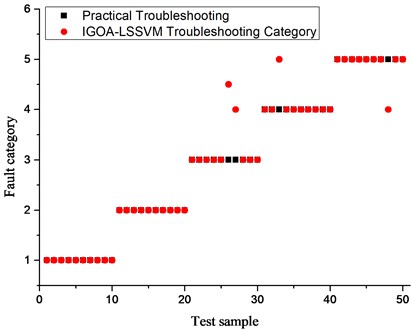 To improve the ability to identify mechanical faults in power transformers, the authors propose an IGOA-LSSVM fault diagnosis model based on the IGOA. To improve the prediction of LSSVM, they created an IGOA model based on GOA algorithm using three strategies: self-learning factor, proportional weight coefficient and Levy flight, and used it to optimize the LSSVM parameters. In the simulation experiments, the IGOA-LSSVM has better recognition effect compared with ACO-LSSM and PSO-LSSVM models for the identification of five power transformer faults. In the next step, the authors are going to improve further the fault diagnosis method.