Copyright © 2019 Jin Mao, et al. This is an open access article distributed under the Creative Commons Attribution License, which permits unrestricted use, distribution, and reproduction in any medium, provided the original work is properly cited.

All the current sound field separation methods based on particle velocity are apply measurement surfaces or a single measurement surface with pressure-velocity. In order to acquire less measurement data and efficient calculation, a sound field separation method with single holographic surface based on particle velocity is proposed. According to the principle of equivalent sources near-field acoustical holography technique, this method can separate directly the sound filed information radiated by target source from coherent sound fields. Numerical simulation analyzed the results with different frequencies and signal-to-noise ratio (SNR). The results show that this method can separate the coherent sources accurately and efficiently. 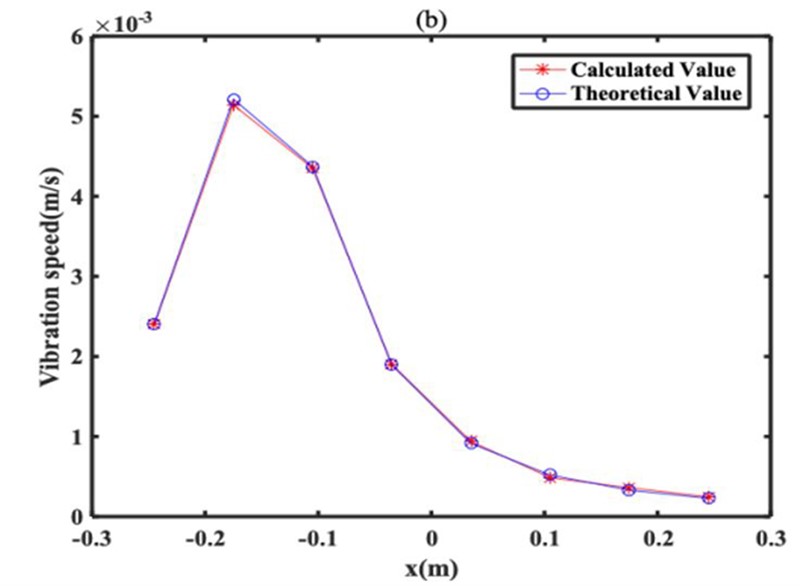 Near-field acoustical holography (NAH) is a technique for reproducing sound field information [1, 2], because this algorithm has a great advantage in noise source identification and positioning, which gets a fast application in engineering. Sound field separation technology based on NAH requires that the traditional NAH measurement surface must be located on the same side of the sound sources. 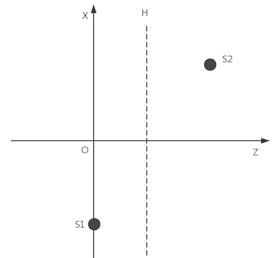 Reconstruction of the vibration speed can be expressed by:

Because the errors and are smaller relative to the signal, the regularization method is used to reduce the influence of the error when the theoretical vibration velocity is calculated. We can obtain the approximate representation as follows:

By Eq. (1) we can obtain the following equation:

Combining Eqs. (5) and (6), we can obtain the following equation:

By Eq. (1) we can obtain the following equation:

Combining Eqs. (7) and (8), we can obtain the following equation:

where make the simplification Eq. (10), we can obtain the vibration velocity approximate equation:

where is the identity matrix.

It is obvious that, with the above-mentioned method, the particle velocity radiated by the can be separated from the coherent sound field.

Fig. 1 shows the locations of the sound field. Two pulsating sources are placed on either side of the holographic surface. Target source and interference source coordinates are located at (-0.15, 0, 0) m and (0.15, 0, 0.2) m, respectively. All the sound sources all have the same radius of 0.01m, the vibration speed of sound sources is 0.25 m/s. putting the virtual ball inside the sound source, and the virtual sphere radius is 0.008 m. the virtual sphere is divided into equal grids, and the equivalent sound source is placed at the grid node, there are ninety-two equivalent sources in both pulsating sources. The holographic plane is located at 0.08 m along the horizontal () directions. The hologram size is direction 0.49 meters, 0.49 meters in the direction, using 8 sensors arrays per row and per column, the grid space was 0.07m along the horizontal () and vertical () directions. During numerical simulation, white Gaussian noise with 30 dB SNR is added to the theoretical value. The mixed sound pressure measured by this holographic plane includes the sound pressure produced by the target sound source and the interference sound source and their respective errors. We use the algorithm introduced in this paper to separate the sound field information of the target sound source from the interference sound source and the measurement error.

The separated error level can be expressed by:

where is the theoretical value of particle velocity radiated by the target sound source on the measuring surface, and is the calculated value.

Fig. 2(a) shows a three-dimensional graph of the vibration velocity of target source, which was obtained by the calculated using this algorithm; Fig. 2(b) shows a two-dimensional diagram of the theoretical and the separated velocity, from where it can be seen that the errors between these two values are very small. Here, the separation error is Leer = –33.35 dB, which is calculated by Eq. (12). It is obvious that, such field separation method is effective and accurate.

Fig. 2. Vibration velocity measured on the holographic plane at 1000 Hz: a) calculated value, b) comparison chart 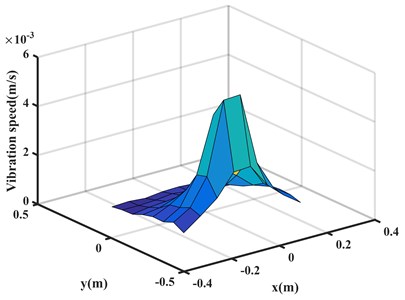 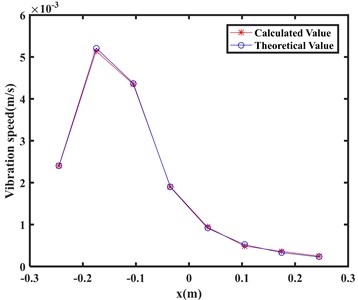 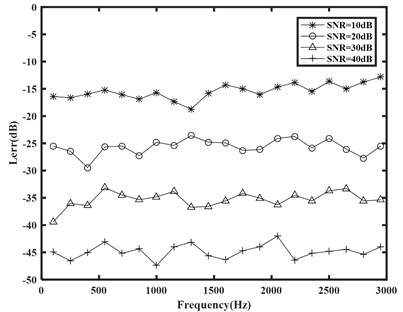