Copyright © 2018 Chen Hantao, et al. This is an open access article distributed under the Creative Commons Attribution License, which permits unrestricted use, distribution, and reproduction in any medium, provided the original work is properly cited.

When multiple coherent sound sources are distributed on the same side of the holographic surface, the conventional method must use known information such as sound source distribution and geometry. In view of this situation, a method of coherent sound field separation combined with compressive sensing is proposed. The method is based on the plane equivalent source near-field acoustic holography method and the orthogonal matching pursuit algorithm of compressive sensing technology. Get the distribution of the virtual sound source on the plane, and then the virtual sound sources are grouped and selected. Finally, the distribution of sound pressure in the near-field plane after separation of the sound field is calculated using the conduction matrix. The method does not require other prior knowledge. The simulation results show that this method can be used as an effective complementary method for coherent sound field separation based on single-sided measurement.

The existing acoustic imaging technology is mainly implemented by near-field acoustical holography (NAH) [1, 2]. When there are multiple coherent sources in the sound field and they are on the same side of the holographic surface, the holographic surface measurement results in a composite sound field produced by each coherent source. At this time, the sound pressure distribution of a single sound source and its contribution in the sound field cannot be obtained by the conventional near-field acoustic holography methods.

Many scholars have also conducted extensive research on sound field separation technology based on single-sided measurement. Part of the field decomposition techniques proposed by Hallman et al. [4] could be used to analyze the multi-source sound field on the same side of the holographic surface as the coherent sound source. However, the position of the sound source needed to be known in advance and the reference microphone was arranged to obtain the signal related to the sound source. Wu et al. [5] proposed a hybrid near-field acoustic holography technique. However, there was still needing to add an auxiliary surface in the selection of the optimal cut-off order of spherical wave. Two measurements were needed in the actual measurement. Zhang Yongbin et al. [6] proposed a hybrid source-based coherent sound source separation method, but it was necessary to place an orthogonal spherical wave source at each sound source. 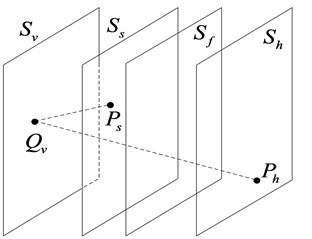 The sound pressure distribution on the holographic surface can be represented by the following integral equation:

where is the free space Green’s function from the virtual point source to the point which is on the holographic surface, is the virtual point sound source intensity, is the medium density, is the sound speed, and is the wave number. The sound pressure on the actual sound source surface can be expressed in the following form after being discretized:

After the sound pressure on the holographic surface is discretized, it can be expressed as:

The inversion formula for the virtual source strength is:

Further, the sound pressure of the actual sound source surface can be expressed as:

The sound pressure transfer matrix from the sound source surface to the holographic surface is expressed as:

Get the sound pressure on the sound source surface: 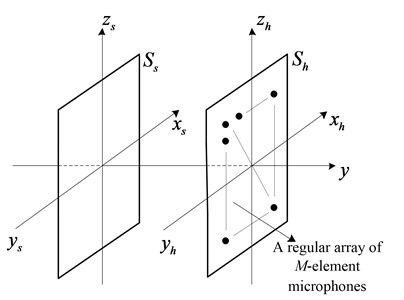 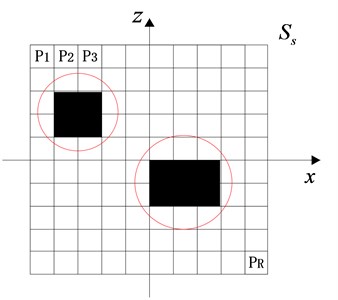 This is the sensing matrix, is the sound pressure matching matrix between the equivalent source sequence and a plane in the sound field:

The presence of a noise signal will affect the accuracy of sound source localization, where is the noise signal, which is directly recorded by the array, so Eq. (13) can be written as:

According to the flow of the OMP reconstruction algorithm [9, 10], it is necessary to input the sensing matrix , the observation vector , and the signal sparsity . In practice, a single virtual sound source is a small area element, which can be regarded as a collection of several point sources, so the input sparsity K can be approximated. Referring to the example of the OMP reconstruction algorithm given by Tropp [10], after knowing the relationship between the sampled value and the reconstruction success rate and the relationship between the signal sparsity and the reconstruction success rate, the sparsity can be determined.

The transfer matrix is known to be calculated in combination with and :

Subtract the two equations to obtain the separated sound field on any near-field plane that is a distance from the actual sound source plane:

Sound radiation model shown in Fig. 4. Both discs have a radius of 0.05 m and a thickness of 0.008 m. Both materials are alloy structural steels. The central axis of the two discs is parallel to the -axis, and the two discs are equally distributed along the -axis. The coordinates of the center of the discs distributed are (0.2, 0, 0.2) and (–0.2, 0, –0.2). A 10 N excitation force is applied in the normal direction at the center of both discs at a frequency of 500 Hz. 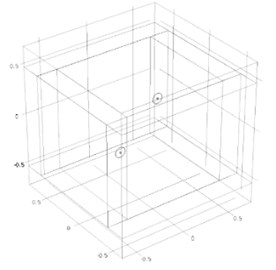 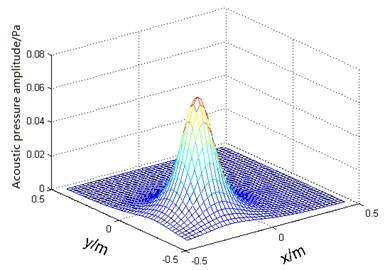 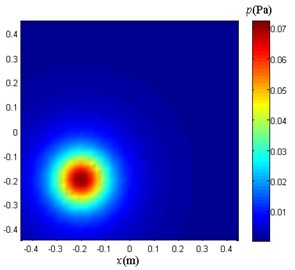 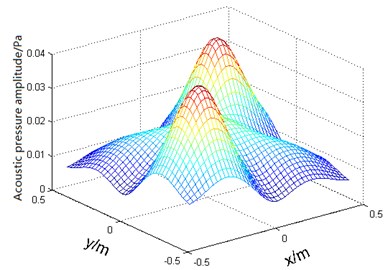 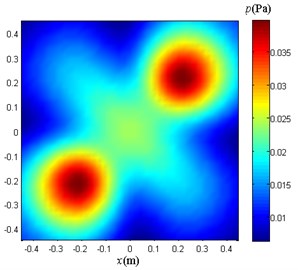 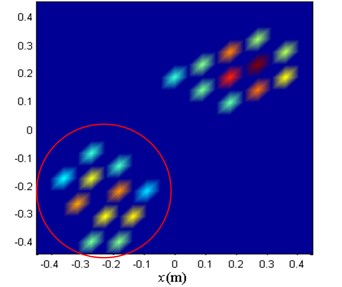 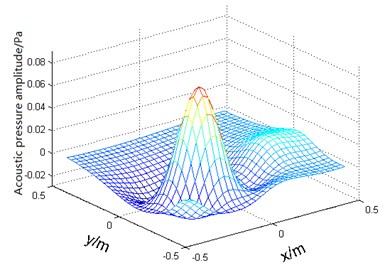 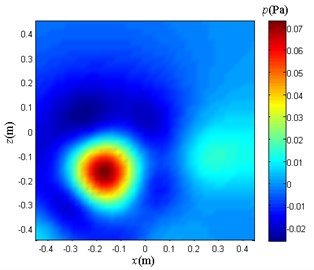 As shown in Fig. 9, a scatter plot is made for the difference between the calculated value and the theoretical value of the separated sound field, which is 41×41 points in total. The errors are all around zero. There are only little local errors, which is consistent with Fig. 8. 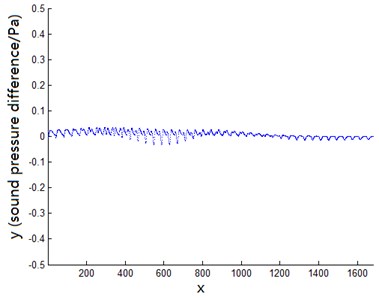 2) The separation of coherent sound field composed of two vibrating discs is simulated and the separation errors are small. The obtained results well prove the feasibility and effectiveness of the method.