Vibrational dynamic system for the reduction of solid materials

Copyright © 2019 Sergey Kazakov, et al. This is an open access article distributed under the Creative Commons Attribution License, which permits unrestricted use, distribution, and reproduction in any medium, provided the original work is properly cited.

A vibrational dynamic system is considered, designed for effective reduction of solid materials. Two system arrangements are presented. Using the results of the theory of synchronization of mechanical vibrators, formulas are obtained for assessing the steadiness and stability of self-synchronization of the unbalanced vibrators in the vibrational systems under consideration. The calculation results for the formulas obtained enable the selection of the most efficient and reliable structural arrangement for the vibrational dynamic system.

In most industries involving crushing and grinding of natural and technical solid materials, it is critical for the reduction to occur along the intergrowth surfaces of the crystals. This type of disintegration allows increasing the recovery of valuable components during subsequent ore processing and, for a number of materials, also significantly improves the processing properties associated with the shape and surface profiles of the crushed grains.

In view of the foregoing, the task of increasing the selectivity of crystal liberation and the reduction ratio in the disintegration of solid materials is one of the most important problems in mineral processing and in the processing of technogenic raw materials [1, 2].

One of the possible solutions to this problem consists in the creation of vibratory dynamic systems with advanced energy characteristics of oscillation excitation that would generate vibration effects on the material processed with the best processing profiles [3-6]. A vibratory cone crusher represents such a dynamic system. The use of unbalanced vibrators instead of an eccentric to drive the crushing bodies allows a transition from the crushing principle with the given material deformation to the crushing principle with the given force. In addition, the inertia drive makes it possible to significantly increase the oscillation frequency of crushing bodies and the crushing force, which is especially significant when reducing solid materials. The power and kinematic features of a vibratory cone crusher that ensure comprehensive loading of the material being processed also predetermine the high selectivity of crystal liberation and the high reduction ratios with the minimum recovery of fines in the material crushed. In addition, this crusher has a significant operational advantage: it prevents drive failures commonly occurring when unbreakable material pieces enter the crushing chamber. Therefore, a vibratory cone crusher may be used to implement the principles of streamlined material reduction to the fullest extent and to obtain a number of significant processing advantages.

Fig. 1. Schematic diagram of a vibratory cone crusher with flat oscillations of the working bodies 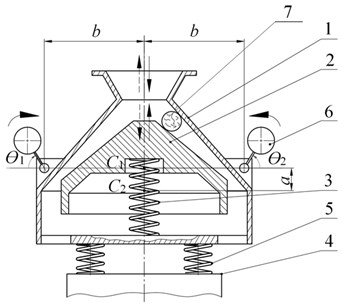 Fig. 2. Schematic diagram of a vibratory cone crusher with three-dimensional oscillations of the working bodies 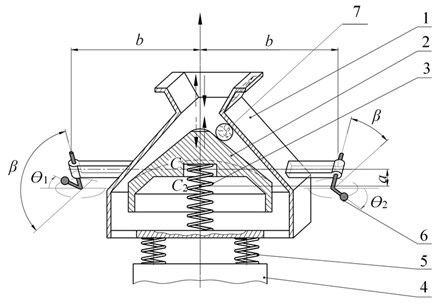 The crusher (Fig. 1, 2) contains a shell 1 and a head 2 that is connected to the shell 1 with the use of special packages of coil springs 3. The shell 1 and the head 2 may be regarded as absolutely rigid bodies. The working surfaces of the shell 1 and the head 2 form the crushing chamber. The shell 1 is fixed on the fixed support 4 using elastic shock absorbers 5. The unbalanced vibrators 6 are located in the shell 1 symmetrically relative to the vertical axis of symmetry of the machine and represent unbalanced rotors, rotated by two independent induction motors [9]. In the crusher shown in Fig. 2, the axes of the rotors of the vibrators 6 are inclined in the vertical plane in opposite directions at the angle of to the horizontal plane.

3. Evaluation of steadiness and stability of self-synchronization of unbalanced vibrators in a vibrational dynamic system

When selecting the vibratory cone crusher design with the best dynamics performance, it shall be assumed that efficiency and reliability of the machine are achieved through the steady and stable synchronous and in-phase rotation of its unbalanced vibrators. This regime always exists in symmetric vibration machines with two self-synchronizing vibrators. Forced oscillations of the shell and the head in this regime are vertical (Fig. 1) or helical (Fig. 2) and occur in phase opposition.

The steadiness of synchronous rotation of the vibrators at idle shall be assessed by the value of the dimensionless steadiness factor [10]. Recall that, for steadiness, this dimensionless coefficient must be positive. Moreover, its higher values correspond to greater steadiness margins. For the crusher under consideration, the expression for this coefficient is [11]:

Note that the value of angle 0 corresponds to the flat arrangement of the crusher (Fig. 1).

In order to assess the phasing stability of self-synchronizing vibrators at idle, the following approximate formula [12] is used:

For the crusher under consideration, the expression for the vibration coupling coefficient is:

Recall that, for stability, the condition below must be met:

where is the minimum acceptable value of the coefficient . According to the gradation of the relative strength of the vibration coupling between the vibrators mounted on a movable base, self-synchronization may be expected when 0,3 [12].

The baseline data for assessing the steadiness of synchronous rotation and the phasing stability of self-synchronizing unbalanced vibrators in a vibratory cone crusher are given in Table 1. 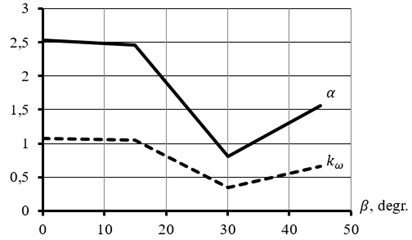 It may be seen in the graphs that the dimensionless steadiness coefficient is positive in the range of variation of the angle from 0° up to 45°, which indicates steady synchronous rotation of the vibrators at these values of . The value of this coefficient is the greatest when 0°. For the dimensionless vibration coupling coefficient , at 0°, Eq. (4) is the strongest. In this case, the relative strength of the vibration coupling between the vibrators is very high and self-synchronization and the accompanying phenomena are highly probable.

The paper considers two different concepts of a vibratory cone crusher, in which the principles of streamlined reduction of solid materials are implemented to the fullest extent. The theoretical study performed allows estimating the influence of the angle of inclination of the rotor axes of unbalanced vibrators to the horizontal plane on the steadiness and stability of synchronous and in-phase rotation of these vibrators in the crusher under consideration. It is found that, with the same machine parameters, an increase in the inclination angle of the rotor axes of the vibrators negatively affects the steadiness of synchronous rotation and the phasing stability of the self-synchronizing vibrators.