Copyright © 2019 Hoang Anh Tan, et al. This is an open access article distributed under the Creative Commons Attribution License, which permits unrestricted use, distribution, and reproduction in any medium, provided the original work is properly cited.

An engine rubber mounting is one of the important parts of a vehicle. It is a function to isolate or absorb and to reduce vibration to the vehicle body and the passenger. The concurrent engineering approach using the integration of TRIZ, morphological chart, and ANP methods approach was applied in the development of the conceptual design for the polymer composites automotive engine rubber mount component [1]. To reduce vibration and noise for heavy-duty trucks, the Genetic Algorithm (GA) method was adopted for the Powertrain Mounting System (PMS) optimization [2]. To improve the vibration isolation ability of the powertrain mounting system, considering the powertrain of front wheel drive car as the research object, the vibration decoupling rate and its corresponding frequency of the powertrain mounting system are analyzed by rigid body dynamics and energy method. The results show that the vibration isolation performance has been significantly improved more than 10 % [3]. The study proposes new setups in the suspension systems, including springs, shock absorbers and rubber mountings of the engine system to improve the passengers’ comfort levels. The combination of different sets of rubber mountings, springs, and shock absorbers were tested. The changes proposed in the study are analyzed in sequence and based on the results, the best combination is proposed [4]. Dynamic design and vibro-acoustic modelling issues for automotive structures are illustrated via two case studies: (1) the role and performance of passive and adaptive hydraulic engine mounts and (2) the importance of welded joints and adhesives in vehicle bodies and chassis structures which is highlighted via generic ‘T’ and ‘L’ beam assemblies [5]. The review on internal combustion engine vibrations and mounting systems are presented and analyzed in the references [6, 7]. For a better description of the characteristics of the vehicle engine shake performance, a full vehicle model with 14 degree of freedoms (DOFs) with hydraulic engine mounts (HEMs) was established to evaluate the effect of the HEM on the engine shake performance by comparing the results obtained from the known 13 DOF model [8]. However, in most studies full vehicle dynamic models do not consider the effects of ICE vibrations on vehicle ride comfort [10-13], or if there is, they only consider the effects of ICE vibrations themselves [9]. The major goal of this study is to establish a full-vehicle vibration model with 10 degrees of freedom under two combinations from the random road surface roughness according to the International Standards Organization (ISO) 8608 [15] and ICE excitations. The damping coefficient values are added into ICE rubber mounting system which are respectively analyzed and evaluated vehicle ride comfort according to the international standard ISO 2631-1 (1997) [16].

Many studies indicate that the vertical, pitch and roll angles of engine and vehicle body have the greatest impact on vehicle ride comfort, so a three-dimensional full-vehicle dynamic model with 10 degrees of freedom is established to evaluate influence of the adding damping coefficients into engine rubber mounting system on vehicle ride comfort, as shown in Fig. 1. 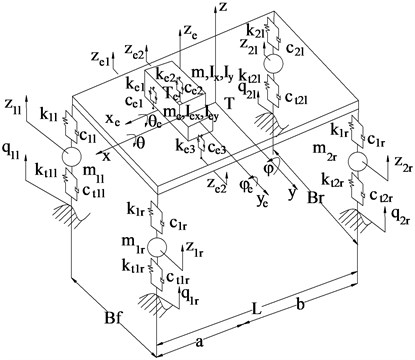 where, , is the distances between the front mounts and the centre of gravity (CG). The equations of motion for vehicle axles and body are written similarly.

The schematic of a lumped parameter model with internal friction damping coefficient is shown in Fig. 2(a). The vertical forces of the IC engine mounting system is defined as:

The schematic of a lumped parameter model with adding hydraulic passive damping coefficient is shown in Fig. 2(b). The vertical forces of the IC engine mounting system is defined as: 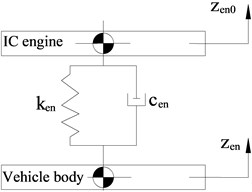 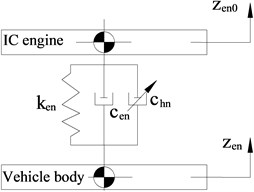 where, the spatial frequency range, , is divided into several uniform intervals which have a width of ; is PSD function (m3/cycle/m) for the road surface elevation, the power density in every small interval is substituted by where (1, 2,..., ) is center frequency among its intervals; is the wave number (cycle/m); is the random phase uniformly distributed from 0 to 2.

The engine is supported by three mounts arranged vertically and both the foundation and the engine are assumed to be rigid, the foundation has a large mass and the mount mass is ignored, as shown in Fig. 1. The vertical inertia force due to the reciprocating mass of the engine, the roll and pitch excitation moments of the engine [9] are defined as:

where, is the reciprocating mass of a piston, is the radius of a crank, is the ratio of to the length of the shaft, is the rotational frequency of the crank, is the distance between the CG and the centre-line of the second and third cylinders, is mean value of torque.

In order to analyze the effect of the different damping coefficient values of the mounting system on vehicle ride comfort, the mathematical model of the proposed full vehicle dynamic model with 10 degree of freedoms (DOFs) is developed in the MATLAB/Simulink to solve the vehicle differential equations in Section 2 with a set of parameters of original ICE engine and vehicle by the references [17]. The simulation results of the time domain responses of the vehicle body vertical, pitch angular, roll angular accelerations with road excitation when vehicle move on the ISO road surface class B at vehicle speed 20 m/s and engine speed 3200 prm (Case 1) and without road excitation when engine operates at speed 3200 rpm and vehicle speed 0 m/s (Case 2) are shown in Fig. 3.

a) At vertical motion of vehicle body 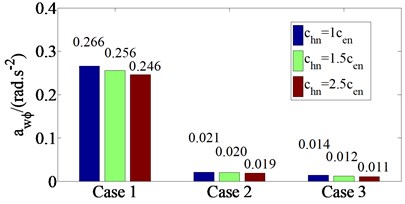 b) At pitch motion of vehicle body

c) At roll of vehicle body

The work described in this paper was supported by Thai Nguyen University of Technology for a scientific project (Code: T2017-B29).