Copyright © 2019 George Korendyasev, et al. This is an open access article distributed under the Creative Commons Attribution License, which permits unrestricted use, distribution, and reproduction in any medium, provided the original work is properly cited.

The increase in the number of speeds in automatic transmissions of vehicles leads to a convergence of gear speeds between adjacent gears. At low vehicle speeds, periodic changes in external driving conditions (for example, hilly or winding sections of roads) can lead to loop shifting between adjacent gears. To simulate this process, a dynamic transmission model is proposed, which can be used in the development of shift control systems and for calibration of the engine and automatic transmission at various operating modes and vehicle conditions.

The basis of the vehicle automatic transmissions (AT) control system is a gearshift map. Usually the map is built in coordinates of the vehicle speed, determined by the speed sensor of the output shaft of the AT, and the percentage of opening the engine throttle (Fig. 1) [1-5]. 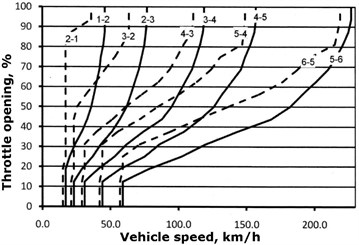 The solid lines 1-2, 2-3, 3-4, etc. on the shifting map are lines of shifting from lower to upper gears, and dashed lines 2-1, 3-2, etc. are lines of shifting from upper to lower gears. Solid lines are primarily determined by the technical characteristics of the engine (torque, rotation speed, fuel consumption) and the requirements of the driver. Throttle opening close to 100 % means that the vehicle speed needs to be maximized. The mid-throttle gearshift should be made to achieve some fuel economy with average acceleration. With a small throttle opening, gear shifting should provide the lowest fuel consumption. The dashed lines of reverse shifting are selected as a result of a compromise between the driving conditions, the requirements of the driver and the reserve of the engine torque.

As can be seen from Fig. 1, when the vehicle speed is less than 60 km/h, the shifting lines between adjacent gears are quite close. Periodic changes in the external conditions of the vehicle’s movement can lead to that the automatic gearshift control system will loop when driving at a constant speed in the zone of close values of the shifting speeds to adjacent gears. For example, such a regime can be observed on hilly roads, when moving downhill upshift occurs, and when moving uphill downshift occurs. An increase in the gearshift frequency leads to additional energy losses, an increase in fuel consumption, a reduction in the service life of the gearbox and a passenger discomfort [3, 4].

The purpose of the paper is to study and simulation the loop gear shifting process using a simplified dynamic model of the vehicle transmission. Modeling the process of gear shifting loop in order to predict the occurrence of this phenomenon and its prevention is important for creating adaptive automatic cruise-control systems, as well as automatic control systems for autonomous vehicles.

The dynamic model of a vehicle with AT is based on an analysis of the connection diagram and the characteristics of its components. High-speed transmission elements include movable engine elements, a torque converter (or clutch), and a gearbox input shaft with a clutch and pinion gear engaged. Medium-speed elements are the output shaft of the gearbox with driven gears and the driveshaft with the drive gear of the differential. The low-speed elements of the transmission are the movable links of the differential and the axle shafts with drive wheels. The body mass reduced to the axles is , where is the vehicle weight, depends on the slipping of the drive wheels on the road surface. Slip coefficient , where is the vehicle speed, is the angular rotation speed of the wheels; is the radius of the wheel. The coefficient depends on the road surface.

A simplified dynamic model of the vehicle’s 2-speed AT in accordance with the above description showed in Fig. 2.

Fig. 2. A simplified dynamic model of the vehicle’s transmission with 2-speed gearbox

The gear shift duration in modern automatic transmissions is 0.2-0.5 sec [3, 5]. Such a short gear shifting time allows to consider this process as a collision. The inertial torques caused by a sharp change in the speeds of the transmission elements significantly exceed the engine torque and the reduced torque of the resistance force in this case. The aforesaid allows to attribute the considered model (Fig. 2) to vibration-impact systems [7] and, firstly, to consider the actual process of gear shifting in the gearbox using the impact theory and the theorem on the change in the angular momentum of a mechanical system upon impact [8], and, secondly, to determine the initial conditions for solving the differential equations of vehicle motion on the intervals between gear shifts.

The theorem of angular momentum conservation upon impact for inertial elements and before and after the second gear is engaged:

where is the speed of the output shaft after the shift to second gear. Moreover, , then we get:

Similarly, the theorem of angular momentum conservation upon impact for inertial elements and before and after the first gear is engaged:

where is the speed of the output shaft after the shift to first gear. Moreover, , then we get:

The total moment of inertia of the engine and gearbox elements before the link with maximum flexibility can be considered at intervals between gear shifting after reducing the moment of inertia to the output shaft. This eliminates one of the three degrees of freedom in the dynamic model (Fig. 2).

The movement of the model in the -th gear () between the gear shifts is described by a system of two linear differential equations:

Free vibration frequencies of the model in the absence of damping: Frequency of damped oscillations: , where .

The movement of the model between gear shifts is a torsional vibration of inertial elements and relative to the center of mass, rotating under the action of the engine torque and the moments of resistance forces , . The center of mass motion of the model is the absolute model movement. The relative motion of the elements and are their synchronous torsional vibrations in antiphase, and the magnitudes of the oscillation amplitudes are inversely proportional to the moments of inertia [9]. The general solution of the obtained Eq. (1) has the form:

By differentiating Eq. (2), we obtain a general form of the equations of mass velocities in the -th gear () between the gear shifts:

The absolute speed is the initial center of mass velocity of the model in the th gear. Substituting and expressions of mass velocities are transformed to the form:

The angular coordinate Eq. (2) and the velocity function are continuous over the entire interval of motion, and the continuous velocity function at intervals is a discontinuous function with finite jumps between intervals. The last circumstance is a sign of the nonlinearity of the system under consideration, for solving the dynamics of which we apply the stitching method.

The conditions for stitching coordinates and speeds of the model at adjacent intervals when shifting from first gear to second are:

where is the time period between gear shifts.

The angular coordinates and velocities of the model elements before the first shift from the first gear to the second should be given or known if the model’s movement in the first gear is somehow specified: Eqs. (2) and (3).

Fig. 3. The graph of the changing the angular velocity at variable acceleration 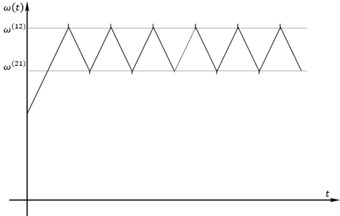 The general algorithm for calculating constants on the intervals of continuous movements according to known initial conditions includes the following steps:

2) A similar action with the fourth and third equations of system Eq. (5) and the following identical permutations:

The first two equations allow to determine and , the last equation allows to determine . The constant in the first interval of the model motion can be accepted equal to zero, and at subsequent intervals it is equal to the sum of the displacements of the model center of mass at previous intervals.

The movement of the model in second gear, described by Eqs. (2) and (3), ends at time , when the conditions and will be met. This is an important point for solving the issue of the existence of the effect of a gear shift loop.

A numerical simulation of the model motion carried out using the obtained dependences. The graph of the changing the angular velocity at variable acceleration is shown in Fig. 3.

A mathematical model is developed to simulate the processes of gear shift loop caused by the vehicle moving at a constant low speed along a hilly (or winding) section of the road. The model contains elastic and dissipative elements, a control system that generates gear shifting commands in accordance with the output shaft rotation speed sensor.

Relations are derived for determining the coordinates and speeds of transmission elements before and after gear shifts. A numerical simulation of gear shifting processes was performed, the possibility of gear shift loops was showed. The most effective way to eliminate unwanted gear shifting loop is to use navigation maps that take into account the topography of the road [10]. In addition, an effective method is to extend the boundaries of gear shifts on the gear shift map in the case of diagnosing loops [11].

The obtained mathematical model allows for any vehicle motion determine the conditions for the occurrence of loop gear shifts and develop measures to eliminate this phenomenon. The model can also be used in the development of automatic transmission gear shift control systems and for calibration the engine and transmission at various operating modes and traffic conditions.