Copyright © 2021 Maria Rita Xavier Sancho Rios, et al. This is an open access article distributed under the Creative Commons Attribution License, which permits unrestricted use, distribution, and reproduction in any medium, provided the original work is properly cited.

Several dentistry specialists have discussed the effectiveness of the treatment of Class III malocclusion in the primary dentition and the beginning of mixed dentition. Jaw functional orthopedics offers therapeutic resources to control this malocclusion at a timely age since it does not require dental anchorage. Children with Class III malocclusion have difficulty in chewing, phonation, and appearance is negatively affected. The unraveling of the bite, as soon as possible, is essential to offer the facial maxillary complex the proper function during the child’s development. The cases presented here demonstrate the immediate effect of these therapeutic resources. The patients (age ranging from three to five years old, three girls and one boy) sought orthodontic care because of anterior crossbite. They were treated at an opportune age through functional orthopedic devices to draw attention to these therapeutic resources and their immediate results. Additionally, through a search in the PubMed (MEDLINE) database, in April 2021, using the terms “class III malocclusion” and “early treatment” and using the time limit filter of the last ten years, in English, 28 articles from reviews and clinical trials were found. Of which, by reading the abstracts, 20 were selected. Classic books and articles on Jaw Functional Orthopedics were also consulted. This brief review aims to theoretically reference this article in which four clinical cases were described.

Mesiocclusion is characterized by the crossing of anterior teeth and has several definitions in the literature. In addition, it is characterized by an anterior-posterior dental discrepancy, which may or may not be accompanied by skeletal changes, such as posterior-anterior dental and facial discrepancies and sometimes with associated genetic components which may also present transversal and vertical problems, making it one of the most challenging malocclusions to treat, to control and to provide stability [1]–[4].

In mixed dentition, there are effectively three types of Class III malocclusions:

1. Dental: inclination or incorrect position of the maxilla or lower incisors.

2. Pseudo: anterior positioning of the mandible due to premature dental contacts that deflect the mandible anteriorly to allow the patient to achieve intercuspation.

3. Skeletal: true skeletal discrepancies either in the maxilla or in the mandible [1].

The American Academy of Pediatric Dentistry recommends that in primary dentition, crossbites should be diagnosed, and as they are unlikely to be self-correcting, they should be treated as early as possible to facilitate normal occlusal relationships. In mixed dentition, it recommends, among others, the treatment of crossbites taking advantage of the child’s growth and should aim to prevent adverse effects related to the child’s skeletal relationship. It recommends that habits of non-nutritive sucking, bruxism, atypical swallowing, abnormal tongue position, self-injurious/self-mutilating behavior, and obstructive sleep apnea should be observed in assessments of the development of occlusion [7]. Despite little evidence regarding skeletal factors and/or occlusal with temporomandibular disorders, there are some critical associations in some studies related to skeletal anterior open bite, steep joint eminence, overjet greater than six to seven millimeters, Class III malocclusion, Class II skeletal profile, unilateral posterior crossbite, and posterior crossbite [8].

However, several factors must be considered before starting the treatment of mesiocclusion, as Turpin has already described since 1953 (Table 1) [9].

Table 1. Factors described by Turpin that must be considered before addressing mesiocclusion

Therefore, the differential diagnosis of mesiocclusion is fundamental to determine what type of treatment we should choose.

In jaw functional orthopedics, it is mandatory to unravel the anterior bite, regardless of the type of mesiocclusion the patient may present. First of all, this unraveling is necessary to harmonize the bone bases in a more favorable position for the patient’s other needs, such as swallowing, phonation, chewing, and aesthetics [10]–[14].

By interpreting and applying the Prevention Levels in Occlusopathies, we know that in the Secondary Lower Level of the first Category applied to primary dentition, devices are placed only in certain patients with crossbite - anterior crossbites and in those with severe dysplasias [15].

It has been discussed in the literature about the effectiveness of treating Class III malocclusion at an appropriate age, always seeking stability, but most of these authors have studied the use of a face mask, few have used functional orthopedic devices in their studies, as shown in the table below (Table 2). This table is associated with a non-systematic search performed in PubMed using the following terms: “early treatment” AND “Class III malocclusion”.

In this article, four clinical cases will be described, with different functional approaches, with the objective of drawing attention to these therapeutic resources and their immediate results, modifying the mandibular posture and consequently, the dental skeletics and mandibular relation, enabling the maxilla and all the facial complex to receive adequate stimuli enabling better conditions for harmonious growth [10]–[14], [16].

In all the cases described, there is a new touch between the incisors, a new posture, and mandibular dynamics, respecting the principles of Jaw Functional Orthopedics.

History of the current disease: No reports of complications during childbirth, development, and sleep. Absence of harmful habits.

At the initial examination, she reported dissatisfaction with her teeth; On initial clinical assessment, she presented a mandible/maxillary discrepancy, the beginning of eruption of first molars, and permanent lower central incisors.

Upon lateral X-ray examination, the dental crossing of the primary incisors and maxillomandibular disproportions are observed.

Note the deficiency of the jaw in the photos in the lateral norm.

As its primary function, the chosen device has the mandibular rotation that induces a convenient lingual posture.

After one year of treatment, the clinical examination shows the unraveling of the anterior bite, a better mandibular-maxillary relationship, and a better-positioned maxilla.

History of the current disease: Healthy child, without any systemic complaints.

Family history: Without cases of mesiocclusion. Other types of malocclusion were not reported.

On clinical examination, mesiocclusion, without bone base discrepancy and harmonic profile. Facial image analyses evidenced a tendency to vertical growth with an open gonial angle. No numerical and cephalometric data is showed because, at that age, no validated parameters are yet established.

Proposed Therapy: In assessing priorities, the primary need was to uncross the anterior bite, leading to a more favorable occlusal condition. The equipment selected was an SPDT (Special Planas Direct Tracks) functional orthopedic device with a progeny arch.

The initial and expected results were achieved within 40 days

History of current disease: No systemic changes, no history of trauma or idiopathic dysfunction.

Proposed therapy: In the assessment of priorities, the previous uncrossing was offered by making direct tracks to teeth 51 and 62 with a light-cured composite resin. Physiological anterior overlap was achieved within 15 days of performing the tracks.

History of the current disease: No reports of complications during childbirth, development, and sleep. Absence of harmful habits.

Family history: No cases of malocclusion in the family.

The functional examination showed physiological protrusive movement. Bilateral chewing, phonation, and swallowing without alterations. On the X-ray examination in the lateral view, an open gonial angle was observed, an acute notch, an increase in the lower anterior third of the face.

Proposed therapy: Functional orthopedic device type SN3 with progeny arch, used for one year. As its primary function, the chosen device has the mandibular rotation that induces a convenient lingual posture. After four months of using the device, the bite was uncrossed. 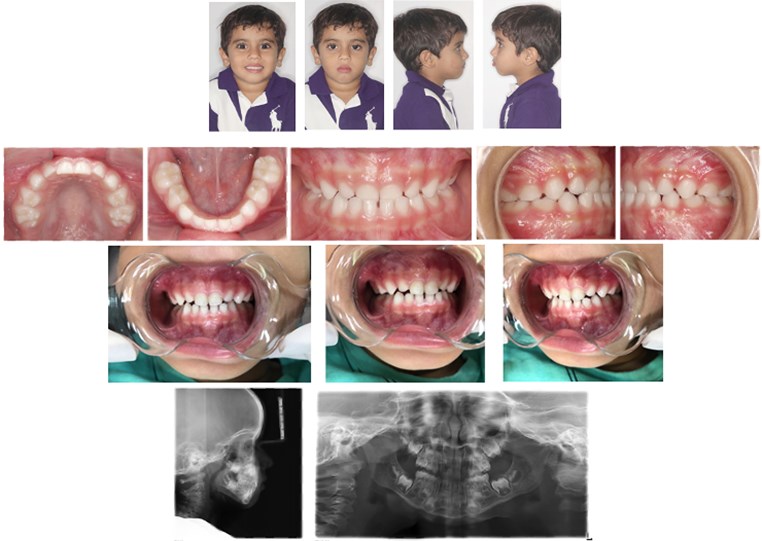 Fig. 5. Extra- and intraoral photographs; teleradiograph (on the right)

It has already been demonstrated that the early management of Class III malocclusions has a substantial influence on the short- and long-term outcomes. The main objectives of early intervention are to provide a more favorable condition for proper growth and improve the facial relationship, for example, to correct crossbite and facial aesthetics [10]. In addition to prevent changes in soft tissues or even bone tissue, to improve skeletal relationships, which in turn minimize excessive dental compensation, such as retroinclination of the lower incisors, which will enhance occlusal function since class III malocclusions with anterior crossbite are often accompanied by mandibular functional changes, simplifying the comprehensive treatment of class III, because in many cases, early orthodontic or orthopedic treatment can eliminate the need for future surgical treatment and even if surgery is eventually necessary can minimize the length of the surgical procedure [11], and finally, to provide a more pleasant facial esthetics, thus improving a child’s psychosocial development [4].

In all the cases described, there is a new touch between the incisors, a new posture, and mandibular dynamics, respecting the principles of Jaw Functional Orthopedics.

Many authors agree that the need for early diagnosis and intervention is vital for a favorable prognosis, although long-term stability is related to favorable growth, in the treatment of class III malocclusion, doubts are related to the chosen therapy [1]–[4], [7], [10]–[12], [14]–[22].

Maxillary protraction is the treatment of choice in most cases, but it is necessary to look carefully at interventions in primary dentition and before the eruption of permanent molars, as these cases often evolve into orthognathic surgery and are treated at a timely age, and may prevent or even decrease the surgical supply [1]–[3].

In Jaw Functional Orthopedics, it is mandatory to unravel the anterior bite regardless of what type of mesiocclusion the patient presents. In addition, by correcting Class III malocclusion during primary dentition, a new occlusion will lead to the correct stimuli for the harmonic development of the facial maxillary complex [7]. According to the American Academy of Pediatric Dentistry, the presented clinical cases exemplify the benefits of the early treatment of mesiocclusion, offering the patients adequate incisive touch, which allows a harmonic occlusion relationship.

Jaw Functional Orthopedics is an option to correct mesiocclusion at an early age.

There is a need for high-quality clinical trials to identify effective interventions to treat previous anterior crossbites at a timely age.