Copyright © 2021 Marta Marques da Silva, et al. This is an open access article distributed under the Creative Commons Attribution License, which permits unrestricted use, distribution, and reproduction in any medium, provided the original work is properly cited.

Despite the existing absence of scientific community concordance for the current definition for general health by World Health Organization (WHO), it is legitimate to say that oral health is a major part from general health and its lack shows if a person is generally healthy or not [1, 2]. The current definition of oral health was recently updated to “multifaceted and includes the ability to speak, smile, smell, taste, touch, chew, swallow, and convey a range of emotions through facial expressions with confidence and without pain, discomfort, and disease of the craniofacial complex”. Therefore, it has a three core elements related to his condition of status, physiological function and psycho-social function who are influenced by driving determinants, moderating factors and overall health and well-being of each person [3]. A poor oral health is usually related to inadequate access to dental services and has been presented with tooth decay, lack of tooth brushing and un-healthy habits such as high sugar in-take and smoking [1]. Correct execution of stomatognathic system functions leads to correct stimuli of craniofacial growth. Tooth decay can impair them to be executed in their plenitude [4]. According to Wilma Alexandre Simões, promoting the correct execution of oral functions is the best way of working on the prevention of oclusopathies and the noble level of prevention includes diminishing of caries incidence [5].

The difficult access to health services occurs in rural areas of many countries. Children suffering from severe untreated tooth decay are usually left without treatment or it is performed extraction in order to oral pain relieve [6-8]. These procedures severely impact the correct stimulus of craniofacial growth [9]. These conditions are preventable by following an evidence-based public health approach and adopting preventive measures since early age [10-12]. A decrease in the prevalence of dental caries is observed in developed countries that have established public health programs using fluoride for dental prevention, coupled with changing living conditions, healthier lifestyles and improved self-care practice [8, 13].

Guinea Bissau is a western African country, labeled as one of the poorest countries in the world where the life expectancy is estimated in 55.8 for women and 52.8 for men with 42 % of its population being under 15-years old [14, 15].

To evaluate the effectiveness of a school-based preventive oral health program on reducing the dmft (decay, missing and filled teeth for deciduous dentition) and DMFT (Decay, Missing and Filling teeth for definitive dentition) index among schoolchildren from a rural area of western Africa – Uno’s Island in Guine Bissau.

This study was performed in seven pre- and primary schools in Uno’s Island (archipelago of Bijagós). This area is typically rural and not densely populated. In this area there is not a local ethics committee so the authorization to perform the program and collect the data was given by oral informed consent from local school-authorities. The data collected did not mention the names of the children, only their acronyms, age and gender. The study started with 418 students in 2013 and ended with 593 students in 2016, from pre-school to 4th grade. The age range was from 5 to 16 years old with mean (SD) age in 2013 of 8.87 (2.54) and in 2016 of 9.47 (2.45). Students in school older than 16 were included in the program but excluded from data analysis. Table 1 demonstrates the program/study design and respective activities in each year.

Table 1. Basic longitudinal study design with description of activities in each year and month.

During 3 years, the children from pre-schools and primary schools in Uno’s Island had oral health education at school twice a year by two Portuguese volunteer dentists from the NGO-D Mundo a Sorrir. The language used was Portuguese translated by a local interpreter to the vehicular language – crioulo.

The oral health education focused on oral health, dental plaque, caries and how to prevent it introducing toothbrushing technique and advices on healthy diet. The educational materials used were always the same to support the learning process and were designed by the NGO-D Fig. 1(a), 1(b). 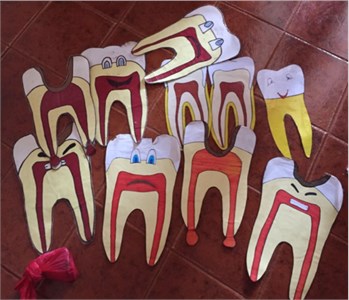 a) Educational material used on the lectures

1) Structure of the tooth,

After the lecture, the students were aligned in rows and a topical fluoride gel application was performed (12.500 ppm) in disposable trays for 4 minutes, according to WHO guidelines [13]. This happened twice a year, with exception of the year 2014 when it happened once due to financial problems in the project and political instability in the country.

During 3 years, the children received a toothbrush and fluoride paste once a year. The concentration of fluoride in the toothpaste delivered was 1450 ppm.

Dental screenings were performed in daytime with help of a LED headlight, mouth mirror and no probe as seen in Fig.2. Information on both deciduous and permanents teeth was given by dmft/DMFT code. Two Portuguese practicing dentists carried out the screenings during the 3 years, after the lecture and before the topical fluoride gel application. 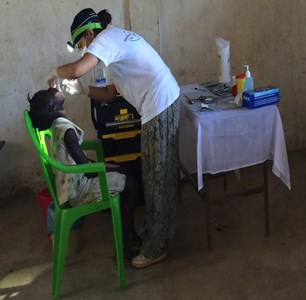 Prior to examination, the Portuguese practicing dentists had participated in trainings provided by Portuguese NGO-D Mundo a Sorrir as part of their training process for all of the activities in the project. The theoretical component of the training included the following topics:

The pratical part consisted in participating in similar activities of oral health education and dental screenings in children in Portuguese schools. During the practical part the dentists were calibrated. Due to practical reasons was not possible to analyse the inter-rater realiability.

A total of 7 schools, preschool plus primary, participated in the NGO program during 3 years. The characteristics of children’s age and gender obtained at baseline and year 3 are shown in Table 2. The mean age in baseline was 8.87 (2.5) and in the end was 9.47 (2.5). Reasons for the increased number of students from baseline to end is explained by the fact that the new pre-school classes had more new students than the students finishing the primary school (fourth grade).

Table 3. Minimum, maximum, mean and SD scores of dmft/DMFT from baseline and year 3

Diferences between the total mean (SD) scores for dmft/DMFT between baseline and year 3 shown a reduction of 56.6 % for the dmft scores and a reduction of 73.2 % for DMFT scores. These scores were found to be statistically significant ( 0.00). Table 4 summarizes all the data.

As far as our knowledge, we have not found a previous study with an exact same preventive protocol like the one of the present investigation nor a study of caries prevalence in this country. Most of the articles published on school-based oral health programs use different combined interventions to address educational and preventive oral health and different methodologies to determine their effectiveness [16-20].

Our program targeted school children from pre-school until the end of primary school in an underserved rural area of Guinea-Bissau, western Africa (Uno’s island in archipelago of Bijagós). The decision to start a preventive school-based program was according to previews studies [21, 22], that demonstrated schools as effective platforms for the promotion of oral health and because of the fact that these programs have high participations rates, resulting as positive feedback from school-staff and community.

Before the program started, the authorities from the school informed that usually the children brushed only once daily with a stick of a plant with carcoal Fig. 3. This information led to the design of the oral health program by the NGO-D.

The results of the present study show a reduction on prevalence of decay, by determining and comparing the dmft/DMFT in 2013 and 2016. At baseline, prior to any interventions, the mean (SD) dmft score was 0.76 (1.30) and the mean (SD) DMFT score was 0.56 (0.99). These values are lower than the global standard identified by WHO and are in concordance with previous studies taking in rural areas where the DMFT score was considered low (≤ 1) [23, 24]. On the other hand, there is also some evidence in Asia where the prevalence of caries was found moderate in rural and tribal communities [25].

This reduction on dmft/DMFT index is in concordance with other studies, despite the use of different combination of interventions [16, 18, 20]. The exact contribution of each of these interventions is difficult to assess. However, evidence shows that interventions involving the use of fluoride are strong. In this program the 1450 ppm fluoride toothpaste and topical fluoride applications had a fundamental role. The last studies have stated that when a population is exposed for the first time to long-term topical fluoride, a decline in caries incidence among the youngest members of a community will be evident after about 2 years [13], and that fluoride is more effective in caries prevention when administered in a low constant level [8, 13, 26].

The lectures on oral health promotion might have had an important role since they were given twice per year. Although some studies suggest a lack of evidence that dietary advice and oral health promotion are effective in caries prevention [26], other studies state that adapted health promotion approaches are increasingly viewed as the long term strategies to prove clinically and cost effective for preventing, or improving health outcomes in those with established disease [10, 12, 27].

In the future, systematic reviews and guidelines developers should be encouraged to distinguish the evidence collected from each specific school-based program according to different ethnic, minority and rural/urban population, in order to understand which program is more suitable for determined target [12, 27]. Furthermore, children oral health campaigns/school-based program need to focus not only in how to prevent diseases, but also treat them when in need. In regarding to prevention of caries in schools, it is important to reduce its incidence in the primary dentition when there is a need of treatment and lack of schoolchildren’s quality of life. It is extremely important to understand that preventing caries also prevent malocclusions [28]. So the relevance of these programs are enhanced with this view.

Schools seems to be a great place to promote oral health and initiate a prevention program since they represent an easy way to target a big group of people from a community (students, school staff and parents). In this study the preventive oral health program implemented in Uno’s Island (Guinea Bissau) was effective in reducing the dmft/DMFT index of schoolchildren after 3 years. Oral health promoting approaches may be seen as a long-term cost-effective strategy to prevent oral diseases and improve health outcomes in children and future adults in unprivileged communities.

The present study gives new information about children's caries status in a rural and isolated area in Guinea-Bissau, western Africa, prior and after a school-based oral health preventive program implementation. To our knowledge there are no previous studies in this geographical area, determining a low level of dmft/DMFT index in this population.

The strategies present in this school-based program lead to a statistically significant reduction in the caries level in children involved and seems to be capable of transforming lives and the future of the community where is being developed and can impact also on the malocclusion prevalence. For the success of this program it is always important to take notice of the needs and cultural and social characteristics of the population in order to better acceptance, satisfaction and retention of the participants.

We acknowledge NGO Mundo a Sorrir staff for developing and continue to promote programs like the one here described. We also thank you to all volunteers who participate in the activities between 2013 and 2016. A special thank you to the local partners in Guinea Bissau and sponsors who allowed this program to be developed.