Copyright © 2018 Chi Xu, et al. This is an open access article distributed under the Creative Commons Attribution License, which permits unrestricted use, distribution, and reproduction in any medium, provided the original work is properly cited.

Among various techniques for implementing the MEMS accelerometer, modulator provides the combined benefits of force feedback and inherent analog-to-digital conversion [6]. The sensing element of MEMS accelerometer can be modeled as a mass-spring-damper system, which provides a 2nd order dynamics. Therefore, a traditional MEMS accelerometer is mainly focused on using the sensing element as a low-pass filter to form a 2nd order modulator [7]. At present, many researchers have mainly focused on using the additional electronic integrator as a loop integrator to form the high order closed-loop modulator to improve its SNR and noise performance [8]. There are a lot of advantages to the high order closed-loop modulator, nevertheless such this architecture may suffer from the overall system instability. As discussed, a modulator, which can both achieve high SNR, outstanding noise performance and also ensure the system stable, is much difficulty to be designed. It is shown that the Sigma-Delta modulator system can be studied as a nonlinear dynamical system with feedback control [9]. Representing a modulator as “plant” and “controller” transforms a modulator design problem into a control design problem. Therefore, many researchers introduced several advanced control techniques to Sigma-Delta modulator. In ref [10, 11], a high-order Sigma-Delta modulator design by slide mode control is proposed, which can precisely predict the modulator performs and reduce the nonlinear effect from the 1-bit comparator; In ref [12], a Kalman state estimator is applied to a Sigma-Delta micro-accelerometer which can enhance the resolution of the Sigma-Delta modulator. In this paper, we present an approach that ensures a better control of the proof mass displacement thanks to the proposed fractional-order disturbance observer, which is able to improve the noise performance and system robust stability.

In practice, a physical motion system cannot be exactly the same as any mathematical model, no matter how the model is obtained [13]. In the system of a MEMS accelerometer, a precise mathematic model of the sensing element which may not be readily available because of the external disturbance (temperature, pressure) or dispersions in the manufacturing process. Thus, the mismatch between the real and ideal parameters can result in relatively large proof mass displacements and as a consequence in a decrease of the overall system performance. The concept of disturbance observer (DOB) was proposed in ref [14], which is able to improve the ability of disturbance rejection. The filter in DOB belongs to the low-pass filter called Q-filter. The so-called Q-filter has three adjustable parameters, including the order, the relative degree and the bandwidth. Therefore, compared to integral action, DOB offers more opportunities to improve the performance of the control system (rapidity, stability, phase shift etc.) through tuning the three parameters of Q-filter. In ref. [15], a fractional-order disturbance observer (FO-DOB) based on a fractional-order Q-filter was proposed and thus extending the integer-order disturbance observer to a new fractional-order one. The fractional-order Q-filter is employed to make a tradeoff between the robust stability and the disturbance suppressing force. Therefore, in this paper, FO-DOB is employed to observe and compensate the disturbances and model mismatch of the sensing element, which is able to make the overall system have better robust stability against variation of mathematic model of the sensing element and then ensure MEMS accelerometer achieve high SNR and satisfactory noise performance.

The basic idea of the conventional DOB is to apply a nominal inverse model of the plant to observe the disturbance which caused by external interference and parameters variation, and then an equivalent compensation is generated by DOB. The basic architecture of DOB is depicted in Fig. 1.

Unfortunately, the implementation of the conventional DOB encounters three key problems in a practical system [8] as follows:

1) In general cases, the relative order of is not equal to zero, therefore the inverse of the plant model cannot be obtained.

2) The transfer function of the plant model cannot describe the practical system precisely, that is to say is not totally accurate.

3) The existence of the measurement noise will deteriorate the control performance of control system.

In order to solve the above three problems, a Q-filter and a transfer function are introduced, which is shown as in Fig. 2. 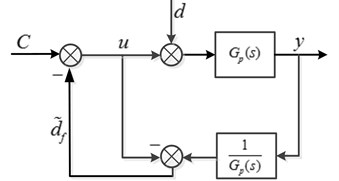 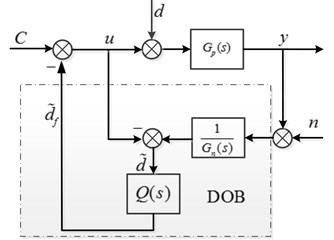 In Fig. 2, is a low-pass filter, which is used to restrict the effective bandwidth of DOB. and are the disturbance observe before and after by the Q-filter.

The relation between the real model and ideal model can be expressed by:

In order to simplify design process of the low-pass Q-filter, an equivalent block diagram of DOB is shown in Fig. 3.

It can be seen from the block shown in Fig. 3, the disturbance observer is a high gain technique when . To simplify the analysis of uncertain transfer function , here we assume is the only source of uncertain dynamics, so can be rewritten as:

By observation from Eqs. (5) and (7), the uncertain transfer function is written as:

In this paper, the low-pass filter can be expressed as:

where cutoff frequency , here we set 0.2 ms, 50 rad/sec, 100 rad/sec, 500 rad/sec, so the uncertain transfer function and three are rewritten as follows:

The robust stability of DOB with respect to the cutoff frequency of is depicted in Fig. 4.

Fig. 4. The robust stability of DOB with different cutoff frequency

Fig. 5. The robust stability of DOB with different orders 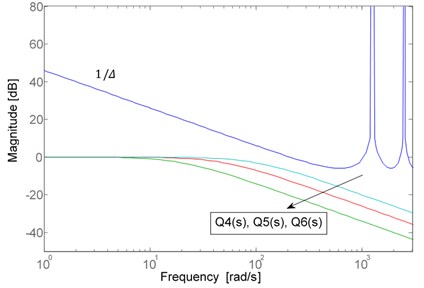 Fig. 6 shows the bode curves of the fractional-order filter with different .

Fig. 6. Bode curves of with different 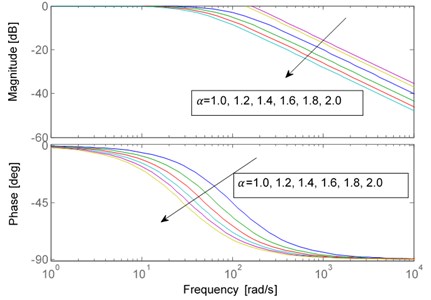 3. Implementation in the case of a modulator

The general system block diagram of modulator is shown in Fig. 7.

The sensing element can be modeled as a mass-spring-damper system, a 2nd order dynamics with transfer function that can be expressed as Eq. (18):

where is the proof mass, is the damping coefficient and is the spring constant. Due to the parametric yield errors, and are not always the actual values caused by manufacturing process. So, FO-DOB is employed to observe and compensate the model mismatch of the proof mass. The proposed architecture of the closed-loop modulator with a FO-DOB is given in Fig. 8.

Firstly, the Simulink model of the proposed modulator with a FO-DOB is developed shown in Fig. 9.

Fig. 9. Simulink model of the proposed modulator with a FO-DOB

In Fig. 9, the oversampling ratio (OSR) needs to be specified in the modulator system. Here, we choose sample frequency as 128 kHz, and OSR = 64. The mechanical and system parameters in the proposed architecture of the closed-loop modulator with a FO-DOB are listed in Table 1.

Table 1. Parameters of the proposed architecture

Two numerical experiments of the proposed architecture have been performed in the following.

Case one. A 5th order closed-loop modulator with the FO-DOB.

In this case, we choose the digital integrator for the closed-loop modulator as follows:

Due to the system of sensing element responds quickly, in Fig. 8 is set as 0.2 ms, and has been adjusted empirically, so finally is selected as 2.4 to inspect the effects of FO-DOB. 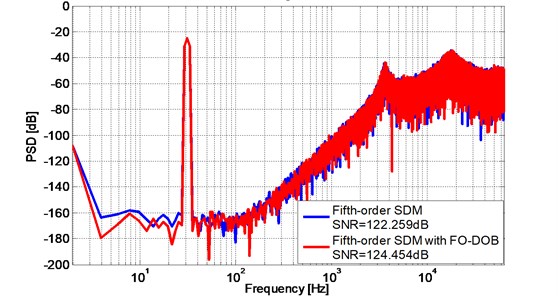 In this case, we choose the digital integrator for the closed-loop modulator as follows: 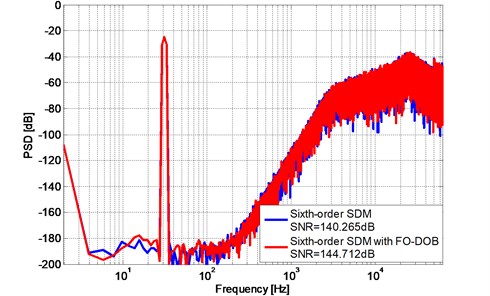 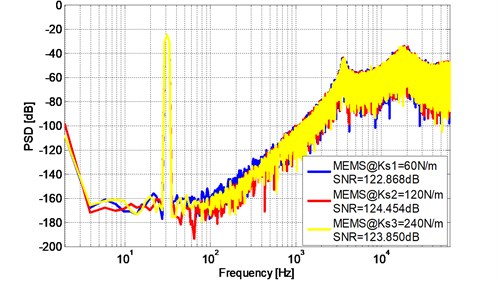 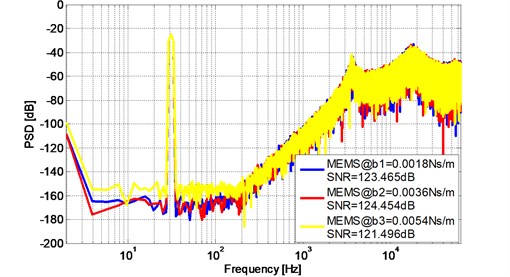 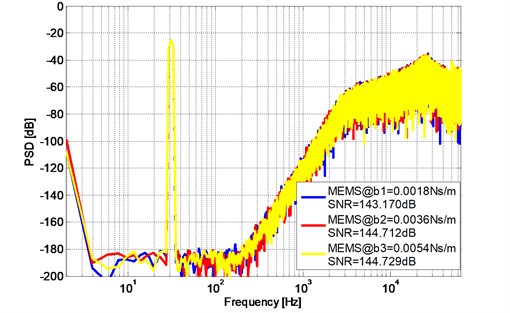 This work was supported by the research fund to the top scientific and technological innovation team from Beijing University of Chemical Technology (No. buctylkjcx06).