Copyright © 2018 Abhijeet Chatterjee, et al. This is an open access article distributed under the Creative Commons Attribution License, which permits unrestricted use, distribution, and reproduction in any medium, provided the original work is properly cited.

The natural frequency and modes shape of the plate is given by Eq. (1):

where [] is the stiffness matrix and [] is the mass matrix while is the mode shape of structure and is the corresponding natural frequency of the plate in rad/sec. The non-dimensional frequency parameter is given by Eq. (2):

where is the flexure rigidity , is Young’s modulus of elasticity, is Poisson’s ratio, is thickness of the plate and is density of plate.

Fig. 1. Acoustic radiation due to the vibration modes of unbaffled plate in direction enclosed in a sphere 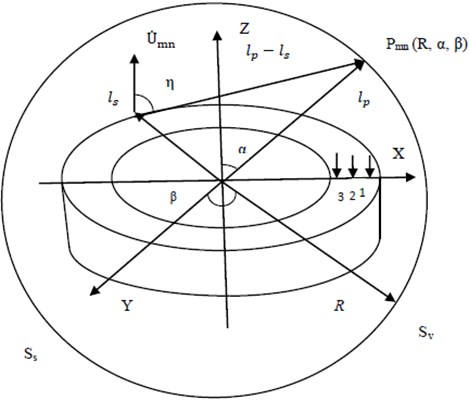 The structure sound radiation obtained by Rayleigh integral [1] is given by Eq. (3):

where, is the sound pressure amplitude, is the surface of the sound source, is the Green function in free field, and is the position vectors of source and receiver and , is the surface normal vector at . If, is the mass density of air, is the speed of sound in air, is the corresponding acoustic wave number, and and are the corresponding vibratory velocity amplitude and spatial dependent vibratory velocity amplitude in the direction at . The sound pressure radiated from non-planar source in far and free field environment based on plane wave approximation can be expressed by Eq. (4):

The modal sound pressure for an annular plate with (, )th mode is obtained from simplifying Eq. (4) with Hankel transform and is expressed by Eqs. (5), (6):

where is Bessel function of order , (, ) are the cone and azimuthal angles of the observation positions, respectively, is the angle between the surface normal vector and the vector from source position to receiver position, and is the Hankel transform. According to the far field condition, in the denominator is approximated by where is considered to be radius of the sphere. If is acoustic intensity and is control surface then the modal sound power for the (, )th mode [1, 6] from the far-field is given by Eq. (7):

where, is the spatially average r.m.s velocity for two normal surfaces. Considering the plate thickness () effect, the sum of sound radiations [6] from two normal surfaces of the plate at ( 0.5 and –0.5) will represent the modal sound power which can be given by Eqs. (9)-(11):

2.3. Thickness variation of the plate

where, 2 for parabolic profile.

The total volume of the plate is kept constant and is given by Eq. (17):

For validation of modal frequency of thick annular isotropic plate, the published result of Lee et al. [1] is taken as reported in Table 2. From Table 2 it is clear that the results obtained in this paper matches well with the published results [1]. For acoustic power calculation the computed analytical, numerical and experimental results [1] are considered as reported in Fig. 3. From Fig. 3, a well and good agreement of computed acoustic results obtained analytically, numerically with published experimental results [1] is seen and matches well with each other.

Table 1. The specification and the material properties of the annular circular plate

Table 2. Comparison and validation of frequency parameter of isotropic annular circular unloaded plate for taper ratio, 0.00 obtained in present work with that of Lee et al. [1] 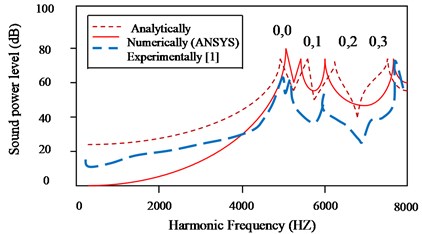 The sound power level (dB, reference = 10-12 watts) of parabolic tapered annular circular plate at different excitation locations are investigated by applying concentrated load under time-varying harmonic excitations. The frequency range of 0-8000 Hz is taken. From Figs. 4(a)-(c) it is observed that for all cases of thickness variation and for excitation frequency up to 1000 Hz, effect of different excitation locations and stiffness variation due to taper ratio 0.75 do not have significant effect on sound paper radiation for clamped-free boundary condition. 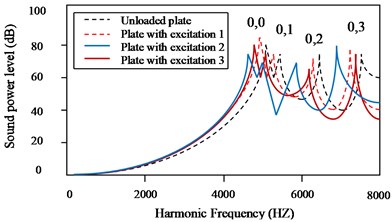 a) Case I plate (parabolic decreasing) 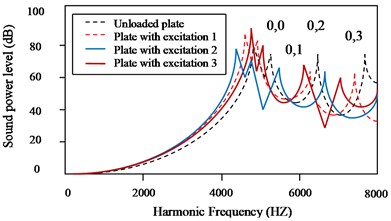 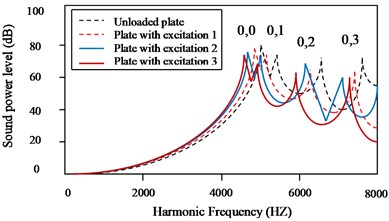 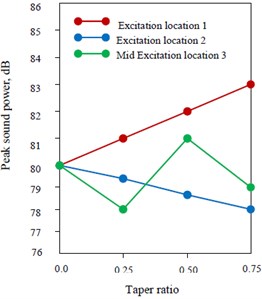 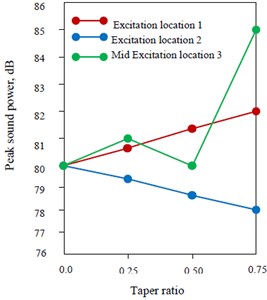 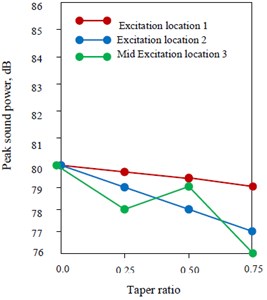