Copyright © 2018 Li Bai-zhou, et al. This is an open access article distributed under the Creative Commons Attribution License, which permits unrestricted use, distribution, and reproduction in any medium, provided the original work is properly cited.

where , , and are normal and tangential components of magnetic flux densities on the surfaces of two mediums, respectively. and are the magnetic permeabilities, respectively.

On the other hand, the electromagnetic volume force can be expressed as:

The double-shell stator structure is shown in Fig. 1. The electromagnetic volume force generated by eddy current in the stator core can be projected in three directions as:

where , , are cylindrical coordinates, respectively. Electromagnetic field only exists in the core, therefore Eq. (4) can be simplified on the middle surface of the stator shell as.

According to the author's previous work [7], the magnetism and solid coupling vibration differential equation with modal damping can be improved as:

where is modal damping coefficient, and is the natural frequency of double-shell system. The first term at the right end of the equal sign reflects the effect of the ponderomotive force (Lorentz force) produced by the electromagnetic field inside the stator core. And the second term reflects the effect of the electromagnetic force (air gap magnetic pull) on the stator core. 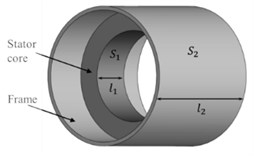 4. The solution of electro-magnetic field inside the stator core

where is electric field intensity vector, is conductivity, furthermore, , , and .

Through simplification and deduction of equations, the expressions of magnetic flux density and eddy current density inside the stator core are:

And the electromagnetic force produced by the eddy current inside the stator core can be expressed as:

Substituting Eq. (9) into the third equation of Eqs. (6), the eddy equation can be derived as:

Solving this Helmholtz equation by the method of separation of variables, the magnetic potential can be obtained based on the boundary conditions. And furthermore, substituting it into Eq. (7) and Eq. (8), the magnetic flux density, eddy current density and electro-magnetic forces can all be solved.

Take a three-phase asynchronous machine as an example to discuss the influence of geometric parameters on electromagnetic field and forces. 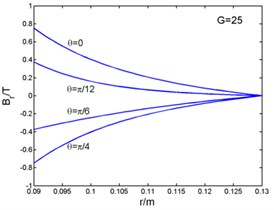 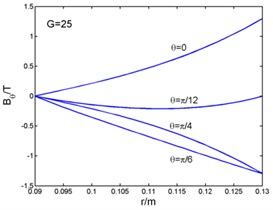 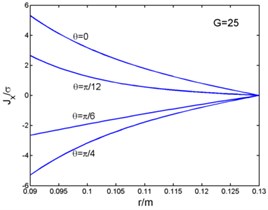 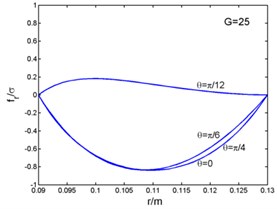 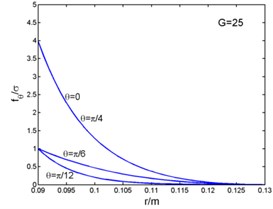 Fig. 3 shows that the magnetic flux density and , eddy current density and electro-magnetic forces and ( and in the Fig. 3) curves with the changing of angle. And the angle can be taken as (1, 2, 3...). The figures illustrate the variation of physical quantities in one circumferential range with different radii. The radial and circumferential components of the magnetic flux density and the eddy current density are in the form of four times harmonic harmonics in a period. But the electromagnetic volume forces are in the form of eight times harmonic harmonics in a period. When this frequency is related to the natural frequency of the stator system, and meets the modal coupling relationship, the stator system will excite principal parametric resonance, subharmonic resonance and superharmonic resonance, and so on. 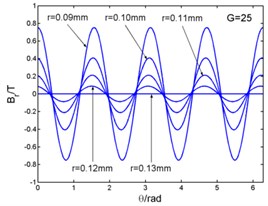 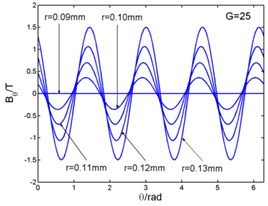 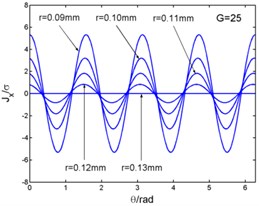 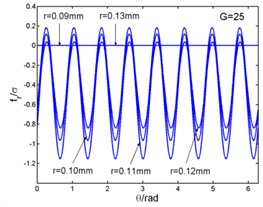 The qualitative analysis of electromagnetic field and force illustrate the variation law of physical quantities and frequency relation. The method presented in this paper can be extended to the case where the high-order harmonic magnetic potential of stator and rotor windings is taken into account. The work in this paper also lays a foundation for the analysis of the magnetism and solid coupling vibration mechanism between the stator and rotor.