Copyright © 2022 Zhengyang Li, et al. This is an open access article distributed under the Creative Commons Attribution License, which permits unrestricted use, distribution, and reproduction in any medium, provided the original work is properly cited. 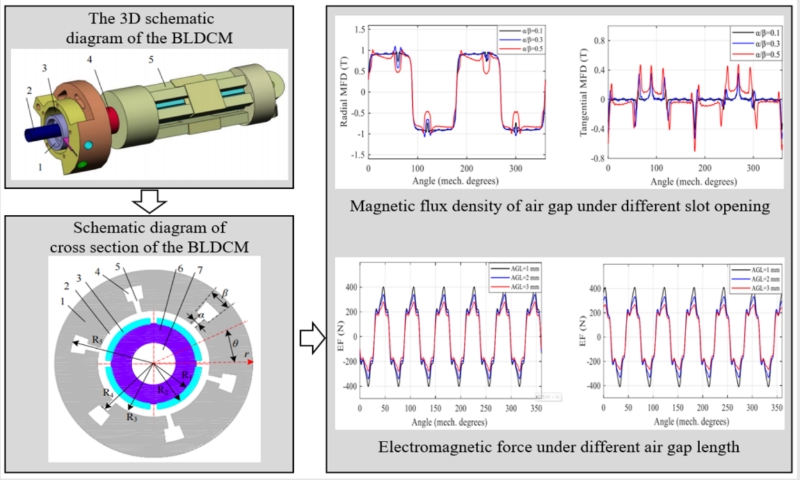 Due to the traits of high efficiency, easy control, long-life, simple construction and so on, the BLDCM is widely used in the various fields, especially in the home appliance [1]. For example, the BLDCM within the rolling rotor compressor is selected as the driving motor in the air conditioning. The vibration of the BLDCM could directly affect the running performance of the overall system, which is mainly caused by the electromagnetic excitation [2].

The research methods for the motor electromagnetic fields mainly include the analytical method, the finite element method (FEM), the graphical method, and so on. The FEM can ensure the predicted accuracy, but it will loss the efficiency. The analytical method shows the good calculated efficiency. Such as, Zhu et al. [3] investigated the effect of stator slotting on the radial magnetic field distribution. Dubas et al. [4] developed a new analytical solution for the multipole surface mounted permanent-magnet motors, where both the radial and parallel magnetization and the slotting effect were considered. Then, Zhu et al. [5] built an accurate analytical subdomain model for the magnetic field computation in surface-mounted permanent-magnet machines. Additionally, Lubin et al. [6] also proposed an analytical subdomain model to compute the magnetic field distribution in surface-mounted permanent-magnet motors with semi-closed slots, where the expression and solution of this model show more simplified and simple. He et al. [7] investigated the influence of rotor eccentricity on the electromagnetic performance by the finite element analyses and experiments.

2. Analytical model of magnetic field of the BLDCM

The BLDCM in this paper is inside the rolling rotor compressor used in the refrigeration equipment, such as air conditioning, refrigerators, and so on. The motor mainly consists of the rotor, stator, rolling rotor, shaft, sliding bearing and shell, whose 3D structure is shown in Fig. 1. The rotor, rolling rotor and sliding bearing are mounted on the same rotating shaft. During running, the BLDCM drives the rotating shaft and rolling rotor to rotate, which changes the volume of the working cavity composed of the rolling rotor and air cylinder to compress gas. As the basis of analysis the dynamic characteristic of the BLDCM, the electromagnetic excitation is investigated in the next subsection.

For the sake of convenient analysis, some assumptions are listed as follows: (1) the silicon steel sheets are infinitely permeable; (2) the end effect is ignored; (3) the relative permeability of permanent magnet subdomain .

In air-gap subdomain, the Laplace equation can be built in forms of polar coordinates, which can be described as:

where is the vector magnetic potential of air gap subdomain.

The boundary conditions of the air gap subdomain are:

where and are the vector magnetic potentials of the permanent magnet and slot-opening subdomains, respectively. Based on the variable separation method, Eq. (1) can be solved, whose general solution can be expressed by:

The relationship between the magnetic flux density and the vector magnetic potential can be described as:

Based on the Eq. (4), the radial and tangential magnetic flux density in the air gap can be obtained by:

where is a positive integer.

The electromagnetic torque can be expressed by:

where is the axial length of the stator core, and is the air gap permeability.

Substitution Eq. (5) into Eq. (7), the electromagnetic torque can be described by the Fourier series:

Based on the Maxwell tensor formula, the electromagnetic force along and directions can be written as:

3. Analysis of electromagnetic characteristic of the BLDCM

This paper takes the BLDCM in the rolling rotor compressor of an air conditioner as an example, where the corresponding system parameters are listed in Table 1. Then, the system parameters are substituted into the above equations to obtain the electromagnetic excitation. The effects of the air gap length and the slot opening on the electromagnetic characteristic are analyzed in detail.

Table 1. Parameters of the BLDCM

3.1. The effect of the slot opening on the magnetic flux density (MFD) 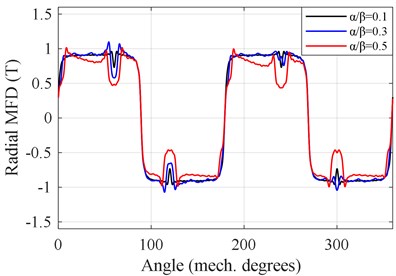 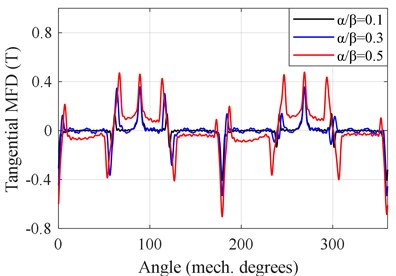 3.2. The effect of the air gap length on the electromagnetic force 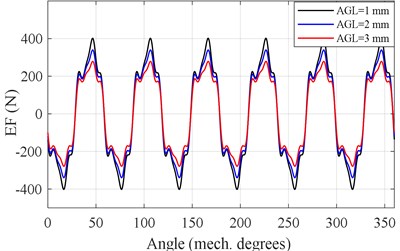 a) EF along direction 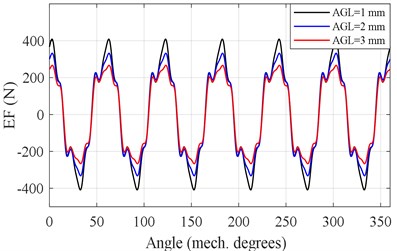 b) EF along direction