Application of A* algorithm in intelligent vehicle path planning

Copyright © 2022 Ruili Wang, et al. This is an open access article distributed under the Creative Commons Attribution License, which permits unrestricted use, distribution, and reproduction in any medium, provided the original work is properly cited. 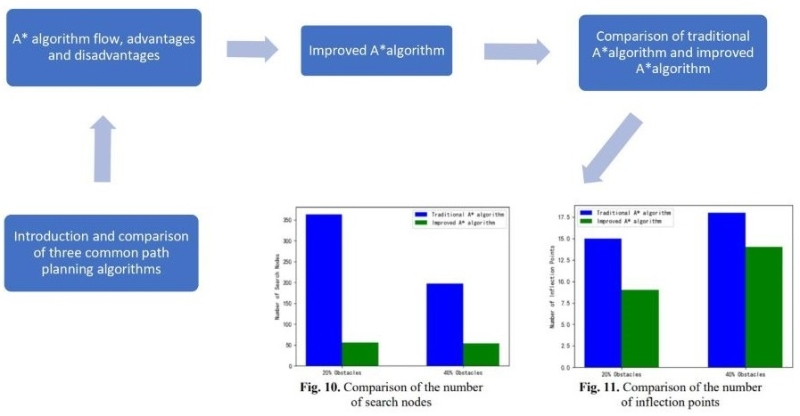 In recent years, with the rapid development of artificial intelligence technology and cloud computing, the field of Intelligent Vehicles research has also risen to a new level. Among them, path planning is one of the key technologies in the field of Intelligent Vehicles research, which refers to finding an optimal path from the start position to the target position in a real road environment for smart cars according to set performance indicators (such as optimal distance time, no collision, etc.) [1]. There are many kinds of path planning algorithms, and the more common ones used for path planning of smart cars are Dijkstra algorithm, BFS algorithm, A* algorithm [2]. In which, Dijkstra algorithm can find an optimal path, the shortcoming is that the search efficiency is too low. BFS algorithm compared with Dijkstra algorithm, the search efficiency is improved, but it is not sure whether an optimal path can be found. A* algorithm is a heuristic search algorithm, combining the advantages of the first two functions, the calculation is simple and fast, easy to operate, and is widely used in two-dimensional path planning design, but it still has some shortcomings [3]. Therefore, in this paper, we first introduce the general pathfinding algorithm, then analyze the A* algorithm and improve and optimize in the direction of deficiencies. The results of the optimization are verified by MATLAB simulation, and finally the paper is concluded. 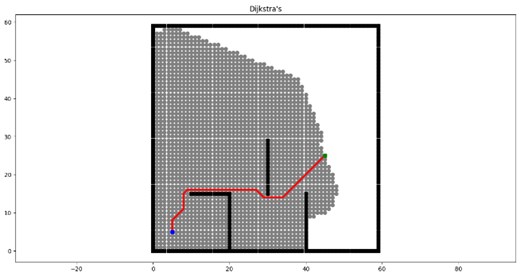 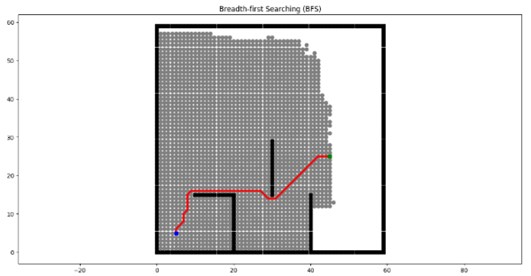 3.1. Principle of A* algorithm

The A* algorithm is a heuristic search algorithm that combines the respective features of Dijkstra's algorithm and BFS (Breath-First Search) algorithm. It has better accuracy and flexibility to ensure that the intelligent vehicle obtains the optimal path while maintaining the efficiency of path search as much as possible. The core part of the algorithm lies in the design of the estimation function [6], and the general form of the estimation function of the A* algorithm is Eq. (1):

If the value of is low, the algorithm can obtain the shortest path, but the search operation is slow. If the value of is high, the search speed of A* algorithm will become faster, but the obtained path is not the optimal path [7]. Manhattan distance, Euclidean distance, Chebyshev distance, etc. are often used as heuristic functions in practical calculations [8]. For any two points A and B in a two-dimensional right-angle coordinate system the coordinates of the two points are (, () then the three distance functions are.

(1) Manhattan distance is the sum of the absolute value of the difference between the and coordinates of two points A and B located in the coordinate system:

(2) Chebyshev distance is a metric in vector space, which is the maximum value obtained by comparing the difference between the horizontal and vertical coordinates between two points A and B, respectively, and then taking the absolute value, i.e.:

(3) Euclidean distance is the shortest linear distance between two points A and B located in the coordinate system, i.e.:

A detailed representation of the three distances is given in Fig. 3.

Compare by three distances, Manhattan distance is simple to calculate and efficient in path planning, but the quality of the planned path is poor; Euclidean distance is the shortest and easy to get the shortest path, but the calculation is complicated leading to low solution efficiency; diagonal distance as a heuristic function is relatively simple to calculate and the valuation error of path planning is small, so the diagonal distance heuristic function is used in this paper.

The A* algorithm is to evaluate each node by the estimation function to get the optimal node, and repeat the process until the target node is searched. The algorithm steps are as follows.

1) Initialize the program and generate the environment map boundary, starting and target points and obstacles.

2) Add the starting point S to the OPEN table.

3) Judge whether the OPEN table is empty, if it is empty, the algorithm is finished and the path cannot be found, otherwise go to the next step.

6) Over-cycle the algorithm until the target point E is in the CLOSE table, indicating that the optimal path has been found, or the OPEN table is empty, and the algorithm ends.

After running this algorithm, the target node will point to its leading node, with so on, until the leading of a node is the starting node, and the global optimal path can be obtained.

3.2. Deficiencies of the A* algorithm

The analysis above shows that although the A* algorithm is simple in principle and convenient to use, however, the algorithm needs to continuously update the OPEN array list and CLOSE array list during the search process to calculate the estimated value of each node, thereby finding the minimum node of the optimal path, thus also revealing that the A* algorithm has certain deficiencies.

(2) There are too many unnecessary inflection points in the planned path, which leads to poor smoothness and increased danger, which is not conducive to smart cars driving in the actual environment.

In this paper, we analyze the shortcomings of the above A* algorithm in the search process and propose to improve the traditional A* algorithm.

4.1. Optimization of the heuristic function 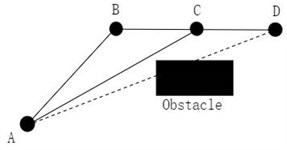 Node B is the node planned to circumvent the obstacle between nodes A and D.

Insert node C between nodes B and D.

The original planned path is optimized by Floyd's algorithm and updated from nodes A, B and D to the current nodes A, C and D. The turning angle of the path is significantly reduced, thus making the smoothness of the path planning significantly improved, which can ensure smoother operation of the intelligent vehicle.

5.1. Creation of the simulation verification environment

The map modeling of the motion environment in which the intelligent vehicle is located is generally performed before the path planning. Depending on the type of map, the grid method, topological map method and free space method are commonly used [11]. Grid method is commonly used by the A* algorithm for path planning [12]. The basic idea of the grid method is to partition the environment region into a grid of the same size, each grid corresponds to a sub-partition of the real environment, and the grid map can characterize the initial and target locations of the smart car, the boundaries and obstacle areas within the environment region. 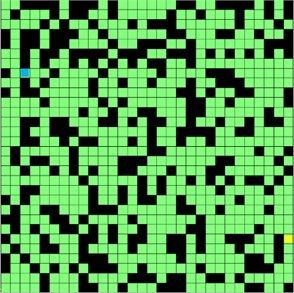 In order to verify the effectiveness of the improved A* algorithm, the simulation software platform MATLABR2021a is used to conduct simulation experiments and establish a raster environment map with a 20×20 grid, set the proportion of two obstacles in the grid environment map to 20 % and 40 % respectively, and randomly generate the starting and ending coordinates. The path planning is performed in the grid map using the traditional A* algorithm and the improved A* algorithm. 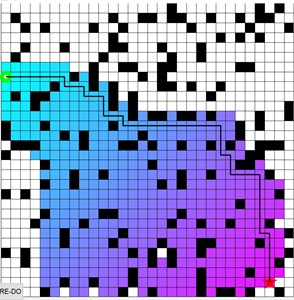 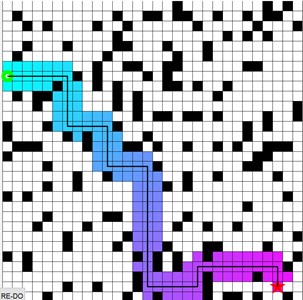 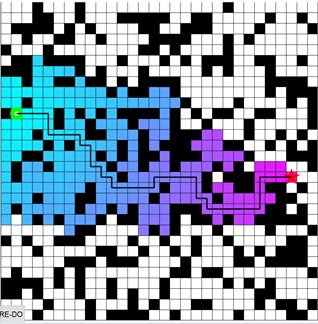 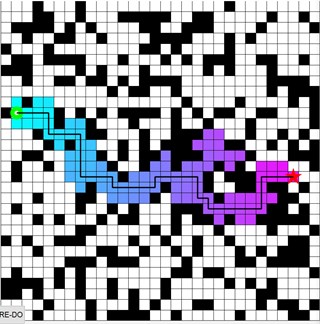 Fig. 10. Comparison of the number of search nodes 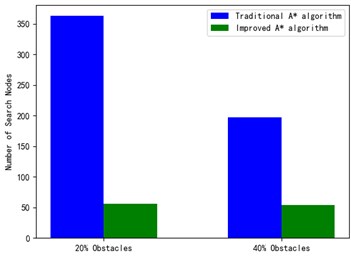 Fig. 11. Comparison of the number of inflection points 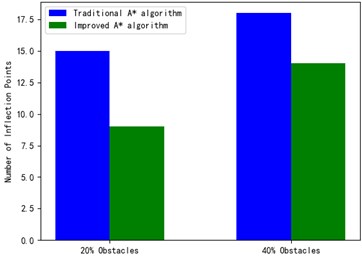 In order to more intuitively show the advantages of the improved A* algorithm in the entire path planning, the number of search nodes and the number of inflection points in the search path are reduced, and the results are shown in Fig. 10 and Fig. 11.