Copyright © 2018 Kun Qian, et al. This is an open access article distributed under the Creative Commons Attribution License, which permits unrestricted use, distribution, and reproduction in any medium, provided the original work is properly cited.

Electric vehicles (EV) are considerably quieter than internal combustion engine (ICE) powered vehicles, because noise of ICE is eliminated. However, the interior noise of an EV usually contains significant high-frequency noise components caused by electrical motor, which can be subjectively perceived as annoying and unpleasant. This paper describes a numerical model to predict interior acoustic noise caused by electromagnetic forces in permanent magnet synchronous motor (PMSM) for electric vehicles. Firstly, the principle of the multiphysics method is to establish a complete 3Dstructural finite element model (FEM) of motor. Based on FEM, natural frequency and modal shape were calculated by modal analysis. Secondly, using an electromagnetic finite element solver, the excitation due to electromagnetic phenomena is obtained. This excitation is then projected onto the structure mesh of motor in order to calculate the dynamic response. Thirdly, radiated electromagnetic vibration acceleration on the surface of the motor is calculated with modal superposition method. Compared with experimental test results, the creditability of motor electromagnetic vibration simulation is proved. Finally, by combining with transfer path analysis (TPA) techniques, interior electromagnetic noise of electric vehicles is accurately predicted. According to contribution analysis, motor surface zones and transfer paths contributing largely to the interior motor electromagnetic noise are identified. The results play a significant guiding role in both electric vehicle and permanent magnet synchronous motor for noise control and analysis.

Currently electric vehicles (EV) are attractive because they emit no pollutants. Although electric vehicles are almost always considerably quieter than those powered by internal combustion engines (ICE), the interior noise is characterized by high-frequency noise components which can be subjectively perceived as annoying and unpleasant [1]. Compared with ICE powered vehicles, the aerodynamic noise and road noise is rising in EV. The sound quality has been changed by new component of the motor noise [2].

Noise, Vibration and Harshness (NVH) problems related to electric motor design have nothing in common with those of gasoline or diesel engines: electric whistling is a high frequency harmonic phenomenon, easily detectable due to the low background noise of a non-thermal vehicle and mainly perceived as very unpleasant by the customer [3]. This paper takes part in this process: the goal is to predict the vibro-acoustic characteristics of a motor during the design phase.

The permanent magnet synchronous motor (PMSM) is suitable for components of EV systems. Owing to its high torque density and high efficiency, the PMSM has been used as promising candidate for many industrial applications [4].

There are many electromagnetic sources affect noise and vibration of the PMSM such as cogging torque, normal force, torque ripple, etc. Even if the excitation due to electromagnetic phenomena of electric motors is well known, the link to the dynamic excitation generating vibrations and noise is not done.

This paper focuses on the airborne noise radiated by the motor. This requires the estimation of the electromagnetic forces applied to the motor, to calculate the dynamic response of the motor and its radiation. Thus, the excitation that is the origin of motor can be deduced from this approach.

The finite element method (FEM) is used to implement this calculation methodology. Electromagnetic, mechanical and acoustic phenomena must be taken into account. This type of calculation has been presented and implemented by several authors. Jean et al. used this methodology to calculate the acoustic power radiated by the automotive motor [5, 6]. Shin et al. applied this methodology to the analysis of the vibration characteristics of a permanent magnet synchronous motor (PMSM) through investigation into its electromagnetic vibration sources [7]. Sunghyuk Park et al. predicted acoustic noise due to electromagnetic forces in interior permanent magnet synchronous motor (IPMSM) for electric vehicles [8]. Abdenour Abdelli, et al. also applied this methodology to model an interior permanent magnet motor for a hybrid electric vehicle [9]. The implementation of the general simulation method has already been detailed.

Different from the others, the key point of this paper is to predict interior motor electromagnetic noise of electric vehicle by transfer path analysis. Transfer path analysis (TPA) is fairly well established for estimating and ranking individual noise or vibration contributions at a point coupled interfaces between vibration source systems receiving passive vibroacoustic systems. Once the dynamic response of the motor has been validated, the interior motor electromagnetic noise is estimated through transfer path synthesis (TPS). This method played a significant guiding role in both electric vehicle and permanent magnet synchronous motor for sound quality design and analysis.

1) Axial modal of motor has a significant impact on motor vibration.

2) Structure of motor end cover not only enhance the quality of the motor, but also significantly increase the stiffness of the motor stator.

3) Installation method of motor has a significant impact on the modal parameters of motor structure [10]. 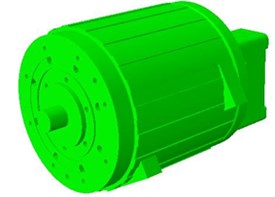 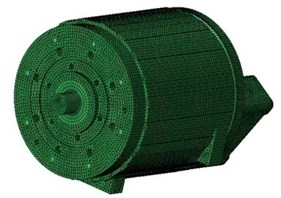 Front end cover of drive motor was connected to the reducer in the vehicle, while rear end cover was connected to the frame via the suspension system. Therefore, fixed constraints were applied on the motor front and rear end covers. Structural modal of motor was calculated by Block Lanczos method. To ensure the accuracy of calculation results, modal frequencies of structures were required to be at least twice the acoustic response frequency studied. Since the range of interior motor noise frequency was 0-6400 Hz in this study, the calculation range of motor modal was 0-12800 Hz.

(1) Maxwell electromagnetic force: this force acts on the surfaces of motor stators and rotors, which is the major source of electromagnetic vibration and noise of motors.

(2) Laplace force: this force acts on the motor stator coils, which can lead to vibration of the coils or possible short circuits in severe cases, thus damaging the motor stator laminations.

(3) Magnetostrictive force: after being magnetized, stator cores are susceptible to magnetostriction and thereby cause motor vibration. 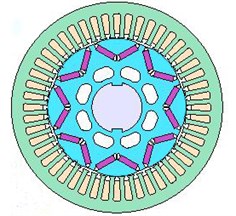 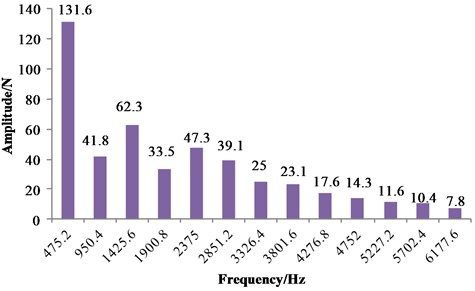 Vibration response of the motor structure was calculated by modal superposition [15]. The modal superposition method requires the determination of damping ratio corresponding to each vibration modal order. In case of a structural resonance, there will be considerable vibration, whose amplitude may reach infinity if structural damping is not considered. Damping ratio can be obtained through tests, but such tests were difficult and costly. In this paper, linear damping ratio was used as shown in Eq. (1): 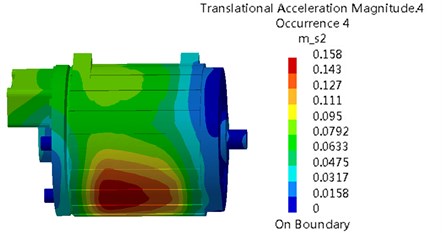 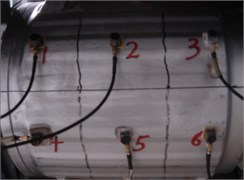 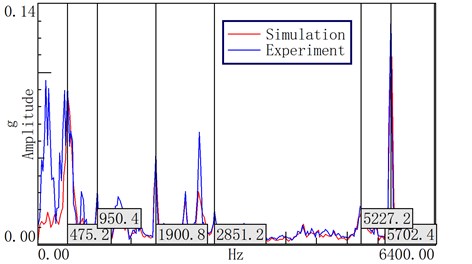 Supposed that electric car was linear time-invariant, then we can know from the linear superposition principle that the sound pressure at the interior target point was superposed by various noise sources transferred to the interior by air transfer via different paths, as shown in Eq. (2):

Noise source excitation and air transfer function were the two basic conditions for synthesis of interior electromagnetic noise of motors. Motor electromagnetic noise radiates into the air through the motor surface, and is then transferred to the interior through body panels, window glass and cavities. In this paper, motor surface was divided into 32 equal-area zones, where each zone was equivalent to a point noise source and had their own air transfer path. Thus, the noise at the interior target point can be expressed as:

In the following, air transfer function for these 32 transfer paths was measured and exciting force was calculated.

Based on Eq. (3), air transfer function can be expressed as:

Because of the tight space constraints, microphones may be hardly arranged in engineering application, and so the reciprocity method is usually adopted to carry out air transfer function measurement. If the system is linear is time-invariant and passive and transfer characteristics do not change while excitation location and response location can be interchangeable, this system is reciprocal. In other words, reciprocity for the same transfer path is that the transfer function is unchanged by the change of measuring direction. The reciprocity method is effective for acoustic system and mechatronics engineering. 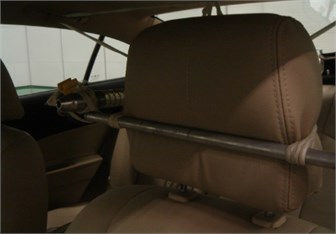 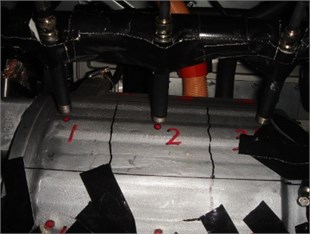 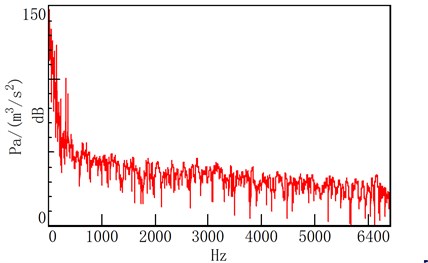 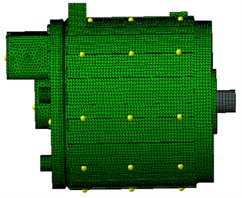 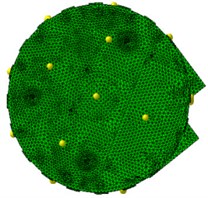 The estimated transfer function of each path obtained through experiment and the vibration acceleration of each noise source at motor surface obtained by simulation were introduced into the TPA module of LMS Test.Lab software to create hybrid test model for synthesis of each transfer path noise and calculation of interior motor electromagnetic noise. 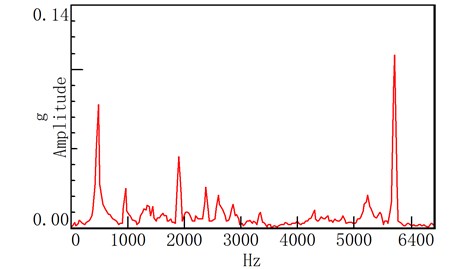 Fig. 14. The comparison between experimental and simulated noise 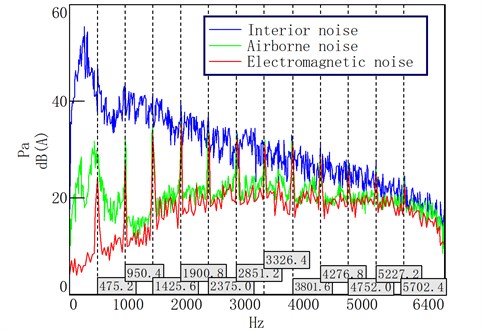 Fig. 15. Contribution of each transfer path to motor electromagnetic noise

Motor surface zones and transfer paths contributing largely to the interior motor electromagnetic noise are identified by contribution analysis. Measures, such as reduction of vibration by sticking damping material to the motor surface zones with severe vibration or reduction of air transfer function by filling sound-absorbing material at the vehicle cavities, can be taken to reduce the interior motor electromagnetic noise, which provides guidance for the attenuation of interior high-frequency noise. 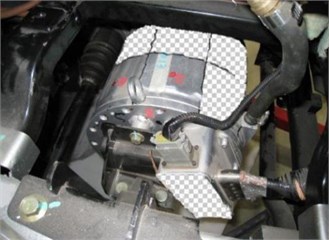 This work was supported by the Science and Technology Development Project of Jilin Province of China (Grant No. 20126007).