Copyright © 2018 Yun Dong, et al. This is an open access article distributed under the Creative Commons Attribution License, which permits unrestricted use, distribution, and reproduction in any medium, provided the original work is properly cited.

Structures tend to exhibit low frequency and damping owing to the extensive application of high-strength construction materials and slender designs. The lateral vibrational problems of flexible structures have attracted considerable attention [1] from several researchers since the infamous London Millennium Bridge accident [2]. Early studies focused on vibrational measurements [3, 4] and lateral excitation force [5]. Typical human excitation is modeled by harmonic force [6], which has been applied to the dynamic study of crowd-structure interaction [7]. However, this excitation force model does not consider the dynamic contributions from humans, such as body mass or damping. A few structural measurements [8-10] have shown that humans can change dynamic structural properties such as damping or natural frequency. In addition, biomechanical measurement [11] has shown that the human body possesses a relatively larger damping capacity and elastic stiffness. Hence, numerous biomechanically inspired models have been presented for studying human-structure interaction dynamics. For instance, the inverted pendulum model [12, 13] has been proposed to study pedestrian–structure interaction. However, it neglects the elastic and damping capacities of pedestrians, and the corresponding gaits are unstable [14]. Further investigations performed using equivalent reduced-DOF systems have shown that the dynamic properties of occupied structures are different from those of empty structures [15]. Qin et al. [16] introduced a bipedal model with spring-damping legs for studying human–structure interaction dynamics. Gao et al. [17-19] proposed an approximate relationship between crowd size and dynamic vertical structural properties based on the bipedal model. However, no quantitative investigation has been performed on crowd size and dynamic lateral structural properties, including the contribution of dynamic crowd properties.

In order to investigate the effect of crowd size on lateral structural properties, a simplified theory model is proposed. Based on previous research [20], this study quantitatively explores the variation mechanism of lateral structural properties under a locomotive crowd. The crowd is simulated by walking bipedal pedestrians; it includes the contributions of mass, damping, and the stiffness property. A dynamic equation is established based on Lagrangian theory. A further simplified formula is deduced based on the assumption of uniform distribution and synchronous walking of the crowd. The formula can be quantitatively used to estimate the effect of crowd size on structural properties. This work can explain the influence of a crowd on structural properties, and it can be used to evaluate the vibrational serviceability of structures for engineering design. 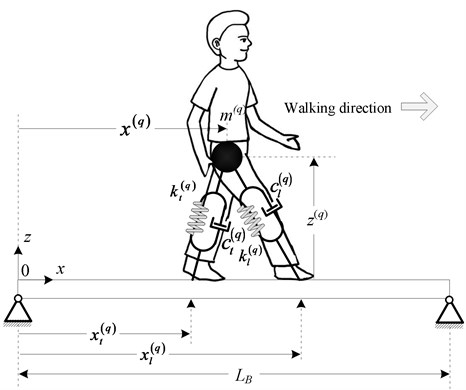 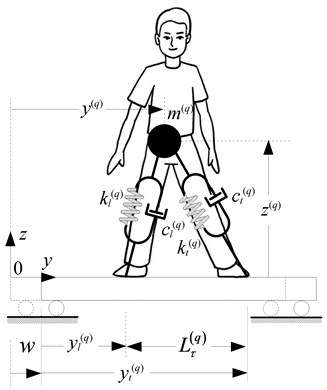 The pedestrian is assumed to walk with self-determined velocity [19] and remain in contact with the structural surface at all times. The structure is modeled by a simple supported beam with a uniform cross section (Fig. 1). The lateral dynamic equation of the pedestrian-structure system is derived based on the Lagrangian equation. The kinetic energy () and potential energy () of the system in the phase of both feet touching ground can be obtained as:

where denotes the velocity variables of CoM such as in lateral vibration. (, ) denotes the physical length of the leg with natural length . () denotes the stiffness variable of the spring leg. Subscripts and indicate the leading and trailing legs, respectively. is the number of pedestrians or crowd size. is the gravitational acceleration. The structure is defined to have lateral bending stiffness and longitudinal linear density and represent the lateral vibrational velocity and curvature of the beam, respectively.

The lateral displacement of the structure can be expressed as Eq. (3) by the separation of variables:

where is the vibration mode that satisfies boundary conditions; is a generalized modal coordinate, and is the mode number of the structure considered in the analysis.

Considering the damping forces from the beam and both legs, the crowd-structure system would perform virtual work, and the variation in the virtual work, is given by:

The Lagrange equations of the system are given by:

where symbol denotes the tensor sum of the stiffness or damping variables of the leading and trailing legs. and are the th damping ratio and circular frequency of the structure in the lateral direction, respectively. The variables in Eq. (6) are given by:

where leg damping parameter can be obtained as . means modal mass in th modal shape of structure. denotes the damping coefficient from leg induced by and . represents the stiffness of the leg .

Only the first modal of the structure is considered in this assumption. Step length is considerably less than , that is, . We can approximately define the equation . can be estimated using Eq. (8) considering the abovementioned approximation:

where and are the lateral projections of leading and trailing legs, respectively. The CoM of a pedestrian is assumed to vary as a cosine function in the lateral direction, according to the study of Liu and Urbann [21]. The variation is assumed to follow Eq. (9):

where is the structural circular frequency, is the stepping period, and is the starting time of a new step.

where is assumed to the lateral swing amplitude of CoM.

The formula can be approximately equated to Eq. (15) using Taylor expansion:

is defined as the compression of the leg, and it is approximately given by Eq. (17):

where is a sign function, and it is expressed is:

Applying a similar approximation, and can be rewritten as:

It is noted that structural damping under a crowd is related to frequency and crowd size. The damping under crowd excitation given by Eq. (25) shows that structural damping increases with damping ratio / and crowd size . However, the variation in structural damping is not linearly dependent on crowd size owing to the complicated relationship between crowd size and structural frequency (Eq. (26)). The frequency of the structure under crowd excitation (Eq. (26)) indicates that the variation in the structure is related to crowd size and walking frequency. A larger crowd size would result in smaller frequency. It is more important that this simplified theory can quantitatively describe the effect of a crowd on structural properties. The effect of a crowd on the dynamic structural characteristics under a certain crowd size can be precisely estimated. This theory can provide practical guidance for the servicing assessment and design of slender structures in future.

To verify the proposed model, a footbridge with a span length of 100 m (Carroll et al., [13]) is used to calculate the effect of the crowd on structural properties. The lateral dam-ping and fundamental frequency of the footbridge are 0.5 % and 0.85 Hz, respectively. The ratio of the masses of the crowd and structure is linearly changed from / 0.0 to 0.5. Different stepping frequencies are selected for simulation. The calculation duration is 1 min. Figs. 3(a) and (b) show the lateral displacement and acceleration responses under resonance excitation, respectively. Figs. 3(c) and (d) show the lateral displacement and acceleration responses under, respectively. Compared to excitation under, resonance excitation can trigger increasing responses.

Fig. 3. Effect of ratio of masses of crowd and structure on the structural responses

To investigate the effect of crowd excitation on structural properties, the peak responses and dynamic structural characteristics under different stepping frequencies are compared as shown in Fig. 4. Fig. 4(a) shows the peak accelerations under variable mass ratio /. Comparison to non-resonant frequency , the acceleration of the structure increases with mass ratio. A larger crowd size is more unfavorable under resonant excitation. However, the change in excitation has negligible effects on lateral structural properties. Structural frequency decreases as mass ratio increases (Fig. 4(b)).

Fig. 4. Effect of ratio of masses of crowd and structure on structural properties 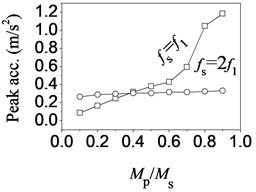 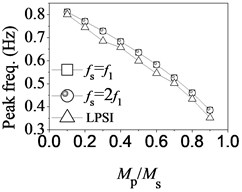 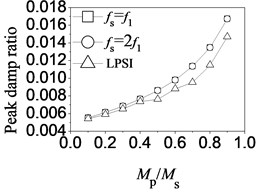 However, it does not change under different excitation frequencies. The structural damping ratio increases with mass ratio (Fig. 4(c)). However, it does not change under different excitation frequencies. Thus, it can be seen that the change in excitation affects only structural response and has no influence on dynamic structural properties. In addition, comparisons to the original non-simplified model [20] (LPSI) show that the peak frequency (Fig. 4(b)) and damping ratio (Fig. 4(c)) of the simplified model are closely with the non-simplified model (LPSI). The influence characteristics of the crowd on the structural lateral properties agree with measurement [22], that crowd can improve the lateral damping capacity, but deteriorate lateral frequency of structure.

To further explore the effect of larger crowd size under resonant excitation, the ratio between the masses of the crowd and structure is increased from zero to the maximum (1). The structural frequency under varying mass ratio is plotted in Fig. 5(a), and it decreases as mass ratio increases. A larger mass ratio results in lower frequency, which implies that a larger crowd size leads to increase in lateral structural unstable risk. On the contrary, a larger mass ratio results in a higher damping ratio (Fig. 5(b)). Thus, it can be seen that the crowd evidently affects lateral structural properties. A larger crowd size leads to lower frequency; however, this is favorable for damping capacity. The lateral acceleration of the midspan is shown in Fig. 5(c). The increase in mass ratio leads to increase in response under crowd resonant excitation. This implies that resonant excitation and increasing crowd size result in the amplification of structure responses. 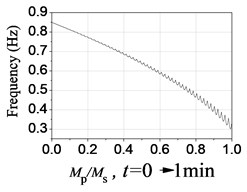 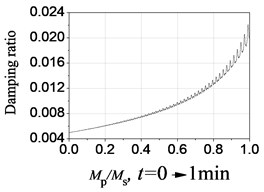 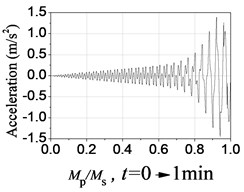 The authors declare that there is no conflict of interest regarding the publication of this paper.