Copyright © 2018 Chong Ji, et al. This is an open access article distributed under the Creative Commons Attribution License, which permits unrestricted use, distribution, and reproduction in any medium, provided the original work is properly cited.

The explosive charge structure can be classified into concentrated charge and dispersive charge. Although the experts agreed that the two charge structures have different effects on the vibration effect of blasting earthquake through the long-term experiment, its internal mechanism, especially the transmission of vibration and energy in dispersive charge, hasn’t come to a clear conclusion. But the exploration of differential blasting keeps going in the Academia all the time. Wu Congshi et al. [1] analyzed the connection between millisecond blasting and the blasting vibration, concluding the appropriate interval of millisecond blasting in their own research project. Lin Dachao and Zhang Qi et al. [2] designed experiment to research millisecond blasting and blasting vibration. Namely, under 20 ms, 40 ms, 60 ms and 80 ms delay time and distance from the explosion point 10 m, 20 m and 40 m, the theoretical analysis and research on the vibration velocity and the rule of the power spectrum arrangement were studied by testing the vibration velocity on the direction vertical to the ground. According to the study, reducing ground vibration strength through millisecond blasting, there is an optimal value of delay time. Anderson [3] summarized the relationship between the delay time and the vibration mainly based on an immense amount of engineering blasting data, and expressed their relationships by gray scale. Gao Wenxue and Jin Qiankun [4] studied slot millisecond blasting of deep hole by the engineering practice and based on the study of the dynamic finite element program, and discussed the slot rock movement law and the inherent mechanism of millisecond blasting. It showed that, based on engineering practice, the dynamic situation of rock blasting fragmentation is really presented, which has become the support of blasting theory. Hewetra [5] studied underground structure stability under blasting vibration wave, analyzed influence of surrounding rocks with different properties on vibration velocity, and put forward effective vibration damping measures. Anony [6] used the finite element program to analyze the damage model of modified fragmentation effect on surrounding rock under the condition of different detonating modes, which is according to the dynamics theory. Li Xi-bing and Ling Tong-hua [7] utilized the piecewise linear interpolation method instead of analytical expression of trigonometric interpolation, which means less complication and higher accuracy in the calculation of single-segment and multi-segment millisecond blasting signal response spectrum. The results showed that single-segment and multi-segment has quite discrepant structure response to blasting vibration. In addition, the blasting seismic wave differences exist in the choice of amplification effects for the distinction of the structure, for instance, such millisecond blasting in the influence of the damping effect at the same time, increase the probability of structural response to selective amplification some of the vibrating body.

The initial conditions of the numerical simulation model are determined according to the principle of maximum blasting damage effect. Considering the damage of buried pipe subjected to millisecond blasting for a certain distance from the blasting area, the calculation model is mainly produced by the homogeneous explosive charge. The distance between the charge and the axis of the pipeline is 50 m, and the pipe buried 1.2 m underground.

According to the characteristics of the problem studied, the coupling algorithm of multi material Euler and Lagrange structure can be applied to calculate the interaction between explosives, air and other solid structures. In the actual modeling process, it defines explosives and air as Euler grids, and ensures the common nodes among them. It defines the site medium, the fine sand in the pipe trench, the backfill soil medium and the steel pipe as the Lagrange mesh. The interaction between the fine sand in the trench and pipe adopts the surface-surface contact analysis. On contact surface in fine sand and steel pipe, steel pipe will take the master contact surface (Master Surface, for larger stiffness), and soil can be considered as the slave contact surface (Slave Surface, relatively soft). In order to improve the mesh accuracy and save computing resources, we only need to establish the 1/2 model relative to the hole axis and adopt the g-cm-s system. The meshes of explosives and surrounding rock are denser than others. Because the rock is affected by blasting seismic waves, which is in the range of elastic deformation, so the mesh could be sparse. The SOLID164 element is used to mesh the above three-dimensional numerical models. The numerical calculation model is shown in Fig. 1.

Fig. 5. The vertical velocity history curve of the pipe under the condition of no vibration-isolating slot

The vibration peak value in each time history curve is shown in Fig. 5. The relationship between the single explosive charge and the maximum vertical vibration velocity of the pipe has been shown in Fig. 6. The graph shows that the maximum vertical vibration speed of pipeline has a positive correlation rather than linear correlation with the amount of homogeneous explosive charge. This is in accordance with the trend reflected by the prediction formula of blasting seismic peak value which is proposed by the national standard “GB6722-2014”.

Fig. 6. The relationship between the single explosive charge and the maximum vertical vibration velocity of the pipe 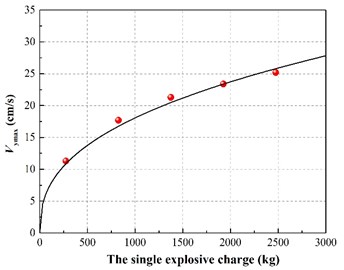 Fig. 9. The clipping effect of vibration-isolating slot on the blasting seismic wave

a) 275 kg charge per delayed interval

b) 2475 kg charge per delayed interval 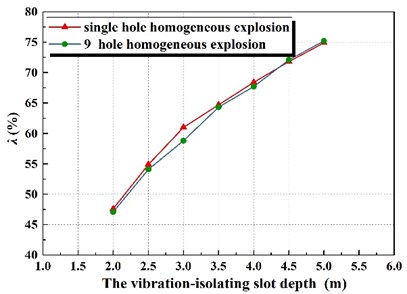 It can be seen from the above diagram that the amount of homogeneous explosive charge (homogeneous detonating holes) in several working conditions is different, but the vibration-isolating ratio is quite close if vibration-isolating slot structure parameter, the depth , is same, which should be the essence of physical mechanics phenomenon. Considering the practicability in engineering applications and the convenience to formulate norms for relevant departments, fit the data and the fitting formula expresses as the followed:

1) Nonlinear dynamic finite element analysis model can well simulate dynamic response of the geotechnical field subjected to millisecond blasting. Simple and practical, the numerical method can be selected and adjusted according to different research objectives and content, which will provide technical support for the research on the influence of millisecond blasting on the vibration-isolating effect of vibration-isolating slot.