Copyright © 2019 Baochun Xu, et al. This is an open access article distributed under the Creative Commons Attribution License, which permits unrestricted use, distribution, and reproduction in any medium, provided the original work is properly cited.

Since its introduction, Hilbert-Huang Transform [1] (HHT) has been widely used in many fields. The signal processing method is based on the hypothesis that a signal consists of a finite number of Intrinsic Mode Functions (IMFs). Up to now, researchers have not found any rigorous mathematical formula for decomposing signals into a finite number of IMFs. Instead, they have relied on a specific algorithm called Empirical Mode Decomposition (EMD). Although EMD is regarded by HHT researchers as a reliable method of obtaining the IMFs of a signal, it is plagued by some problems that require urgent solution [2-4]. One of the problems being intensively studied is the mode mixing that occurs during the process of EMD decomposition. Mode mixing refers to the situation when an IMF resulting from EMD decomposition has components of different frequencies. A lot of effort has been made on solving the mode mixing problem. Such as Huang, Senroy, Deering and so on [5-9]. They proposed their own solutions about the mode mixing based on their academic background. But they failed in identifying the real causes of mode mixing. As a result, the application scopes of the solutions proposed in these papers cannot be determined, which hinders wider application of these solutions.

Therefore, it is necessary to analyze and discuss the causes of mode mixing. Considering that EMD relies on the signal extrema to decompose signals, we start the investigation from the influence of the signal extrema on the EMD decomposition result, as well as from the relationship between the signal amplitude, the frequency variation, and the number of extrema. Then, we apply the findings in this study to analyze three widely-used solutions to the mode mixing problem and explore their strengths and drawbacks. The results of this study contribute to further EMD research.

A signal was constructed for investigating the relationship between its extrema and the EMD decomposition result. Two harmonic signals, and ( is the high frequency signal). The impact of the signal extrema on the EMD decomposition result was studied by varying the amplitude and frequency of . Two parameters are defined here, one is the ratio of the number of extrema of the low frequency signal to that of the composite signal , and the other is the index which measures the result of decomposing the composite signal, which is defined as [10]:

where , is the first order IMF obtained by decomposing using EMD decomposition. Obviously, corresponds to the high frequency signal . It should be exactly or roughly as the same as when the decomposition produces a good result, and therefore 0. If mode mixing occurs during the process of decomposition, then c1 will contain some components of or it will be roughly the same as . Therefore, 0 1. Without a loss of generality, signal , 1.5 Hz, 1. The lengths of signals were in the range of 0-20 seconds and the step was 0.001 seconds.

Fig. 1. and index change with parameters 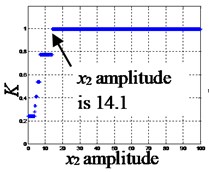 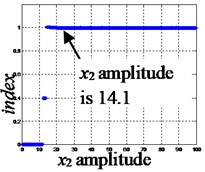 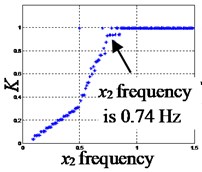 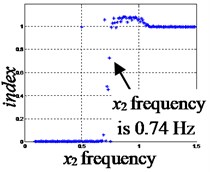 Harmonic signals have explicit mathematical expression and conform to the definition of IMF, whereas non-stationary signals are complex, and their expressions are diverse. Therefore, we used harmonic signals to illustrate the characteristics of different types of mode mixing. In the previous section, two experiments be used for analyzing the causes of mode mixing, they are far from sufficient for the classification of mode mixing. Here, the effectiveness of EMD decomposition was illustrated by a decomposition plane, and the classification of mode mixing were studied by observing the effects of amplitude and frequency variations of the low frequency signal. Refer to the references [10-13] for a description of the decomposition plane. Without a loss of generality, signal , 1 Hz, 1, signal , 0 1, 0 10. Composite signals of different constituent frequencies and amplitudes could be constructed by varying , . The signal decomposition outcome diagram, index value, could be plotted according to the decomposition outcome corresponding to each pair of (, ), see Fig. 2, is the -axis, is the -axis (using their common logarithm values). According to the index value, the diagram can be roughly divided into 4 zones: Zone I: 1, 0.8 Hz the composite signal was almost impossible to decompose, Zone II: 1, 0.8 Hz the signal could not be decomposed too , it can be seen from the trend of the curve that the area of impossible to decompose always exists as the amplitude increases, Zone III: 1, 0.8 Hz, the signal could not be decomposed; Zone IV: 1, 0.8 Hz , the signal could be decomposed.

Zone I in Fig. 2 indicates that when the frequencies of the two signals were close enough (the ratio of low frequency to high frequency was greater than 0.8), the composite signal could not be decomposed, and this situation is not related to the magnitude of the signal amplitude. Zone II indicates that when the amplitude of the low frequency signal was greater than that of the high frequency signal, only a certain portion of the zone satisfied the conditions for successful signal decomposition, and the frequency of the signal could hardly make any difference under this condition. As both the phenomena of the frequencies getting too close and the amplitude of the low frequency signal being too large were present in Zone III, these two situations make the signal impossible to decompose. The experimental result in Fig. 2 shows that improper values of amplitude and frequency of the signal could cause mode mixing in EMD decomposition. Based on the above analysis and the current status of the EMD technique, this paper proposes to divide various forms of mode mixing into two basic types according to the causes, one type is caused by the frequencies of the signals getting too close, and the other type is caused by the excessively large amplitude of the low frequency signal. Different types of mode mixing require different solutions. Up to now, the distinction between different types of mode mixing and its consequences have not received much attention in the literature.

By making use of the findings discussed earlier in this paper. This chapter explore the mechanisms of three mode mixing solutions.

The derivation method was first seen in [5]. Their paper mentions that some of the signals that cannot be decomposed by standard EMD method become decomposable after undergoing a derivation. However, the paper does not explain the mechanism of this method.

However, there are two types of mode mixing, as described earlier in this paper. Aside from the type caused by amplitude imbalance, there is another type caused by the proximity of the frequencies of the constituent signals (corresponding to the Zones I and III in Fig. 2). The derivation method only changes the amplitude ratio between the two signals. It does not change the frequency ratio. So, the derivation method cannot deal with the mode mixing caused Zone III and Zone I. They were caused by frequency proximity.

Fig. 3. The sum of difference harmonic wave and its third derivative

a) The synthetic signals of high and low frequency signals

Fig. 4. The synthetic signal with the high amplitude value, and the waveform after frequency shift

b) The waveform after frequency shift by 18 Hz

a) The synthetic signal after adding masking signal

b) The pseudo IMF obtained by EMD decomposition signal

c) The waveform of pseudo IMF after removing masking signal

This work is supported by the Scientific Research Foundation of Nanjing Institute of Technology, the Introduction of Talent Project (Grant No. YKJ201441, YKJ201531, CKJB201505 and CKJB201808).