Copyright © 2018 Maohua Xiao, et al. This is an open access article distributed under the Creative Commons Attribution License, which permits unrestricted use, distribution, and reproduction in any medium, provided the original work is properly cited.

As an important part of rotating machinery, bearings play an important role in large-scale mechanical equipment. Abnormal bearing conditions may cause the machine to malfunction, or even evolve into a serious accident. Therefore, the accurate and timely fault diagnosis of the bearing is of great significance. Based on EMD, this paper introduces the working principles and characteristics of EEMD and CEEMDAN, respectively. Then the signal was decomposed by EEMD and CEEMDAN respectively. The simulation results show that CEEMDAN has better effect on signal decomposition. Then, comparing the effect of CEEMDAN and EEMD on bearing fault feature frequency extraction, the experiment proves that CEEMDAN has a better ability to preserve original signal and eliminate noise than EEMD method, and can extract bearing fault feature more accurately and timely.

As an important part of rotating machinery, bearings play an important role in large-scale mechanical equipment. However, due to the harsh working environment of the bearing, including corrosion, poor lubrication and plastic deformation, the bearing becomes one of the most easily broken parts of the machine. In order to diagnose bearing failures in a timely manner and prevent unpredictable accidents, it is particularly important to study bearing fault feature extraction techniques. In engineering applications, the fault characteristic frequency of the bearing is often extracted from the collected vibration signal. Therefore, vibration signal processing technology is widely used in the industrial field as the main analysis technology for bearing fault diagnosis.

EMD is a new time-frequency analysis method proposed by Huang, which can decompose the signal into several intrinsic modal functions (IMFs) [1, 2]. The method can perform adaptive selection of base at the same time when multi-resolution decomposition is completed. This method solves the problem of base selection and is suitable for handling nonlinear and non-stationary signals. However, mode mixing may occur when decomposing the intrinsic mode component (IMC) [3, 4]. In order to reduce the mode mixing, Wu Z. et al. proposed the Ensemble Empirical Mode Decomposition (EEMD), which reduces the effect of mode mixing by adding auxiliary white noise and achieves good results to a certain extent [5, 6]. Zheng J. et al. proposed a partly ensemble EMD (PEEMD) method to solve the problem of mode mixing, which is an improvement on EEMD [7]. However, EEDM also has the problems of low decomposition efficiency, too many pseudo-components, and ineffective extraction of fault features.

In order to solve these problems of the EEMD, Torres M. E. et al. proposed the complete ensemble empirical mode decomposition with adaptive noise (CEEMDAN) method with adaptive noise [8]. This method adds adaptive white noise in each decomposition stage to reduce the mode mixing. Colominas M. A. et al. used the IMF of Gaussian white noise decomposed by EMD as the unique noise to be added at each decomposition stage to solve the “false” IMFs that may be generated after CEEMDAN decomposes the signal [9]. Lei Y. et al. also applied this method to the fault diagnosis of locomotive rolling bearings [10]. But the diagnostic efficiency of this method was greatly reduced. This paper describes the use of CEEMDAN in bearing feature extraction and uses experiments to compare the accuracy of the proposed method with EEMD, and verifies the feasibility of the proposed method [11, 12].

2. Basic principles of EEMD and CEEMDAN

EMD is based on the time scale characteristics of complex signal itself without any requirement to setup any basis functions [13]. This method decomposes noise signals into a series of data sequence retaining local feature information, which is called Intrinsic Mode Function (IMF). Based on this characteristic, EMD has a high signal-to-noise ratio while dealing with non-stationary and nonlinear data. EMD method needs to meet the following 3 conditions:

(1) At least one maxima and one minimum must be contained in the signal.

(2) Time characteristic scale is defined by the time interval between adjacent extreme points.

(3) If there is no extreme point in the whole signal, but a turning point is available. Then differential can be done to the signal to obtain the extreme points. Finally, obtain the final decomposition results through the integration of IMFs.

The EEMD method is improved on the basis of the EMD method. The mode mixing phenomenon will frequently appear while using EMD method. The reasons are as the following due to two kinds of circumstances:

(2) The same scale appears in different IMFs. The EEMD method used the statistic characteristic that white Gaussian noise has a uniform frequency distribution. After additional Gauss white noise background is added in the signal, signal region at different scales will be automatically mapped to the appropriate scale of background white noise. This makes it possible to have a unified framework for the analysis of time scales which can separate various time scales clearly, enhance the anti-mixing effect and form an effective, adaptive, and dynamic two filter group, solving the mode mixing problem of EMD method.

The specific process of EEMD method:

(1) Add Gauss white noise with zero mean and variance as constant on the original signal and get a new target signal :

(2) Imply EMD decomposition on the signal . Obtained A series of IMF components and residual components of the target signal:

(3) Add sub different white noise to the target signal, and repeat the steps above:

(4) Do overall average operation of the above results to eliminate the influence of the many times adding of Gauss white noise on real IMF. Get the IMF component:

EEMD has great significance in solving the problem of mode mixing in EMD. But it has several drawbacks. First, a large amount of computation is needed. Second, many false components will be decomposed and achieved if the parameter chosen is not reasonable. Torres M E and others put forward CEEMDAN method to solve this problem. This method adds adaptive white noise in every decomposing stage and calculates the only left residual signal to achieve every model component [14]. In this way, the problem of EEMD was solved.

The specific process of CEEMDAN method:

(3) Discompose these signals ( 1, 2, …, , till the first EMD mode component is decomposed. Then defined the second modal component as:

(5) Discompose these signals ( 1, 2, …, ), till the first EMD mode component is decomposed. Then defined the 1 modal components as:

(6) Add 1 to , continue to carry out step 4 till the residual signal achieved can’t be decomposed any more (every residual signal contains on more than one extreme point). Finally, intrinsic mode functions are obtained. Residual signals meet:

Harmonics are resonant waves with the same frequency or multiple frequencies as the main wave! They are parasitized with the main wave! It is commonly known as harmonics and higher harmonics! In order to verify CEEMDAN’s better denoising effect, this paper strictly set the same harmonic signals: 50 Hz, 150 Hz, and 300 Hz for simulation experiments. To better compare the decomposition performance of CEEMDAN and EEMD on the signal, set the same input parameters for the two methods, that is, the white noise amplitude is 0.1, the ensemble size is 100, and the sampling frequency is 2000 Hz, to ensure that the simulation verification is more accurate. The sampling time is 2 s and is the gause white noise signal, as shown in Eq. (11):

Fig. 1. The correlation coefficient between the first 8 modes decomposed by EEMD and original signal

Fig. 2. The correlation coefficient between the first 8 modes decomposed by CEEMDAN and original signal 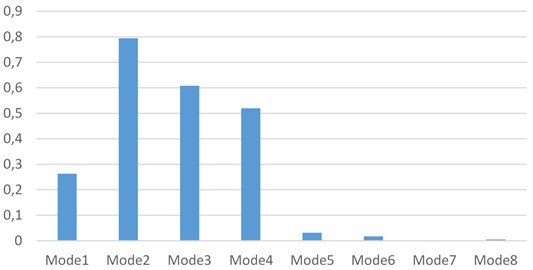 Fig. 2 shows the correlation coefficients between the first 8 modes of the CEEMDAN decomposition and the original signal. In the same way, the first four modal components are extracted and reconstructed to eliminate residual modal components in the signal.

Table 1 shows the correlation coefficient between the original signal and the reconstructed signal processed by the two methods.

From Table 1, it can be concluded that the proposed method can effectively remove the interference factors in the signal and the resulting reconstructed signal can better reflect the original signal.

To verify the effectiveness of this method, this paper chooses the rolling bearing as the research object then process the vibration signal of the bearing outer ring and the inner ring fault respectively.

The platform’s parameters are set as follows:

Bearing type is 6205-2RS JEM SKF, bearing speed is 1797 r/min, the sampling frequency is 12 kHz, the number of data points is 4096, and fault diameter set is 0.021 inches. Measuring points are arranged in the drive motor output of the platform.

The following Table 2 shows the fault frequency of the bearing outer ring and the inner ring calculated by the Eq. (14) and the Eq. (15).

In Fig. 3, the time domain waveform and spectrum of the fault signal of the inner ring are presented, when the bearing’s rotational speed is at 1797 rpm. And from Fig. 3, it is appreciated that the spectrum cannot identify directly the fault frequency mixed with a variety of noise signals.

Fig. 3. The time domain waveform and spectrum of the fault signal of the inner ring at 1797 rpm 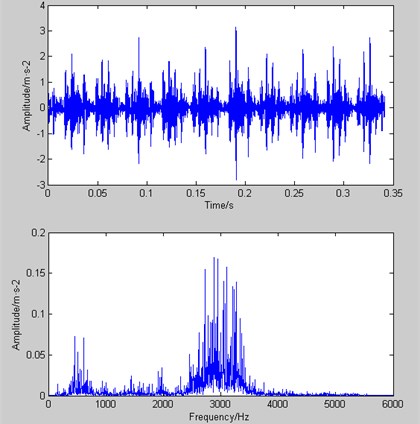 In the case of decomposing the inner ring’s fault signal through EEMD and CEEMDAN separately, the total modal number of CEEMDAN, both are 12, doesn’t have any increase compared with EEMD. Usually, the several modes in front, produced by extraction, are chosen as research objects because their correlation coefficients with original signals are high. Therefore, the paper takes the first 4 modes of EEMD and CEEMDAN respectively as the research objects. Which are shown in Fig. 4 and Fig. 5. 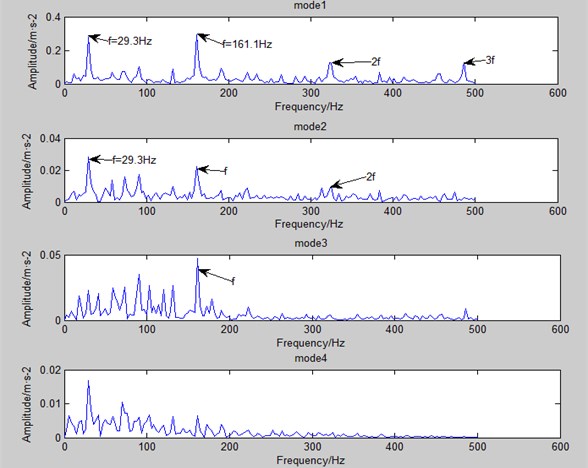 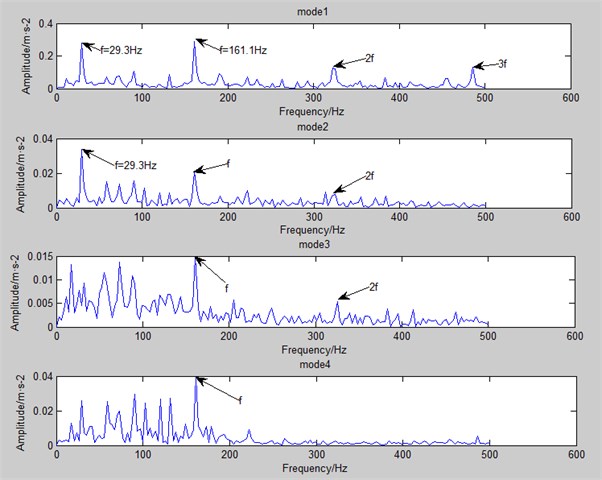 In addition, the paper uses the decomposed spectrum to analyse the case of outer ring. In Fig. 6, the time domain waveform and spectrum of the fault signal of the outer ring are presented, when the bearing's rotational speed is at 1797 rpm. As it can be seen, the fault frequency mixed with a variety of noise signals cannot be identified directly.

Fig. 6. The time domain waveform and spectrum of the fault signal of the outer ring at 1797 rpm

As is shown in Fig. 7 and Fig. 8, EEMD and CEEMDAN is applied to decompose the outer ring fault signal separately. EEMD produces 12 modes, and CEEMDAN produces 13 modes. The total modal number of CEEMDAN is only 8 % more than EEMD and there isn’t any obvious increase. Just like the case in inner ring’s spectrum. The several modes in front have higher correlation coefficient with original signals. Therefore, the paper takes the first 3 modes of CEEMDAN and EEMD respectively as the research objects.

In spectrum above, the frequency around 29.5 Hz is bearing rotational frequency, and that around 108 Hz is of outer ring fault. What’s more, it can be seen 2 frequency, 3 frequency etc. It is easy to find that CEEMDAN can find out more fault frequency and multiple frequency (especially in mode 3).

In conclusion, CEEMDAN is more effective than EEMD in extracting the characteristic frequencies of the fault signals inside and outside the bearing. Multiple modal components processed by CEEMDAN can identify the failure frequency of the signal. However, signals processed by EEMD are prone to mode mixing. 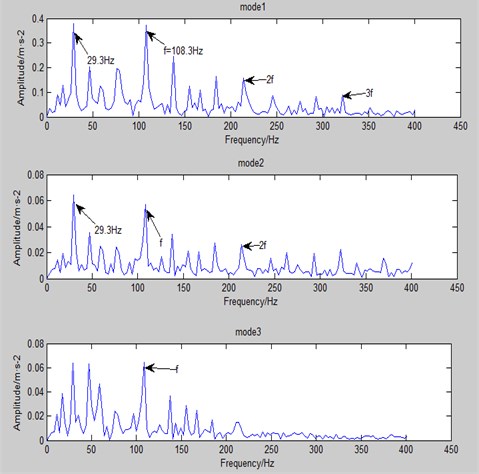 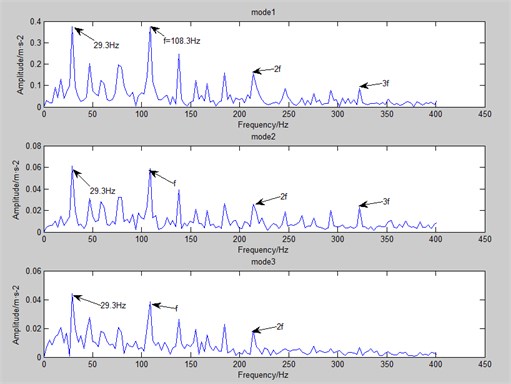 The research is funded partially by the National Key Research and Development Program of China (2016YFD0701103) and the China Postdoctoral Science Foundation (2016M601800).