Copyright © 2019 Ying Pan, et al. This is an open access article distributed under the Creative Commons Attribution License, which permits unrestricted use, distribution, and reproduction in any medium, provided the original work is properly cited.

A circuit breaker not only is a basic low voltage device but also is an important kind of switch used in power system. Shown in Fig. 1(a), a circuit breaker is installed on the wall of an electrical box. From Fig. 1(b), the breaker is consisted of two contacts. One is the moving contact; the other is the fixed contact. If the two contacts are closed, then the electricity is turn on. When the two contacts are kept away, the electricity is turn off. Because of that, the breaker can turn on, bear and break the normal or overloaded current in a circuit within limited time. Therefore, it is widely used in the industrial installations, for example, rail systems, electric vehicles and ship fields. However, once there is a fault phenomenon for the circuit breaker system, the system doesn’t work properly. To improve instantaneous protection reliability, an instantaneous failure mechanism of low voltage circuit breakers was analyzed [1]. Especially in a complex environment (a vibration caused by the external disturbance), the breaker has a higher chance of being in a failure state. A vibrational analysis was carried out by analyzing the signal in the time-frequency domain under no-load switching operations with a commercially available high-voltage puffer-type circuit breaker without opening its major parts [2]. So, describing the fault phenomenon of a circuit breaker in the vibration environment is very necessary for improving security in industrial electrical equipment.

For the failure property of the circuit breaker, there were several methods proposed by many researchers. The most common method was empirical mode decomposition (EMD). For example, based on EMD method and support vector machine (SVM), a new method for the fault diagnosis of high voltage circuit breaker (CB) was proposed [3], an extraction method based on ensemble empirical mode decomposition (EEMD) was presented and was verified effectively by the practical examples for identifying the fault patterns of HV circuit breaker [4] and a new method based on improved empirical mode decomposition (EMD) energy entropy and multi-class support vector machine (MSVM) was proposed to diagnose fault for high voltage CB [5]. But this identification method couldn’t represent the mechanism of the fault phenomenon for the circuit breaker, because this fault property is often a kind of nonlinearity characteristic. Therefore, some innovative ways were presented in present years, an Expert System (ES) with the addition of a signal processor module and factual database module to the conventional ES has been proposed for the diagnosis of CBs and OLTCs [6]. A Least Squares Support Vector Machines (LS-SVM) based CB maintenance scheduling optimization approach that considers constraint of cost effect was proposed [7]. Furthermore, the application of vibration analysis was dealt successfully with for circuit-breaker (CB) diagnostic testing with the aim of detecting mechanical anomalies in CB drive mechanisms and other moving parts in the interrupting chamber [8]. However, regardless of which method was taken, a detailed force analysis must be implemented before studying the fault phenomenon for a circuit breaker.

In the paper, a circuit breaker in a vibration environment is simplified as a cart-inverted pendulum system, a dynamical model is proposed by the Newton’s Second Law. And some simulations and experiments are carried out to verify the nonlinear model. Obviously, the model is demonstrated to be feasible. The rest of this paper is organized as follows: a dynamical model for a circuit breaker with an external vibration disturbance is obtained by describing its failure phenomenon in Section 2. Some simulation and experiment results are shown and some discussions are presented in Section 3. Finally, some conclusions are given in Section 4. 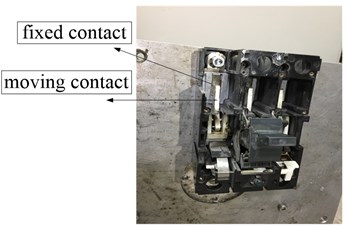 2. Description for the fault phenomenon of the breaker system

The cart-inverted pendulum system is decomposed into a cart and an inverted pendulum, and their forces analysis is shown in the Fig. 3. For the cart in Fig. 3(a), according to Newton’s Second Law, the mechanical formulas along the and directions of the cart are expressed as:

where is the displacement of the cart along the horizontal direction, is the mass, and are the forces applied by the inverted pendulum’s A end and B end respectively, and and are the support forces by the ground. and are the damping coefficient and spring constant respectively. And is the friction.

Fig. 2. Experimental setup and diagram of the breaker system 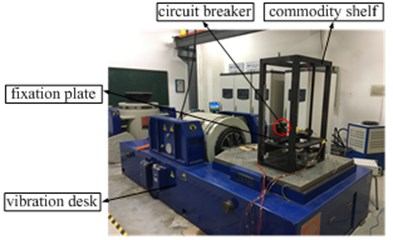 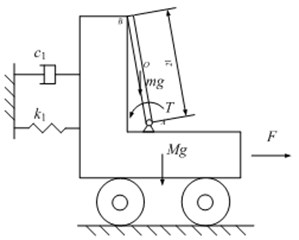 Fig. 3. Forces analysis of the system 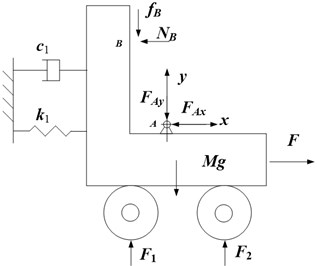 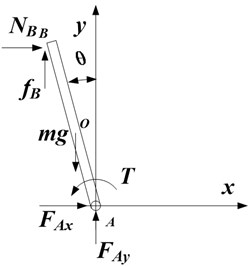 Fig. 3(b) shows the forces analysis of the inverted pendulum, and the mechanical formulas are given as:

where represents that the B end of the inverted pendulum does or doesn’t get off the cart. If  0, the moving contact has been kept away from the fixed contact for the circuit breaker. When 1, the two contacts are closed, the breaker can work normally in the circuit system. The is expressed as:

For above description, a dynamical model is constructed for representing the fault property of a circuit breaker in power system under a vibration environment with forces analysis. In next Section, some simulations and experiments are performed to verify effectively the theoretical model, and some results will be discussed.

Table 1. Corresponding parameters of the model in simulations

Fig. 4. Displacement of the cart

Fig. 5. Displacement of the point B in the inverted pendulum

Fig. 7. Circuit diagram of the breaker 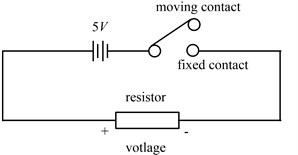 Then the circuit breaker is put in the vibration environment and its contacts are open, shown in Fig. 7. The circuit is viewed as a switch with a moving contact and a fixed contact. When the contacts are closed, the voltage is about 5V. Moreover, when the contacts are far away, the voltage of the resistor is about 0V. If the angle > –5°, the breaker is open and is equal to 0; if the angle ≤ –5°, the breaker is closed and is equal to 1. Furthermore, the voltage of resistor is measured by NI collector. The simulation and experiment results are revealed in Fig. 8. It shows the voltage of the resistor in Fig. 7. When the sinusoidal vibration acceleration is applied on the vibration platform (simplified as a cart in Section 2), the blue line is gained from the model by MATLAB/Simulink and the red dotted data is collected from the experiment. From fitting ration of the blue and red data, the theoretical model can describe effectively the experiment phenomenon.

Fig. 8. Voltage of the resistor 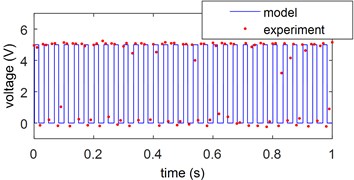 When an acceleration signal is set at a constant frequency and is applied on the cart, the limit amplitude of the acceleration is obtained to keep the moving contact away from the fixed contact of the circuit breaker by some simulations and experiments. The limit acceleration amplitudes in different frequency are given in Fig. 9. The minimum amplitude value of the acceleration to open the breaker under a vibration environment was attained with a different frequency and the minimum amplitude has a peak value at about 85 Hz. The limit value is helpful to set a standard for the reliability of the low voltage breaker under a vibration environment. It is evident that the experimental results are in good agreement with that model results.

This work was supported by the National Natural Science Foundation of China (NSFC) under No. 11702168 and the Shanghai Science and Technology commission local colleges’ capacity building project: 14110501200.