Copyright © 2022 Hongxi Li, et al. This is an open access article distributed under the Creative Commons Attribution License, which permits unrestricted use, distribution, and reproduction in any medium, provided the original work is properly cited.

Flip-flow screen with crankshaft-link structure (FFSCLS) is effective for screening of high-water and fine materials. In this paper, a dynamic model governing the vibration and mechanical characteristics of the FFSCLS is proposed. In addition, the motion trajectory and vibration data of the FFSCLS were investigated by MATLAB/Simulink method. The results show that the MATLAB/Simulink method can fully describe the vibration characteristics of the FFSCLS with the maximum deviation within 6.71 % between experiment results. The mechanical characteristics of the FFSCLS were systematically studied by automatic dynamic simulation analysis using the ADMAS software. The MBD simulation results indicated that the resultant forces of the inner and outer screen boxes are always equal to 0. Moreover, the rotational speed of the crankshaft, the stiffness coefficient of the guild springs and rubber springs determined the mechanical characteristics of the flip-flow screen, and these parameters should be optimized. This work is helpful for the understanding of the combined effects of parameters and provides essential references for optimal design and efficient operation of a flip-flow screen with crank-link structure. Dry screening of viscous and fine-grained minerals plays an indispensable role in processing coal ore, and iron or gold deposited rocks, etc. [1-5]. However, conventional screening equipment (linear vibrating or circular vibrating screens) usually encounter many problems, such as low efficiency when processing moist materials [6-9]. Great advantages have been showed of flip-flow screen, including the enhancement of vibration strength, the function of automatic cleaning and the hard blockage of the mesh, etc. [10-12]. The flip-flow screen with elastic screen surface has been widely used for screening fine-grained minerals due to its good performance [13, 14]. To achieve the best screening performance of flip-flow screen with simultaneously increasing lifetime, a better understanding of its dynamics is necessary, thereby optimizing structural design [15].

Spring failure often occurs in the life cycle of screening equipments. Spring is an important factor to ensure the screening performance and safety of flip-flow screen. The adverse working conditions and violent alternating load may lead to the cracking of the guide spring, or result in the reduction of spring stiffness or even damage. Bearing stress analysis and correct selection have positive significance to improve the service life of bearing. Therefore, the development of high reliability and high efficiency of the screening equipment is imperative. In this paper, the dynamical characteristics of the flip-flow screen with crankshaft-link structure (FFSCLS) was systematically studied. The interaction forces of the inner and outer screen boxes with the crackshaft rotational speed, stiffness coefficient of the guide springs and rubber springs were carried out. At the same time, the service life of bearings was discussed. 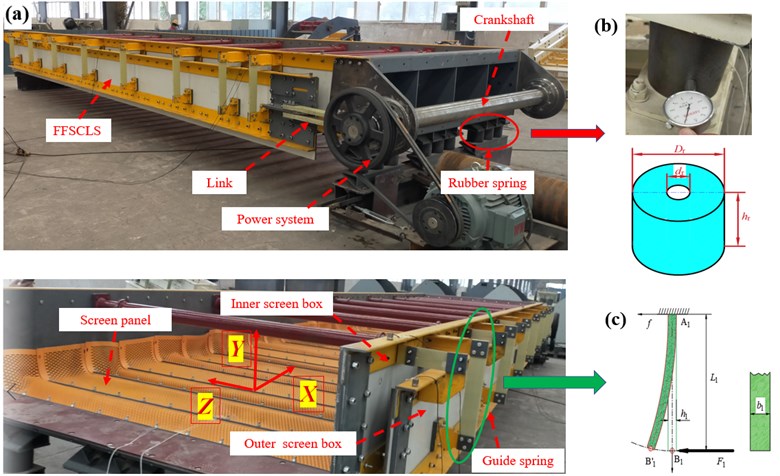 Fig. 2. Dynamical model of the FFSCLS

3.1. Dynamic analysis of the FFSCLS based on MATLAB/Simulink

The structural parameters of the FFSCLS are listed in Table 1. In order to further analyze the time domain dynamical characteristics of the FFSCLS, MATLAB/Simulink was used to establish a simulation model based on the dynamics model. Sine Wave module in Sources module library was used as excitation signal. Using this module, cosine signal was output, and sine signal was output when the phase increased /2. The Scope oscilloscope module in the receiver module library was used to output the displacement, velocity and acceleration signal curve, and the and simulation models of the inner and outer screen boxes are shown in Fig. 3.

Table 1. Parameters of the FFSCLS

According to Table 1, the corresponding sine and cosine excitation was applied respectively, the excitation angular frequency was 57.6 rad·s-1 which equal to 550 rpm, and the simulation time was set to 6 s. The time-domain response simulation results are shown in Fig. 4, and the Lissajous Figure of displacement in stable period is shown in Fig. 5.

Fig. 3. Simulation model of the outer and inner screen boxes 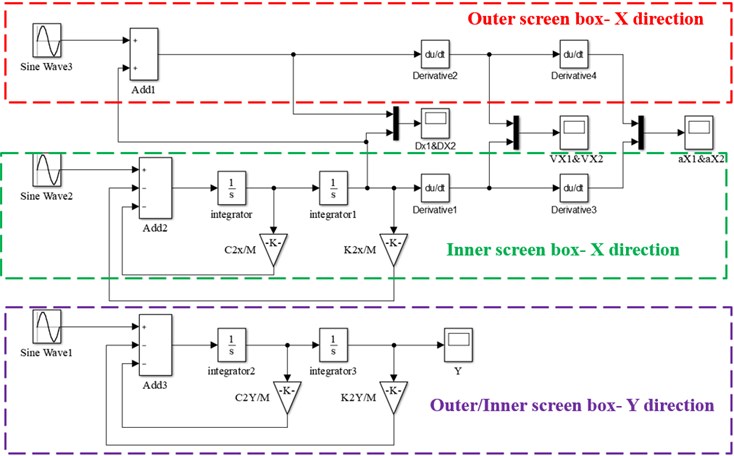 Fig. 5. Lissajous displacement patterns of the FFSCLS by simulation 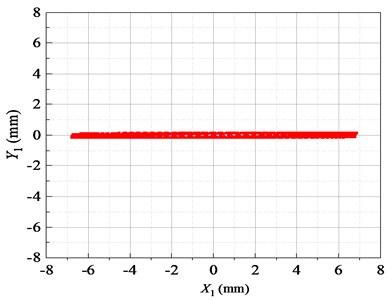 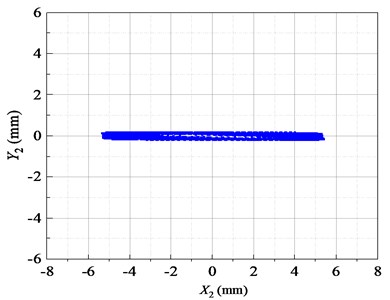 Fig. 6. Time-responses of vel. & acc. about the FFSCLS by simulation 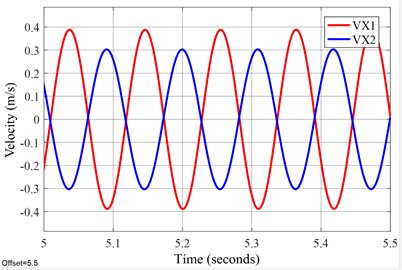 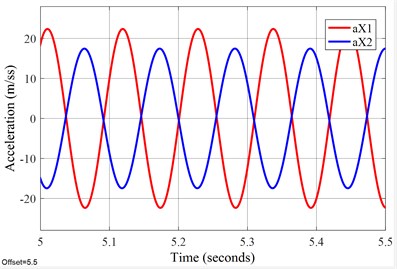 Table 2. Comparisons of MATLAB/Simulink and experimental results of the FFSCLS

3.2. Mechanical analysis of the FFSCLS based on multi-body dynamics

With the increase of production demand, the screening area, processing capacity and vibration quality of the flip-flow screen are also increasing. Due to the lack of a complete theory, guide springs cracking, bearings heating and other faults occur frequently. In this section, the mechanical analysis of the FFSCLS were carried out based on multi-body dynamics. The ADAMS software was selected to analyze the mechanical property of the flip-flow screen, such as interaction force (, ) between the outer screen box, inner screen box, and the crankshaft in the -direction. The ADAMS software consists of modeling, calculation, and postprocessing modules, which can be used to simulate the motion of the mechanical system, and to obtain the dynamics and dynamicals analysis at different times [21, 30, 31]. First, the three-dimensional model of the screen was simplified and established using the Creo Parametric software. Then, the entire model was converted into Parasolid format and imported into the ADAMS. Fig. 7 demonstrates the interface of the ADAMS software and parameters setting. The gravity acceleration was set as 9.81 m∙s-2. The material properties of the screen were selected to be steel and their corresponding densities were 7.80 × 103 kg∙m-3. The constraint form between the crankshaft and the inner screen box is defined as revolute pair and a rotational velocity excitation was applied to the constraint. The rotational velocity function is given as follows: STEP (time, 0, 0, , ) + STEP (time, , 0, , –), where is the amplitude of rotational velocity excitation and , , represents start-up time, deceleration time, off time, respectively. In this study, the values of , , and were 5 s, 35 s, 40 s, and 57.6 rad·s-1 (550 rpm), respectively.

Fig. 7. Interface of the ADAMS software and parameters setting 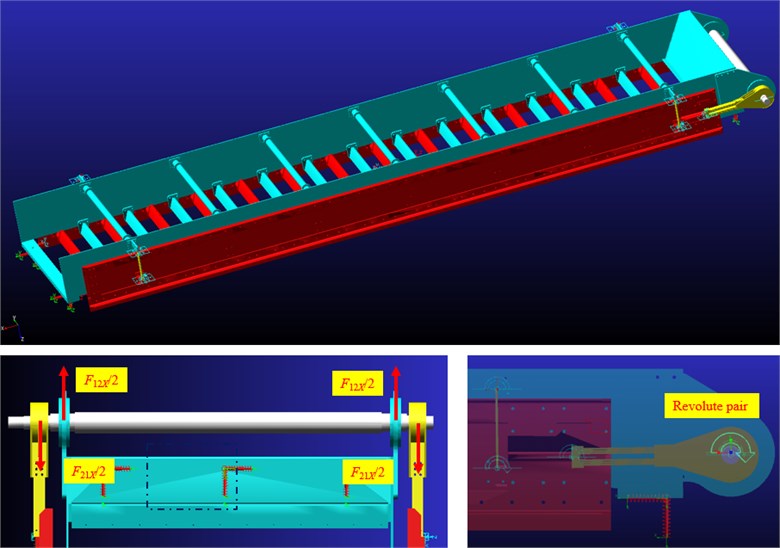 The mechanical property of the flip-flow screen was analyzed after the ADAMS simulation. Fig. 8 shows the time-domain curves of the interaction force along -direction obtained by simulation. At the starting stage (0 s-5 s), the rotational speed of the crankshaft gradually increases from 0 to 550 rpm. is a periodic load of variable amplitude, and the amplitude gradually increases with the increase of the rotational speed . When the crankshaft rotational speed is stable (5 s-35 s), the amplitude of basically remains unchanged. Then at the shutdown stage (35 s-40 s), the amplitude of gradually decreases to 0. The waveform trends of is similar to that of . It can be seen from the stable stage (5 s-35 s) that the phase difference between F12X and is 180°, and they are always equal in magnitude and opposite in direction. The resultant force of the inner and outer screen boxes in the direction is always equal to 0.

Fig. 8. Time domain responses of interaction force obtained by simulation: a) under full-time; b) under steady working condition 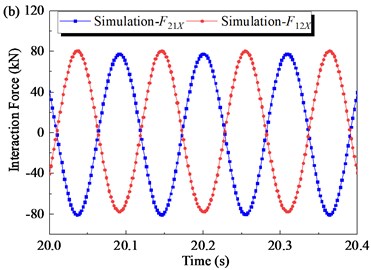 To research the effect of stiffness coefficient of the rubber springs on the mechanical property of the flip-flow screen, the of 835, 1250, 1670, 20 85 and 2505 N∙mm-1 were taken for discussion respectively. The amplitudes of interaction force (, ) under different are shown in Fig. 9b. The amplitudes of and decrease gradually with the increase of . The amplitude decreases from 79.3 kN to 77.6 kN when increases from 835 to 1670 N∙mm-1. Then, when further increases to 2505 N∙mm-1, the interaction force amplitude decreases to 75.7 kN.

At present, the service life of the rubber spring and the guide spring used on the screen is about 2-3 years, which can satisfy the production demand. At the same time, the shape size of the rubber and guide springs can be changed properly, which can effectively reduce the maximum stress, and improve the service life of the spring and the whole screening machine. 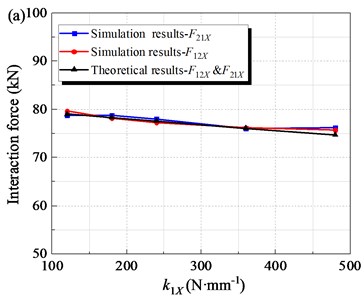 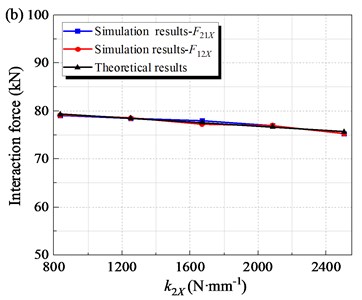 3.3. Analysis of the FFSCLS bearing life

Bearing life can be expressed as [32]:

where, is the bearing life, hour; is life index, for Aligning roller bearing ; is the rotational speed of the crackshaft, rpm; is rated dynamic load, N; is equivalent dynamic load, N.

The equivalent dynamic load is calculated as follows:

The driving part of the FFSCLS consists of two pairs of bearings, one pair is aligning roller bearing 22226 which connect the crankshaft to the inner screen box, and the other pair is aligning roller bearing 22320 connecting the crankshaft to the outter screen box. From the above analysis, it can be seen that the two pairs of bearings bear alternating loads with equal magnitude and opposite directions. Load amplitude is related to crankshaft rotational speed and spring stiffness. When the spring stiffness is determined, the load amplitude is only related to the crankshaft rotational speed.

Fig. 10. Roller bearings of the FFSCLS 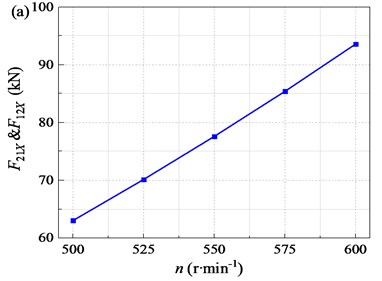 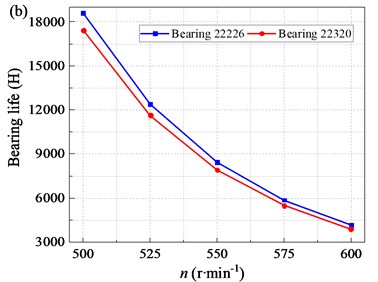 The correct selection of bearings has positive significance for improving the life of the bearing. As coal production enterprises become larger, there is an urgent need for the enlargement of the screening equipment. Larger screening equipment is bound to be accompanied by greater alternating load. Excessive alternating load may cause the bearing to be overheated in the short time, breaking the continuous of screening process and accelerating the damage of the bearings. Therefore, it is especially important for bearing force analysis and life calculation.

1) The vibration characteristics of the flip-flow screen with crank-link structure (FFSCLS) were studied through MATLAB/Simulink method. The dynamic characteristics and vibration behavior of inner and outer screen boxes were obtained. The waveforms of displacement, velocity and acceleration of inner and outer screen boxes in steady stage are standard sine waves. The trajectories of the outer and inner screen boxes approximates straight line. The results of experimental and MATLAB/Simulink have strong consistency with the maximum deviation of within 6.71 %. The vibration characteristics of the FFSCLS can be described perfectly with the dynamic model.

3) The bearing life was studied. With the increase of crankshaft speed, the bearing life continues to decrease. High crankshaft speed is not conducive to the service life of the whole machine, especially the service life of bearings. The force analysis and correct selection are the guarantee of the bearing service life. The analysis method can provide a feasibility for the enlargement of the FFSCLS and provide a certain reference for the promotion of this kind of screening equipment.

This work is financially supported by the National Natural Science Foundation of China (51904298), the Doctoral Scientific Research Foundation of Suzhou University (2020BS004).