Copyright © 2020 Yuming Yin, et al. This is an open access article distributed under the Creative Commons Attribution License, which permits unrestricted use, distribution, and reproduction in any medium, provided the original work is properly cited.

Hydro-pneumatic suspension (HPS) system are increasingly being implemented in commercial vehicles, owing to their superior performances under large load variations and wide range of terrain excitations [1]. The HPS system offers great design flexibility and proper-designed hydraulic-damping properties could provide enhanced attenuation of ride vibrations and roll/pitch motions [1, 2]. Over the past few decades, various structural designs of the HPS system have evolved, which generally comprise several gas and oil chambers. The gas, which provides the nonlinear suspension stiffness, may be separated from oil by a floating piston or a deformable diaphragm, or the gas and oil are contained within the same chamber [2-4]. The HPS design with chambers shared by the gas and oil may offer simpler alternative, lower cost, and greater robustness. However, this kind of design permits gas entrapment within the oil in the strut chambers and may introduce highly nonlinearities in stiffness and damping properties of the HPS system. The entrapment of gas within the oil during operation leads to gas-oil emulsion within the strut. The gas-oil emulsion is related to the various internal and external parameters which might result in greater variations in the gas and fluid properties, especially the free gas volume, fluid mass density, bulk modulus and fluid viscosity [3-5].

In this study, the nonlinear hydraulic damping property of a compact HPS system design with one mixed gas-oil chamber and one separate oil chamber are investigated. The static and dynamic properties of a prototype HPS strut are characterized in the laboratory under three different strut temperatures, in a wide frequency range. An analytical HPS model is derived considering the temperature variation, entrapped gas within the hydraulic oil, gas-oil emulsion flows through the coupling orifices and valves. The discharge coefficients of bleed orifice and check valve within the strut are subsequently identified using the model and measured data. The effects of temperature/frequency variations are also analyzed.

For the purpose of robustness and low cost, the hydro-pneumatic suspension system considered in this study, as illustrated in Fig. 1(a), is designed to comprise only two chambers which are coupled via bleed orifices and check valves. The rod-side chamber is filled with hydraulic oil, and the piston-side chamber contains both gas and hydraulic oil. The check valves will remain closed during extension stroke in order to obtain the favorable asymmetrical damping property, as indicated by the flow direction arrows in Fig. 1(a). The mixing of gas and oil during operation would result in the formation of gas-oil emulsion. Determined by the volume fraction of entrapped gas, the effective mass density, bulk modulus and viscosity of the gas-oil emulsion would thus be lower than those of the pure hydraulic oil [3, 6]. The emulsion flow characteristics across the coupling orifices/valves and the resultant hydraulic damping property of the hydro-pneumatic suspensions trut would thus be altered as well.

Laboratory experiments were performed on a prototype HPS system in order to acquire its internal and external response characteristics under pseudo-static and dynamic excitations. The detailed experimental setup was described in [7]. Briefly, the HPS system was vertically installed between an electro-hydraulic shaker via a force transducer and a fixed cross-beam, as illustrated in Fig. 1(b). The strut body temperature was monitored by a thermocouple attached to exterior surface of the strut. A cooling fan was used to maintain the temperature of the HPS strut within certain desired ranges during the tests, as also seen in Fig. 1(b). The hydraulic pressure within the two strut chambers were measured high-fidelity pressure sensors. The strut was sinusoidally excited at different frequencies, and a multi-channel data acquisition system was used to acquire the sensors’ data.

Fig. 1. a) Schematic of the hydro-pneumatic suspension, b) pictorial view of the laboratory test rig 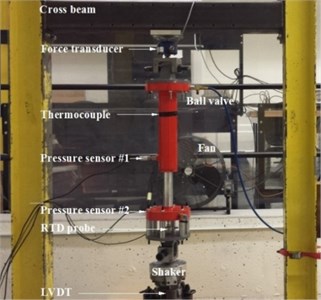 An analytical model of the HPS system is further formulated considering the variation in gas volume fraction within the emulsion, as well as the nonlinear emulsion flow between each chamber. The gas volume and gas pressure determine the stiffness property of the HPS, which can be reduced by the entrapment of gas within the hydraulic oil inside the strut. On the other hand, the primary hydraulic damping property is related to the fluid pressures within the two HPS strut chambers and properties of the gas-oil emulsion, as illustrated in Fig. 1(a), which are related to strut velocity and deflection. In this study, the fluid flows through the bleed orifices () and check valves () are assumed to be turbulent, and the leakage flow () through the strut seals is assumed laminar, the relations between the emulsion flows and fluid pressures can be expressed in the form of:

where (, , ) and (, , ) are discharge coefficient, opening area and number of bleed orifices and check valves, respectively; represents the average mass density of the gas-oil emulsions within the two HPS chambers; and is the leakage flow coefficient. It should be noted that the check valves are treated to remain closed when the pressure within piston-side chamber is greater than the pressure within rod-side chamber . The model parameters are obtained in part from the design dimensions and nominal oil properties, and in part identified on the basis of measured data. The data acquired in the 0.5-8 Hz range under different amplitudes of harmonic excitations are used to identify the fluid flow coefficients. The discharge coefficient for emulsion flow across the bleed orifices was identified from pressure variations during the extension stroke alone. The flow-related parameters were generally identified by minimizing the error between the simulated fluid pressures and the measured fluid pressures.

The nonlinear damping characteristics of the HPS strut with gas-oil emulsion are obtained from the analytical model and the measured data. Fig. 2(a) illustrates comparisons of force-velocity relations of the obtained from measurements and the model when subjected to excitation at 2 Hz and three different strut temperatures (30, 40 and 50 °C). The comparisons suggest reasonably good agreements between the model results and the measured data. The results show that the increase in temperature contributes to higher mean total force, which is attributed to the increased gas pressure within the strut. The hysteresis behaviour near zero velocity is mainly introduced by the seal friction, which is significant when the peak velocity is relatively lower as demonstrated here (50 mm/s). It can also be observed that the damping force during compression stroke (positive velocity) is lower than that during extension stroke (negative velocity), due to the opening/closing of check valves, as expected.

Fig. 2. a) Comparisons of force-velocity properties of the strut obtained from the model and the measured data under a 2 Hz excitation, b) variations in discharge coefficients 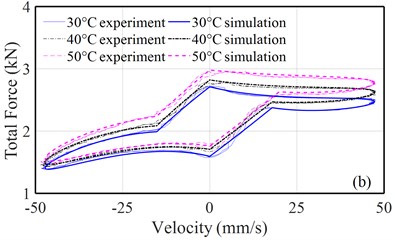 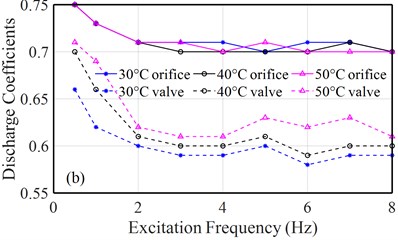 The nonlinear damping property of an HPS strut considering the property of gas-oil emulsion is obviously affected by the strut temperature and excitation frequency. The bleed orifices generally introduce lower damping effect than the check valves, due to the simpler structure design. Greater temperature tends to increase the discharge coefficient of the check valve, while it affects the bleed orifice only slightly. The variation in excitation frequency may alter the gas volume fraction within the emulsion and affects the hydraulic damping property of the HPS strut in a nonlinear manner.