Copyright © 2018 Xuefeng Suo, et al. This is an open access article distributed under the Creative Commons Attribution License, which permits unrestricted use, distribution, and reproduction in any medium, provided the original work is properly cited.

The working environment of mine dump truck is relatively harsh, thus the suspension system with poor performance will directly affect driver's driving comfort and physical and mental health. An oil cylinder is one of the key components of the hydro-pneumatic suspension system, however, the high friction levels between cylinder and piston would lead to ‘friction locking’ phenomenon in the practical application. In order to improve the vibration damping performance of hydro-pneumatic suspension system and enhance the comfortability of whole vehicle, a 110 t mine dump truck was studied by theoretical and experimental method. The results of this study show that increasing the length of cylinder guide can effectively decrease the cylinder vibration transmission rate and improve the driving comfortability of vehicle.

Hydro-pneumatic suspension is more and more popular for its nonlinearity of stiffness and damping, which improved the ride comfortability of the vehicle significantly. However, the frictional resistance between the cylinder and the piston affect the vibration damping of the cylinder. When the frictional force is too large, the ‘friction locking’ phenomenon may be occure between the cylinder and the piston, and then the cylinder lost vibration capability. The friction between cylinder and piston is affected by the pressure at the seal, the precision of the joint surface and the viscosity of the lubricant. During the operation of the hydro-pneumatic suspension system, the pressure in the air chamber and the oil chamber will constantly change, so the positive pressure at the seal will also change, and the friction will inevitably be affected. Here, the tightness of the seal is related to the temperature. When the load of the hydro-pneumatic suspension system changes frequently, the temperature will inevitably change to some extent. It will also affect the positive pressure at the seal and affect the frictional resistance. The length of the guide portion of the cylinder also has some influence on the performance of the cylinder.

In this paper, based on the research results of the above scholars, taking a 110 t mine dump truck front suspension as the research object, the influence of the guide part length of the front suspension on the vibration and the comfort of the vehicle was studied by theoretical and experiment.

2. Structure of the front suspension 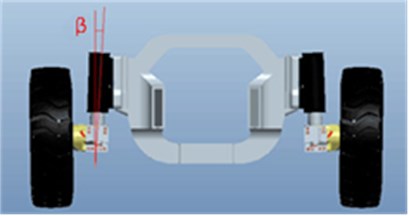 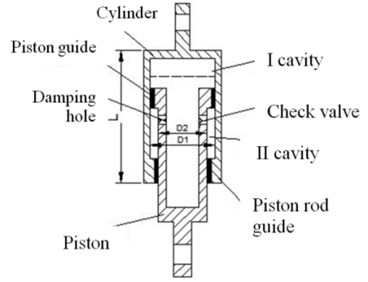 The internal structure of front suspension cylinder is shown in Fig. 2, which is mainly composed of two parts: cylinder and piston rod. The whole cylinder is divided into I cavity and II cavity, the upper part of I cavity is inert gas , the lower part is oil, and the II cavity (annular cavity) is filled with oil. The inert gas acts as an elastic element, and the oil acts as attenuating vibration and absorbing energy when it flows through the damping orifice and the check valve. The piston rod moves up and down along the road surface, so that the gas inside of the hydro-pneumatic spring is in a state of constant compression and expansion.

The piston guide and the piston rod guide play the role of guiding and sealing. The longer the guide portion is, the better its guiding property is. It can avoid the bending force of between the piston and the cylinder tube, decrease the cylinder vibration transmission rate and improve the riding comfortability of vehicles.

The pressure sensor and the displacement sensor are respectively installed on the front suspension cylinder, to observe whether appear the pressure step beating phenomenon or “friction locking” phenomenon.

Fig. 3 is no-load operating phase, the pressure and the displacement of the cylinders was measure. 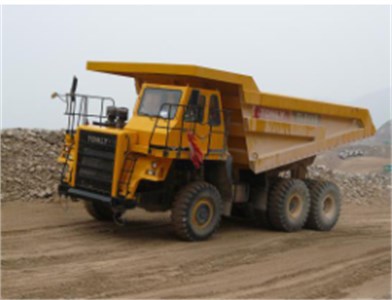 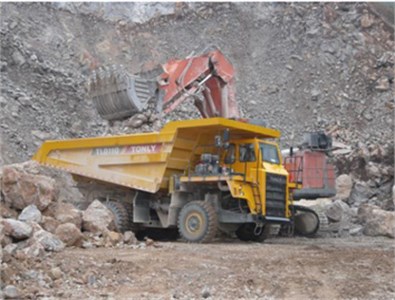 In order to obtain the influence of different guide length of front suspension cylinder on vehicle ride comfort, acceleration sensors are installed on the pedal, seat and backrest respectively, is shown in Fig. 6. Through the data analysis, the total weighted acceleration RMS value can be obtained. By comparing with the ISO 2631-1:1997 (E) standard [11], the vehicle ride comfortability can be obtained according to the different length of the cylinder. 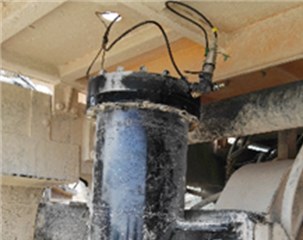 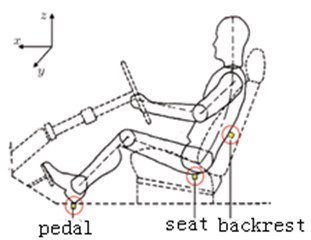 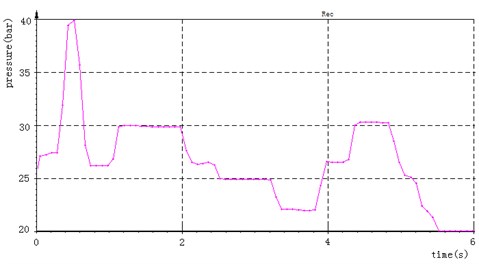 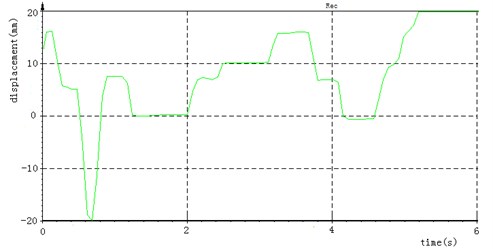 It can be seen that lengthening the length of the guide part can improve the ‘friction locking’ phenomenon, can better play the role of vibration absorber and can better protect the frame and tires.

Fig. 9. The guide length of the cylinder is 0.3 m pressure changes during loading process 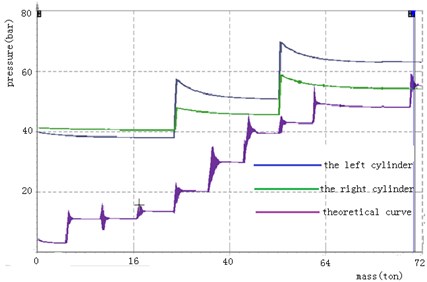 Fig. 10. The guide length of the cylinder is 0.5 m pressure changes during loading process 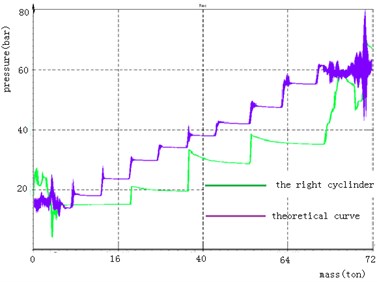 4.2. The vibration transmission rate of the cylinder with different length

where is the analysis time, is the time-domain signal of vibration response acceleration.

where is the analysis time, is the time-domain signal of vibration excitation acceleration: 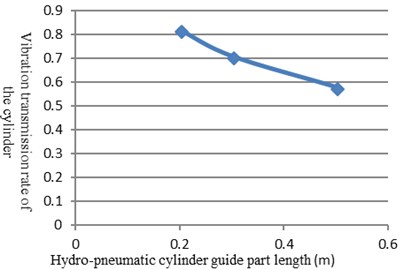 4.3. The riding comfortability of the vehicle with different cylinder

In order to analyze the influence of the different guide lengths of the cylinder on the vehicle comfort. In this paper, according to the standard of ISO 2631-1: 1997 (E), the RMS of the total weighted acceleration of vehicle pedals, seats and backrest, and it is used to evaluate the ride comfort of truck:

where for the acceleration spectral density function, for the axial frequency weighting function.

It can be seen from Fig. 12 that the value corresponding to the different guide lengths of the front suspension cylinder.

Fig. 12. The total weighted acceleration RMS curve with the length of the cylinder guide 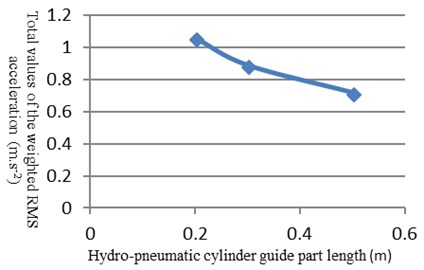 Adopting the method of lengthening the guide part of the cylinder can improve the cylinder pressure “friction locking” phenomenon and improve the ride comfortability of the vehicle. When the length of the guide part is increased from 0.2 m to 0.5 m, the RMS value is reduced by 32 %, and the riding comfortability of the vehicle is obviously improved. From the curve trend, the curve is more and more flat, indicating that as the guide part of the total acceleration of the value change is getting more and more smaller, so there is an optimal guide length according to the specific circumstances of the vehicle.

The authors would like to thank the guidance from the Professors in Chang’ an University. This paper was supported by Fundamental Research Funds for the Central Universities of China (Nos. 300102258110 and 310825171004).