Copyright © 2021 Wenlin Wang, et al. This is an open access article distributed under the Creative Commons Attribution License, which permits unrestricted use, distribution, and reproduction in any medium, provided the original work is properly cited.

A mathematical model describing the dynamic damping characteristics (DDC) of a high-speed rail hydraulic damper is built and experimentally validated, followed parameter effect simulation on DDC of the damper is conducted by using the model. Simulation results show that the change of rubber attachment stiffness and entrapped air ratio would have apparent influence on Force-displacement characteristics of the damper, i.e., increasing of rubber attachment stiffness would increase the main damping indices, but increasing of entrapped air ratio would decrease all of the dynamic damping characteristic indices apparently, so this implies that air entrapment of the fluid would apparently decrease the elasticity modulus of the fluid and weaken the dynamic characteristics of the damper. The established damper model and obtained result would be useful in the context of high-speed train research and design.

In previous research works, Zhou et al. [4] and Ou et al. [5] performed theoretical calculation approach and experimental research on dynamic damping characteristics (DDC) of rail hydraulic damper, respectively, Yuan et al. [6] studied on DDC of damper on train dynamics, but the above literatures all used the macro-level damper model described in [1-2], which does not include physical parameters of the damper, so it would be limited in predicting damper parameters influences on vehicle system dynamics. However, both of Mellado et al. [7] and Alonso et al. [8] have built simple-parameter models in simulating the obvious influences of physical parameter on DDC of the damper and vehicle system dynamics, Huang et al. [9] and Wang et al [10] both have established complex-parameter damper models in simulating dynamic behaviour of the damper and vehicle dynamics, but the parameters included are limited and the research works should go on.

In this study, a mathematical model describing DDC of a CRH 380 high-speed train hydraulic damper is built, the mathematical model is validated by simulation and testing. Followed parameter influence simulation is also carried out to uncover the effects of rubber attachment stiffness and fluid condition on DDC of the damper.

A mathematical model describing DDC of a CRH380 high-speed train hydraulic yaw damper, as shown in Fig. 1, is built. The transient damping force of the hydraulic damper during extension and compression can be respectively formulated by: 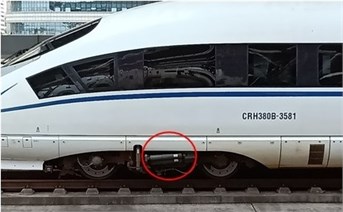 The flow continuity equation of the damper during extension and compression can be respectively formulated by:

As illustrated by Fig. 2, equivalent stiffness of the hydraulic damper comprises of the rubber attachment stiffness and the oil stiffness , so is formulated by: 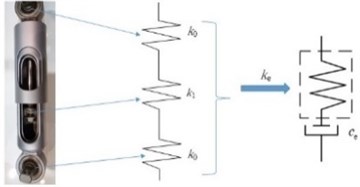 The oil stiffness can be described by:

for the extension stroke of the damper, and:

for the compression stroke, where is the displacement of the damper, and are heights of inner tube and piston.

Asa result, the above equations are coupled to obtain a full-parametric model, which describes the DDC of the hydraulic damper.

Fig. 3. Testing the damping characteristics in a MTS test rig 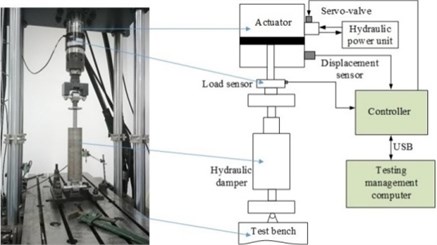 3.1. Effect of attachment stiffness on DDC

Parameter influence on DDC of the hydraulic yaw damper is simulated in MATLAB environment by means of the built mathematical model. Fig. 4 illustrates the influence of rubber attachment stiffness on main DDC indices. 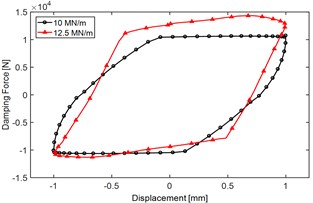 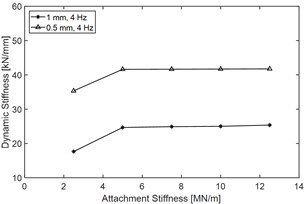 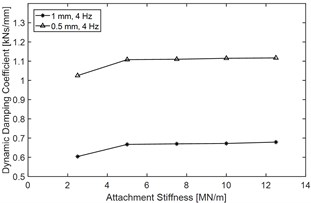 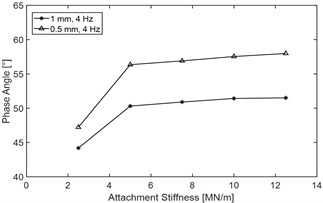 Table 1. The influence of attachment stiffness on main DDC indices and its rate of change

3.2. Effect of air entrapment in the fluid on DDC

Fig. 5 demonstrates the effect of entrapped air ratio on main indices of the DDC. Fig. 5(a) illustrates that variation of would lead to obvious change of Force-displacement characteristics, Fig. 5(b), (c) and (d) also show that with the increasing of , all of the DDC indices will decrease apparently, especially the phase angle will drop obviously, thus, it indicates that air entrapment of the fluid would apparently decrease the elasticity modulus of the fluid and weaken the dynamic performance of the damper.

Table 2 quantification ally compares the main DDC indices and its change rate when entrapped air ratio increases from 0.01 % to 0.04 %, and it demonstrates that increasing of would decrease almost all the main dynamic damping indices regardless of the excitation amplitude, for example, when the excitation amplitude is 1 mm, and ɛ increases from 0.01 % to 0.04 %, the dynamic stiffness would drop by 42.8 %, the dynamic damping coefficient would decrease by 21.4 %, and the phase angle would drop by 26.6 %.

Fig. 5. Effect of entrapped air ratio on main DDC indices of the hydraulic yaw damper: a) an illustration of force-displacement characteristics when with different entrapped air ratio, test condition: excitation frequency 2 Hz and amplitude 1 mm, b) dynamic stiffness vs. , c) dynamic damping coefficient vs. and d) phase angle vs. 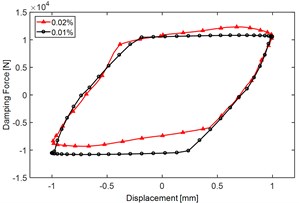 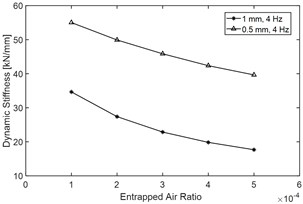 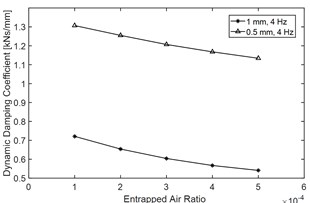 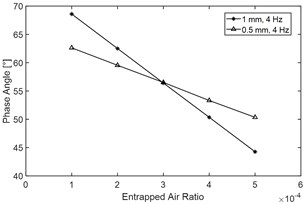 Table 2. The effect of entrapped air ratio on main DDC indices and its rate of change

Increasing of would increase almost all the main dynamic damping indices regardless of the excitation amplitude, when the amplitude is 1 mm, and increases from 2.5 MN/mm to 10 MN/mm, the dynamic stiffness would increase obviously by 41.7 %.

With the increasing of , all of the dynamic damping characteristic indices will decrease apparently, when the excitation amplitude is 1 mm, and ɛ increases from 0.01 % to 0.04 %, the dynamic stiffness would drop remarkably by 42.8 %. Thus, the analysis result implies that air entrapment of the fluid would apparently decrease the elasticity modulus of the fluid and weaken the DDC of the damper.

The authors would like to acknowledge funding from the National Natural Science Foundation of China (NSFC) under Grant No. 11572123 and the Research Funding for High-level Talent of Dongguan University of Technology under Project No. KCYXM2017026.