Copyright © 2019 Ilia Ivanov, et al. This is an open access article distributed under the Creative Commons Attribution License, which permits unrestricted use, distribution, and reproduction in any medium, provided the original work is properly cited.

A turbofan nonlinear dynamic model is described in the paper. It has been developed for the computation of loads in the engine frame after fan blade-out (FBO) event. The model includes reduced dynamic finite element models of rotors and casings and also nonlinear elements for simulation of “rotor-casing” contact interactions. Thorough attention has been paid to mounts modeling with possible mechanisms taken into account. The engine dynamic behavior during its rotors deceleration to the autorotation mode after the FBO event has been simulated for the following two forward mount arrangement variants: fastening to the inner part of the intermediate casing; fastening to the outer part of the intermediate casing. The effect of load reduction device (LRD) – special elements which are introduced to fan supports, destroyed under certain force and don’t transfer improper loads to the engine casing system after the FBO event, has been studied. The analysis of maximum loads on engine mounts has been performed for the two listed design variants for both cases: with and without an LRD in fan supports.

Fan blade out event is the load case which determines limit loads on engine frame elements. As a result of this event the released blade may break through the fan casing and also the engine frame elements might be destroyed under rotating unbalance force. Regulatory documents [1, 2] demand that FBO event must not lead to the listed catastrophic consequences. Thereby the designer should estimate mount loads caused by unbalance after FBO event.

The centrifugal force after FBO event may reach the values about 1.0∙106 N at maximum turbofan rotors velocities. This value is significantly more than loads caused by regular unbalances. The engine rotors are deformed under applied loads and blades may scrape the engine casings. The unbalance force is transferred through the rotor and its bearings to rotor supports, engine casings system and finally to mounts. The maximum loads in the turbofan frame elements after FBO event may occur either at the moment of FBO, when the unbalance force is applied, or at passing resonance during rotor slowing down. Complexity of the dynamic process and necessity of taking into consideration rotors and stators stiffness and inertial properties, gyroscopic effect, load application instant character and rotor deceleration law lead to demand of the special engine dynamic model for frame loads computation after FBO event.

The number of researches has been dedicated designing dynamic model of the rotor or the whole engine in order to calculate engine frame loads after FBO event [3-10]. The main approaches used in these papers are the following: simulation of full 3D finite element (FE) engine model during relatively short time interval [3-6] and use of the reduced model for the whole time interval, which is of great interest [7, 8]. The intermediate approach was developed in [9, 10], it includes full FE simulation of dynamics at the process beginning and simplified simulation during the rest part of the process. However, the contact interactions are not taken into account at the 2nd, the longest, process stage in these researches. This paper is the next step in the research described in [8].

The way in which engine mounts are arranged is one of the most important factors influencing the engine frame elements loads. The main variants of the engine front mount arrangement are following:

The examples of the listed mount arrangement variants are shown in Fig. 1.

Fig. 1. The examples of turbofans with different mount arrangement types 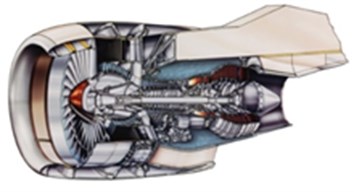 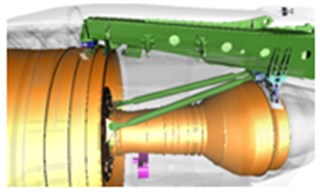 The 3D FE models of typical turbofan rotors and casings have been developed. The example of rotor FE model is shown in Fig. 2. The example of casing FE model is shown in Fig. 3. Static condensation technique [11] is used to reduce the number of computational model’s degrees of freedom. The application of this method is common for solving problems of rotating systems dynamics, [12-14]. However, it is possible to use more precise reduction techniques [15]. 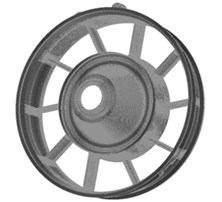 The model considers rotor-stator as well as rotor-rotor contacts. The contact is modeled by axisymmetric (point-point) contact element NLRGAP, which applies radial restoring force to both inner and outer points, if their relative displacement exceeds radial clearance. Detailed description of contact interactions modeling is given in paper [8]. Bearings were modeled as linear elastic elements. Though, more precise nonlinear bearing models can be used [16-18].

The problem is formulated as nonlinear differential equations system Eq. (1), which is solved iteratively in time domain, resulting in nonstationary process:

The assumed LP rotor deceleration curve is shown in Fig. 6. The angular velocity values are normalized to maximum angular velocity. It is needed to pay special attention to the fact that rotor does not stop its rotation, it slows down to autorotation frequency maintained by air flow. The greatest interest in this work are the maximum values of engine mount loads. This maximum is usually achieved at resonance pass during rotor deceleration. However, the behavior of the rotor on the autorotation mode should also be properly studied [19, 20]. Structural damping used in the model is equal to 12.5 % of critical damping at maximum operating rotating speed.

Implementation of the static condensation method for engine model development makes it impossible to take into account large displacements and non-linear material properties. This factors can be considered both in terms of simplified approaches [21, 22], and with full three-dimensional modeling [3-5, 9, 10]. Let us note that, nonlinear material properties account will not have a significant impact on engine mounts load values [10]. 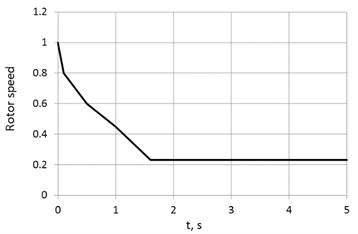 The computation results of engine mounts dynamic loads for the first variant of mounts arrangement are shown in the Fig. 7, for the second variant – in the Fig. 8. The presented values of forces were computed as geometrical sums of three orthogonal projections of corresponding forces vectors. All forces are normalized to unbalanced centrifugal force after FBO event at maximum rotor speed. The figures show that if the first mount arrangement variant is chosen, the maximum loads at front and aft mounts relate as 2:1, if the second mount arrangement variant is chosen – 1:3.5. The maximum loads are 20 % less in the second variant (0.5 vs 0.6). In all cases the maximum loads are achieved in 0.3-0.5 s after FBO event, i.e. when fan rotor speed is about 30-40 % less than its maximum value. 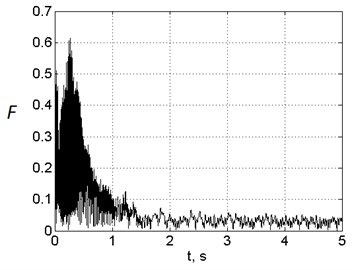 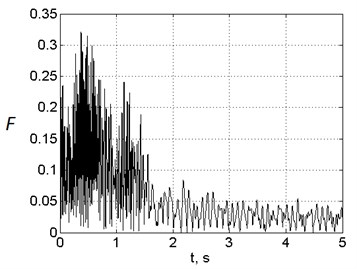 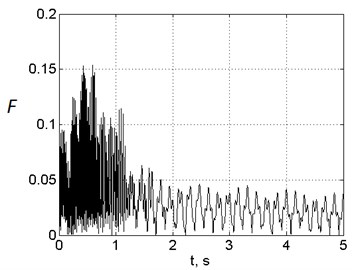 A special device is implemented in civil aircraft engines design to reduce the maximum engine mount loads after FBO event (load reduction device – LRD). It is a set of bolts with weakened cross-sections, which are destroyed under certain loads. After the LRD has been actuated front fan support disconnects and stops responding to the load. Consequently, properties of the dynamic engine structure are changed. The example of LRD design is shown in the Fig. 9. The study of LRD influence on the engine frame loads was performed in [7, 8, 23]. 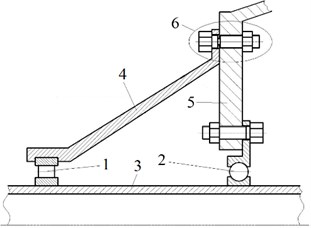 This paper is dedicated to the turbofan nonlinear dynamic model. It includes reduced models of rotors and casings and also possible contact interactions between them. The results of computation of engine dynamic behavior under the unbalanced force caused by FBO event show that in the considered example maximum mount loads are achieved when passing the resonance during rotors run-out. Mount loads are not maximum at the FBO moment. The pick values of mount loads are minimal if the first mount arrangement variant is used together with LRD in fan supports. If there is no LRD, the maximum loads are minimal when the second mount arrangement variant is used. These conclusions cannot be expanded to all civil turbofans. Engine dynamic behavior computations should be performed for every specific engine design taking into account stored experimental data about rotors deceleration curves after FBO event and system damping values.