Copyright © 2019 Deimantė Nasutavičienė, et al. This is an open access article distributed under the Creative Commons Attribution License, which permits unrestricted use, distribution, and reproduction in any medium, provided the original work is properly cited.

In a modern, constantly evolving world, people spend more and more time sitting down. When working in sitting position, even when seated correctly, the body muscles can shrink due to isometric processes. Blood circulation is disrupted for a long time in the state of isometric contraction, ischemia develops as capillaries are compressed, enough blood is not drawn into the muscles, and oxygen and energy materials do not enter into the muscles [1]. The long sitting position inhibits blood circulation in the legs and pelvis [2]. It has been shown that sitting for more than 10 hours per day compared to sitting less than 5 hours per day also increases the risk of cardiovascular disease (CVD) [3].

People who work with computers are more likely to experience mental fatigue. The health effects working at a computer are associated with psychosocial problems [5]. Psychophysiological changes in the long term form permanent pathological changes in cardiovascular and other body systems [6]. Data from psychological and physiological indicators show that working at a computer reduces the agility of high nerve activity between central connections, causing central nervous system fatigue, negatively affecting attention and thinking, as well as pronounced changes in cardiovascular performance [5].

McCraty with a team in 2015 (Heart Math Institute) investigated the impact of geomagnetic activity on human health. Their research has shown that there is a direct relationship between the rhythm of the heart and the magnetic field of the Earth. The human cardiovascular system resonates with the Earth's magnetic field in certain frequency ranges [8].

Doronin et al. measured 73 EEG spectra, heart rate, and blood pressure response times and compared it with low frequency rhythms in geomagnetic oscillations. The authors found that the oscillations in the Earth field have identical frequencies as the observed in the EEG, and effects are observed in almost all functions of the body, starting at the level of the cell and ending with the whole organism [10].

In a study conducted by K. S. Saroka it was confirmed that there is a direct relationship between the Earth's ionosphere electromagnetic vibration properties (measured by Schuman frequencies) and human brain activity (electroencephalogram, i.e., Delta, Theta, Alpha, Beta, Gamma wave ranges). The study found that particularly pronounced interactions were observed with the temporal brain sections [11]. Rusov and others have investigated the positive impact of Earth's magnetic field on the stability of human brain biorhythms, mainly in the Delta and Theta frequency range [12].

The idea that the Earth, Sun and other space bodies have an impact on human health and behaviour, social unrest, and important global events, has been studied by scientists for decades. However, disturbances and changes in the Earth’s magnetic field can cause sleep disturbances, confusion, unusual energy shortages, and a sense of strangeness [13].

To analyse the links between human physiological parameters and magnetic field variations, this work is done using magnetometer in Lithuania [13, 14].

For the purpose of the research, 27.10.2016 was obtained the permission of the Bioethics Centre of the Lithuanian University of Health Sciences (No. BEC-KN(B)-31). The survey lasted from November 2016 to January 2017.

The study included 21 women, working sedentary work. All subjects were familiarized with the research process. All participants fulfilled the informed consent form. The age and work characteristics of the subjects are presented in Table 1.

The electrocardiogram (ECG) was recorded and blood pressure measured four times for each subject (Fig. 2) during the workweek: on Monday and on Friday, before the beginning of work (between 8 and 10 am) and at the end of the work between 15 and 17 pm). 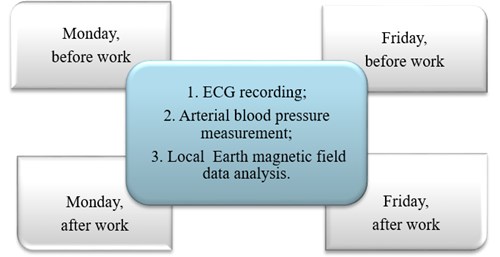 We analysed the following ECG parameters – RR interval and its variations, JT interval, QRS duration, and ST amplitude measured at 40 ms distance from J point (summed ST amplitude in 12 leads). During the study, the subject was comfortably seated on the chair and at rest, the ECG 12 leads synchronically were recorded for 5 minutes. The ECG parameters RR, JT and QRS were measured in the second standard lead. Being time parameters in different time scales (RR normal value is about 1 s, JT is about 0.25 s and QRS is about 0.1 s), we suggest, that they will correlate differently with different GMF fluctuation frequencies.

The arterial blood pressure was measured manually with the sphygmomanometer. The subject was comfortably seated on the chair and waiting about three minutes before taking a measurement so that the circulatory system comes to rest. The upper arm, which is commonly used to take the measurement, lied on a table at about the same level as the heart while the reading is being done. We analysed arterial blood pressure: systolic and diastolic values and their difference – pulse amplitude of blood pressure [16].

Local Geomagnetic Field (GMF) data is constantly recorded with a magnetometer provide to Lithuania by the HeartMath Institute, USA. The magnetometer captures local GMF fluctuation frequencies from 0 to 65 Hz at five intervals ([0; 3,5] Hz, [3,5; 7] Hz, [7; 15] Hz, [15; 32] Hz, [32; 65] Hz), which corresponds to the frequency ranges emitted by EEG, but to indicate that the ranges are determined by the Schumann resonances, we add the letter “S”, in SDelta, STheta, SAlfa, SBeta and SGamma frequency ranges [14]. Local magnetic field readings were recorded on days of the study (Fig. 3). Mean value of local GMF for every day of investigation and ECG parameters means for all recorded 5 min. strip where calculated and correlation between them were evaluated for all 21 investigated women. Data were recorded during the period – 01.12.2016 to 01.03.2017. 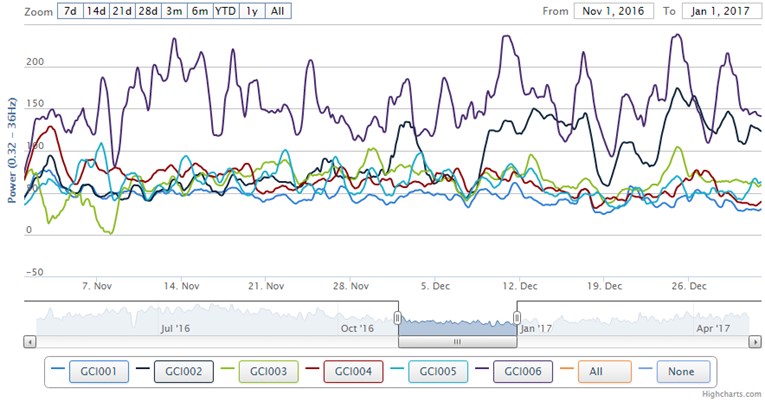 Data statistical analysis was performed using MS Excel and SPSS 23.0 for Windows program. The data is presented as an average ± standard deviation (M ± SD). The non-parametric Wilcoxon criterion was used to compare the two dependent samples. The strength of the relationship between the individual indicators was assessed by calculating the Spearman correlation coefficient. The difference, when 0.05, was considered statistically significant. The difference, when 0.15, was considered like tendency.

The changes of analysed ECG parameters during the workweek are presented in Table 2.

3.1. Changes of RR interval and local GMF correlations during workweek

During the workweek no significant correlations between RR interval and local GMF parameters (in different bands) were found, but some statistically significant tendencies of such correlations were observed.

At the beginning of the work week (in the morning) the tendency of negative correlation between local GMF in SDelta [0-3.5] Hz band and RR interval was observed ((21) = –0.393; 0.078), although at the end of work week this correlation became positive.

During the workweek negative correlations between RR intervals and local GMF in the STheta [3.5-7] band were revealed, although at the end of the week the tendency of positive correlation was established ((21) = 0.414; 0.062).

Correlations between GMF power in SAlpha and SBeta frequencies bands and RR intervals became more positive during workweek: from Monday to Friday ((21) = 0.333; 0.140) (Fig. 4).

In summarizing the changes of correlations between GMF and RR intervals during the workweek, it would be difficult at the moment to identify the mechanisms that have impact on such changes and how exactly they are connected with human functioning.

3.2. Changes of JT interval and local GMF correlations during workweek

The correlations of QRS duration and local GMF were significantly more expressed than the correlation between the RR and JT intervals and GMF. 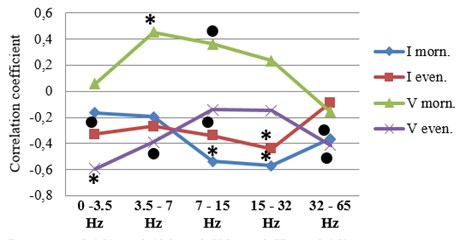 In summary it can be stated that changes in the QRS duration and GMF are associated with adaptations in the heart’s regulatory mechanisms.

3.4. Changes of ST amplitude and local GMF correlations during workweek

During the workweek ST amplitude was constantly increasing, which may be related to the effects of increasing fatigue (Table 2).

All values of ABP are presented in table 3. During the evening we see small increase in systolic (sABP), diastolic (dABP) as well in pulse amplitude pABP = (sABP – dABP) of ABP.

During the week, the magnitude of the Earth’s magnetic field (local GMF power) and the systolic blood pressure (sABP) of the subjects in relation to all frequencies intervals of local GMF have small, non-significant correlations (Fig. 8).

At the end of the week in the morning significant negative correlations were observed in GMF SGamma [32-65] Hz band and diastolic arterial blood pressure. In the evening a significant correlation was observed only in the SDelta [0-3.5] Hz band ((21) = –0.474; 0.03).

We observed that as fatigue increased correlations become more positive. Such changes were clearly expressed, not only in low frequencies intervals, but also in the SGamma [32-65] Hz band. So, it could be concluded, that diastolic arterial blood pressure appears to be sensitive to the local GMF changes and human fatigue.

Scientific research about Earth’s magnetic field activity influencing human health has revealed that arterial blood pressure is significant increased due to geomagnetic activity level: both systolic and diastolic blood pressure increased the day before until the day after the geomagnetic storm. These effects were observed despite medications being used or gender [17]. In this research, we evaluated the correlations between the local GMF activity during a workweek in middle aged women, but the results showed that a person’s physiological characteristics are constantly changing especially as fatigue increases. There is a lot of scientific researches about heart rate and GMF [18, 19], but investigations about the impact of GMF power in different frequency bands on human health or changes of separate ECG parameters are missing.

Scientists [20, 21] are investigating the correlations between the heart rate disturbances and GMF, but do not analyse data according to different GMF frequency intervals. Sasonko et al. (2018) performed investigation about correlation between RR, QT and PQ intervals with number of atmospheric factors and global GMF [22]. They found that humans have changing sensitivity for these factors, which was confirmed in our study. Dimitrova et al. [23] investigated coherence between arterial blood pressure and index of global GMF, however its still remain unclear how global GMF influence local GMF and in what frequencies it can manifest.

1) The most significant correlations between local GMF and ECG and arterial blood pressure parameters were found with the low frequency field, the most often in SDelta [0-3.5] Hz and STheta [3.5-7] Hz bands.

2) The correlations between ECG parameters (RR, JT and QRS intervals ant ST amplitude) during the working week changed from negative to positive – which appears to be associated with fatigue influence on person sensitivity to local GMF.

4) All ECG and arterial blood pressure parameters showed great variability in correlation with local GMF. It can be associated with changing human sensitivity to GMF due to increasing fatigue.

We investigated only women. Investigation was performed only in one season – winter, number of investigated persons was only 21. Geomagnetic field influence delay on human fatigue was not investigated.