A technique for estimating geometrical synchronization of biomedical signals

Copyright © 2019 Inga Timofejeva, et al. This is an open access article distributed under the Creative Commons Attribution License, which permits unrestricted use, distribution, and reproduction in any medium, provided the original work is properly cited.

A technique for the evaluation of geometrical synchronization between data signals based on optimal attractor reconstruction is demonstrated and validated using coupled chaotic logistic maps. The measure is then applied to estimate the degree of synchronization between human heart rate variability and Earth’s local geomagnetic activity.

Evaluation of synchronization between data signals is a broadly discussed concept among researchers since it can be applied in the analysis of a wide range of phenomena. Several examples include analysis of biomedical signals in health sciences and biological systems, investigation of coupled circuits or laser systems in electronics and optics [1-3].

In [4, 5] we proposed a technique capable of estimating the degree of geometrical synchronization via near-optimal chaotic attractor embedding. In this paper, the measure is demonstrated and validated using the example of two coupled chaotic logistic maps. The technique is then applied to assess the impact of Earth’s local magnetic field on individual’s biomedical parameters.

Geometrical similarity between two time series can be estimated via the algorithms developed and validated in [4, 5]. A brief overview of those algorithms is presented below. The feasibility of the discussed approach is demonstrated by considering two logistic maps with diﬀusive coupling:

where (such parameter values result in chaotic behavior); is the coupling parameter (low values of result in low synchronization between maps and vice versa). Initial conditions are set to and .

Two resulting trajectories , of size 6000 are sampled using Eq. (1) after transient processes die down. Fig. 1(a) illustrates the evolution of and and the diﬀerence when two logistic maps are uncoupled (). Fig. 1(b) depicts , , and when and Fig. 1(c) corresponds to . It can be seen that the similarity between trajectories and increases as the coupling parameter increases; however, the diﬀerence remains chaotic even at (see Fig. 1).

Fig. 1. The trajectories of coupled logistic maps (see Eq. (1)) for diﬀerent values of the coupling parameter . Parts a), b) and c) illustrate and at , and respectively

In order to evaluate geometrical synchronization between and , both data signals are split into equal-sized segments of size . The resulting segments , , are then mapped onto integers , , denoted as optimal time lags using the steps below:

The obtained set of the embedded points is called an attractor (see Fig. 2(b)).

3) Compute the area of reconstructed attractor using the following formula for each :

4) Determine the optimal time lag resulting in the largest area of the attractor (see Fig. 2(c)):

It was shown in [4, 5] that the optimal time lag can be used as a scalar feature representing the geometrical properties of the analyzed data signal.

Fig. 2. Part a) depicts one segment of data signal displayed in Fig. 1(b). Parts b) and c) illustrate the corresponding reconstructed attractors at and (optimal time lag), respectively 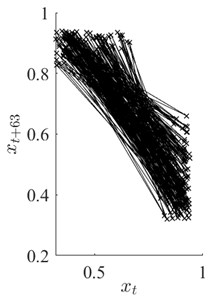 Geometrical synchronization between data signals and is then estimated as the Pearson correlation coefficient between optimal time lag vectors and . Optimal time lags for and are represented in Fig. 3 for three values of coupling parameter . It can be seen that the correlation between sequences of optimal time lags is 0.1759, 0.5714 and –0.9934 at 0, 0.13 and 0.16 respectively. Obtained results show that described geometrical synchronization estimation algorithm based on the optimal attractor embedding is able to detect the similarity between two chaotic data signals in an eﬀective and eﬃcient way. 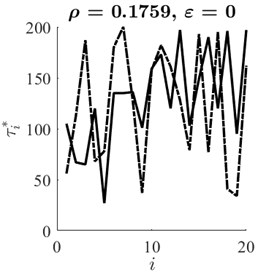 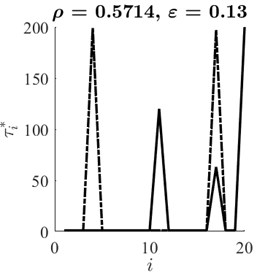 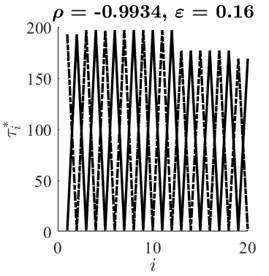 In order to assess the impact of magnetic field on human’s biomedical parameters the following experiment was conducted:

measured using the magnetometer located in Lithuania. Spectral power of the local magnetic field () was then computed using obtained intensity values by summing the spectrogram (evaluated for one-second intervals) over the physically relevant frequency range [0.2; 3.5] Hz [4].

3.2. Application of the synchronization estimation algorithm

Fig. 4. Mean synchronization between RR data series and magnetic field power for each day of the experiment 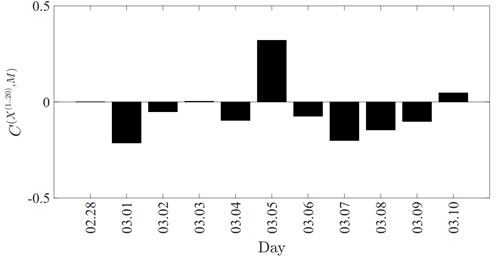