Copyright © 2019 Hristijan Mickoski, et al. This is an open access article distributed under the Creative Commons Attribution License, which permits unrestricted use, distribution, and reproduction in any medium, provided the original work is properly cited.

This paper presents computational modeling results of a mechanism with hydraulic drive system that performs linear or transversal motion. This mechanism is commonly used in the construction mechanization and the simulation model analysis is obtained by using Matlab/Simulink. Connection of mechanical and hydraulic elements makes this mechanism quite specific and the linking of the mechanical and hydraulic parts is presented. The simulation modeling allows the force and velocity of piston from hydraulic cylinder to be obtained which are necessary components for further projecting of hydraulic drive system.

Numerous manufacturing and logging machines or transport and handling devices in many industrial sectors use hydraulic systems. For fulfill increasingly standards and requirements, on the other hand achieving quality of production and productivity more accurate mechanisms are created by combining hydraulics, electronics and computer technique [1].

Approaches for simulation and modeling of the systems combined of mechanical, hydraulic and electric parts are many and the most common used software packages among engineers is Matlab which include a subset with tools, Simulink and provides opportunity to build and simulate linear and nonlinear systems. Simulink used model-based design process that allows fast and effective development of dynamic systems, including systems for control, signal processing and communication systems [2]. The model-based engineering is the formalized application of modeling to support system requirements, design, analysis, verification and validation activities beginning in the conceptual design phase and continuing throughout development and later life cycle phases [3]. Like any model-based system design, the usual practice in controller development for an advanced excavator system is to derive the system model first and then develop a controller based on the model. Therefore, deriving a system model is a critical component in the development of an excavator [4].

In [5] is presented modeling method of hydraulic arm which serves as a testing device for basics research in intelligent prosthesis development. The arm model combines mechanical, hydraulic and electric subsystems and uses Matlab as modeling tool with basic task of performing of simple rod movement from one limit position to the other, within rod outer limits. Mathematical simulation of dynamics of a hydraulic system with proportional control valve, linear hydraulic cylinder and mass load is presented in [6]. The mathematical model is created by using Matlab SimHydraulics software allowing to solve the mathematical model based on the physical principle. The subsystems for hydraulic system and for loading were also created in the model for better clarity. 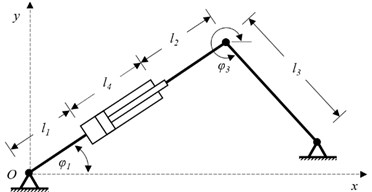 The piston force in extension strokes can be obtained through:

where, is coefficient that takes into account the friction resistance of the pair piston – cylinder and is pressure in the cylinder (opposite rod), is full bore piston diameter. In retraction strokes the piston force is:

where, pressure acting on the rod side and is piston rod diameter.

The operating pressure in the cylinder is determined as:

where, is safety coefficient. The flow of hydraulic fluid is determined by the following relation:

The effective power of the hydro cylinder when it is in extension strokes is determinate as:

where, is the speed of the displacer piston in the hydraulic cylinder.

where, is fluid velocity in the tubes. From here, the determination of the required thickness of the wall of the pressure pipes is obtained as [10]:

where, is stress of pipes material and is maximum fluid pressure in the installation.

3. Simulation of the model and obtained results 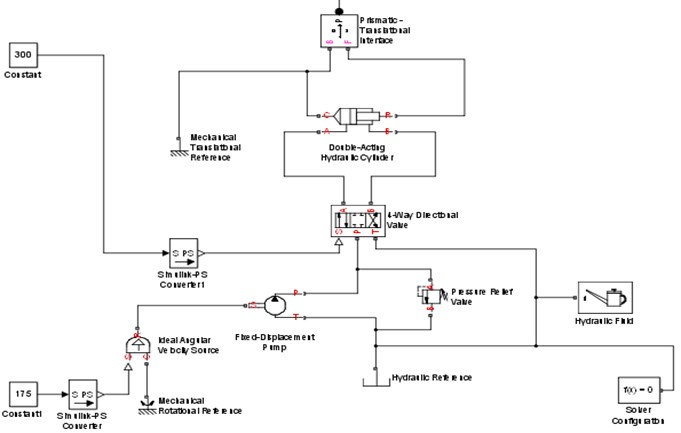 The way of connecting the subsystems between hydraulic and mechanical part is presented on Fig. 4.

The model of the mechanism including mechanical and hydraulic parts is shown on Fig. 5. 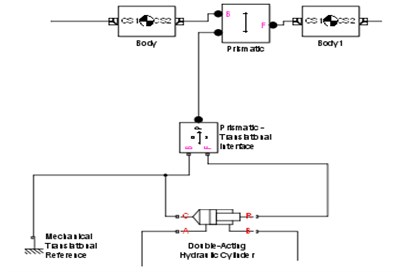 Fig. 5. Model of the mechanism including mechanical and hydraulic parts 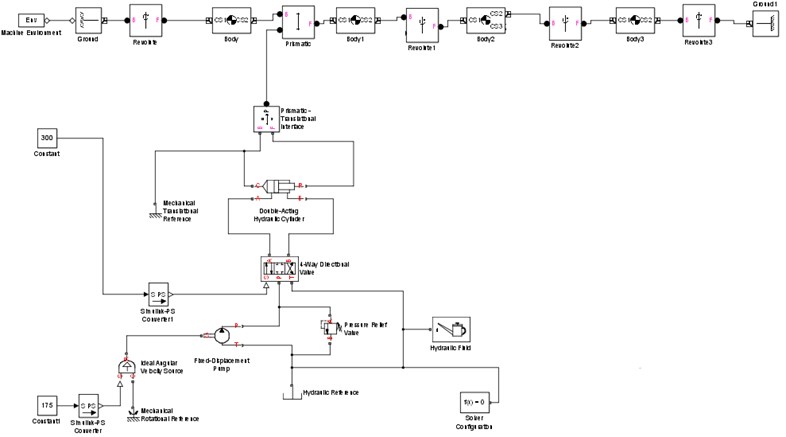 To obtain the displacement, velocity, acceleration and the force of the piston, subsystems are introduced and the completed simulation model of the analyzed mechanism is shown in Fig. 6.

Fig. 6. Simulation model of the mechanism 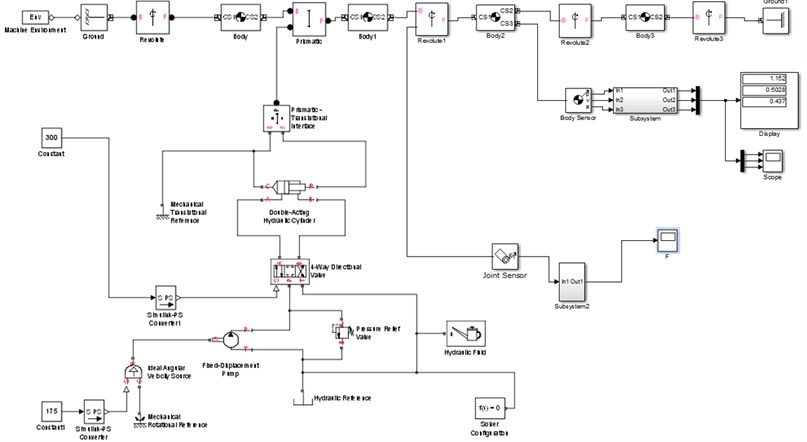 Fig. 7. Piston force in a) extension and b) retraction stroke

Fig. 8 presents the diagrams on which is shown displacement, velocity and acceleration of piston from the hydraulic cylinder. The velocity of movement of the piston in extension strokes (Fig. 8(b)) is significant parameter necessary for further projection of the model for simulation and also for selection of hydraulic drive system.

Fig. 8. a) Displacement, b) velocity and c) acceleration of the piston

Simulation model of mechanism with hydraulic drive system that performs linear or transversal motion is presented in this paper. Through building a simulation model, the process of manual calculation is simplified. The force, displacement, velocity and acceleration of the piston from hydraulic cylinder are obtained from the presented model. This model-based design is a process that allows simplified development of dynamic systems and allows from obtained computational modeling results further optimal design of hydraulic drive system to be achieve.

Connection of mechanical and hydraulic elements makes this mechanism pretty specific. Connection between these two types of elements is made by using block Prismatic Translation Interface. Modeling of hydraulic parts is done using the library SimHydraulics and the mechanical parts of the mechanism with SimMechanics. This allows connection between the cylinder and translation joint to be made and to create model that will contribute to the design and further development of similar dynamic hydraulic drive system.