Copyright © 2019 Harika Beste Ökmen, et al. This is an open access article distributed under the Creative Commons Attribution License, which permits unrestricted use, distribution, and reproduction in any medium, provided the original work is properly cited.

Purpose: Molecular genetic knowledge of clear-cell renal-cell carcinoma (CCRCC) plays an important role in predicting the prognosis and may be used as a guide in treatment decisions and the conception of clinical trials. It would then be desirable to predict these mutations non-invasively from CT images which are already available for CCRCC patients. Methods: TCGAKIRC data were obtained from the National Cancer Institute’s (NCI) image dataset. We used 191 patient data of which 63 were associated with PBRM1 mutations. The tumors were delineated by a radiologist with over 10 years of experience, on slices that displayed the largest diameter of the tumor. Features were extracted and normalized. After feature selection, the KNN classification with Random Subspace method was used as it is known to have advantages over the simple k-nearest-neighbor method. Results: Prediction accuracy for PBRM1 was found 83.8 %. Conclusions: A single slice of the CT scan image of CCRCC can be used for predicting PBRM1 mutations using KNN classification in Random Subspaces with an acceptable accuracy.

Renal Cell Carcinoma (RCC) is the most encountered type of renal cancer and represents about 3.7 % of new cancer occurrences. Just in The United States, RCC accounted for about 61.560 new patients and 14.080 deaths in year 2015. It is known that certain genes which have mutations can activate intracellular molecular pathways. These specific pathways lead to an increased risk of specific histological subtypes of RCC. This knowledge has helped us to better understand the pathogenesis of RCC and RCC has been divided into subtypes related to genetic structure and mutation status. According to the WHO, there are eight major subtypes of adult-onset RCC. Clear cell Renal Cell Carcinoma (CCRCC) is the most encountered one. Approximately 20 % of patients have metastatic disease at presentation. More than half of the patients develop metastases after the initial diagnosis.

Recently, the comprehension of the genetic base of RCC has improved research and led to the discovery of novel anticancer agents targeting specific intracellular pathways [1].

Polybromo-1 (PBRM1) gene is the second most common mutation and is seen in 40 % of these patients. The mutation encodes the protein BRG1-associated factor (BAF) 180 [2]. It affects the critical cellular processes by regulating cell-cycle changes, metabolism, and DNA repair [3].

There have been studies indicating that this gene is valuable because it has an impact on survival [4]. One of the studies about PBRM1 indicated that decrease of PBRM1 expression is linked with a bad prognosis and increased clinicopathological features in patients with RCC [5]. Another study with RCC stage-4 patients reported that this gene could have potential as a prognostic marker for advanced RCC [6]. Moreover, other studies indicate that the PBRM1 mutation status has a great potential to identify CCRCC and has noticeable effects on disease progression [7, 8] and may affect the new treatment strategies [9].

Recently several studies concentrated on gene mutation prediction for cancer patients from medical images noninvasively [10]. Few studies focused on the prediction of the PBRM1 gene mutation for CCRCC patients from imaging studies [11,12,13]. In [11], associations between imaging features determined by radiologists and the genetic mutation status were found. In [12], a multi-classifier multi-objective radiogenomics model was developed. In [13], an artificial neural network (ANN) and a random forest (RF) algorithm were used for classification. Since the original dataset was small, multiple slices were used for feature extraction in order to increase the sample size.

A general challenge in these studies is to deal with small and noisy datasets.

In this study, the goal was to address these issues and develop a method for predicting the PBRM1 gene mutation non-invasively using CT images and the KNN classification method with Random Subspaces for the first time. KNN is known to have several advantages such as simplicity and performance. Random Subspace Method for kNN Classification was shown to improve accuracy [14]. This superiority was demonstrated to be preserved with even smaller number of training samples, a condition often encountered with radiogenomic data.

The main novel contributions of this work are:

– The KNN method in Random Subspaces has been applied to CCRCC Radiogenomics for the first time,

In the following, the methods used for predicting the PBRM1 gene mutation will be outlined. First the data used will be described. Then, image processing steps will be given. Results from classification will be discussed in view of the literature and necessary future work will be indicated.

The partnership between the National Cancer Institute (NCI) and the National Human Genome Research Institute (NHGRI) has provided information on key genomic alterations in 33 identified cancer types, including CCRCC [15, 16]. TCGA-KIRC data set which has the disease type Adenomas and Adenocarcinomas of Kidney was used for this study. We used 191 scans from the dataset. 63 patients had the PBRM1 mutation.

The tissue of interest was carefully delineated by a radiologist with over 10 years old experiences using ImageJ [17] software. The slices were considered to include the largest tumor area for each patient obtained from TCGA-KIRC data. A sample ROI is shown in Fig. 1. After the regions of interest (ROI) were drawn, radiogenomic features were extracted. These included gray level patterns, inter-voxel relationships, shape and texture features. In this step, 136 radiographic features were generated, and a high dimensional feature matrix was created. The software platforms Image J with texture analyzer plugin [18], MIPAV [19] and LifeX [20] were used.

Extracted radiogenomic features included shape, intensity and texture features. Unbalanced data were [21] handled for balancing by using the ADASYN algorithm which represents an extended version of SMOTE. After -tests on individual features, and neighborhood component analysis (FSCNCA) [22], the reduced number of features obtained was nine.

After the feature selection process, classifications were performed using Matlab R2019a. The confusion matrix was used to evaluate the results. Validation selection was set to 5-Fold cross validation (5). The selected model type was KNN with Random Subspace [14].

Fig. 1. The tumor in the right kidney which had the PBRM1 mutation is indicated by the yellow contour 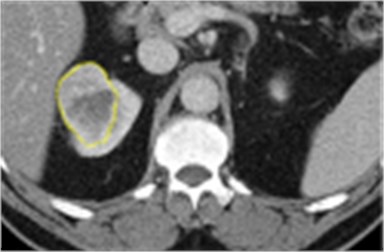 Our results showed that using classification learner, KNN with Random Subspace model can correctly predict PBRM1 and NON-PBRM1 data with 83.8 % (see Figs. 2 and 3). 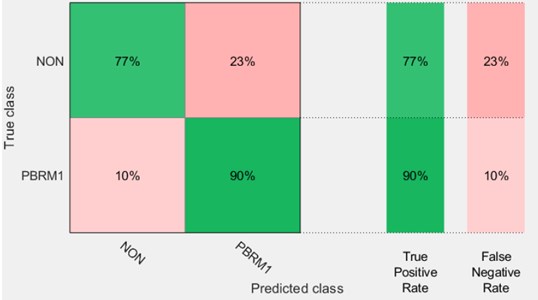 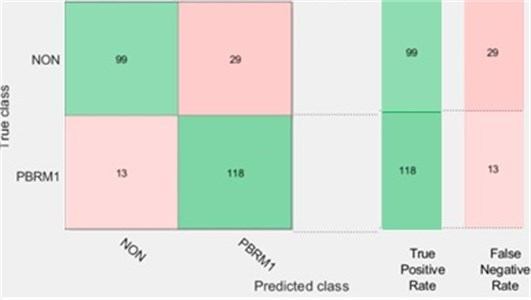 The goal of this study was to predict the PBRM1 gene mutation noninvasively using a single slice of a CT Image study for CCRCC patients. Predicting gene mutations is important for prognostic and therapy selection purposes. KNN classification with random subspace was used. The results of the study were presented in Fig. 2 and Fig. 3. These results show that the PBRM1 gene mutation could be predicted with a sensitivity of 90 % and a specificity of 77.5 %. Overall accuracy was determined as 83.8 %.

There is some evidence that these mutations influence the response to therapy [23]. Therefore, the implication of this study is that the non-invasive nature and the practical single slice approach of this technique may make it very useful in therapy selection.

The accuracy obtained is similar to the one obtained in a previous study (78 % in [12]). Up to 95 % accuracy was reported in another study [13] conducted with a total of 45 patients. However, the main disadvantage of these studies was the low number of patients and the lack of a large independent test dataset.

The study presented here was conducted with a larger patient dataset (191). However, the images were not standardized. Data included images from different CT scanners, contrast and non-contrast images.

In the future, using larger and more uniform datasets could increase the present performance. Practical implementation may require quick and accurate 3D methods for tumor delineation. Studies with better automatic 3-D segmentation algorithms may increase both the speed and the performance of these algorithms.

A practical machine learning implementation has been realized for the non-invasive determination of the mutation status of PBRM1 Mutation for Clear Cell Renal Cell Carcinoma patients. The KNN with Random Subspace was shown to be an adequate method for this task. More research is needed to increase both the accuracy and speed by using automated 3D segmentation algorithms and larger and standard datasets.

The results shown in this study are based on data made available within the by the TCGA Research Network: http://cancergenome.nih.gov/.