Copyright © 2019 Qi Wu, et al. This is an open access article distributed under the Creative Commons Attribution License, which permits unrestricted use, distribution, and reproduction in any medium, provided the original work is properly cited.

With large number of municipal solid waste incineration power generation plants appearing, serious environmental pollution will be caused if temperature cracks appear in waste bunkers. To reveal the interaction between the surrounding soil and bunker walls under the action of temperature, a finite element model is established. Considering the surrounding soil layer, the characteristics and influence laws of the interaction between the municipal solid waste bunker and the soil under different temperature conditions are studied. The simulation results show that the existence of the surrounding soil layer will affect the stress distribution, mainly at the bottom of the bunker and the surface of the bunker wall. Due to the thermal expansion and contraction, the municipal solid waste bunker is pressed during the heating process. In the process of cooling, there will be excessive tensile stress at the bottom of the bunker. To address this problem, expansion belt is arranged at the stress concentration portion to reduce the stress concentration. This measure proves to be effective according to analysis results, which provides a reference for the design of municipal solid waste bunkers. 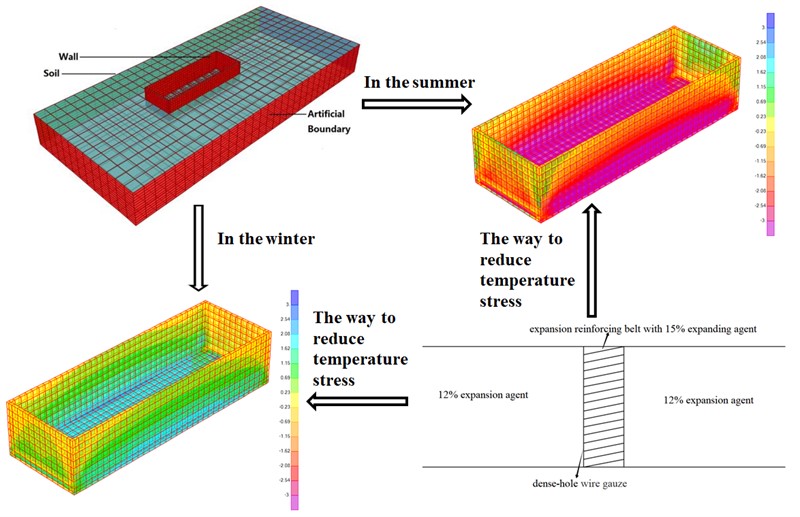 With the rapid development of social economy and the increasing population, the speed of urbanization is also rapidly progressing. Therefore, waste and industrial waste are also increasing rapidly, and urban waste disposal has become a tough problem.

The current urban waste treatment methods mainly include sanitary landfill, high temperature composting and incineration. Landfill treatment requires a large amount of land, and harmful components in the waste products will pollute the atmosphere, soil, and water sources, seriously damage the ecological environment and adversely affect human health. High temperature composting is another waste treatment method. The organic matter with high organic content is selected to form organic fertilizer through fermentation. However, composting does not reduce land use and still requires a large amount of land. The incineration process method first burns the waste in an incinerator to release heat, and the rest of the heat can be recovered for heating or power generation. The flue gas is discharged after purified. The flue gas is discharged after purified and small amount of residue is landfilled or used for other purposes. The method has the advantages that the high temperature is harmless, the occupied area is not large, the influence on the surrounding environment is small, and the heat generated by the garbage incineration can be used for power generation, realizing waste resource utilization and saving energy. Therefore, incineration of waste is an effective treatment which is harmlessness and recycling [1]. With the development of society, people's environmental awareness has been continuously improved, and comprehensive utilization technologies such as heat recovery have been improved. The proportion of household waste treatment technology using incineration technology is increasing year by year [2-4].

A large number of municipal solid waste (MSW) incineration power generation plants appear, and it will cause serious environmental pollution when cracks appear in waste bunkers. The safety and applicability of the MSW bunkers are of great concern. So severe requirements should be put forward in the design with influence of temperature considered. Preventing cracks in the MSW incinerator under the action of temperature and propose improvement measures to ensure safety is an important research content.

As shown in Fig. 1, the size of the MSW bunker model which is cast in the field using C40 reinforced concrete is 36 m ×18 m × 8 m, and the wall thickness is 0.4 m. The bunker model is surrounded by medium hard soil with the size 180 m × 60 m × 24 m. The elastic modulus of soil is 600 MPa, the density is 2000 kg/m3, the Poisson’s ratio is 0.25, and the thermal expansion coefficient is 5×10-7. The model of soil layer is shown in Fig. 1(b). The bunker is embedded in the soil for 3 meters. A seam element is connected between the incinerator and the soil layer, and there is only pressure between them. 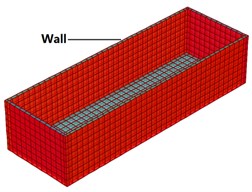 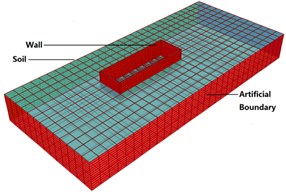 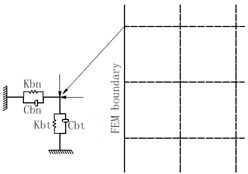 The tangential and normal damping coefficients and spring stiffness of the artificial boundary are given by [8].

where is the known incident wave field, is the stress generated by the displacement in the original continuum, and and correspond to the damping , and stiffness , in Eqs. (1) to (2).

According to the seasonal statistics of the region where the plant is located, the temperature rises about 21 °C in summer and the temperature drops about 19 °C in winter.

4.1. Temperature rising in the summer

The Fig. 3 shows the stress contour of the waste bunker when the temperature rises by 21 °C. It can be seen that the stress along the wall of the incinerator is the compressive stress in the subterranean part and the maximum value is 3.75 MPa. The stress in the part above ground level is the tensile stress and the maximum is 1.58 MPa, which is mainly because thermal expansion and contraction of the concrete is subjected to the confinement of the surrounding soil. Therefore, the subterranean part of the bunker is under pressure while the part above ground level is under tensile. The maximum normal stress along the bunker wall appears at the four corners of the subterranean part, the maximum value is about 2.44 MPa (compressive stress). The maximum stress along the vertical direction of the bunker wall appears at the surface of soil layer, the maximum value is about 1.70 MPa (tensile stress).

Fig. 3. Stress of the bunker during the process of temperature rising in the summer. 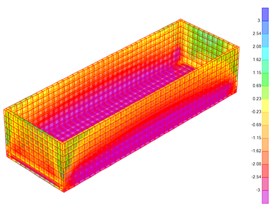 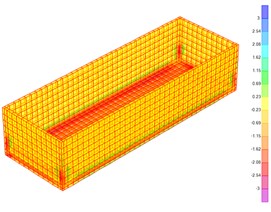 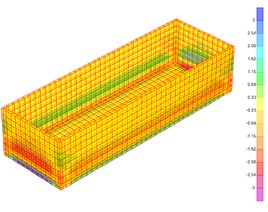 4.2. Temperature dropping in the winter

Fig. 4. Stress of the bunker during the process of temperature rising in the winter 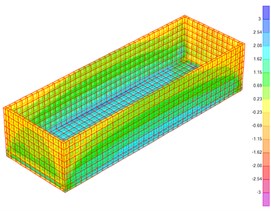 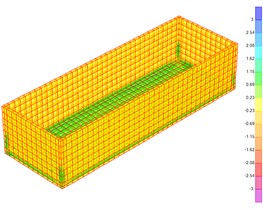 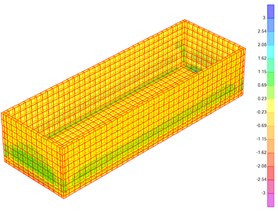 Similar to the temperature rise condition, the parts with large stress in the MSW bunker are concentrated at the ground level. On the contrary, the MSW bunker in the subterranean part is under tensile. At the bottom edge of the transverse bunker wall appears large stress in direction along the longitude side which indicates that these regions need to be strengthened.

The maximum value of stress is shown in Table 1 for above two cases. It can be seen that the influence of temperature on the MSW incinerator cannot be ignored.

At present, post-casting belt is often used as an effective measure to solve the problem of cracking for the ultra-long structures. Although the post-casting belt can prevent cracks caused by creeping of concrete, it does not prevent temperature cracks. It will also affect the construction period. Therefore, in the past decade, construction has been more inclined to use expansion concrete to prevent cracks. Expanded concrete is not only inexpensive, but also easy to construct. Because of its good seismic performance, expanded concrete is popular around world [9].

The design idea of the expansive concrete is to use the expansion effect of the compensating shrinkage concrete during the entire hardening process, because the steel bar is restrained by the adjacent position, thereby establishing a small amount of pre-compression stress in the structure. For the sake of structural safety, the expansion should not be too large. According to the research, when the expansion ratio is 2-3×10-4 and the reinforcement ratio is 0.2-0.8 %, the pre-stress of 0.2-0.7 MPa can be established in the structure.

Fig. 5. Layout of the belt and stress at the bottom surface of the bunker

b) Layout of the belt

c) Stress at the bottom surface

By analyzing the temperature stress of the MSW incinerator model, it can be found that:

1) The existence of the surrounding soil layer will affect the stress distribution of bunker, mainly at the bottom surface and the portion at ground level.

2) Due to the thermal expansion and contraction, the MSW bunker is pressed during the heating process, which is safe; in the process of cooling, there will be excessive tensile stress at the bottom surface, and reinforcement measures need to be considered.

3) Applying an expansion reinforcing belt to the region with large tensile stress can effectively reduce the maximum tensile stress.