Copyright © 2019 Shungen Xiao, et al. This is an open access article distributed under the Creative Commons Attribution License, which permits unrestricted use, distribution, and reproduction in any medium, provided the original work is properly cited.

Aiming at the problem of weak signal signature recognition of gear faults, a gear fault diagnosis method based on lifting wavelet packet and combined optimization BP neural network is proposed. The initial non-sampling prediction and update operators are calculated by Lagrange interpolation subdivision based on the principle of lifting wavelet, and the adaptive redundancy lifting wavelet packet decomposition and reconstruction algorithm is constructed. The network parameters of the number of hidden layers and the quantity of nodes, initial weights and thresholds of BP neural network are optimized by genetic algorithm (GA). The Levenberg-Marquardt (LM) algorithm is used to improve the search space of the network. Through experimental analysis, the results show that the gear fault diagnosis method proposed in this paper not only has high diagnostic accuracy, but also increase efficiency. 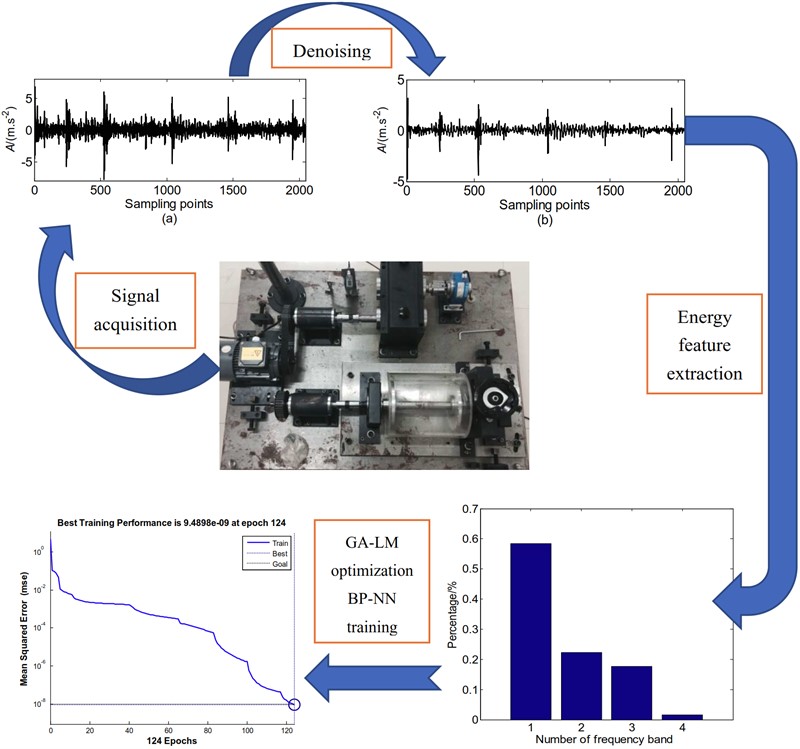 The gear is the most important connection and transmission component in the mechanical equipment. If the fault of the gear in the transmission process is found in time, the maintenance and repair time of the equipment can be arranged economically and reasonably to avoid accidents. How to effectively extract the fault features hidden in the gears to achieve efficient and accurate fault classification as well as diagnosis is a hot and difficult problem for current researchers. In order to overcome the problems of slow convergence and falling into local minimum of traditional BP-NN, Wu [1] uses Genetic Algorithm (GA) to optimize the initial weight of BP-NN, and uses GA global search ability to effectively avoid BP- NN is caught in a local minimum problem; Zhang [2] proposed a fault diagnosis of the fan gearbox based on genetic algorithm optimization BP neural network, which effectively diagnoses the gearbox fault diagnosis. However, because GA only optimizes the initial weight of BP-NN to speed up the determination of the search space, the basic BP algorithm is still used in the local optimization process in the search space. Obviously, it still fails to change the slow convergence of BP-NN.

SWELDENS [3] first proposed the wavelet transform theory of the lifting mode. The decomposition process consists of three steps: segmentation, prediction and update. Since the traditional lifting wavelet or wavelet packet transform is a transform method based on sampling operation, it is easy to cause information component loss and frequency aliasing problem. The non-sampling lifting wavelet packet algorithm proposed in [4-6] effectively solves this problem.

Compared with the traditional lifting wavelet packet decomposition process, the non-sampling lifting wavelet packet removes the segmentation link and performs the operation in a non-sampling manner. Let be the first frequency band signal of the original signal decomposed in the s layer. Each sample of the upper layer signal is predicted by the adjacent sample signals by the non-sampling predictor , and the predicted difference is the high-frequency detail signal , such as Eq. (2). The low-frequency approximation signal is obtained by updating the detail signal by the non-sampling prediction operator , as given by Eq. (3):

The non-sampling lifting wavelet packet reconstruction algorithm is the inverse operation of the above decomposition algorithm, which consists of a recovery update link, a recovery prediction link and a merge link. The recovery update is performed by the signals and to complete the recovery of the sample sequence , as shown in the Eq. (4). The recovery prediction link is recovered by the signal and the completed sample sequence , as shown in Eq. (5). The merged link is obtained by averaging the signal and adding, is given us by Eq. (6), and the result is the non-sampling lifting wavelet packet reconstructed signal :

3. Optimize BP-NN using the combination of GA- and LM-based approach

GA is a global probability search algorithm which is derived from the population search strategy and information exchange between population individuals. It is independent of the information of BP neural network using nonlinear optimization gradient descent method [8]. It can optimize BP-NN by using this algorithm. The topology and network parameters improve the convergence speed of the network. LM is an algorithm that combines the descending gradient method and the Newton method to further improve the network optimization efficiency and avoid local minimum problems. Based on GA and LM are combined to perform BP-NN together to provide more accurate diagnosis results for gear failure.

3.1. GA optimizes the topology and network parameters of BP-NN

GA optimizes the topology and network parameters of BP-NN as follows:

Step 5: Calculate the fitness value according to Eq. (7), and select a plurality of individuals with large fitness values to form a male parent.

Step 7: Repeat steps Step 2-Step 6 until an individual in the group can meet the network requirements.

The LM algorithm applies the approximate second-order derivative information, which is a combination of the descending gradient algorithm and the Gauss-Newton algorithm. It has the local characteristics of Newton’s method, can generate an ideal search direction near the optimal value, and has the global characteristics of the gradient method. That is, the steps that just started the iteration drop faster. Therefore, the convergence rate is faster and more stable than the falling gradient algorithm [9]. The expression of the iteration of the LM algorithm is:

where is the vector of the weight and threshold of the th iteration, is the error of the th network node, is the identity matrix, is called the Jacobian matrix, is one greater than zero adaptive adjustment factor.

The hardware involved in the experimental device mainly includes QPZZ-II rotating mechanical vibration analysis and fault diagnosis test platform system, one signal conditioning instrument, two data collectors, and several acceleration sensors. The schematic diagram of the experimental platform in Fig. 1. The pinion of the experimental platform is a driving wheel, which relates to the motor shaft. the large gear is a driven wheel, and is connected to the magnetic powder brake through a coupling. The number of teeth of the pinion gear is 55, and the number of teeth of the large gear is 75. The two accelerometers are installed in the horizontal and vertical directions at the large gear on the outer side of the gearbox. The calibration values of the two sensors are 102 mV/g and 99 mV/g, respectively. The measuring point arrangement as shown in Fig. 2. 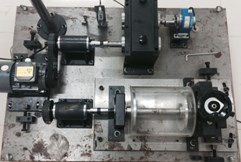 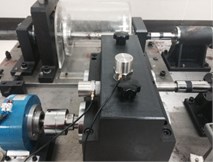 Based on obtaining four kinds of vibration signals: normal signal, gear broken tooth, gear crack and wear, the method proposed in this paper is used to realize the diagnosis of various gear fault types. The specific diagnosis steps are as follows:

(2) Calculate the energy characteristics of the signals of each frequency band decomposed by the wavelet packet and normalize them. Fig. 4 is the energy spectrum of the broken teeth.

The input sample of BP-NN is the fault energy characteristic vector of the gear, and the output is of four fault types: no fault (1,0,0,0), gear tooth breaking fault (0,1,0,0), gear surface Crack failure (0,0,1,0), gear wear (0,0,0,1). Therefore, there are 8 nodes in the input layer and 4 nodes in the output layer. Set the population number to 50, the maximum running algebra to 100, and the generation gap to 0.9. The error reduction curve of the optimization process is in Fig. 5. After the topology of the neural network is established, the initial weight and threshold parameters of the GA optimization network are continuously used. Fig. 6 is the error reduction curve, the error square curve and the fitness curve of the parameter optimization process. 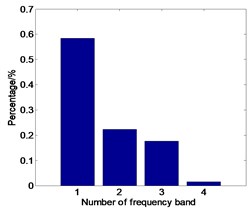 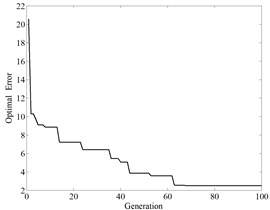 a) Error sum of squares curve

(4) Using LM algorithm to improve the efficiency of BP-NN search target, set the transfer function of hidden layer and output layer to tansig and purelin respectively, and the minimum mean square error index is set to 10-5. 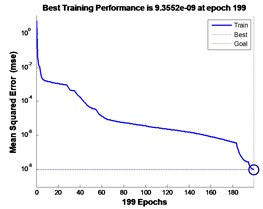 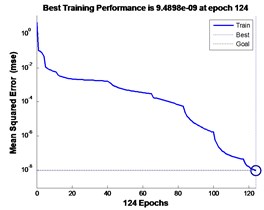