Copyright © 2021 Xiaobo Zhang. This is an open access article distributed under the Creative Commons Attribution License, which permits unrestricted use, distribution, and reproduction in any medium, provided the original work is properly cited.

In connection with the complex operating conditions of gearbox, multiple vibration excitation sources, and difficulty in extracting vibration signal fault features, a novel method of gearbox fault diagnosis is proposed. based on the fusion of EEMD and improved Elman neural network (Elman-NN) is developed. The wavelet packet is utilized to denoise the collected vibration signals of four different types of gearboxes: broken teeth, cracks, wear, and normal, and then use the EEMD method to decompose the denoised vibration signals, and use the correlation coefficient criterion means to carry out the IMF pseudo component elimination, and then get a more effective signal. Calculate the energy feature of the effective signal and use it as the enter feature of the Elman-NN. Based on standard Elman-NN, a self-feedback factor is added to construct a reformed Elman-NN. Experimental results indicate that compared with the standardized Elman-NN, the improved Elman-NN has higher diagnostic accuracy and diagnostic efficiency. 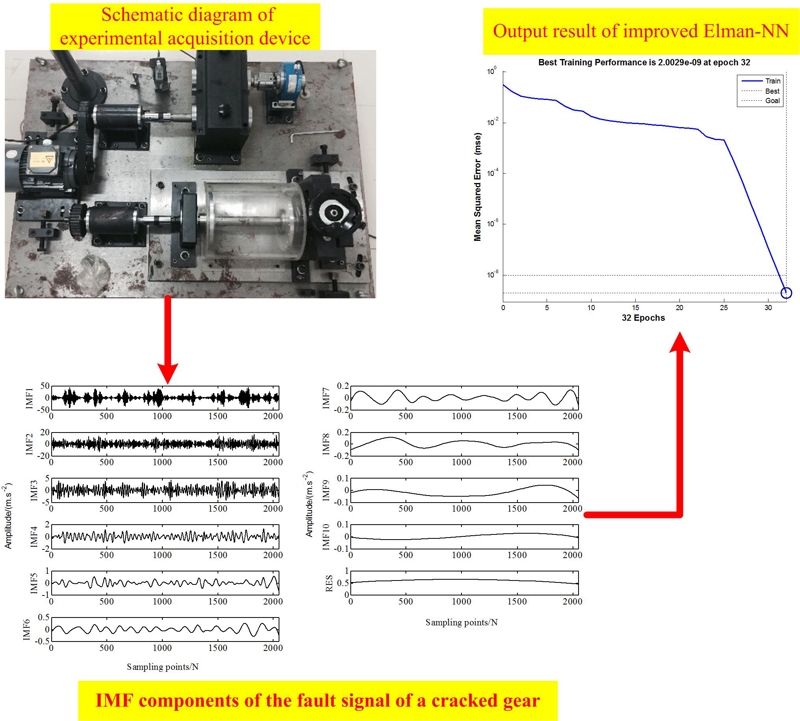 As the core component of mechanical transmission system, gearbox is widely used in various mechanical equipment [1]. Because the working environment of the gearbox is usually more complicated, long-term operation, coupled with the influence of various factors such as temperature and lubrication, the gears of gearbox are prone to pitting, broken teeth, and wear failures, and the gearbox bearings are prone to failures such as wear and bending. If the abnormality cannot be detected in time, long-term operation will cause damage or abnormal accumulation gradually, causing irreversible consequences. Therefore, it is necessary to monitor the status of the gearbox in real time, accurately determine the type and location of the fault, and maintain it in time to achieve the goal of minimizing the expected loss.

The empirical mode decomposition (EMD) method is a new time-frequency analysis method proposed by Huang, and it is an adaptive time-frequency localization analysis method [2]. EMD is superior to the Fourier transform method, yet the more important disadvantage of EMD is modal aliasing. In order to solve this problem better, Huang also proposed an improved EMD method, namely EEMD (Ensemble Empirical Mode Decomposition) method [3]. Because the gear fault signal is nonlinear and non-stationary, and the Elman-NN has strong nonlinear mapping and fault tolerance, it is especially suitable for nonlinear pattern recognition and classification, so it is introduced into fault diagnosis. Ayodeji [4] introduced an Elman-NN to perform nuclear power plant fault diagnosis, and the results show that the diagnosis method is feasible. Chemseddine [5] proposed a novel fault diagnosis method for gearbox system based on the fusion of HEWT-SVD and Elman-NN. The results show that the diagnostic performance of this method is better than (HHT)-SVD, (LMD)-SVD and (WPT)-PCA methods. Baraldi [6] developed a fault diagnosis method based on Auto-Associative Kernel Regression, Fuzzy Similarity and Elman Recurrent NN. This combined method can overcome the limitations of these three independent methods. Considering that the standard Elman-NN can only identify the first-order dynamic model, as the hidden layer or the order of the system increases, its dynamic memory and association capabilities are significantly weaker. Based on the advantages of the EEMD method and the shortcomings of the standard Elman-NN, this paper puts forward a gearbox fault diagnosis means based on the fusion of EEMD and the improved Elman-NN.

2. Extraction of effective IMF components based on EEMD method

3. The improved algorithm of Elman-NN

Elman-NN is a feedback neural network (NN), a typical localized regression network, a forward NN which is provided with localized memory units and localized feedback connections. The standardized Elman-NN uses the BP algorithm, which can only identify first-order dynamic models. When the hidden layer or the order of the system increases, its dynamic memory and association capabilities are limited. To this end, this paper uses a reformed Elman-NN to analyze and diagnose multiple failure modes of asynchronous motor rolling bearings. The improved Elman-NN adds a self-feedback factor ([0, 1]) on the basis of the standard network. That is, mutual feedback and self-feedback are introduced between nodes in the same layer of feedforward network, which makes this network better achieve the recognition of non-linear mapping pattern, while the self-feedback link of correlated nodes also largely streamlines the network scale and improves the learning speed. The structure of improved Elman-NN structure is shown in Fig. 1. When is close to 1, it indicates that it can contain more distant info. When is equal to 0, this reformed Elman-NN degenerates into a standardized Elman-NN.

Eq. (4) is used to obtain partial derivatives of , , and and set them to 0. Finally, the learning algorithm which belongs to the reformed Elman-NN is obtained:

Fig. 1. The improved structure of Elman-NN 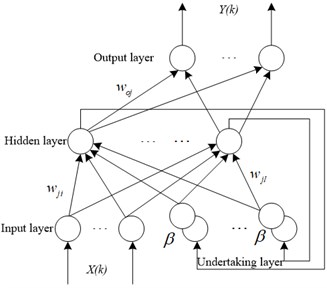 4.1. The collection of experiment data

The experiment device is shown in Fig. 2(a). The included hardware mainly includes the QPZZ-II fault diagnosis test platform system, several acceleration sensors, two data collectors, and one signal conditioner. The small gear of this experiment platform is the driving wheel, which the motor shaft is connected to; the big gear is the driven wheel, which the magnetic powder brake is connected to through a coupling. Paste a circle of black tape on the driving shaft (leaving a slit of about 2 mm to reflect light), and use an infrared speedometer to measure the shaft speed. The number of teeth of the pinion is 55; the number of teeth of the big gear is 75. And two acceleration sensors are respectively installed in vertical and horizontal directions of the big gear outside the gearbox. The calibration values of these two sensors are respectively 99 mV/g and 102 mV/g. The layout of measuring point is shown in Fig. 2(b).

A dual-channel data collector is used to collect normal signals and three typical fault signals of cracks, broken teeth and wear. To ensure that enough data samples are collected, the sampling frequency must be 2.56 or more times of the analysis frequency. 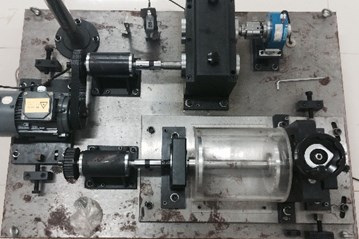 a) Schematic diagram of experimental platform 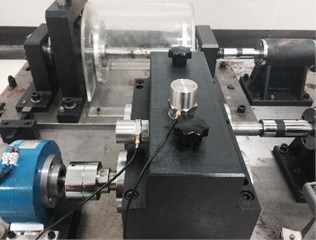 Fig. 3. IMF components of the fault signal of a cracked gear 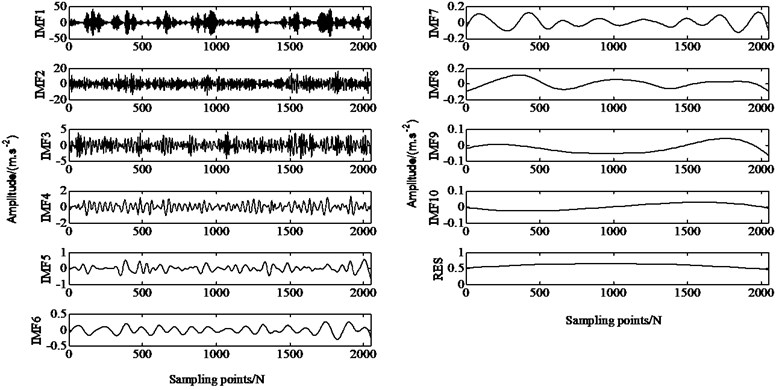 4.3. The extraction of energy feature

When the system is excited, the generated vibration signal will modulate the amplitude or frequency of some components, causing the energy of the signal to change. Therefore, the energy change of each component reflects the fault condition of the gear, and the energy of every component is normalized as the input of the network. The data samples of the normalized vector of energy failure characteristics of different gear failure types are shown in Table 1. Due to space reasons, only 5 sets of training sample data for different failure types are given. In the actual analysis, the sample data used is 100 sets, each set of data includes 4 energy characteristic values of different frequency bands.

4.4. The analysis of diagnosis result 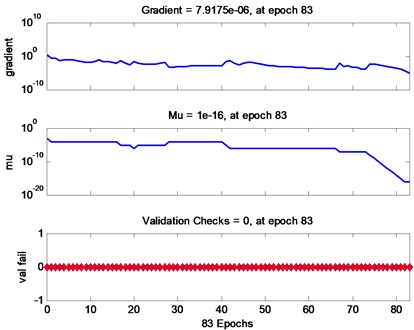 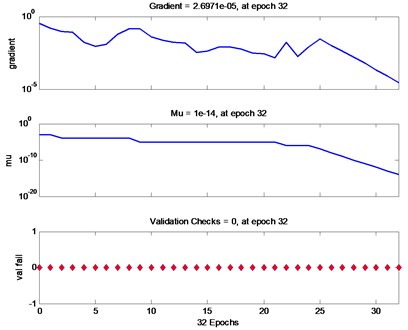 In this work, in order to more efficiently and accurately identify broken teeth, cracks, wear and normal gear conditions involved in the gearbox, a fault diagnosis method based on the fusion of EEMD and improved Elman-NN is introduced. Through the EEMD decomposition of gear vibration signals of different types of failures, the correlation coefficient criterion method is utilized to implement effective IMF component screening, to obtain more pure vibration information. In order to build the Elman-NN with faster learning speed, I add a feedback factor to the standardized Elman-NN to make the network realize the pattern recognition of nonlinear mapping better. And to a large extent, the self-feedback connection of the correlated nodes simplifies the scale of the network. Therefore, the learning speed of the network is improved. The analysis results of experiment indicate the improved Elman-NN diagnosis system has the characteristics of higher accuracy and shorter diagnosis time.