Copyright © 2019 Sai Manoj Katakam, et al. This is an open access article distributed under the Creative Commons Attribution License, which permits unrestricted use, distribution, and reproduction in any medium, provided the original work is properly cited.

Solar energy is a non-conventional source of energy. Solar panels generate electrical output by absorbing solar radiation. The performance of photovoltaic (PV) module often depends on environmental factors like dust, humidity, hail and temperature. Installation elements like altitude, installation site, tilt angle also affects the efficiency of solar energy output. The objective of this research work is to clean the dust deposited on PV panels using the minimum amount of water and energy. To regularly clean the dust, a semi-automatic self-cleaning mechanism has been designed and fabricated, which cleans the deposited dust on the solar panel automatically. Therefore, the process turns out to be reliable and faster and it leads to increased power output of the solar panels. An experimental investigation has been done at Bennett University, Greater Noida dated 15 October to 21st October 2019. An increase in efficiency by 1.2 % to 3 % was reported in this experimental study.

The world is conscious about energy crisis problem and it’s time to implement other alternative mechanisms for obtaining safe and efficient energy. Jacbson et al. [1] One option is to use of renewable resources energy especially solar energy that plays a key role in society. This sustainable energy resource can help to reduce worldwide energy insecurity.

Deepak et al. [2] Solar photovoltaic panels have the ability to absorb the sunlight as a source of energy to generate electricity or heat. And it is designed in such a way that maximum output has to be obtained whether it is used to generate electricity or any other purpose. Paudyal et al. [3] The energy generated by solar photovoltaic modules is related to the solar irradiance and sun’s spectral content, as well as other factors like environmental, climatic, component performance and inherent system.

Chen et al. [4] proposed an alternative approach to evaluate the cleaning efficiency of dust particles. Brush on disk apparatus was used with polymetric tip made of polyoxymethylene sweeping on a glass substrate. applied loads and the relative humidity affected cleaning efficiency considerably. Kawamoto H. [5] found a novel method of dust removal from soiled solar panels using electrostatic cleaning equipment. High AC voltage applied on a solar panel forces the dust particles downwards due to gravitational force. the limitation of the system is that it’s not fully automatic and needs a robotic system. Parrott et al. [6] improved the cleaning efficiency of PV system by 0.25 % per day by using robotic cleaning method. The robotic system consisting of silicone rubber foam brush minimized the effect of dust on the PV panels and increased the power output. This method was cheap and did not damage the solar panels. Vasiljev et al. [7] developed the system for ultrasonic cleaning action method is used to infiltrate the small cracks and hard-to-reach surfaces; penetrating areas normally inaccessible to other cleaning methods. Lu et al. [8] in this method linear piezoelectric actuator are used to clean the PV modules with the help of wipers attached to the actuator. This system was compact sized and light weight. Du et al. [9] designed a special nozzle to remove dust on the PV module. A multi-stage expansion nozzle used in different climatic conditions was designed. Chesnutt et al. [10] designed an electrodynamic dust shield (EDS) to lift and transport dust particles via electrodynamic waves generated by electrodes on the panel surface. Deb et al. [11] developed an automated water free cleaning system to remove dust over the solar panels and also compared the energy captured. Assi et al. [12] developed wide availability of air conditioners, using air flow from the fan of air-conditioners to force the flow the dust on solar panels and also implemented this technique in various countries and widely applied in United Arab Emirates (UAE). Park et al. [13] developed a passive method of cleaning the PV module. A superhydrophobic panel was designed in such a way that Rain and water accumulated due to atmospheric condensation settle in the micro depressions present in the glass surface where they attract particulate matter. The water quickly evaporates, leaving residues that need to be removed. Nano-hydrophobic layer fills in the micro-depressions and provide a smooth glass surface that prevents the holding of water. Demenkova et al. [14] proposed a control system with sun tracing algorithms. Algorithms us tested on moving solar panels and also finds the effectiveness of the PV module. Moharram et al. [15] in this method compared using non-pressurized water and surfactants and finds surfactants is more useful and efficient. Pan et al. [16] proved that difference between the bare glass and nano-micro structured coating on the PV module and shows how nano micro structured coating glass achieves the highest transmittance rate after dust deposition. Saidan et al. [17] study found that in desert area due dust accumulation shows negative impact on PV modules and decreases the efficiency. Sivan et al. [18] proposed automatic self-cleaning mechanism using elements like light dependent resister (LDR) sensors, sprayers and wipers unit works depending upon solar output.

In this research paper an effort has been done to increase the maximum electrical energy of PV module. To address this need for a cleaning mechanism a semi-automatic self-cleaning mechanism has been developed for solar panels. This device will boost the efficiency by increasing the energy output of solar panels quickly and it is cost-effective.

The four photovoltaic (PV) modules have been mounted size (196 × 99 × 3.5 cm each PV module has 72 solar cells) on the cast-iron frame. Further, nozzles of diameter 6 mm and 12 in number have been attached at the top of PV modules. And material of nozzle made up of brass metal. The photographs of the experimental setup are presented in Fig. 2(a). And time switch is attached to the solar inverter Fig. 2(b), triggers as per time set (Generally 2 hrs), and turns on the AC motor pump of 0.5 HP is also attached to the system and it lifts the water from the water tank and water enters into nozzles. From the nozzles water is sprayed on the PV module glass as of its water flows on the glass then dust and dirt particles are removed and it helps to increase in electrical efficiency of the PV module drops. Said et al. [19]. The specification of various equipment's is specified in Table 1.

3. Analysis of the photovoltaic module system

The expression of electrical efficiency of PV system is as follows:

The expression to calculate Fill Factor is as follows:

This study has been carried out at roof top, Block A, Bennett University, Greater Noida, India from 15-10-2019 to 21-10-2019. The equipment solarimeter has been used to measure the solar irradiance (Fig. 3). The solar irradiances have been noted to be maximum at around 2 pm and its value has been found to be 1620 W/m2. Shows the average solar irradiance over the study period. 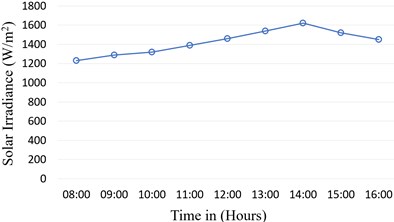 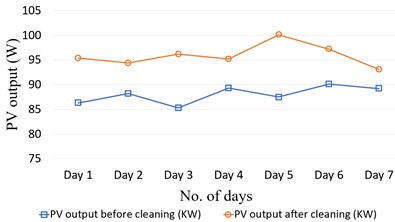 In this research work an experimental set up has been set up to study the effects of cleaning glass of PV module in order to improve the performance of PV panels. The following conclusions have been made from this investigation:

2) It was reported that total solar radiation increases from morning to afternoon and further it drops.

3) This cleaning mechanism increases power generation gives a cleaned surface after operation in an easy way and in less time and effort. the efficiency of PV panels was found to increase from 1.2 % to 3 %.