Fatigue analysis of injector body based on ANSYS workbench

Copyright © 2020 Miao Wu, et al. This is an open access article distributed under the Creative Commons Attribution License, which permits unrestricted use, distribution, and reproduction in any medium, provided the original work is properly cited.

The injector body has one fuel inlet. The fuel enters the oil chamber after passing through the oil inlet. After that the fuel divided into three parts flowing into three split ports. A physical model of the injector body is shown in Fig. 1.

The three-dimensional model of injector body is imported into ANSYS Workbench and is meshed, choosing another size for each part and the generation of face mesh with refinement on contact surface, the generated mesh is shown in Fig. 2. The statistical result is that the number of nodes is 341,962, and the number of elements is 231,381. The average elements quality is 0.79, and it is higher than 0.7; that proves that the quality of the elements is good. 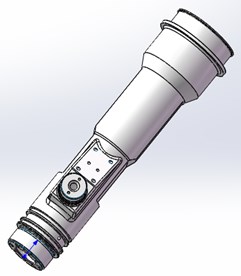 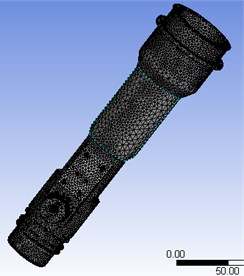 Due to a high demand to fatigue strength of the fuel injector body, the material of injector body is proposed to be 20Cr steel, which has excellent processing properties. This grade of steel has high hardenability and wear-resistant surface after carburizing and quenching [3]. And the steel becomes mostly not prone to deformation after quenching. Some physical properties of 20Cr steel are shown in Table 1.

In order to get the fatigue life, it is also required to provide a S-N curve of 20Cr steel, according to experiment [4], and this S-N curve is shown in Fig. 3. 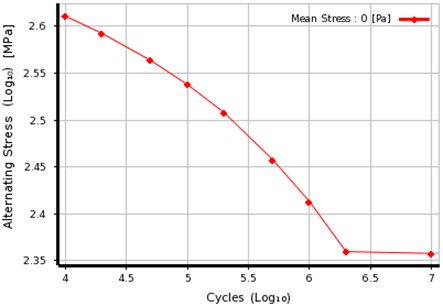 The S-N curve is a material fatigue curve which indicates the relationship between number of stress cycles and figure limit. The stress after cycles, the maximum stress cannot make the fatigue failure to the material which called as fatigue limit stress. The figure curve can be divided into two parts: one is the finite life region and the other is the infinite life region. The finite life region means that when the strain level of the components is lower or equal to the fatigue limit, the stress cycles can exceed that means the components will not have fatigue damage.

The relationship between the variable stress and cycle number under the stress which will lead to the fatigue damage is as follows:

This equation is called as fatigue curve equation, where is the fatigue limit stress of under the finite region; where N is the cycle number fit the , m is the index related to the material, is the constant from experiments.

Fatigue Tool is used in ANSYS Workbench to simulate the fatigue strength of the injector body under the maximum stress. The stress concentration parts will be discussed carefully. The fatigue life of the entrances of three split ports should be discussed separately, but the partial detail figure of fatigue life is shown in Fig. 5.

The figure shows that the minimum cycle number, which exists at the entrances of split ports, is 2487. Because the fuel loads and unloads instantly, and this always happens only during the startup of the diesel engine’s operation, the cycle number 2487 can meet the requirement. However, in order to increase the fatigue life and extend the using time, it is required to reduce the maximum stress of the stress concentration. 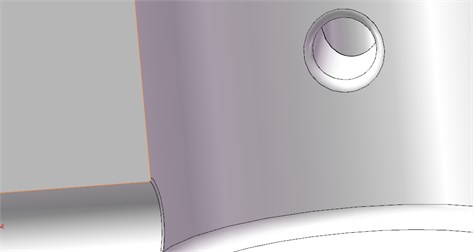 One of the methods to reduce the stress concentration consist in creating a fillet at the entrances of split ports [6], which will make the fuel inside the injector body flows more gently. So, the maximum value of stress can be reduced. This is a new method to reduce the stress concentration of the injector body. The model of the modified structure is shown in Fig. 6.

Take the radius of fillet is 0.4 mm as an example, after creating fillets, the analysis results are shown in Fig. 7.

As shown in the figure, after creating the fillets, the stress concentration is also available, but the maximum value of stress declines obviously, and the fatigue strength is also increasing.

Table 2. Stress and fatigue life with different radiuses of fillets

Fig. 8. Relationship between radius of circular beads and stress, and fatigue life 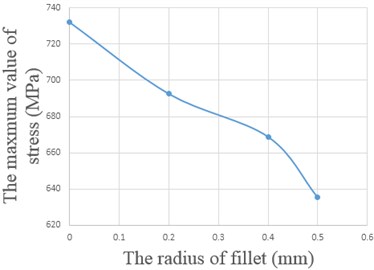 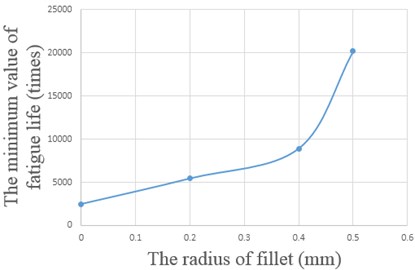 The authors gratefully acknowledge the support from the National Natural Science Foundation of China (Grant No. 51574161).