Study on anisotropic characteristics of dynamic deformation parameters of phyllite

Copyright © 2020 Fu’an Si, et al. This is an open access article distributed under the Creative Commons Attribution License, which permits unrestricted use, distribution, and reproduction in any medium, provided the original work is properly cited.

At present, many scholars have done a lot of research on rock acoustics. Within a certain range, the degree of shear wave anisotropy of the medium increases with the density and width of the crack Chu and Zhang [1]. Zheng et al. [2] discovered that the wave velocity-stress curve increases linearly during the elastic loading stage of granite and gneiss. Nakagawa et al [3] found that the wave velocity and attenuation coefficient are quite different for CO2 flooding and brine re-displacement under the same conditions. Kurtulus et al. [4] found that the wave velocity of the acoustic wave containing the joint plane rock is significantly attenuated, and the rock sample with random joints is attenuated more than the parallel joint rock sample. Wei et al. [5] found that the torsional transverse wave with no polarization direction propagates at two different speeds in anisotropic media, and the splitting phenomenon occurs. Zhang et al. [6] gives the relationship between wavelength, elastic modulus and elastic wave velocity including detail structure scale, phase boundary scale, phase interface state and so on. Wong et al. [7] found that the values obtained by the static compression test are smaller than those obtained by the ultrasonic test and the in-situ log, and the values of the parameters obtained by the three methods are discussed, and the reasons for the difference in the parameter values are analyzed. Inigo et al. [8] studied the wave velocity variation of granite materials under freeze-thaw cycles. Renaud et al. [9] changed the propagation velocity of ultrasonic pulses in dry Berea sandstone, the change of dynamic elastic mode of the sample is measured, which provides relevant evidence for hysteresis nonlinearity under low dynamic strain conditions. Cerrillo et al. [10] used ultrasonic technology to estimate the physical and mechanical properties of granite, the linear statistical correlation between acoustic parameters and rock physical and mechanical properties is obtained. Fort et al. [11] Ultrasonic nondestructive testing was used to test the longitudinal wave velocity and porosity of granite in cultural sites. Song et al. [12] obtained dynamic elastic modulus of rock by the acoustic wave velocity test of layered rock. With the increase of confining pressure, both the longitudinal wave velocity and the transverse wave velocity increase monotonically, and the dynamic elastic modes of different rock layers are considered. Shi et al. [13, 14] found that the compaction effect of longitudinal wave time difference becomes more obvious with the increase of porosity. Fei et al. [15] combined model of the nonlinear constitutive relation of the rock and the linear tangential constitutive relation and the corresponding stress wave propagation equation of the P-wave oblique incidence joint.

The author selected 35 phyllite samples with a size of Φ50 mm×L100 mm to calculate their density (). The 35 rock samples were divided into 7 groups according to the lamellar plane azimuth () 0°, 30°, 45°, 60°, 75°, 90°, as shown in Fig. 1. First, debug the instrument to get the zero-setting waveform, and select the starting point of the waveform to determine the zero delay () and () of the system. Then, P-wave and S-wave test are performed on each rock sample, the waveform chart is recorded, the jump point is reasonably selected from the waveform chart, and the time P-wave () and S-wave () corresponding to the jump point are recorded. According to the Eq. (1), the P-wave velocity () and the S-wave velocity () are calculated, and the and of each group of rock samples are averaged to obtain the corresponding and :

2.2. Overview of equipment and test principles

This experiment uses the probe produced by Panametrics, USA, the ultrasonic exciter produced by OLYMPUS, the TDS2012C type oscilloscope produced by Tektronix, and the display test system. As shown in Fig. 2. 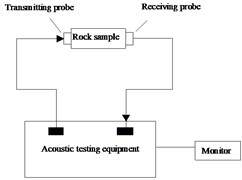 In order to avoid the splitting of the S-wave caused by the polarization angle, and thus affecting the test results, three polarization angles of 0°, 45°, and 90° were selected during the test, as shown in Fig. 3. The S-wave velocity is measured separately to obtain three different , and the three are averaged as the final .

a) The polarization angle is 0°

b) The polarization angle is 45°

c) The polarization angle is 90° 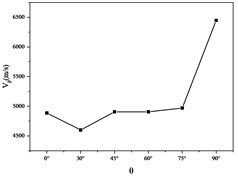 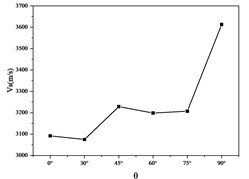 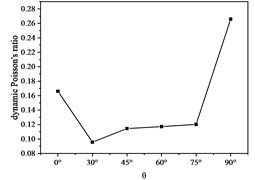 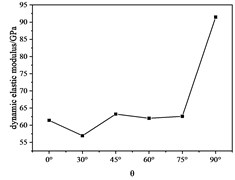 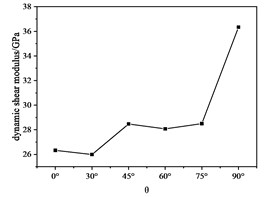 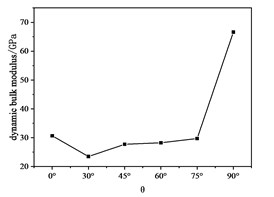 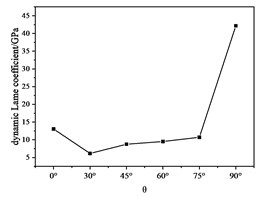 Fig. 9 shows the dynamic bulk modulus as a function of . Similar to previous analysis of other dynamic deformation parameters, the dynamic bulk modulus should be positively correlated with the wave resistance of the P wave. Fig. 10 shows the law of the dynamic pull coefficient with . Here we must first explain the mechanical significance of the Lame coefficient. The physical meaning of the Lame coefficient is the magnitude of the radial stress when the unit axial strain occurs: .

From the law reflected in Fig. 9 and the mechanical significance of the Lame constant, it can be seen that the P wave impedance and the S wave impedance simultaneously affect the moving pull coefficient. 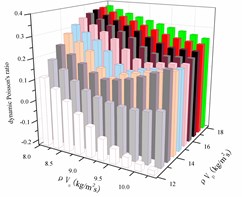 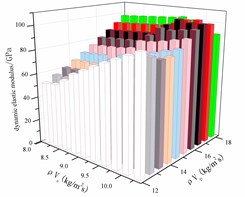 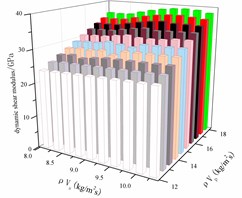 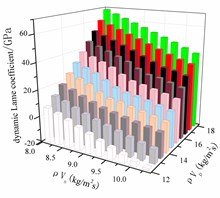 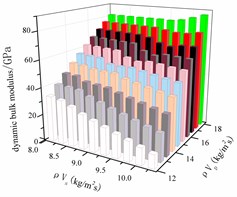