Copyright © 2019 Yongjian Liu, et al. This is an open access article distributed under the Creative Commons Attribution License, which permits unrestricted use, distribution, and reproduction in any medium, provided the original work is properly cited.

A series of dynamic triaxial tests were performed to investigate the dynamic deformation properties of the muck soil, in the Pearl River Delta region of Shenzhen, China, under different consolidation ratios, loading frequencies and cyclic stress with SPAX-2000 triaxial testing system. The results showed that the initial stress-strain hysteresis curve of the muck soil under the low-frequency cyclic loading developed rapidly and the curve shape changes from sparse to tight and to slightly sparse. The cumulative plastic strain of muck soil increased nonlinearly with the dynamic stress amplitude, and there was a critical dynamic stress. As the dynamic stress amplitude reached its critical value, the strain increased sharply and the soil microstructure was destroyed. There was a frequency threshold between 0.25 Hz and 0.5 Hz, and the cumulative plastic strain development mode was from stable model to over-destructive model. The stiffness of the muck decreased gradually, and the plastic deformation increased as the number of cycles increased. Therefore, the lower the loading frequency developed, the greater the plastic deformation would be. The dynamic elastic modulus decreased as the plastic deformation increased, while the dynamic elastic modulus increased as the consolidation stress increased. Moreover, the empirical formulas of dynamic elastic modulus and plastic strain index were established with the consolidation stress ratio as the parameter, and the validity was verified by experimental data. 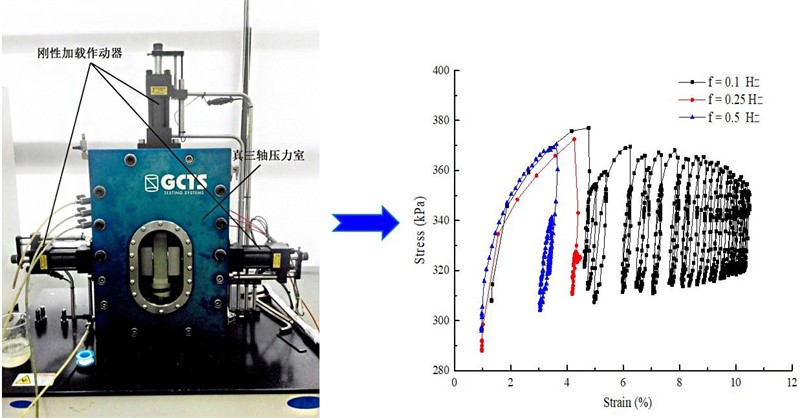 Many valuable test results about dynamic properties of soft soil have been achieved in previous studies [15-23], however, the following problems still exist: (1) Most of the soil samples used in the past research were soft clay with non-high water content, non-strong structure and low-permeability; (2) The loading frequency was mostly greater than 1 Hz, while low-frequency (less than 1 Hz) traffic load research had rarely been reported in previous references; (3) Most of the analysis models of deformation, such as cumulative plastic strain model and softening model did not consider the influence of consolidation stress (the intermediate principal stress); (4) Soft soils have different composition, structural structure and physical properties due to their different formation environments which produces great variation on the properties of dynamic deformation [24, 25].

This paper mainly addressed the second issue. A series of dynamic triaxial tests were performed to investigate the dynamic deformation properties of the muck soil, in the Pearl River Delta region of Shenzhen, China, under the conditions of different consolidation ratios, loading frequencies and cyclic stress with SPAX-2000 real triaxial test system. Based on the data, the empirical formula of dynamic elastic modulus was established. It can provide a theoretical basis for the establishment of the soil constitutive model and the structural dynamic response analysis.

The studied soils were taken from a construction site in Shenzhen which was located in the offshore area of the alluvial plain of the Pearl River estuary. The sampling depth was 14 meters below sea level. The undisturbed muck soils were obtained by the professional thin-walled earth borrowers. The physical and mechanical properties are as follows: the natural density is 1.63 g/cm3, the water content is 65.2 % (The partial samples water content exceed 70 %), the relative density of soil particles is 2.69, the void ratio is 1.72, the plasticity index is 20.9, the liquidity index is 1.06, compression coefficient is 1.43 MPa-1, the cohesion is 7.0 kPa, internal friction angle is 2.1°.

This test focused on three factors on the dynamic deformation characteristics of muck: loading frequency, cyclic stress amplitude and consolidation stress. Table 1 The schemes of the test:

(2) Loading frequency: according to the results of on-site inspection by Zhang et al. [8], the loading frequency of the subway was mostly in the range of 0.4 Hz to 2.6 Hz, the road loading frequency was mainly from 0.2 Hz to 0.5 Hz. There were a lot of research results on cycle frequency greater than 1 Hz. Thus, the load vibration frequencies were selected to be 0.1 Hz, 0.25 Hz, 0.5 Hz, and 1 Hz.

Table 1. The schemes of the test

These tests comprised the following steps:

Step 1: The undisturbed muck soils were prepared for some rectangular parallelepiped specimens of 50 mm×50 mm×120 mm, put into vacuum saturation for 48 hours, and charged into a pressure chamber for back pressure saturation to ensure saturation of not less than 95 %.

Step 2: The soil specimen was consolidated under a certain consolidation pressure.

Step 3: When the drain valve closed, the static biasing stress was applied to the specimen by controlling the upper pressure plate. The sinusoidal wave loading was applied to perform the undrained shear test, and the axial deformation of the sample was up to 15 %. The maximum number of loadings was 5000 times.

If the specimens were not broken after the set number of cycles, the shear stress would be on the specimen with the shear rate of 0.01 %/min until it was broken. Then the test was finished. 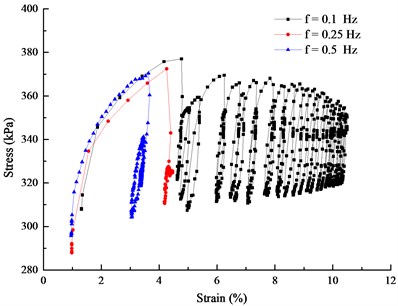 As shown in Fig. 2, the development patterns of muck soil hysteresis curves are similar under the same consolidation pressure, cyclic stress amplitude and different loading frequency cyclic loading. The initial stress-strain hysteresis curve of the muck under the low-frequency cyclic loading developed rapidly. Its curve shape change from sparse to tight and then change to slightly sparse. The higher the frequency developed, the earlier the tight phase would be and the hysteresis loop would be closer. Results show that the shorter the time of the load under the high frequency loading, and the plastic strain development and the loss of energy were limited. Therefore, the area of a single hysteresis loop with a high frequency was relatively small and the degree of closure was higher than the low frequency condition. The energy of the loss increased as the stress amplitude increased, so that the area of the hysteresis loop and the length of the open section increased with the increasing of the stress amplitude under the same cycle frequency and number of times. When the consolidation stress was large, the arrangement of the particles was tight. The hysteresis loop entered the compact phase early, which means the soil entered the elastic phase earlier.

Fig. 3(a) and (b) present the relationship between cumulative plastic strain and number of cycles under the isotropic consolidation, different frequency and the same cyclic stress amplitude ( 20 kPa and 50 kPa). The typical curves of - under the anisobaric consolidation are shown in Fig. 3(c).

As shown in Fig. 3, the following three characteristics are found from - curves. 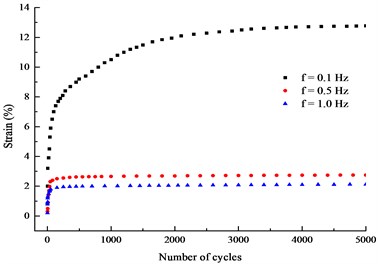 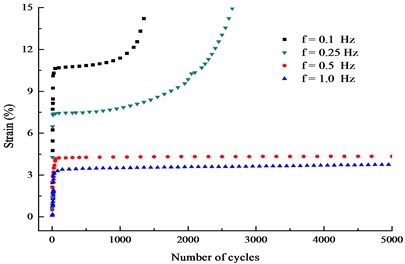 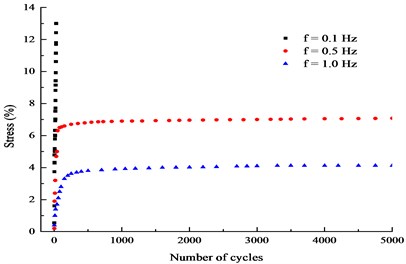 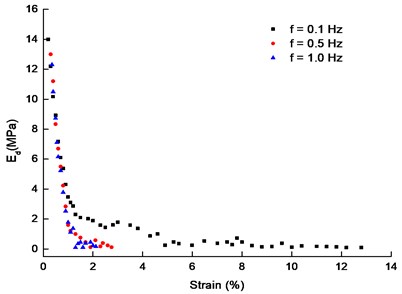 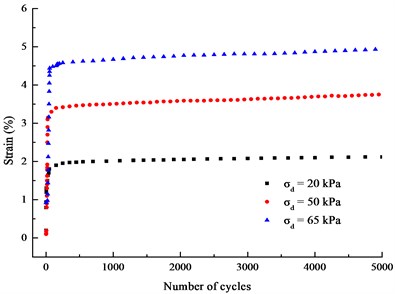 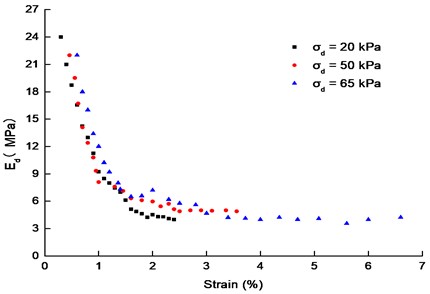 Fig.7 presents the relationship between the cumulative plastic strain and the number of cycles under different intermediate principal stresses for the same loading frequency and stress amplitude. 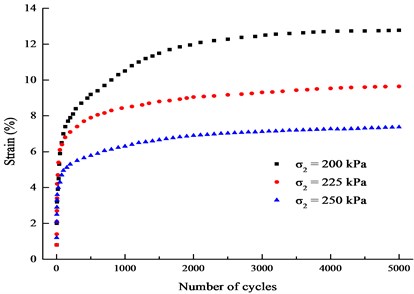 As shown in Fig. 7, the larger the intermediate principal stress developed, the smaller the final value of the cumulative plastic strain at the same cyclic stress and loading frequency would be. This was because the soil structure becomes tight and the stiffness of the muck increased as the consolidation stress increased, the ability to resist elastic deformation become strong. Results showed that under the low-frequency cyclic loading (0.1 Hz-1 Hz), the cyclic stress had no obvious plastic cumulative deformation of the muck, and the frequency influence was more significant. 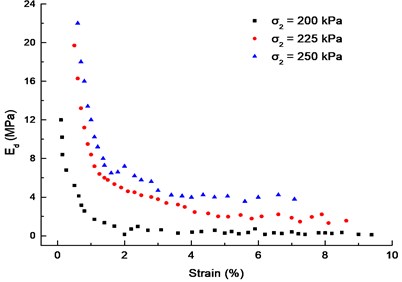 According to experimental data, taking the consolidation ratio as the parameter of model, a dynamic elastic modulus-exponential function relationship model was established. It can be expressed as:

where is the dynamic elastic modulus, is dynamic strain, and is consolidation ratio ( is the ratio of intermediate principal stress to minimum principal stress); , , , and are parameters of model, and is a fitting coefficient.

Fig. 9. The comparison of between experiment results and predicted values 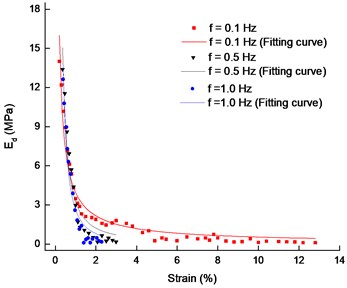 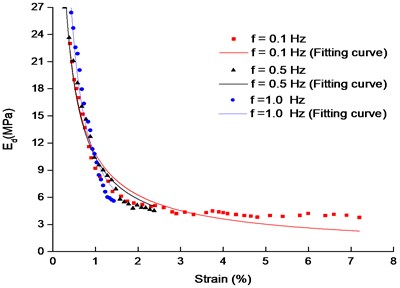 Dynamic triaxial tests under different consolidation ratios, loading frequencies, and cyclic stress amplitudes were performed for 30 specimens of muck soil, and the dynamic deformation characteristics of muck soil under low frequency loading were as follows:

1) The energy of the loss increased as the stress amplitude, thus the area of the hysteresis loop and the length of the open section increase with the stress amplitude under the same cycle frequency and number of times. When the consolidation stress was large, the arrangement of the particles was tight, and the hysteresis loop entered the compact phase early, where the soil entered the elastic phase earlier.

2) The cumulative plastic strain of muck soil increased nonlinearly with the dynamic stress, and there existed a certain critical dynamic stress under the low-frequency cyclic loading. When the dynamic stress amplitude reached a critical value, the strain increased sharply, and the internal structure of the soil was destroyed. There existed a certain frequency threshold between 0.25 Hz and 0.5 Hz, and the cumulative plastic strain becomes failure mode from stability mode. With the increasing of the cyclic vibration, the stiffness of the muck gradually decreased, the plastic deformation produces and accumulates, and the lower the loading frequency, the greater the plastic deformation.