Copyright © 2020 Xiaofei Du, et al. This is an open access article distributed under the Creative Commons Attribution License, which permits unrestricted use, distribution, and reproduction in any medium, provided the original work is properly cited.

The acoustic black hole (ABH) can be utilized to achieve aggregation of flexural wave in structures with the feature that the thickness gradually reduced to zero with a power exponent no less than 2. These characteristics could be applied in vibration reduction, noise attenuation or improving sound insulation. To investigate the sound transmission loss of circular plates embedded with acoustic black hole, series of vibro-acoustic coupling finite element models (FEM) for TL analysis of ABH circular plates were established by automatic matched layer (AML) method in this paper and the simulation results show that the circular plate with a single ABH embedded in the center position can significantly improve the sound transmission loss in stiffness-controlled region, and at the first-order resonance frequency. In the past two decades, the structures embedded with acoustic black hole (ABH) have received wide attention in the application of vibration reduction or noise attenuation, and it also contributes to light-weighting of the structures [1-3]. Above the characteristic frequency of the structure, the ABH can effectively gather the flexural wave in the structure, and while below the characteristic frequency, multiple acoustic black holes are able to improve the low-order modal loss of the structure [4]. Mironov proposed an acoustic black hole pipe structure. By gradually increasing the effective admittance of the pipe along the axial direction, the velocity of the sound wave propagating along the pipe is gradually reduced to zero [5]. Bowyer et al. conducted experimental studies on sound radiation of vibrating rectangular plates containing tapered indentations of power-law profile [6] and found that when a very thin damping material is attached to an acoustic black hole region, the radiated sound power of the structure is reduced by 10 to 18 dB compared with the uniform thickness plate in the frequency range of 1 to 3 kHz [7]. Feurtado experimentally analyzed the influence of the diameter of the damping layer on the radiated sound of rectangular plates with 4×5 array of embedded ABHs in the full frequency range [8]. Then he used experimental and numerical methods to investigate the transmission loss (TL) of plates with embedded ABHs [9] and also calculated the vibro-acoustic coupling properties of the ABH system based on wavenumber transformation method [10].

In this paper, numerical methods were used to analyze the effects of ABH on the sound transmission loss of circular plates. Unlike most other literatures which mainly focus on the responses of ABH structure under point drive excitation, the responses of ABH plates under diffuse sound excitation are represented in this work.

A circular plate embedded with a two-dimensional acoustic black hole is shown in Fig. 1. The equation between the thickness of the circular plate and the radius is given by:

where is a constant number; is the taper power, 2; is the distance between the center of the ABH and the origin of the coordinate in the direction; is the thickness of the uniform region of the plate. The propagation velocity of flexural wave in a thin isotropic plate is:

where is the bending stiffness, ; is the Young’s modulus; is Poisson’s ratio; is the angular frequency; is the areal density of the plate, ; is the density of the plate material. When the flexural wave propagates from the uniform region to the ABH region, the wave velocity will be gradually reduced, the wavelength will be compressed, and the amplitude of the fluctuation will also be gradually increased. As the thickness gradually decreases to zero, the flexural wave propagates here where its cumulative phase reaches infinity, as a result it cannot be reflected back from the center of the ABH region. However, an ideal acoustic black hole cannot be realized in the actual manufacturing due to manufacturing process limitations so that the actual ABH structure must have a truncation. The truncation thickness of the model in Fig. 1 can be expressed as:

With the condition that the fluids on both sides of the plate are the same, the sound transmission loss of the circular plate can be expressed as [11]:

The geometric parameters of the model used for finite element analysis are shown in Table 1. The diameter and thickness of the circular plate is 400 mm and 4 mm, the power index of ABH is 2, the diameter of the ABH region is 60 mm, and the truncation thickness is 0.5 mm.

Fig. 2 shows the FEM model of the ABH circular plate and the vibro-acoustic coupled model for TL analysis. The ABH circular plate is meshed by a tetrahedral mesh, and the mesh size of the uniform region is 2 mm. In order to improve the calculation accuracy, the grid of the ABH region has a basic size of 1 mm and encrypts the mesh in the small curved area with a minimum size of 0.2 mm, thereby ensuring the elements on the smaller surface transition well to the units on adjacent large surfaces. The acoustic model has a size of 0.6×0.6×0.02 m. The calculated frequency has a corresponding relationship with the grid cell size. For the linear finite element model, the side length of the largest cell must be less than 1/6 of the wavelength corresponding to the highest calculated frequency, that is . In this paper, the calculation frequency of the transmission loss is 0-10 kHz, so the cell length of the mesh should not be greater than 5.6 mm. Finally, the mesh size of the acoustic finite element model of this paper is selected as 4 mm. 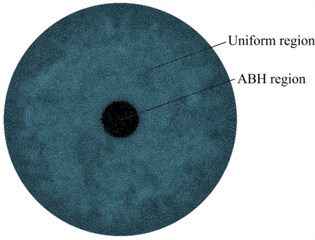 a) Structural model of the ABH plate

The material parameters of the ABH circular plate are shown in Table 2. The first-order resonant frequency and the coincidence frequency of the ABH circular plate can be calculated to be approximately 350 Hz and 2900 Hz according to LMS Virtural.Lab. Therefore, the calculated frequency of 0-10 KHz selected in this paper covers all characteristic frequency regions from the stiffness-controlled region to the damping-controlled region. 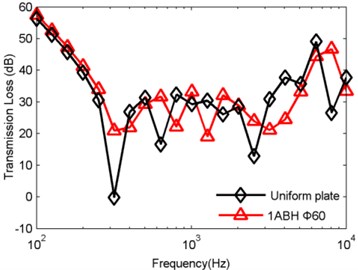 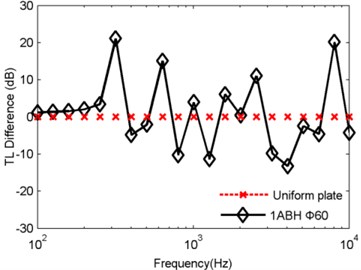 b) TL differences of the two plates