Copyright © 2020 Chong Ji, et al. This is an open access article distributed under the Creative Commons Attribution License, which permits unrestricted use, distribution, and reproduction in any medium, provided the original work is properly cited. 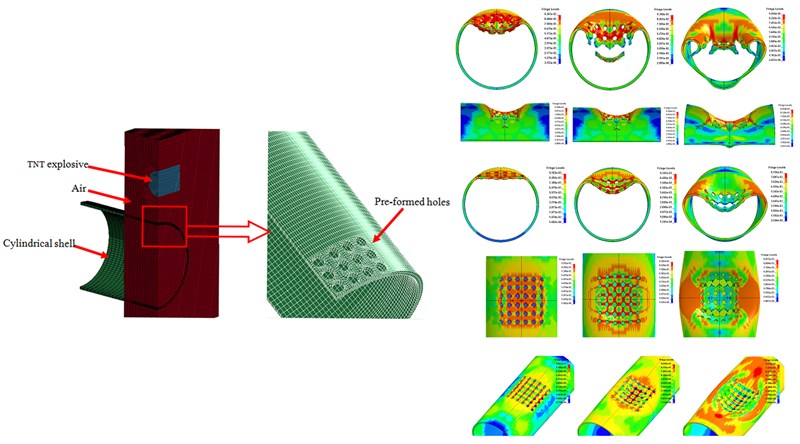 The metal pipe is widely used in the field of pipeline transportation for its unique configuration and function. In recent years, terrorist attacks and accidental bombings have occurred frequently all over the world. Various energy pipelines closely related to strategic and economic interests have become the targets of terrorist organizations. The cylindrical shell structure, which is used to transport liquid and gas in the pipeline network, will produce large plastic deformation and partial or whole fracture damage under the action of bomb fragments and shock wave. The combined load of shock wave and fragments that are caused by explosions will produce damage more severe than the sum of damage caused separately by shock wave and fragments. The anti-blast ability of the cylindrical shell under the combined action of shock waves and fragments should be investigated. The criteria of modified safety protection should also be constructed for the cylindrical shell structure with preformed holes.

In this paper, the nonlinear dynamic finite element program LS-DYNA and the fluid structure coupling algorithm are used to simulate the dynamic response forming mechanism of cylindrical shell with preformed holes subjected to explosive impacting. In order to provide reference for the safety protection of oil pipeline under the combined action of explosion and fragment, the preformed round hole is used to simulate the impact penetration effect of structure surface, observe and record the deformation and failure mode of cylindrical shell, and discuss the impact of stand-off distance on shell deformation.

The Johnson-Cook (J-C) material model was selected to model the cylindrical shell. The Von Mises yield stress is defined by:

where and indicate room and melting temperatures, respectively.

The damage of a material element is expressed as:

where is the increment of accumulated plastic strain that occurs during an integration cycle and is the fracture strain.

The Johnson-Cook fracture criterion is expressed as:

The Jones-Wilkens-Lee (JWL) equation of state (EOS) models the pressure generated by the expansion of the detonation product of the chemical explosion. It has been widely used in engineering calculations and can be written as:

As for the air, polynomial EOS is employed, in which the pressure is expressed as:

where is air density, is pertains to heat capacity ratio, and denotes the specific internal energy. In the simulation, Air mass density is 1.225 kg/m3, 1.4, 2.068

The results show that the steel cylindrical shell with openings has a large stress concentration at the openings subjected to the explosion impact loading, which results in impact damage. Compared with the cylindrical shell without holes, although the area of explosion is reduced, the strength of the cylindrical shell structure has a greater influence on the deformation mode at a smaller stand-off distance due to the whole strength reduction. The shell no longer has large deformation, but has whole displacement. When the stand-off distance is 1 cm, the detonation products and shock waves propagate to the upper surface of the shell, and the whole surface is impacted greatly. When the impact load strength exceeds the ultimate strength of the cylindrical shell with preformed holes, the axial and radial preformed holes in the central area of the shell face form a break-through crack; with the further action of the load, the crack gradually becomes larger until the shell forms a large area gap, which is rectangular in shape. The shell only deforms locally at this time. When the impact time is 300 μs, the whole deformation of the cylindrical shell gradually increases, and shows a relatively obvious whole deformation. The element at the edge of the break loses the constraint at one end, and it deforms violently under the action of shock wave and inertia. Some grid elements roll inward, as shown in Fig. 2 and Fig. 3. 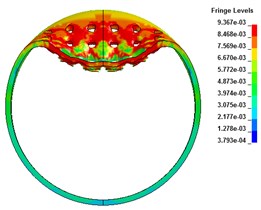 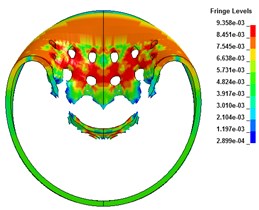 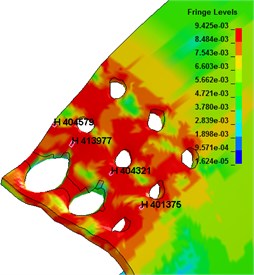 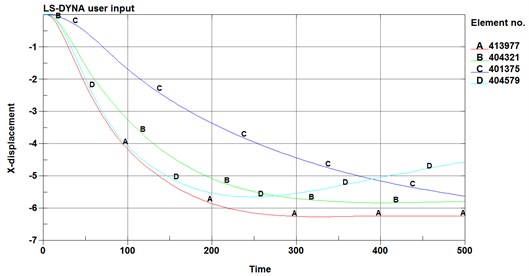 Fig. 5. The strain-time curve of the adjacent elements 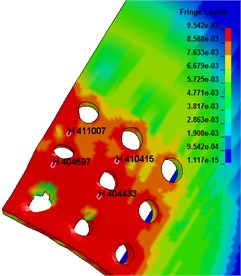 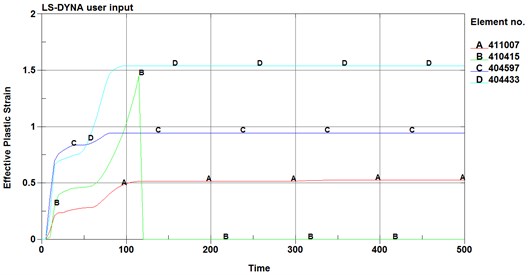 The displacement-time curve of cylindrical shell radial joint is shown in Fig. 4. The displacement of joints subjected to explosion impact loading is in the impacted direction, but some of them tend to move upward in the later stage due to the overturning of the break edge. Fig. 5 is the strain-time curve of the adjacent elements. From the figure, it can be seen that the strain near the second row of holes is much larger than that of the first row of holes, so it is more likely to cause unit failure and structural failure. In which, the failure of element B occurs near 120 μs, and the strain drops to 0. The reason for this phenomenon may be the difference of displacement of different rows of holes under shock wave load, and the pull between grid elements, which leads to serious grid deformation and great stress near the second row of holes, leading to grid failure near the second row of holes.

When the stand-off distance is adjusted to 3 cm, the wall of metal tube with preformed hole will produce local deformation of depression subjected to the explosive impact, and the shape of depression area is approximately elliptical. The preformed circular holes at the bottom of the axial plastic hinge of the blasting face are penetrated through, forming two radial through cracks. The crack shape is shuttle shaped, with large middle distance and small distance between the two ends. The thin-walled cylindrical shell only has local deformation, and the whole deformation is not obvious, as shown in Fig. 6 and Fig. 7. 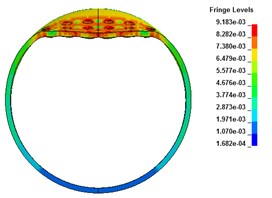 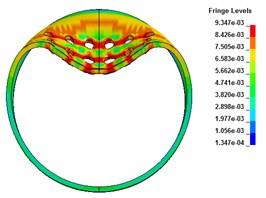 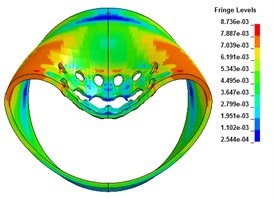 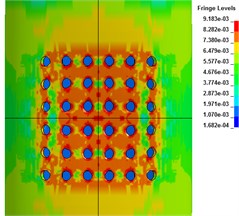 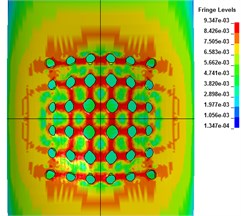 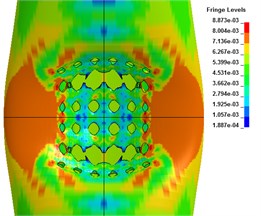 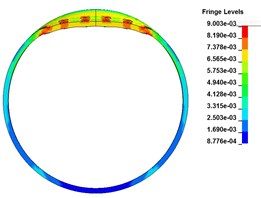 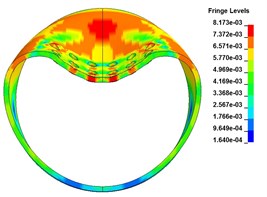 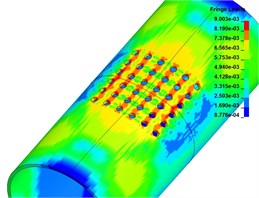 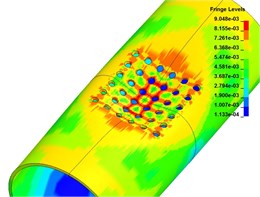 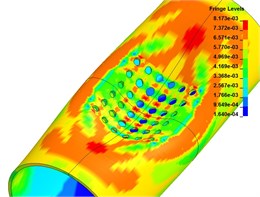 1) The ALE coupling model was able to capture the main trend of deformation and perforation failure of the cylindrical shell with preformed holes subjected to explosive impact loading in an adequate manner.