Bearing fault identification based on ASMOTE-CFR

Copyright © 2020 Huanke Cheng, et al. This is an open access article distributed under the Creative Commons Attribution License, which permits unrestricted use, distribution, and reproduction in any medium, provided the original work is properly cited.

Aiming at the problem of data unbalance caused by the lack of bearing failure test data, the paper proposes a collaborative filtering recommendation (CFR) method for adaptive Smote (ASMOTE) resampling and matrix decomposition of minority samples (ASMOTE-CFR). The method first adopts adaptive Smote method to synthesize different number of new sample equalization test data sets according to the data distribution. and then a variety of typical feature values such as time domain, frequency domain, time frequency domain, etc. are extracted to obtain the bearing feature matrix, and then a scoring matrix that accurately describes the bearing state is designed and based on the matrix Based on the decomposed collaborative filtering algorithm, a set of collaborative filtering recommendation system for bearing state recognition is proposed. Using this method, different forms of fault data on the outer ring of the rolling bearing were identified and verified. The accuracy of identification reached more than 98 %. Compared with the recognition accuracy of the collaborative filtering recommendation algorithm, this method improved 8 %.

During the operation of the wind turbine, bearing failure is the main failure of the wind turbine. If the timeliness of finding the bearing failure cannot be guaranteed, the operating life of the entire generator set will be greatly reduced, or even cause a major safety accident, so how to effectively identify the bearing The fault state has become one of the main contents in the field of fault diagnosis.

Motor bearings will generate huge amounts of data during monitoring. Normally, the normal sample data will be much larger than the fault sample. In recent years, many scholars have carried out research to improve the imbalanced learning problem [1-4]. Sampling Random Oversampling randomly copies a few samples to balance the class distribution; Jose et al. [5] proposed a Smote oversampling method. This method is not simply to copy its samples but there is a synthetic sample mechanism blindly so that the learning of samples is easy to cause overfitting.

At present, Collaborative Filtering (CF) is one of the most commonly used methods in the field of recommendation systems. The core idea is to predict user preferences through rating information of similar users or similar items [2, 6]. The paper [7-9] proposed a probabilistic matrix decomposition model, which describes the matrix decomposition process from the perspective of the probability generation process, effectively alleviating the problem of data sparsity.

Aiming at the difficulty of designing the scoring matrix of the recommendation system in the field of fault diagnosis, this paper first extracts the typical features from the time domain, frequency domain, and time-frequency domain to obtain the bearing feature matrix, and then constructs a set of accurate scoring matrices for the bearing state. Two matrixes with different characteristics are organically combined to obtain a joint scoring matrix for bearing state recognition. Based on the matrix filtering collaborative filtering algorithm and gradient descent optimization algorithm, a set of collaborative filtering recommendation systems for bearing state recognition is proposed.

2. CFR system based on ASMOTE

This article sets the number of new minority samples to be generated according to the balance of data distribution. The specific algorithm flow is as follows:

Step 1: Calculate the degree of unbalance. Recall that the minority sample is and the majority is , then the imbalance:

Step 2: Calculate the number of samples to be synthesized:

where is a parameter used to specify the desired balance level after generation of the synthetic data.

Step 4: Normalize for each minority sample obtained in Eq. (3):

Step 5: Calculate the number of synthesized samples for each minority sample:

Step 6: Randomly choose one minority data example, , from the nearest neigh bors for data . and synthesize according to the following equation:

Repeat the synthesis until the number of synthesis required by Eq. (5) is satisfied.

For the existing score records, the square of error is used to calculate the loss function of each score. The specific formula is as follows:

To prevent overfitting, regularization terms are added to the overall loss function:

where is the regularization coefficient, further, the gradient descent method is used to deal with the minimization problem, the core problem of the matrix factorization model is to minimize the overall loss function of the above formula by finding the appropriate parameters and .

3. Bearing fault identification based on ASMOTE-CFR

ASMOTE-CFR is based on the unbalance of data in massive data. First, the ASMOTE algorithm is used to equalize a few samples of faulty bearings. Further combined with the CFR method to design specific scoring rules to establish the corresponding scoring matrix, so as to effectively solve the problem of low accuracy in unbalanced data sets. Then extract the typical characteristic values in the time domain, the fuzzy entropy value in the frequency domain and the wavelet packet entropy value in the frequency domain to obtain the bearing feature matrix, and then design a scoring matrix that accurately describes the bearing state. Finally, these two matrices with different characteristics are organically Combined, a joint scoring matrix for bearing status identification is obtained. Based on the joint scoring matrix, the bearing status is effectively identified.

Suppose there are signal data of group of rolling bearings and there are different types of states) . In the signal data of group rolling bearings, it is assumed that the set of minority samples is , the set of majority samples is , represents the feature vector of the minority sample, and represents the feature vector of the majority sample. and here . Calculate the number of samples to be synthesized by , , and for the minority sample , use the Euclidean distance to calculate the nearest neighbor, and then randomly choose one minority data example, ,from the nearest neigh bors for data and synthesize according to . The sample data after ASMOTE will increase by certain percentage. Assuming that the data after ASMOTE has group, the state of the previous group of training data is known, and now the CFR is used to identify the state of the group of test data.

The entropy extraction is defined as follows.

Assuming that the energy corresponding to is , then:

Then the total energy of the signal is:

then the entropy is:

According to the information entropy, the fuzzy entropy in the frequency domain, the sample entropy, the IMF entropy of the EMD components in the time-frequency domain, and the wavelet packet entropy are obtained. Furthermore, the 32 feature extraction values are used as elements to construct a normalized feature vector as follows:

As shown in the Table 2, the maximum value of the corresponding state for the training data is 1 and the given state is recorded as the minimum value ( is a number infinitely close to 0), and for the test data , the score of the state is unknown, given a value of 0, and recorded as .

First use ASMOTE to take 423 groups of normal state samples as reference, oversample a few types of shaft current damage samples by 3 times, and finally get 255 groups of shaft current damage samples, and then further equalize the total 1470 groups of samples according to 6:2:2 ratio is randomly divided into a training set (882 groups), a cross-validation set (294 groups) and a test set (294 groups), and a state-of-the-art recognition is performed using a collaborative filtering recommendation system for bearing state recognition. 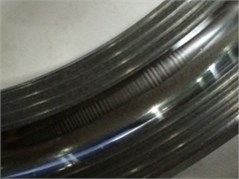 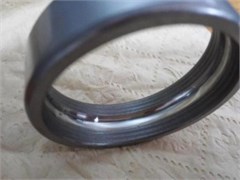 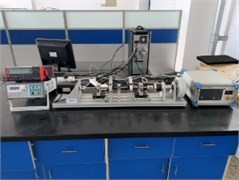 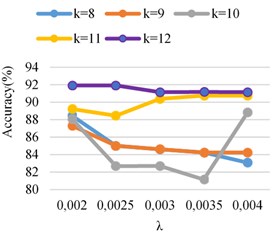 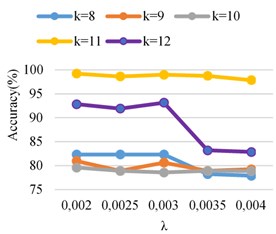 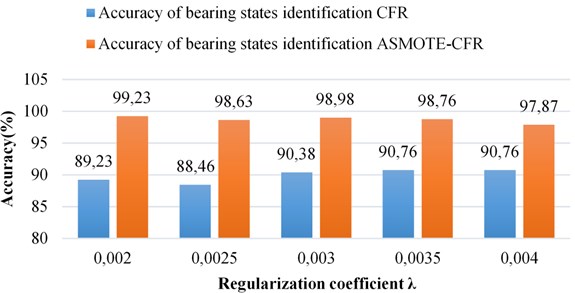 Taking 0.002 and 11 as examples, the Table 3 shows the specific recognition of the model for various states on the test set.

In this paper, the combination of adaptive synthetic minority oversampling technology (ASMOTE) and matrix decomposition-based collaborative filtering technology (CFR) is applied to the field of mechanical equipment fault recognition. For the identification of rolling bearing states, this paper oversamples a few types of shaft current samples by three times, then extracts 32 typical features in time domain, frequency domain, time frequency domain and other multi-domain states to construct a bearing feature matrix, and then designs an accurate description of the bearing status , And finally combine these two matrices with different characteristics organically to obtain a joint scoring matrix for bearing status identification. Experiments with different regularization coefficients and eigenvalues on bearings with pitting corrosion, cracks, and current damage on the outer ring of rolling bearings and normal bearings, the highest accuracy rate reached more than 98 %. Compared with CFR, the accuracy of method ASMOTE-CFR is improved by 8 %.