Copyright © 2020 Xuan Wang, et al. This is an open access article distributed under the Creative Commons Attribution License, which permits unrestricted use, distribution, and reproduction in any medium, provided the original work is properly cited.

Three configurations that incorporate a negative stiffness element and an inerter in parallel connection into the conventional isolator are considered to investigate their vibration characteristics from the point of view of resonance frequencies and displacement transmissibility. Analytical and numerical results are evaluated and compared with each other. It is illustrated that for the configuration of the inerter and an additional viscous damper in series connection which are then connected with the negative stiffness element in parallel, the isolator shows a better vibration isolation performance.

Passive vibration isolation techniques have always been popular and favoured by researchers because of their reliability, simplicity and low cost. Recently great attention has been given to two novel kinds of passive devices: negative stiffness elements and inerters [1, 2]. Both have become effective vibration suppression tools which have been demonstrated in many vibration control applications, including engineering structures, vehicle suspensions, railway vehicles, stay cables and etc. They all share a common property: a force-displacement relationship with an apparent negative slope.

A mechanical inerter is described as a two-terminal device with the property that it produces a force proportional to the relative acceleration between the end nodes. The constant of proportionality is called inertance with a unit of kilogram [7]. This device, a dual port element, completes the analogy between a spring-damper-inerter mechanical network and an inductor-resistor-capacitor electrical network. Also, an inerter, in a sense, is an inertial element. Nowadays the physical realizations of an inerter can classified into two categories, that is flywheel-based inerters [8, 9] and non-flywheel inerters [10, 11].

Although extensive investigations have been conducted on the vibration isolation characteristics of QZS-based or inerter-based isolators, separately, there is no literature addressing vibration isolation performance of an isolator incorporating a QZS and an inerter simultaneously, to the best of the authors’ knowledge. This paper investigates three linear isolators with parallel connection of quasi-zero stiffness and inerter dampers under base harmonic excitation. Their natural frequencies and displacement transmissibility, as a function of the isolator parameters, are evaluated and compared with each other.

In this section, the ordinary differential equations as well as the expressions of displacement transmissibility for each studied isolator under base excitation will be presented. Subsequently, some numerical results will be shown and compared with each other in next section.

This isolator with the model 1 incorporates an inerter and a negative stiffness element in parallel connection directly into a conventional isolator, as shown in Fig. 1. The governing equation is expressed as:

where is the amplitude of the base motion . Eq. (1) can be written as:

where the primes denote derivatives with respect to non-dimensional time .

The displacement transmissibility of this isolator is given by:

Additionally, Eq. (2) can be rewritten as:

where (or ) and are the undamped natural frequency and damping ratio of the isolator, respectively; They have the following expressions as:

Fig. 1. An isolator () with direct parallel connection of QZS and an inerter 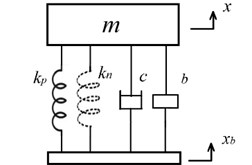 Fig. 2. An isolator () with a damper in series connection with the inerter 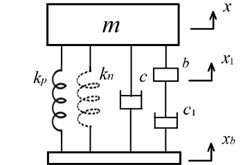 This isolator with the model 2 uses a damper in series connection with the inerter, as shown in Fig. 2, and is denoted as (). It has an additional degree of freedom , which has an equation of motion as follows:

Additionally, the displacement transmissibility of this isolator is given by:

This isolator with the model 3 uses a positive stiffness element in series connection with the inerter, as shown in Fig. 3, and is denoted as (), which has an equation of motion as follows:

where the non-dimensional parameter . The displacement transmissibility of this isolator is given by:

Fig. 3. An isolator () with a spring in series connection with the inerter

Fig. 4 shows the effect of and on for (), and Fig. 5(a) and (b) give and views of Fig. 4, respectively, which illustrate that the undamped natural frequency is a decreasing function with respect to and ; moreover, is more sensitive dependence on compared to . Fig. 6 and Fig. 7 show the root-locus plot of () and () with respect to different for 1.0 and 0.1 as , , respectively. From results shown as in these figures, it is found that (1) () may achieve a lower undamped natural frequency with relative ease compared with () and (); (2) vibration characterises of () are more sensitive dependence on compared with those of (); relatively speaking, the former normally has a low undamped natural frequency and a high damping ratio and the reverse is true for the latter. 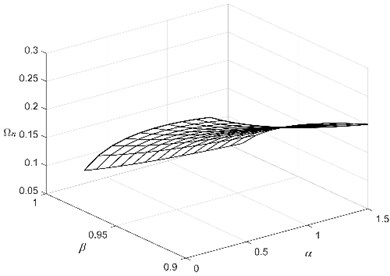 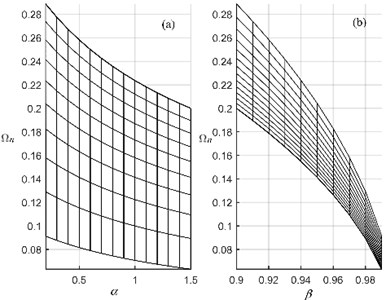 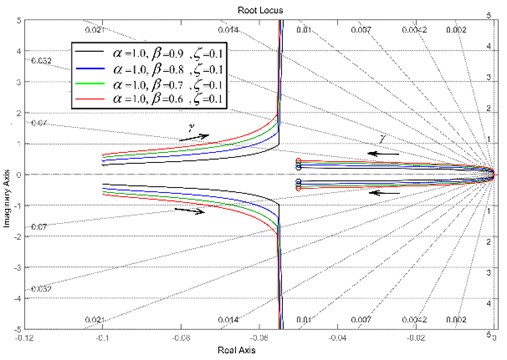 Fig. 8. Transmissibility of () with different and and given 0.95 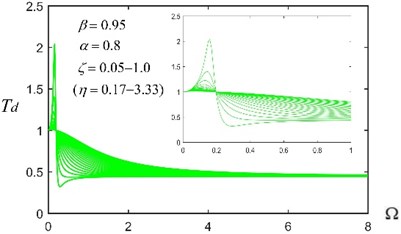 Fig. 8, Fig. 9 and Fig. 10 give the displacement transmissibility of three isolators with different, , and for a given 0.95, respectively. It is found that (1) when becomes larger, the of () will not tend to zero, which is totally different from () and (); (2) () has two resonant frequencies (or characteristic roots), and the frequency band for effective vibration isolation is influenced by the position of the larger frequency; (3) () has better comprehensive vibration isolation performances in terms of the suppression of low and high frequency-excited vibration and an appropriate resonance peak value, compared with () and ().

Fig. 9. Transmissibility of () with different and and given 0.95 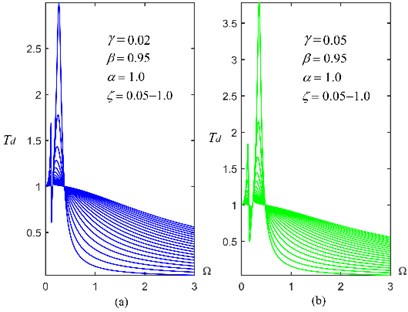 An isolator incorporating a negative stiffness element and an inerter in parallel connection into a conventional isolator can achieve a much lower natural frequency, compared with the corresponding isolator with the addition of a negative stiffness or an inerter only. The isolator () exhibits some better vibration isolation performances. Future researches will be conducted to other vibration characteristics, such as the shock isolation performance.