Copyright © 2018 Chun Cheng, et al. This is an open access article distributed under the Creative Commons Attribution License, which permits unrestricted use, distribution, and reproduction in any medium, provided the original work is properly cited.

In order to attenuate low-frequency vibration, a novel nonlinear vibration isolator with high-static-low-dynamic stiffness (HSLDS) is developed in this paper by combining the negative stiffness corrector in parallel with a vertical linear spring. The force and stiffness characteristics are first derived by the static analysis. Then, the displacement transmissibility of the HSLDS system is obtained to evaluate the isolation performance using the harmonic balance method. The parametric analysis shows that the proposed HSLDS system can outperform the equivalent linear one in some aspects. Besides, the initial isolation frequency is defined and further investigated with the purpose of providing some useful guidelines for choosing parameter combinations conveniently. Finally, a prototype is developed and the experimental test is conducted to verify the isolation performance of the proposed HSLDS system.

The rest of this paper is organized as follows. In Section 2, the static characteristics of the proposed vibration isolator are analyzed in detail. In Section 3, the displacement transmissibility is obtained to evaluate the isolation performance of the HSLDS vibration isolator. In Section 4, the initial isolation frequency is defined with the purpose of providing some useful guidelines for choosing parameter combinations conveniently. The experimental test is conducted to verify the isolation performance of the proposed HSLDS system in Section 5. Conclusions are drawn in Section 6.

2. Modeling of an HSLDS vibration isolator

The physical model of the proposed HSLDS vibration isolator is shown in Fig. 1. The negative stiffness corrector is mainly comprised of horizontal springs, hinge axes, connecting rods and brackets. Both ends of each connecting rod are hinged with the bracket and the hinge axis, respectively. All of the connecting rods are of the same length . Besides, both ends of the horizontal spring are connected with hinge axis. The loading support can only move in the vertical direction due to the existence of the guide mechanism. When the loading support carries a load , the vibration isolator is initially balanced in the static equilibrium position where all of the connecting rods are located on the same horizontal plane. Thus, the load is only supported by the vertical spring with static deflection , where and denote the gravity of load and the vertical spring stiffness, respectively. Meanwhile, to achieve the negative stiffness, the horizontal spring is stretched at the static equilibrium position with pre-stretch length and stiffness . When the load oscillates about the static equilibrium position, the connecting rods will deviate from the horizontal plane. As a result, the stretching force can be transmitted to the loading support through the connecting rods, and its direction is opposite to that of the restoring force generated by vertical spring. Thus, the dynamic stiffness of the vibrating system is reduced with static stiffness unaffected. With structural parameters properly designed, the HSLDS characteristic can be achieved.

To understand more about the negative stiffness corrector, the force and stiffness characteristics are analyzed subsequently. With the payload, the schematic diagram of the static analysis at equilibrium position is shown in Fig. 2(a). When the vibration isolator is subjected to a force , the loading support deviates from the static equilibrium position by a displacement , as shown in Fig. 2(b). Note that the magnitude of the restoring force of the system equals to the applied force, but in opposite direction. 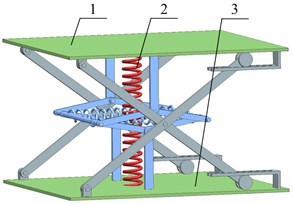 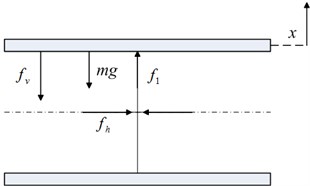 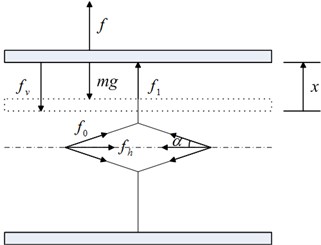 When the loading support deviates from the static equilibrium position by a displacement , the relationship between the applied force and the displacement is given by:

Eq. (2) can be written in a non-dimensional form for simplicity:

The stiffness at static equilibrium position can be derived by substituting into Eq. (4):

If the stiffness of the HSLDS vibration isolator at static equilibrium position is zero, the QZS characteristic can be obtained. The QZS condition is given by:

The non-dimensional force-displacement and stiffness–displacement curves for various when are shown in Fig. 3. It can be observed that the minimum stiffness corresponds to the static equilibrium position. The magnitude of the stiffness is getting smaller with the increase of . When is not greater than 1, the minimum stiffness is positive. As increases to 1, the minimum stiffness becomes zero, and thus the QZS characteristic is achieved. If increases further, such as , the negative stiffness occurs in the vicinity of the static equilibrium position, which is undesirable in engineering practice. In order to avoid an unstable system, the stiffness ratio should not be greater than . The case of is mainly considered in this work. 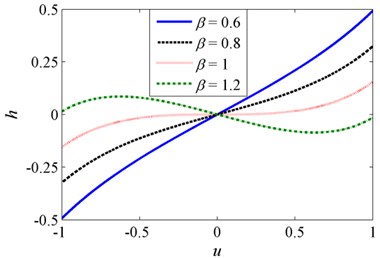 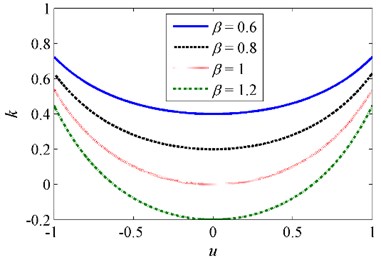 With the purpose of simplifying the subsequent dynamic analysis, Eq. (3) can be further expanded as a third-order Taylor series about when the oscillation amplitude is relatively small:

Then the approximate stiffness of the HSLDS system is given by:

Fig. 4. Comparison of the exact and approximate force-displacement curves for and 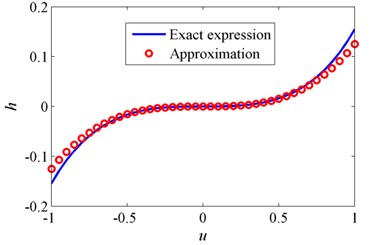 The absolute displacement transmissibility [5], which is defined as the ratio between the absolute displacement amplitude of the load and the base excitation amplitude, is used to evaluate the isolation performance of the HSLDS vibration system. A harmonic base excitation is applied to the base plate, where and denote the excitation amplitude and the frequency, respectively. Considering the linear viscous damping, the equation of relative motion of the load is governed by:

where is the relative displacement between the load and the base plate, and is the restoring force defined by Eq. (2). Writing Eq. (9) in a non-dimensional form yields:

and where the dots denote derivatives with respect to . Replacing the exact restoring force with its approximate one defined by Eq. (7). Thus, the dynamic equation can be approximately given by:

In order to obtain the steady-state solution, the harmonic balance method (HBM) [5] is employed here. The first-order approximate solution is assumed to be the following form:

where and denote the amplitude and the phase of response, respectively. Substituting Eq. (11) into Eq. (10) and equating the coefficients of the terms containing and separately to zero can lead to the following equations:

Therefore, the amplitude-frequency equation can be obtained with the application of :

To verify the feasibility of the approximation of restoring force and the HBM, a numerical method based on the fourth-order Runge-Kutta scheme is applied. Then the fast Fourier transformation (FFT) is utilized to obtain the basic harmonic component of the response. The amplitude-frequency curves obtained by two methods are shown in Fig. 5. It can be observed that there is a good agreement between the analytical solutions and the numerical ones of Eq. (10) and Eq. (11), demonstrating that the approximation of restoring force and the HBM are feasible. Note that the numerical method can only simulate stable solutions [15]. As a result, the steady-state solutions located at the unstable region cannot be obtained by the numerical method. 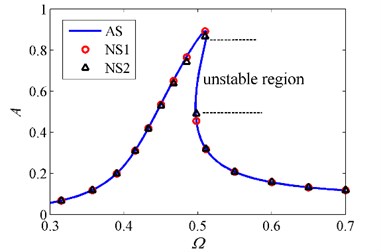 The absolute displacement of the load is given by:

Then the amplitude of the absolute displacement can be expressed as:

where is given by Eq. (13a). Therefore, the absolute displacement transmissibility can be written in the form of decibel:

Fig. 6. Absolute displacement transmissibility for various excitation amplitudes when , and 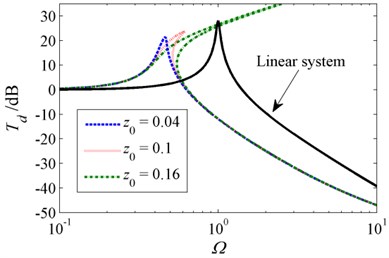 Fig. 7. Absolute displacement transmissibility for various damping ratios when , and

Fig. 8. Absolute displacement transmissibility for various stiffness ratios when , and 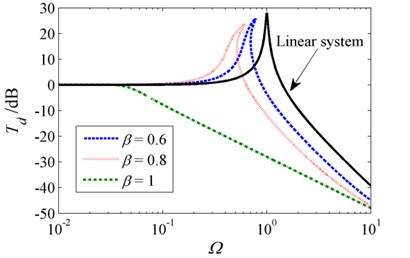 Setting in Eq. (17) to zero yields the following equation:

Combining Eq. (13a) and Eq. (19) can obtain the relationship between and the amplitude :

In order to obtain the jump-down frequency [27], differentiating both sides of Eq. (14) with respect to A and setting yield: 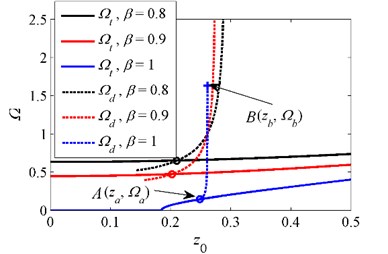 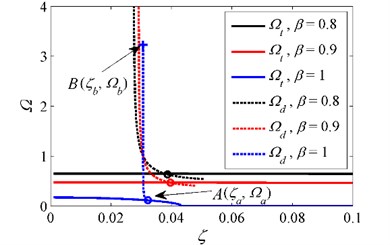 The aforementioned analysis indicates that adjusting the excitation amplitude to a lower level or applying a greater damping can lead to a lower initial isolation frequency and avoid the unbounded response. If the parameter combinations are properly selected, the HSLDS system can even achieve whole-frequency vibration isolation. 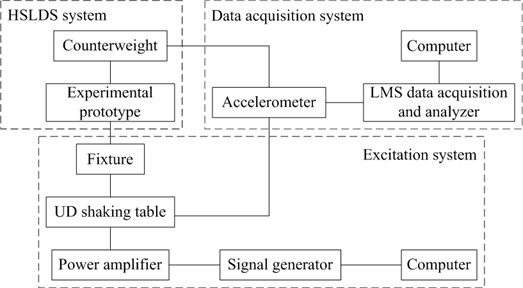 Table 1. Parameters of the experimental prototype. 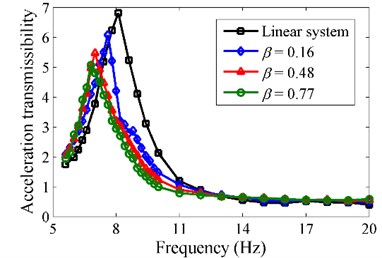 In this study, a novel HSLDS vibration isolator with scissor-like structure is developed. The force and stiffness characteristics are first investigated by the static analysis. Then the absolute displacement transmissibility of the HSLDS system is obtained based on the HBM. It is demonstrated that increasing the excitation amplitude can deteriorate the isolation performance. Although increasing the damping ratio is beneficial for the suppression of transmissibility in the resonant region, the performance in higher frequencies can be deteriorated. Besides, choosing a greater stiffness ratio can obtain a wider isolation frequency band. The HSLDS vibration isolator outperforms the equivalent linear counterpart when the excitation amplitude is not too large.