Copyright © 2021 Dan Pang, et al. This is an open access article distributed under the Creative Commons Attribution License, which permits unrestricted use, distribution, and reproduction in any medium, provided the original work is properly cited.

Accurate calculation of the ampacity of underground cables is an important prerequisite for ensuring the safe and economical operation of cables, the realization of this goal mainly depends on the accuracy of the calculation of the external thermal resistance of the cable. The accuracy of numerical method is high but slow calculation speed, the analytical algorithm (IEC standard supply) is fast, but the calculation error is large when dealing with the non-uniform soil problems with poor heat conduction performance backfill soil. In this paper, the external thermal resistance of cable is calculated by finite volume method and equivalent thermal circuit method, substitutes the calculation result into the analytical calculation formula, which can quickly and accurately calculate the ampacity of the cable group. This method is faster than the pure numerical method, and which is more accurate than the analytical algorithm. The superiority of this method is proved by comparing with analytical algorithm, coordinate combination method and field-circuit combination method in uniform and non-uniform soils.

The calculation methods of cable ampacity can be divided into analytical method and numerical method, the former refers to the IEC-60287 standard recommended by the International Electrotechnical Commission [1], the equivalent thermal circuit method provided by this standard has a fast calculation speed, but the calculation error is larger in the non-uniform soil environment containing backfill soil with poor thermal conductivity; the latter calculation of the cable ampacity is based on the calculation of the temperature field, with high accuracy but slower speed. Common methods mainly include: finite element method [2-4], boundary element method [5], finite difference method [6, 7] and simulated heat charge method [8].

According to the principle of equivalent thermal circuit, the analytical calculation formula of cable ampacity is given in IEC standard [1]:

Fig. 1. All of the equivalent thermal roads of cable

If a total of cables are laid, the buried depth of a certain cable is , and the thermal resistance coefficient of the soil adjacent to the cable group is , then the of the cable is [15]:

In Eq. (3),, , is the depth from the ground to the center of the backfill, is the equivalent radius of the backfill. If and are used to represent the length and width of the backfill area, can be expressed as: , and are the thermal resistance coefficients of soil and backfill which is cement precast parts, K·m/W.

Calculations by previous researchers have shown that when the laying environment is non-uniform soil, the calculation error caused by the above correction method to calculate the external thermal resistance coefficient of the cable will increase with the increase of the backfill soil and the number of cable circuits. Therefore, this method has great limitations in dealing with the ampacity of the cable group in a complex laying environment.

3. The new method proposed in this article

In this paper, combining the advantages of the equivalent thermal circuit method and numerical calculation method, a new method for calculating the ampacity of the cable group is proposed. The implementation process of this method is as follows.

(1) Given a load current value , adopt the numerical method of literature [13] to calculate the steady-state temperature field of the cable group corresponding to the current value.

(2) Take several concentric “soil layers” with equal thickness on the outside of the cable, and calculate its thermal resistance as ( is the total thickness of soil layer).

(3) As shown in Fig. 2, calculate the average temperature [16] of the outermost soil layer using the quadratic interpolation method.

(4) Replace and in Eq. (2) with and respectively, and calculate the cable core temperature .

(6) Substitute the obtained external thermal resistance of each cable into Eq. (4), calculate the maximum long-term operating current allowed by each cable, and select the minimum value as the ampacity of the cable group.

Fig. 2. Temperature of the soil near the cable 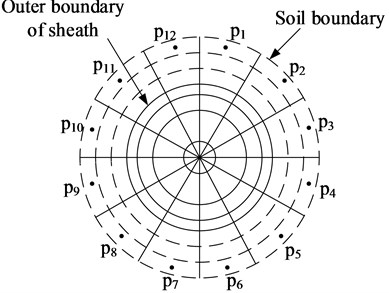 In order to verify the accuracy and efficiency of the new method in this paper, calculate the ampacity of 66 kV single-circuit and double-circuit XLPE insulated power cables under two working conditions of uniform soil and back filled sand soil. The cable is made of copper core, and the length is 800 m, and the aluminum sheath is grounded by cross interconnection method. The nominal cross section is 630 mm2, the soil ambient temperature is 25℃ when the uniform soil is laid, and the soil thermal resistance coefficient is 1.2 K∙m/W. What’s more, the laying method of backfill sand soil is shown in Fig. 3 and the thermal resistance coefficient of sand soil is 3.33 K∙m/W.

Fig. 3. The laying-manners of 66 kV cable with single and double circuits when backfilling sand soil 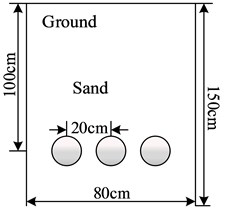 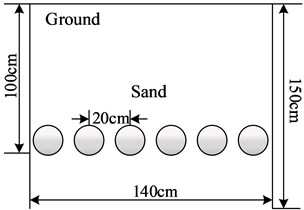 Table 1 shows the case of laying and backfilling sand soil in uniform soil, the analytical method, coordinate combination method, field-circuit combination method and the new method are used to calculate the results of the cable ampacity under the above working conditions. Since the analytical method can accurately calculate the ampacity of cable in uniform soil, it can be used as a standard to verify the accuracy of other methods. In Table 1, and are the ampacity of single, double-circuit cables respectively, and and are the calculation time of single, double-circuit cable current-carrying capacity respectively.

The work was supported by the Science and Technology Project of State Grid Jilin Electric Power Limited Company under the Grant 2018-01.