Detection of lane line based on Robert operator

Copyright © 2021 Yangzhe Wei, et al. This is an open access article distributed under the Creative Commons Attribution License, which permits unrestricted use, distribution, and reproduction in any medium, provided the original work is properly cited.

Based on edge detection. MAMTA et al. [2] proposed a robust edge detection algorithm based on multiple thresholds, which can better deal with the edge continuity and thickness uniformity of the image. Zhou Fang et al. [3] proposed an edge detection operator with direction. This operator has fewer broken lines and low noise in the process of road edge extraction, and has obvious advantages in the extraction of linear landmarks. Kong et al. [4] improved the Canny algorithm and proposed an adaptive edge detection model to achieve better edge detection accuracy and robustness. Sun Qingfeng [5] used a wavelet transform edge detection method to extract image edge features, which effectively resolved the contradiction between edge location and noise. Xu et al. [6] proposed a sparse edge-preserving image denoising method, which improves the denoising effect of a single noise. Chen Zhuan et al. [7] used the advanced Sobel operator and zernike moment image to detect the route contour of the remote sensing image, and processed the edge information of the image better, but there were still some defects in the edge connectivity. Han et al. [8] used mathematical morphology operators and gradients to extract edge pixels of grayscale images, which improved the processing effect of Gaussian noise and salt and pepper noise. HEY et al. [9] proposed an image edge detection algorithm based on improved morphological gradient, which can accurately extract image edge information. Yang Donghua et al. [10] studied the construction of the LOG template in the Marr edge detection algorithm, and obtained a wealth of image edges, and the continuity of the edges was good. Tan Yuan et al. [11] carried out edge detection on remote sensing image roads based on the improved Sobel operator, and detected that the edge lines of the roads were smooth and complete, with clear contours and good continuity.

Edge is the most basic feature of an image. Edge detection plays an important role in computer vision, image analysis and other applications. This is because the edges of the image contain useful information for identification. The purpose of image edge detection is to remove excessive interference information in the image, retain the main information of the target object, and greatly reduce the number of white spots in the image. The edge of the object in the digital image reflects the large difference in the gray value of adjacent pixels, and these differences mainly include changes in the form of steps and pulses.

In an image, if the gray value change between adjacent points is small, the amplitude of the gradient will be small, and on the contrary, the amplitude of the gradient will also be large. Therefore, the edge pixel position of the image can be obtained by calculating the derivative. In the actual image during processing, often using a small convolution template to replace the partial derivatives of by-pixel operation. According to the structure of the template, a variety of first-order edge detection operators can be constructed.

The commonly used first-order operators are as follows:

Robert operator is also called cross differential algorithm. It is a gradient algorithm based on cross difference. It detects edge lines through local difference calculation. It is commonly used to process steep and low-noise images. When the edge of the image is close to plus or minus 45 degrees, the processing effect of this algorithm is more ideal. The disadvantage is that the edges of the extracted image are rough.

Sobel operator is a discrete differential operator for edge detection, which combines Gaussian smoothing and differential derivation. This operator is used to calculate the approximate value of the brightness of the image. According to the brightness of the edge of the image, the specific points in the area exceeding a certain number are recorded as edges. The Sobel operator adds the concept of weight on the basis of the Prewitt operator. It is believed that the distance between adjacent points has different effects on the current pixel. The closer the pixel point corresponds to the greater the impact of the current pixel, so as to achieve image sharpening and highlight the edge contour.

The Sobel operator detects the edge by reaching the extreme value at the edge according to the weighted difference of the gray scale of the upper and lower pixels and the left and right adjacent points. It has a smoothing effect on noise and provides more accurate edge direction information. Because the Sobel operator combines Gaussian smoothing and differential derivation, the result will have more noise resistance. When the accuracy requirements are not very high, Sobel operator is a more commonly used edge detection method.

Sobel edge operator more accurate positioning sub, commonly used in much noise, shades of gray image. The algorithm template is shown in Eq. (3), where represents the horizontal direction and represents the vertical direction:

The Canny algorithm is the best solution between suppressing noise and accurately retaining edge features [12, 13]. Canny edge detection is actually a first-order differential operator detection algorithm, which uses the step property of the image at the edge, that is, the characteristic that the image gradient obtains a maximum value at the edge for edge detection. Gradient is a vector, it has direction and modulus: 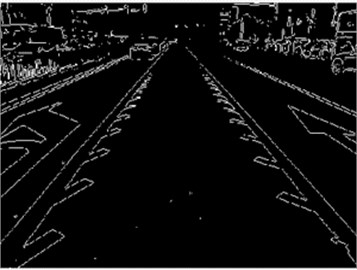 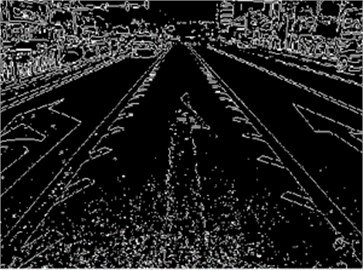 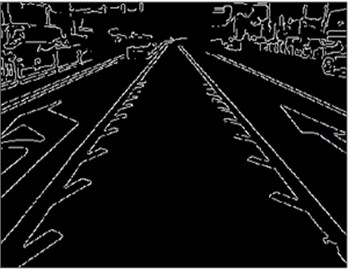 This article is based on the Hough transform lane line extraction. The specific detection process is shown in Fig. 2. 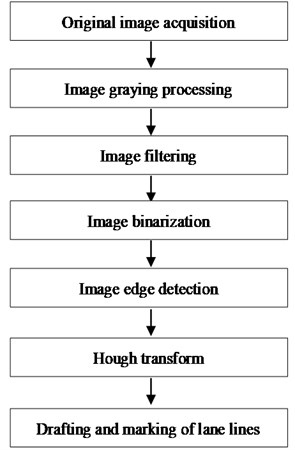 During the driving of the car, the camera converts the captured optical image into a digital signal, which is sent to the image capture card for digital processing. This article uses the Sony HDR-XR520E monocular high-definition camera to collect the original lane line map. Install the camera in the middle of the front windshield and adjust the shooting angle of the lens until the lane line is in the middle of the image. The original image collected is shown in Fig. 3(a).

The images collected by the vision sensor are mostly color images. Since the three-channel model of color image contains a lot of information that has nothing to do with the detection target, it is time-consuming to process and the real-time performance will be reduced. Therefore, this article converts the collected road color image into a grayscale image, which is equivalent to subtracting two-thirds of the original data, and the lane line description information is retained in the grayscale image, which can meet the needs of lane line detection. Most color images now use the RGB color mode. When processing the image, the three components of R (red), G (green), and B (blue) must be processed separately. Herein gradation processing using the image component method: 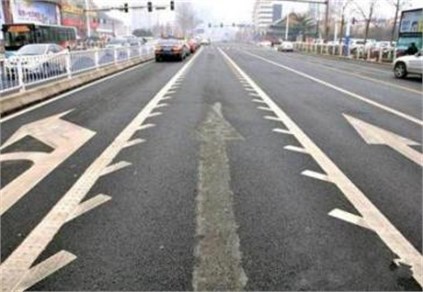 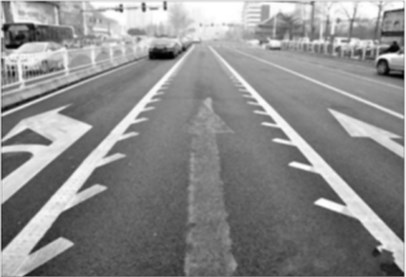 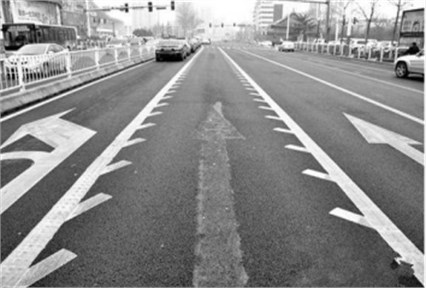 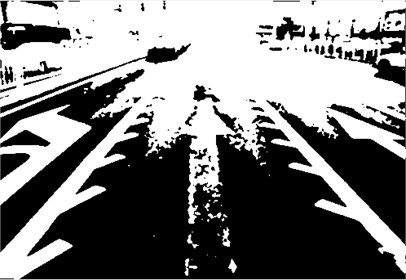 Image filtering, that is, suppressing the noise of the target image while preserving the details of the image as much as possible, is an indispensable operation in image preprocessing, and its processing effect directly affects the effectiveness and reliability of subsequent image analysis. Median filtering is based on the value of the central point position of this sequence is replaced with the median value of the point field. Its advantages are simple operation, fast speed, and good denoising effect.

Image binarization is the process of setting the gray value of the pixels on the image to 0 or 255, that is, the entire image presents an obvious black and white effect. In digital image processing, binary image occupies a very important position, binary image of the image in order to reduce the amount of data, which can highlight the contour of an object.

In MATLAB, the image binarization function is bw_pic=im2bw(filter2 pic). The binarized image is shown in Fig. 3(d). The outline of the road line of the image is clearer and becomes white, while the non-road markings are made black. 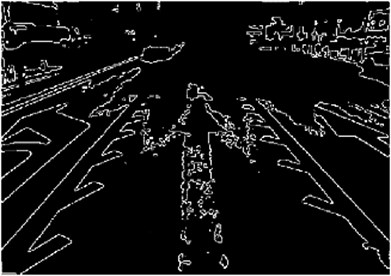 Hough transform is a feature extraction, which is widely used in image analysis, computer vision and digital image processing. Hough transform is used to identify features in objects. The algorithm flow is roughly as follows. Through the rough outline of the image and the recognition of the graphics, the algorithm will perform voting in the parameter space to determine the shape of the object, and this is determined by the local maximum in the accumulation space.

In MATLAB, the function for Hough transform processing is [H,T,R]=hough(verge_pic), H is the X-axis data, T is the Y-axis data, and R is the initial magnification value of the image. The image through the Hough transform is shown in Fig. 5(a) and 5(b) are the Hough transform after edge detection of Roberts operator and Canny operator. It can be seen from the figure that only the coordinate value of the right point of the two pictures differs by 1, and the other values are all Unanimous.

7) Drawing and marking of lane lines. 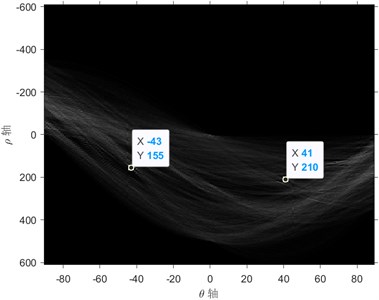 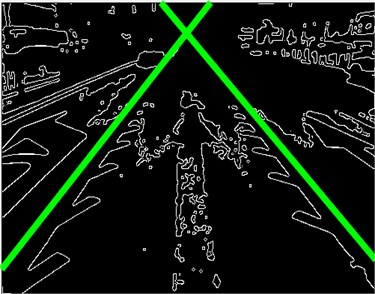 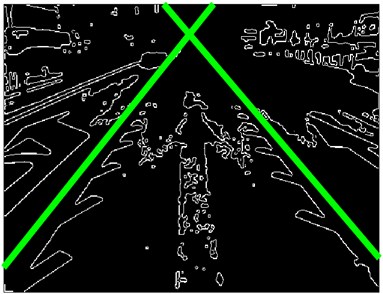 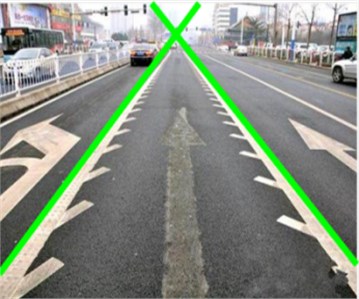 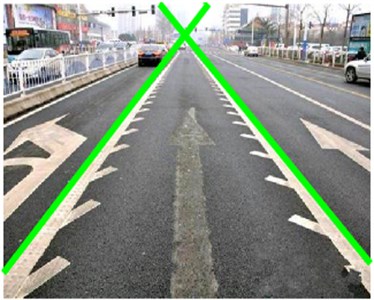 After comparison, it is found that the image detected by the Robert operator and the detected image processed by the Canny operator have little difference between the Hough transform, lane line extraction and lane line labeling, and both can clearly show the lane. The position of the line. Therefore, the integration of the Robert operator is the same as the traditional Canny operator, which can realize the detection of lane markings.

4.1. Comparison of the similarity of the test images

Import the two pictures a) and b) in Fig. 7 into the program in MATLAB, and the comparison results are shown in Fig. 8. 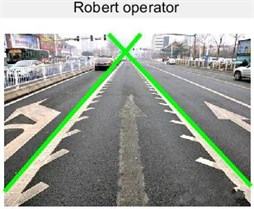 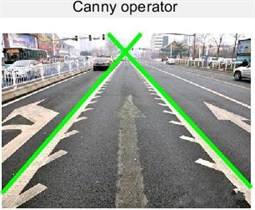 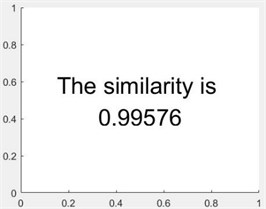 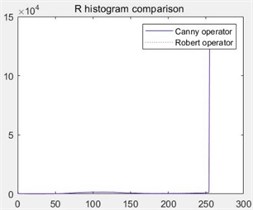 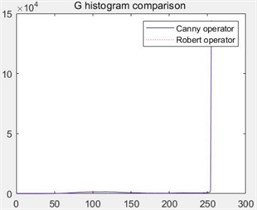 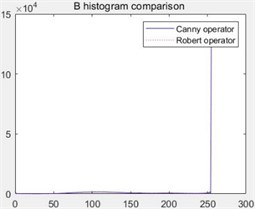 From the data in the table, we can see that the time used for each test fluctuates compared with the last time. The time used for 100 test runs is averaged, and the processing is shown in Table 3.

Due to the shortening of the lane line detection time, the lane line can be quickly detected during the driving process of the vehicle, which improves the operating efficiency of lane line recognition and increases the safety of vehicle driving.