Copyright © 2022 Zhiwei Huang, et al. This is an open access article distributed under the Creative Commons Attribution License, which permits unrestricted use, distribution, and reproduction in any medium, provided the original work is properly cited.

The previous research shows that under longitudinal excitation, the thrust bearing is the main transmission path of stern vibration. If vibration control measures are taken at the thrust bearing, better results can be obtained for stern vibration control. To solve this problem, Dylejko et al. [1] carried out the vibration isolation analysis and optimization design of resonance changer in shafting shell coupling system on the basis of Goodwin [2]. Merz et al. [3, 4] studied the influence of active passive hybrid control system composed of resonance changer and distributed active vibration absorbers on shafting vibration and hull sound radiation. Zhang et al. [5] designed a low-frequency mounting system (LFMS) with floatable self-alignment thrust bearing to reduce the longitudinal vibration of shafting. Experiments showed that LFMS has an obvious vibration isolation effect above 10 Hz.

Due to the characteristics of small internal space, large variation of lubricating oil temperature, large thrust force and complex working conditions of thrust bearing, higher performance requirements are necessary for the isolation elements in thrust bearing. Compared with other types of springs, such as coil springs, leaf springs, etc., disc springs have the advantages of high stiffness, small stroke and easy replacement. Meanwhile, different stiffness values can be obtained through different combination forms, which is convenient to meet the design requirements in engineering. It is a more suitable isolation element.

Fig. 1. The schematic diagram of a shafting

The material parameters and stiffness parameters are shown in Table 1. A preliminary calculation with finite element method shows that only when the stiffness of the isolation element meets 0.2e9 N/m 0.4e9 N/m, the longitudinal static deformation and vibration reduction effect of the shafting can satisfy the design requirement.

The relationship between the applied load and displacement of disc spring can be calculated by A-L (Almen Laszlo) method:

Fig. 2. A schematic diagram of a disc spring

Therefore, the relative deformation of single disc spring is:

From the above analysis, the overall stiffness of disc spring group, and the relative deformation of single disc spring under different combination forms can be obtained.

According to the relevant requirements of the shafting design, the first-order longitudinal vibration natural frequency of the shafting will not exceed certain value. For the static performance, it is also necessary to ensure that the disc spring will not produce excessive static deformation under the static excitation. The total target stiffness of the disc springs could be set within 0.2e9 N/m 0.4e9 N/m. In actual practice, the relative deformation of single disc spring is required to be between 20 %-75 %, so as to ensure its good linearity.

According to the above design requirements and referring to the size of the thrust disc in this design, the outer diameter of the disc spring is limited within 110 mm. The number of superimposed disc spring is required to be as few as possible to reduce the influence of friction. Selected from GB/T 1972-2005 A series, the results meeting the design requirements are shown in Table 2.

When is an even number, the upper and lower bearing surfaces shall contact the outer periphery of the disc spring to increase the contact area and maintain the stable and reliable operation of the disc spring group. Therefore, the specific combination form of scheme I is shown in Fig. 3.

Fig. 3. Schematic diagram of disc spring combination in scheme I

In the disc spring combination scheme obtained from the national standard selection, the disc spring has the form of superimposed, which will be greatly affected by the friction in the actual working condition. Therefore, it is necessary to design a scheme with only involution and no superposition. According to the A-L method, if is kept small, the disc spring with good linearity can be designed. Appropriate adjustment can be made according to the size proportion of series A disc spring to design a disc spring combination that meets the performance requirements without superposition. Take 16, 0.6, 0.4, and thickness at an interval of 0.1 mm, and take it from 0.1 mm to 10 mm to obtain the specifications of a new series of disc springs. The relationship between the single piece stiffness and thickness of this series of disc springs can be calculated by A-L method, as shown in Fig. 4.

According to the design requirements in the previous section, the results meeting the requirements can be obtained, as shown in Table 3.

When the disc spring groups are fully pressed, the increment of the longitudinal static deformation of the shafting is the largest, 2.72 mm. 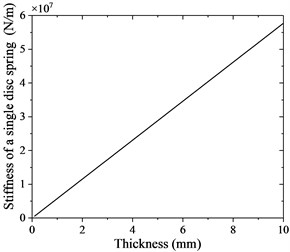 To check the vibration reduction performance with the introducing of the disc springs in the thrust bearing, a unit longitudinal excitation force of 0-200 Hz is applied at the propeller, and the longitudinal vibration responses of the observation point at the thrust bearing base are calculated. The frequency response curve and power flow level curve of the two schemes at this observation point are shown in Fig. 5 and Fig. 6 respectively. 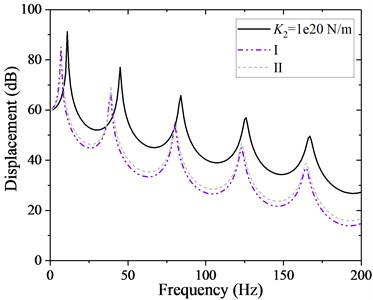 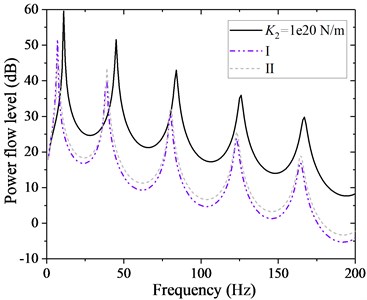 It can be seen from the figures that after the disc spring isolation thrust bearing is adopted, the response peaks of each order on the thrust bearing base move to the low frequency region, and the peaks of the response are significantly attenuated, about 10 dB, compared with those without disc springs installed. In terms of the vibration reduction effect, scheme Ⅰ is slightly better than scheme Ⅱ. It is should be pointed out that scheme Ⅰ adopts the form of superposition of discs, so that the performance of disc spring will be greatly affected by the friction between the superposition disc surfaces, also, the increment of shaft longitudinal deformation is greater for scheme Ⅰ. The comparison of advantages and disadvantages of two schemes is shown in Table 5, which can be selected according to the engineering requirements.

Table 5. Comparison of advantages and disadvantages of the two schemes

Aiming at the control of low-frequency vibration at the stern of surface ship, a thrust bearing integrated with internal disc springs is proposed. By the static and dynamic analysis of the shafting with disc springs as vibration isolation element, a feasible scheme of disc spring group is formed. The following conclusions are drawn: